The actual traveling part of traveling is pretty boring. How exciting can 12 hours in a plane be? Well, I guess it could be pretty exciting, in a “Lost” sort of way, but then I probably wouldn’t be here writing about it.

We had a 4:40pm flight from SFO to London. Neither of us had eaten lunch because we’d planned on just eating in the British Airways lounge. While I mentioned in the earlier post that Dan’s work travel isn’t fun for him per se, it has earned him some frequent flyer perks that at times I will get to benefit from as well. Being able to wait for your flight from the lounge instead of the gate is one of them. We did that in SFO yesterday and London Heathrow today on our layover. I thought the one yesterday was nice, but the one in London was incredible. I neglected to get a picture of it but we’ll be back there at least 2 times on this excursion so I’ll try to remember later.

The jet took off west over the Pacific Ocean a bit and then made a u-turn. Dan got this shot of San Francisco from the plane. I’ve never flown out of SFO before so this was a new view for me. Really breathtaking.

We watched “The Monuments Men” on the plane. It’s the story about a task force of men who went in search of the art work the Nazi’s had stolen during WWII. Not only did it satisfy our continuing fascination with all things related to that war, there was a personal connection to the trip we did last year. We’d been in the churches in Ghent and Bruges that were in the film, and the Michelangelo “Madonna & Child” is still there in Bruges so we had seen that, too. It’s his only work that exists outside of Italy.  I also made some progress on the lengthy Churchill biography I’m reading, preparing me for some things we’ll see in a couple of weeks in London.

We arrived on time in London around 11am Wednesday local time. Dan’s flyer status gives him access to the spa there so we both took showers, then went to the BA lounge for lunch – a full buffet with salad, sandwich and dessert bars. Considering how bad and pricey most airport food is, getting beyond decent food included with your travel is a pretty nice treat.

We had a short flight to Dusseldorf, Germany, then a 45 minute train ride to Cologne. I’m excited to start the trip in Cologne this year. Dan will leave early for work tomorrow and I’ll have the day to myself. It will be nice to be on my own in a city I’m at least a little familiar with. Haven’t decided exactly what I’m going to do yet; the point of tomorrow for me is to be unscheduled and make it up as I go along.

We have an odd affinity for the Cologne train station. We were in it 5 times last year – 3 for travel purposes, once for dessert and coffee, once to buy nail clippers. It’s practically a mall. 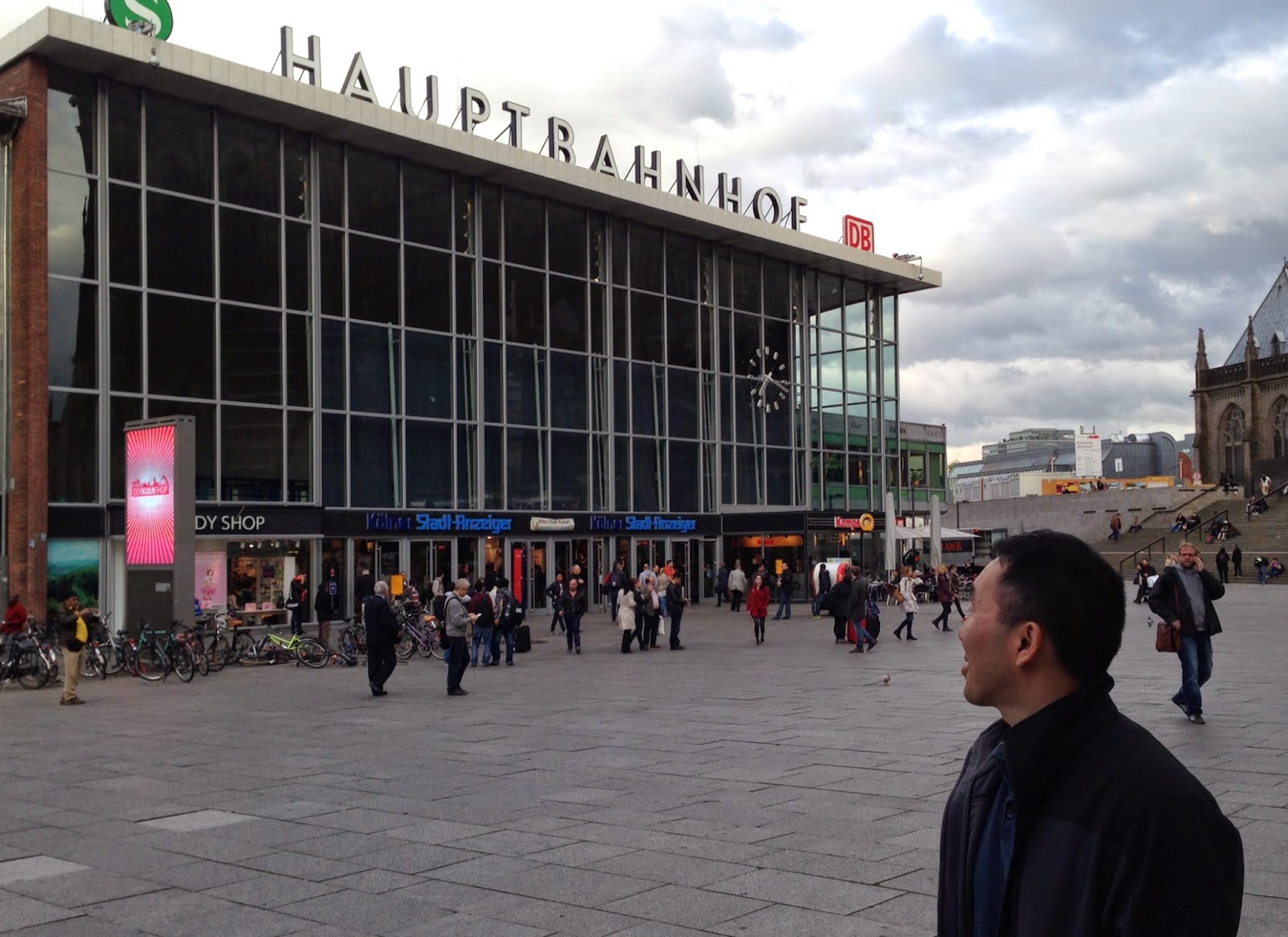 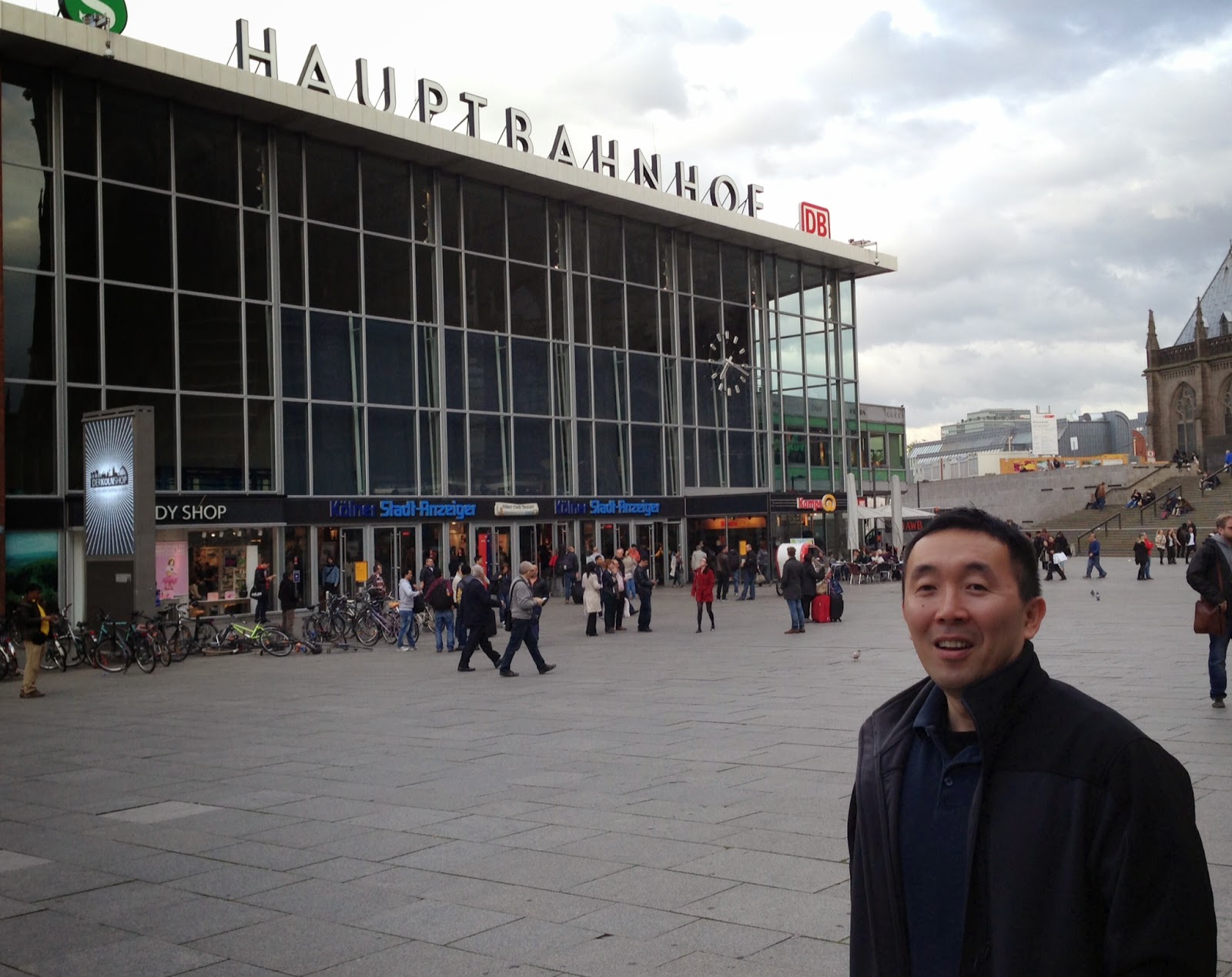 And Dan loves the word “hauptbahnhof” (hopt bon hoff) which means central station. When you walk out of the station, you are struck by the majestic cathedral. You see the end of it on the far right side of the pictures above. Below, you get an idea of how big it is but this picture doesn’t do it justice since we couldn’t get the bell towers in it, which are even higher. See how tiny those people are on those steps leading up to it? I said to Dan as we were walking through the square that I’d forgotten how overwhelming it is. The size is a part of that, it’s hard to describe. Again, see how small those people are? And the fact that it’s 700+ years old. And still a functioning church, which we were reminded of as the bells started tolling. 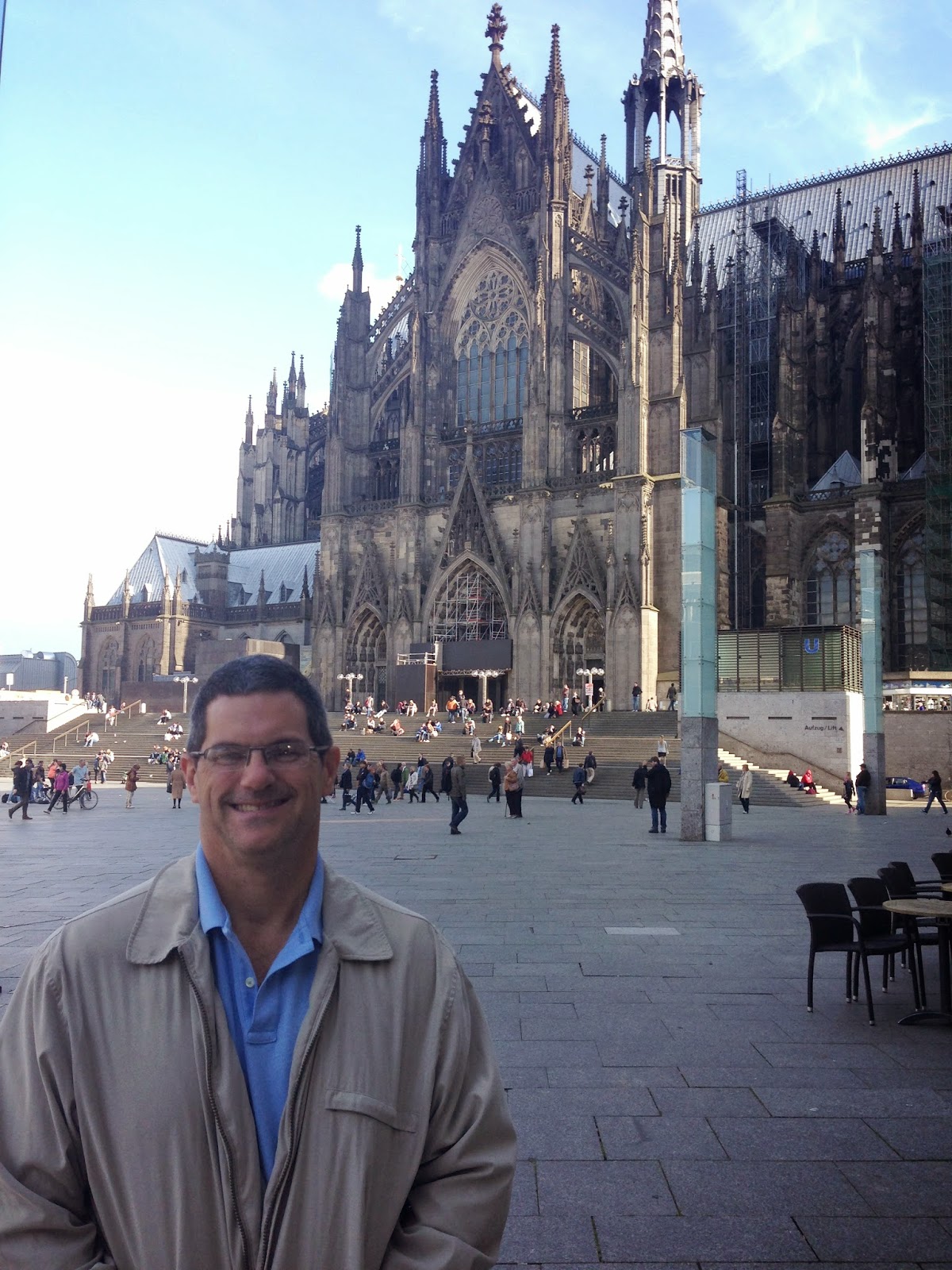 For me, what also contributes to that overwhelming feeling is knowing some of the history. Like a lot of cities in Europe, Cologne suffered great devastation during WWII. To be in the same spots we’ve seen in pictures and contemplate all that was going on during that time puts a lot into perspective. Here are a couple of the images I thought of as I was walking around this neighborhood this evening. 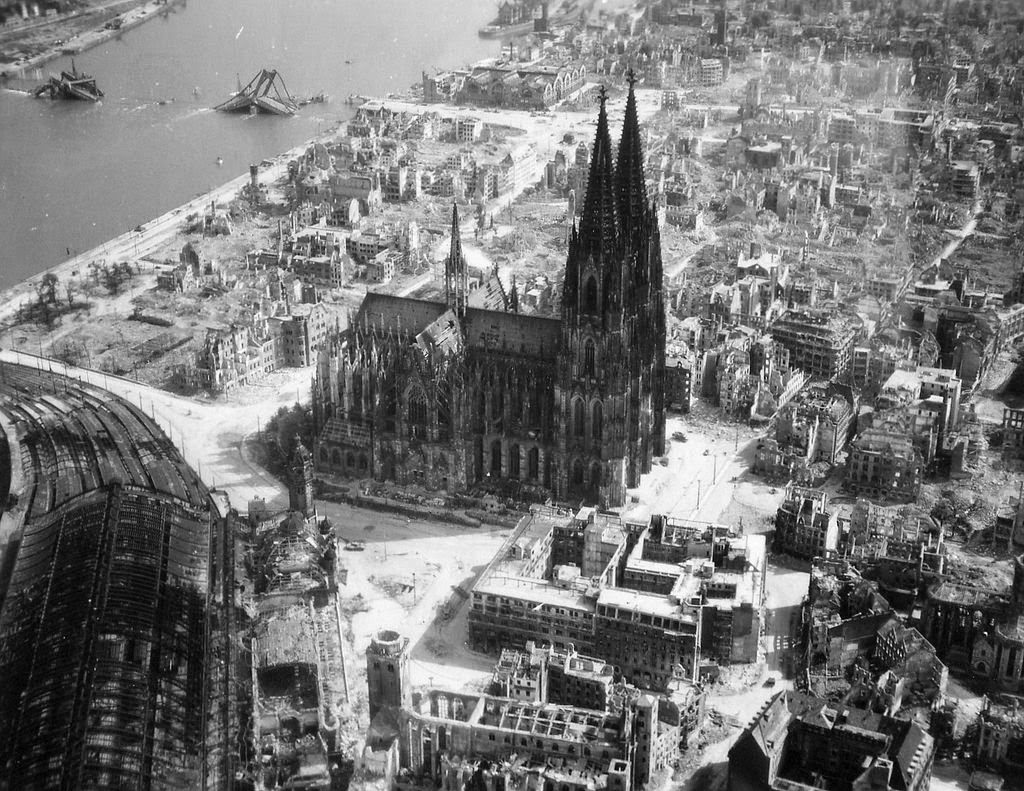 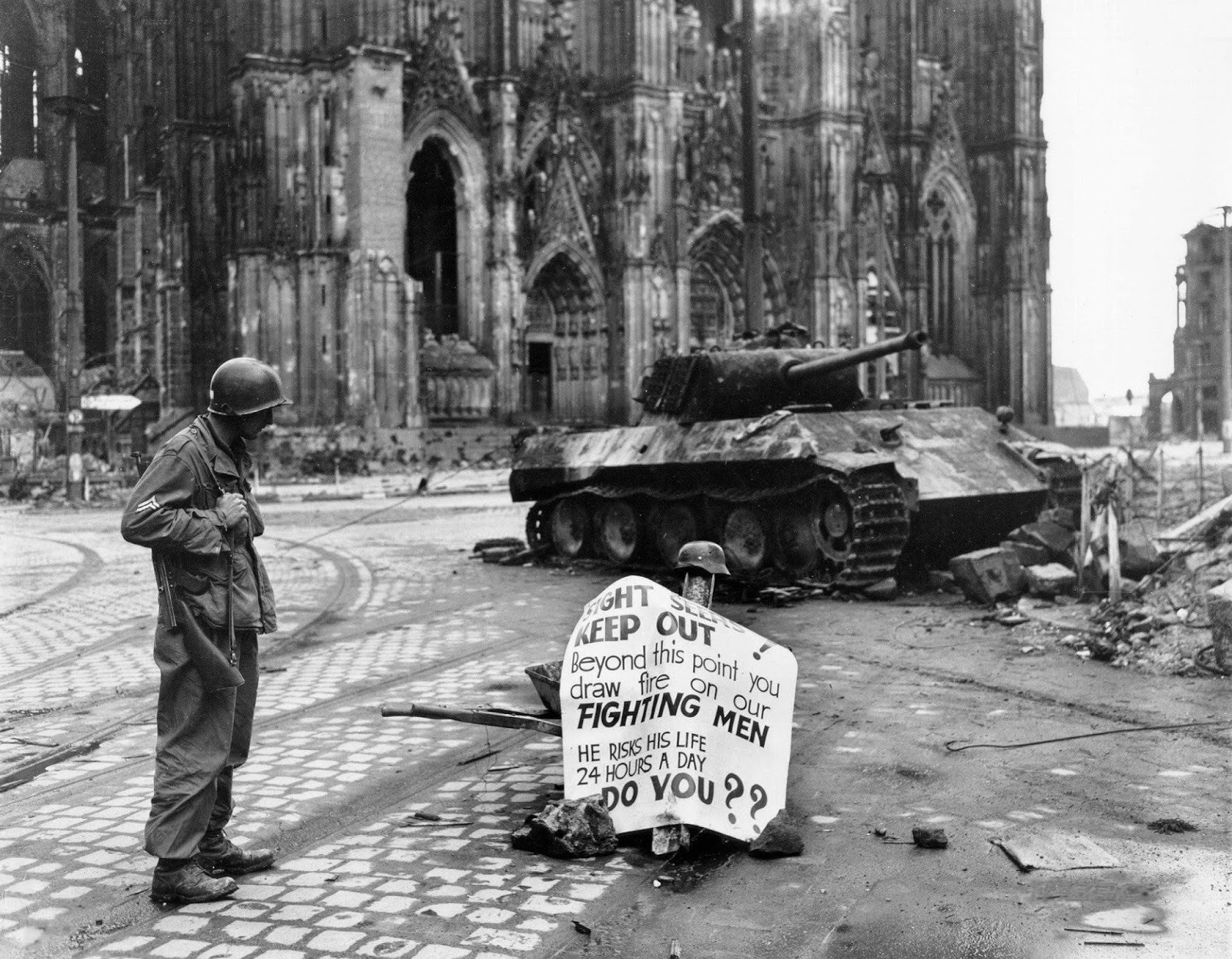 We’re staying at a hotel really close to the cathedral/train station, and found a nice little Italian place for dinner. It’s been a long day. I’m glad to be here.