It’s hard to believe this was our 5th day in Paris. It went by Really Fast. Dan and I were saying earlier that Normandy seems like FOREVER ago. That was just Sunday; this is Thursday; hard to believe!

Same routine this morning with breakfast. Dan’s feeling mostly better, we got a reasonable start out, leaving about 9:30am. We had a pretty loose day planned, there was nothing we “had” to do on any particular schedule. We still had some things we wanted to use the museum pass for. As of yesterday we’d gotten our money’s worth – an even score on entrance fees plus quicker entry where available – so anything today would be gravy. But we didn’t want to overdo it with museums because we still had neighborhoods to check out.

We took the metro over to the Bastille neighborhood, only about a 3 mile trip but farther east than we’d gone before. We wandered around that neighborhood and the one just west of it closer to the center, Le Marais. They were both much more livable than what we’d seen so far; like this is where the “normal” people in Paris lived. We took an early side street and came across a Boulangerie & Patisserie – like we’ve seen on almost every block in any part of Paris so far – but this one was cheaper than any we’d seen. When we’d planned this trip we’d said we were going to eat lunch like a local every day and get something fresh and eat in a park. That hasn’t worked out because we haven’t really eaten lunch – late breakfasts in, early dinners out, and that’s it. Today was the day. We picked up some pasta salad, couscous salad, a fruit flan and apple tart. The lady threw in some bread unrequested! It was less than 9 Euros. (say $12)

A block or two away we came across another open market. Few things more dangerous than Dan in an open market. He wants to get everything! He got 4 nectarines for 1 Euro; the guy threw in 2 more peaches. Then 2 .5 liters of fresh squeezed juice. He got a Nutella crepe with coconut. Street vendor crepes are everywhere, it is fascinating to watch them make. Apparently the French love Nutella because that seems to be what all the street vendors use as the base on their crepes. Hazelnut is not really my thing so I just had a bite or two and he had the rest. Seems like we bought something else but mostly I just remember saying “no”! We were already going to have trouble finishing everything before we leave tomorrow.

Shortly after this we took another random side street that looked cute and came across – surprise! – another bakery. This one had palmiers in the window, and I had just said to Dan earlier in the morning that I wanted to have one before we leave. So I did while I was thinking about it. He took a bite first and said “all I taste is butter” to which I replied: “Exactly.”

Our destination was Notre Dame. We’d walked by it on Saturday but didn’t have the museum pass yet so didn’t stop for the tour. Well, today, there were no tours because of a strike. This didn’t really surprise us; the Versailles website had indicated it might be closed today because of a strike, which was why we went yesterday once we started re-arranging things. Oh well. You could still get in and walk around for free; there was quite a line but it was moving fast. This is the #1 tourist attraction in the #1 tourist destination on the planet, and it was free, so might as well.

It was about 11am at this point; there was a mass going on. It was so interesting watching the small number of parishioners attending mass up front, the priest was giving the sermon at the time we walked in, with literally Hundreds of tourists wandering all around outside the ropes. I guess if this is your parish you’re just used to it. 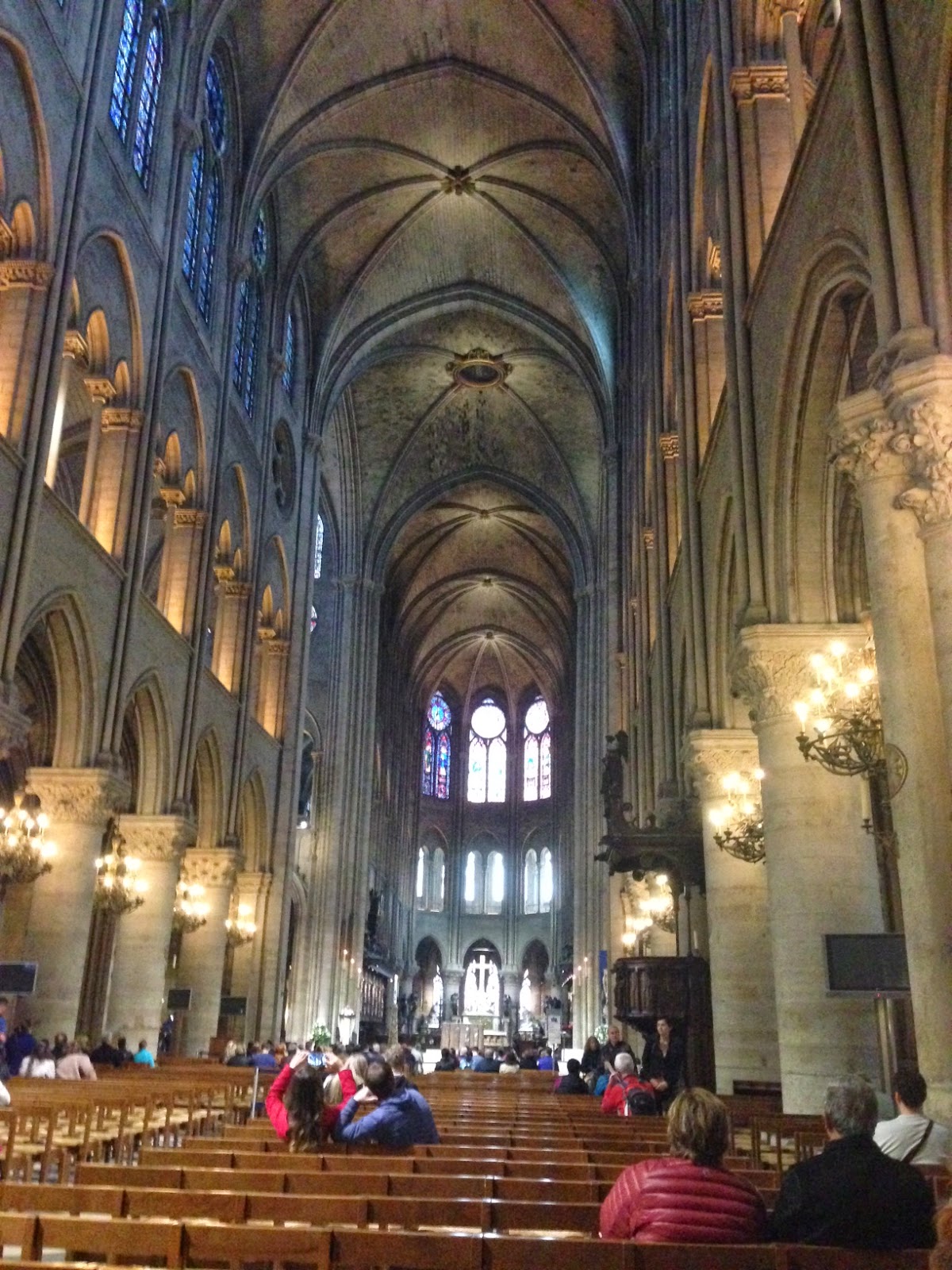 For what it’s worth – we think the cathedral in Cologne is much grander, in size and complexity, both both architecturally and artistically. For that matter, so is St. Bavo’s in Ghent. Dan has been to one in Strasbourg that he says matches or surpasses Cologne. But if this is the only cathedral from the Middle Ages you’ll ever see, it ain’t half bad.  That said, it is the oldest – dates back to 1160 – so perhaps the others learned from it. 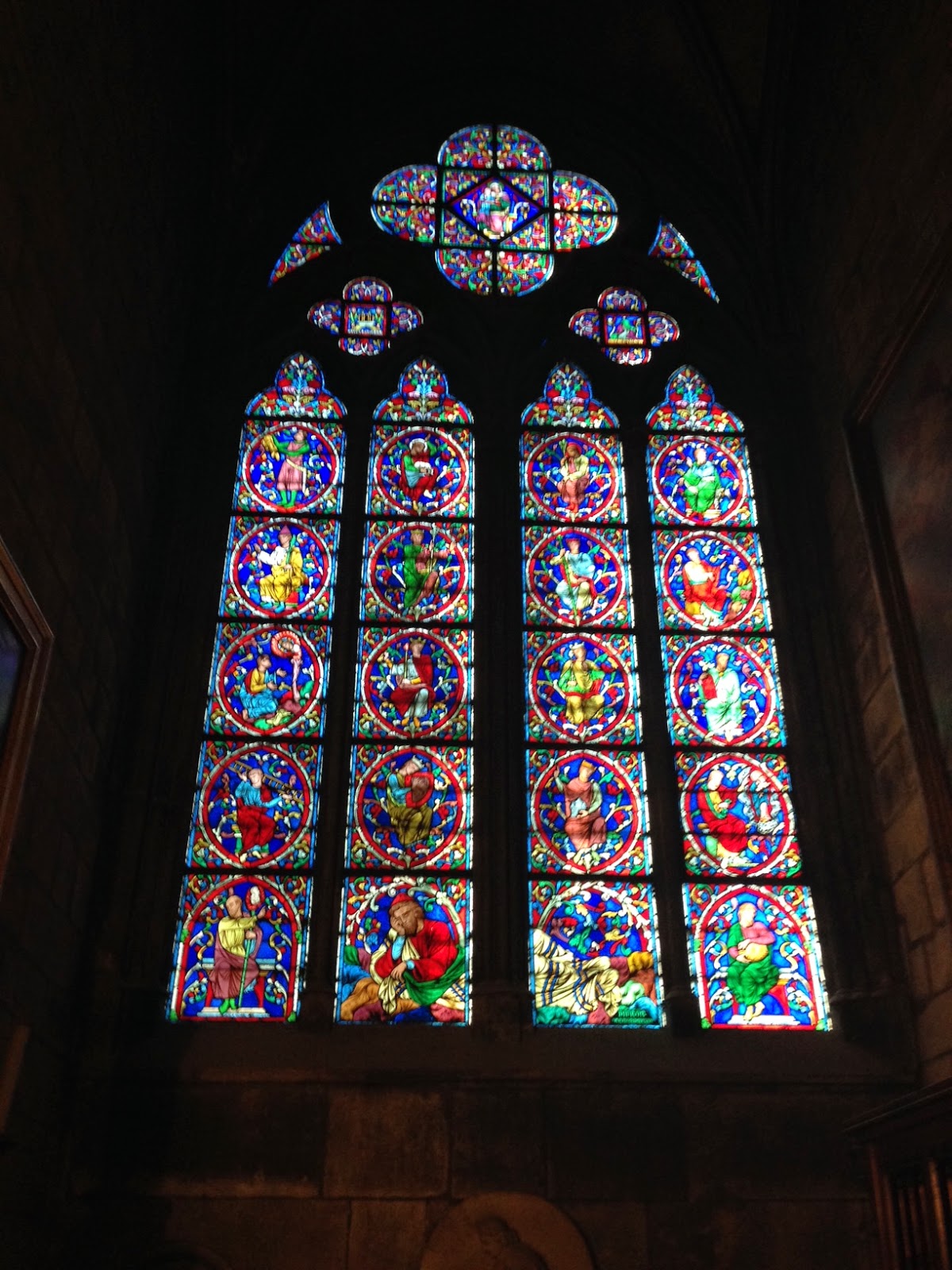 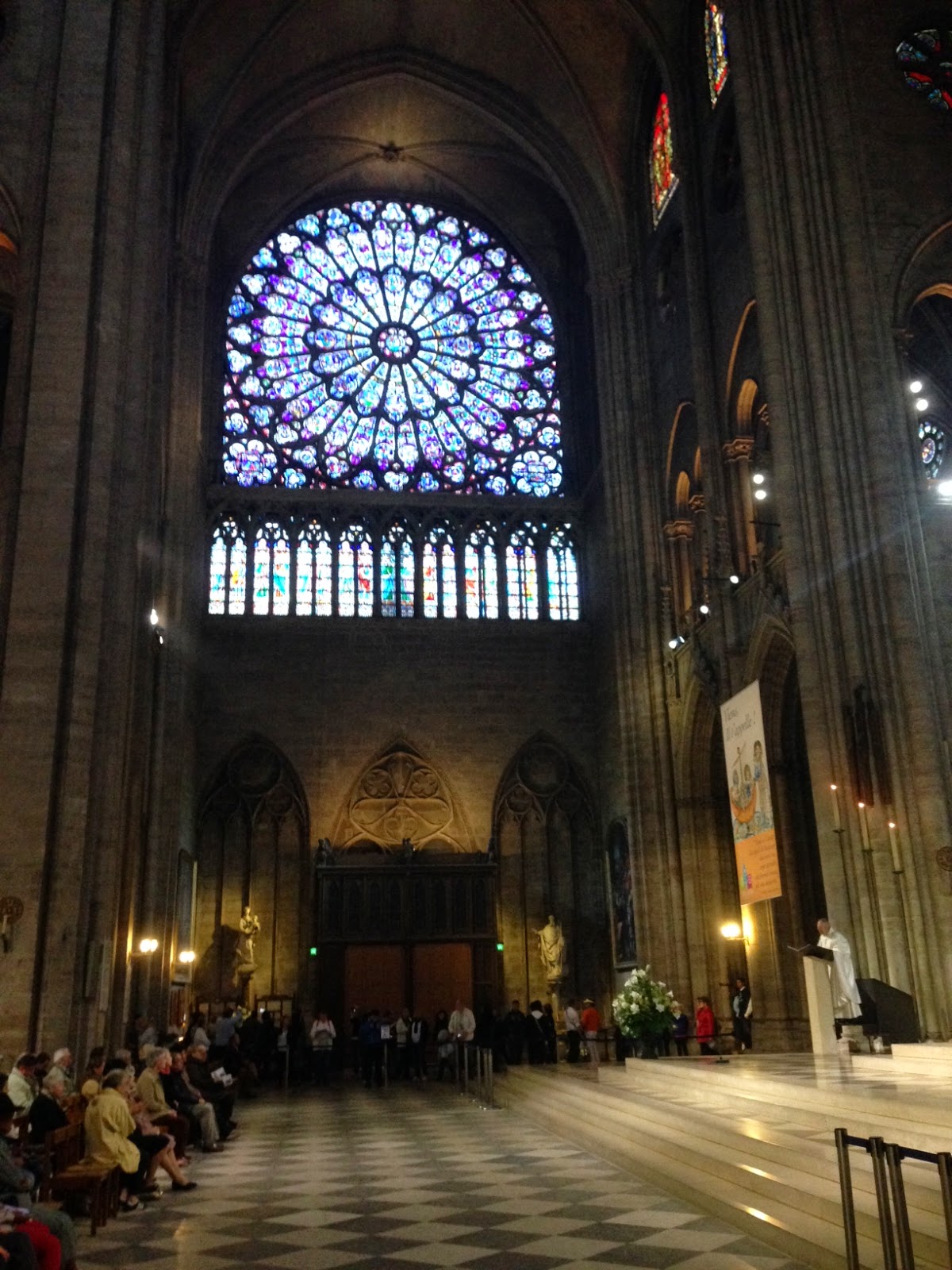 We had planned to eat our picnic lunch in Luxembourg Gardens in the Latin Quarter, but it was too early for that. Now what? Google to the rescue – we found a museum on the pass that was open and happened to be on the way. Musee Cluny focused on art from the middles ages, most of it religious. 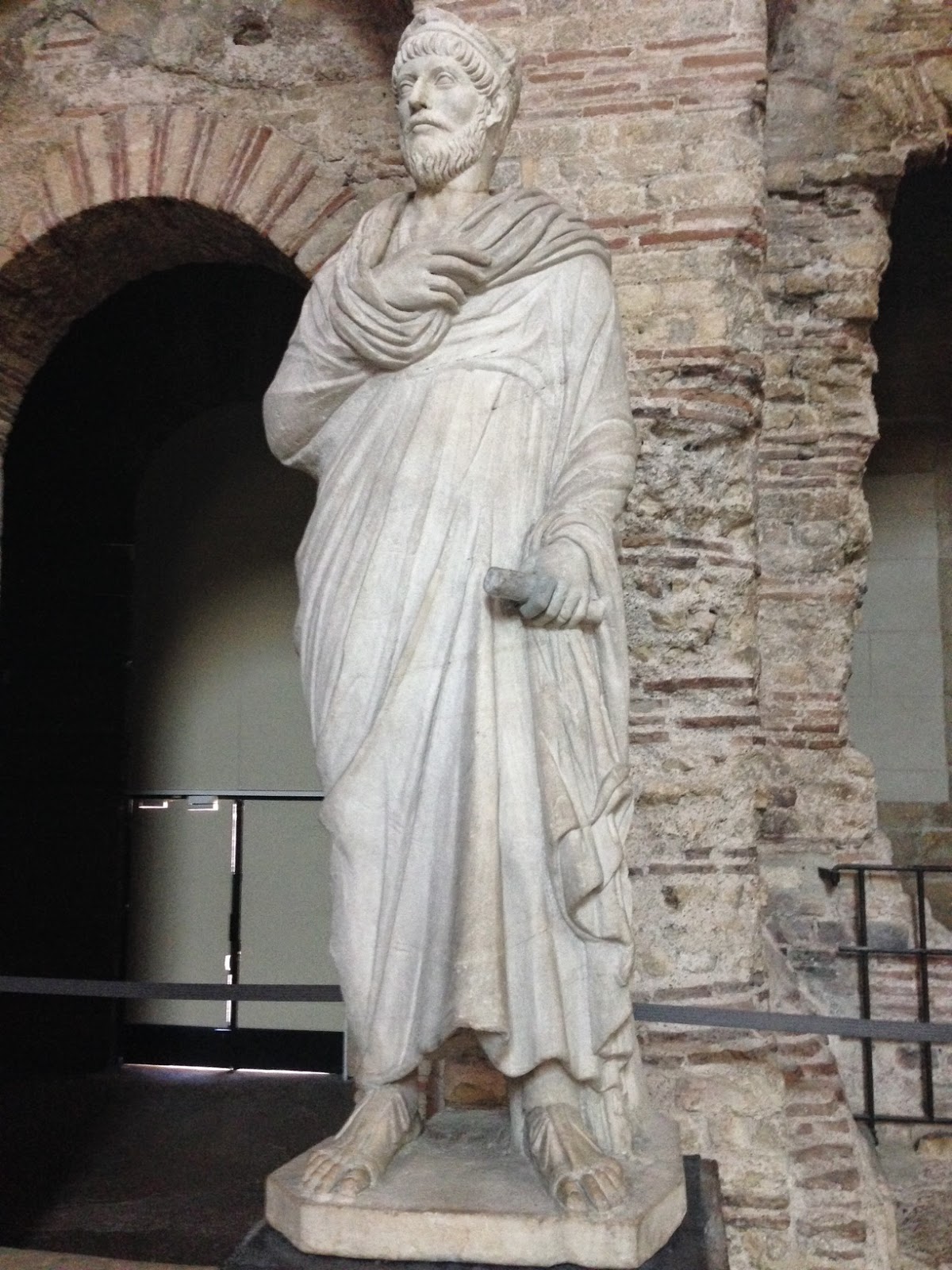 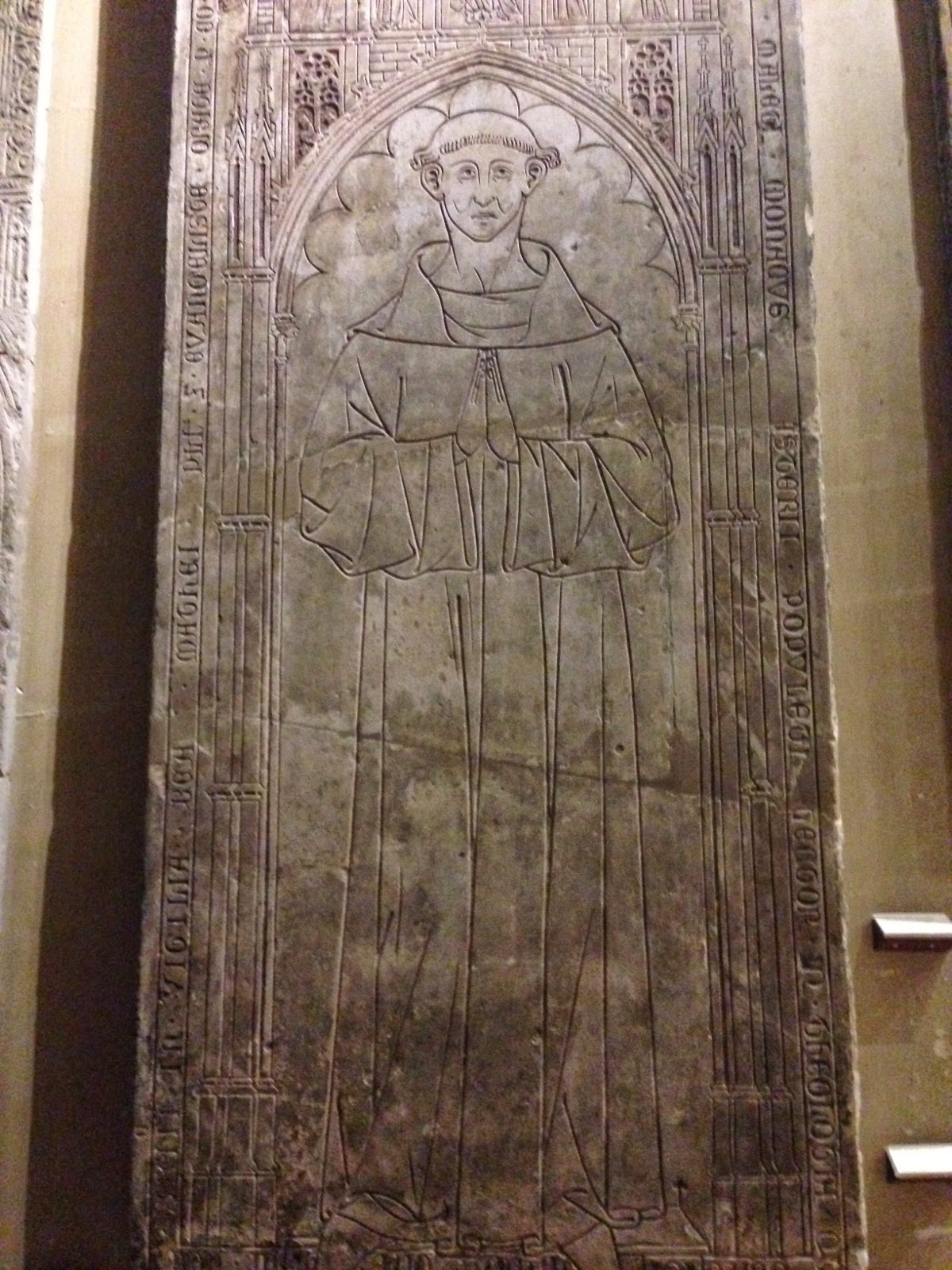 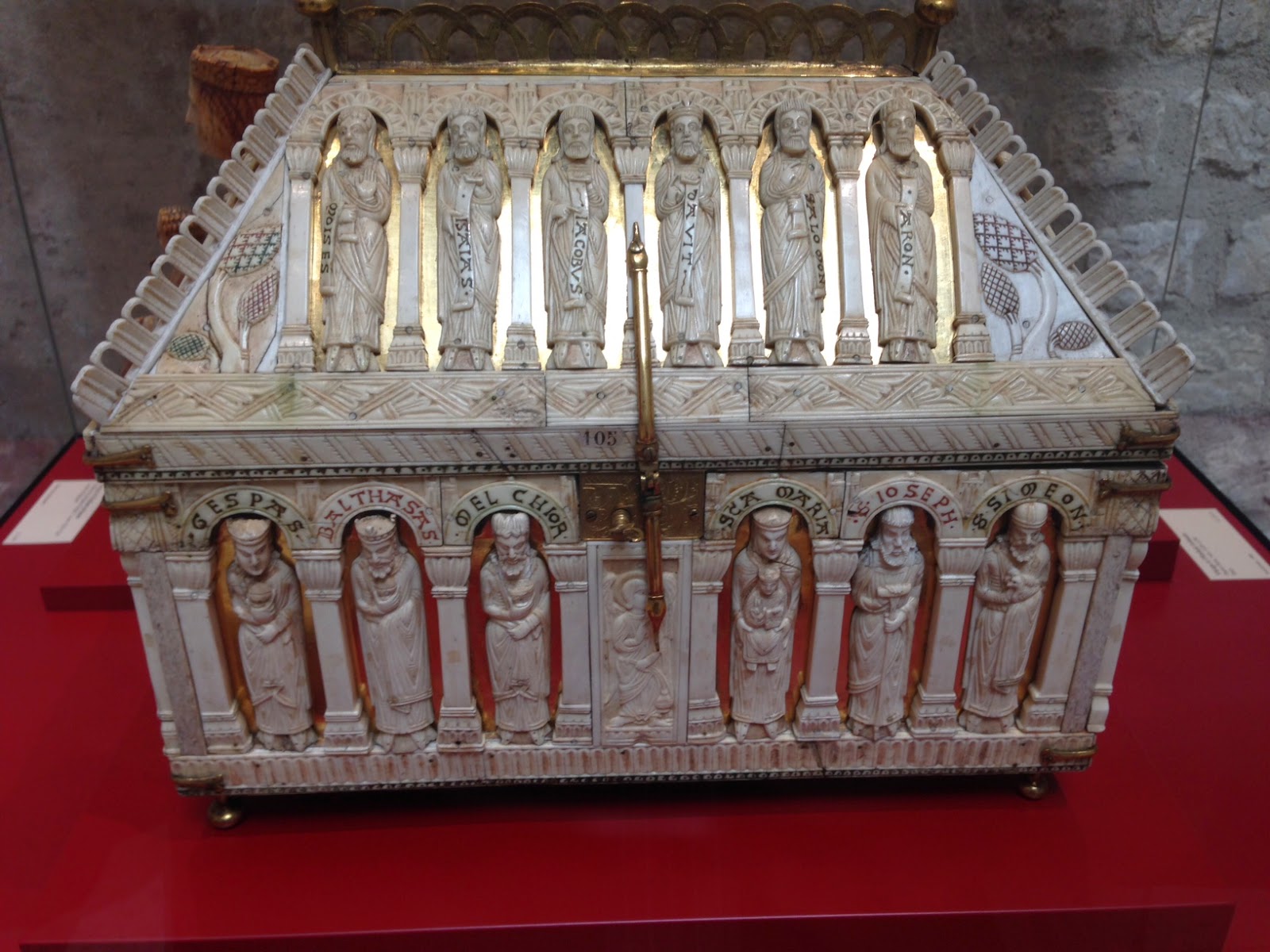 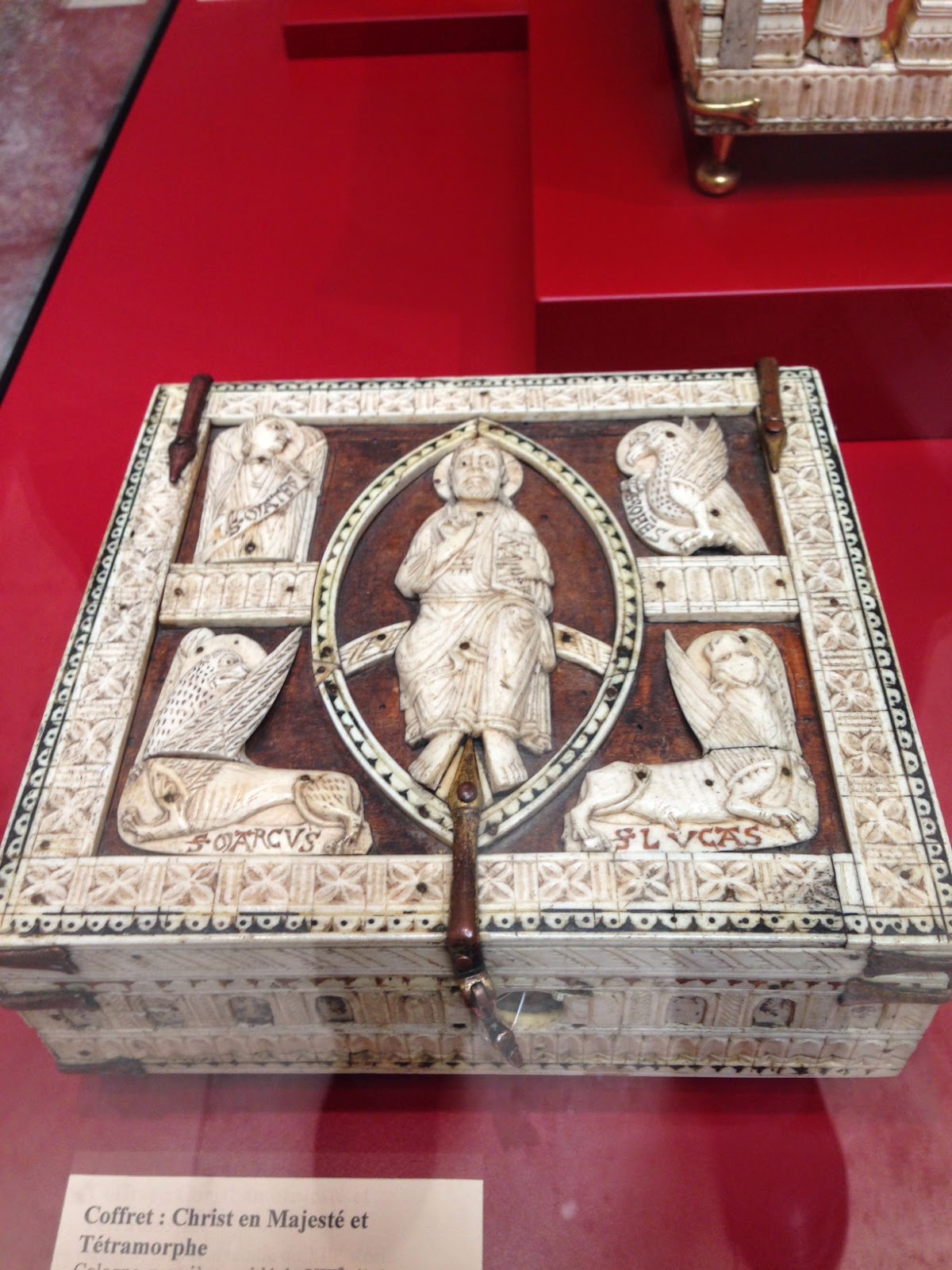 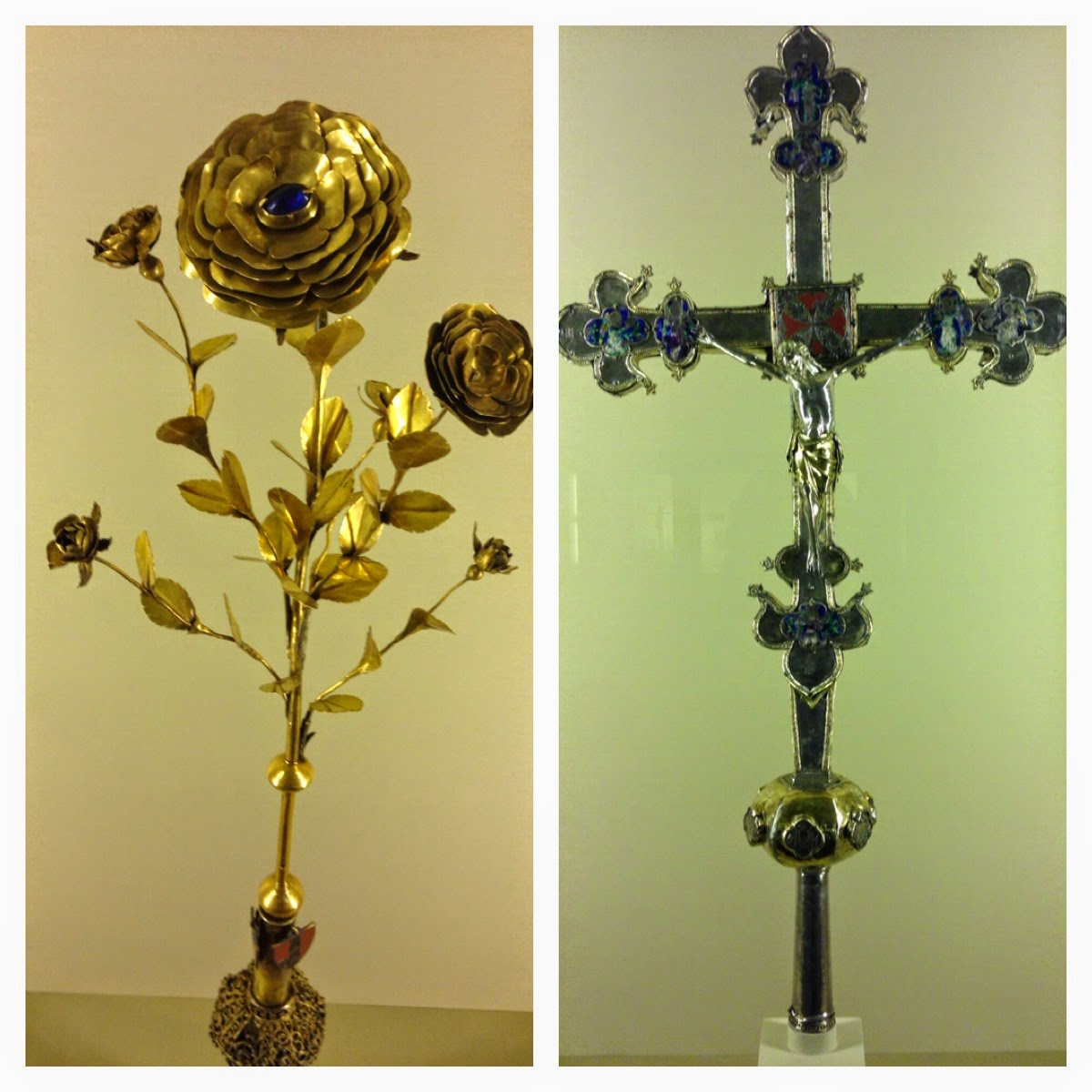 We were there over an hour. We made it over to Luxembourg park by about 2pm. It was beautiful. We’d tried to come on Saturday but the entries were blocked off by police, we never did figure out what was going on; it was Armistice Day here that day (WWII over in Europe) and there were all kinds of activities here and there. But today it was open and lovely. We unpacked our lunch from the backpack and ate under a shady lane. It was actually very cool in the shade. After we ate, we walked through the park some and discovered how big it was. 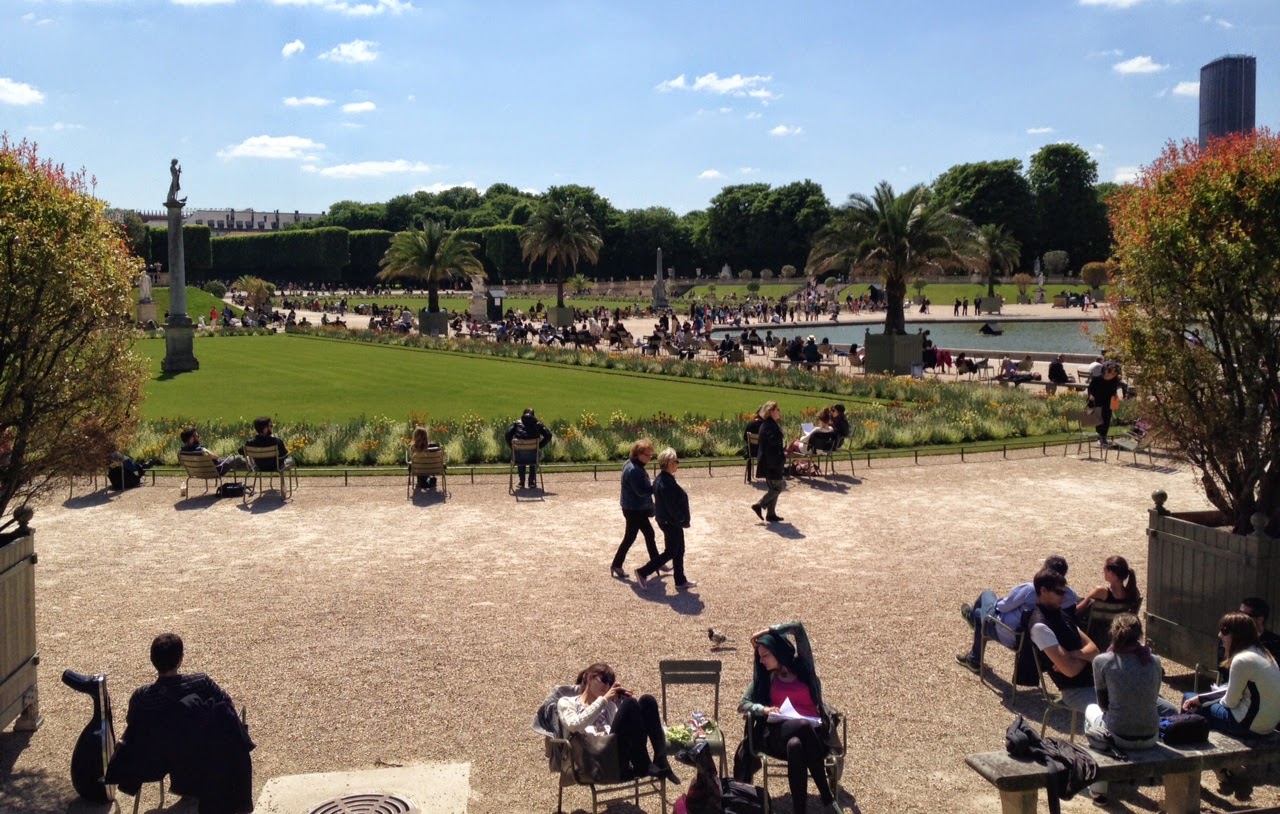 We found two empty chairs in the sun and sat for a bit and warmed up while people watching. 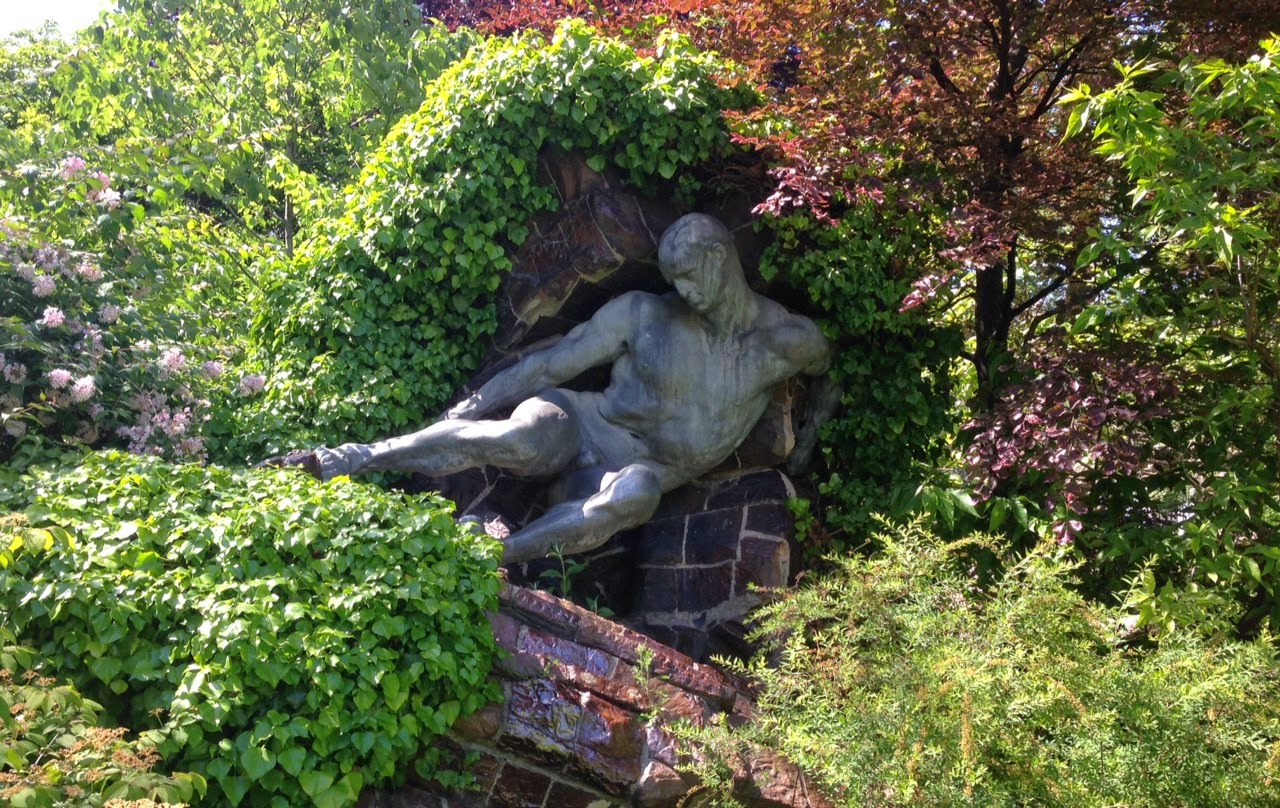 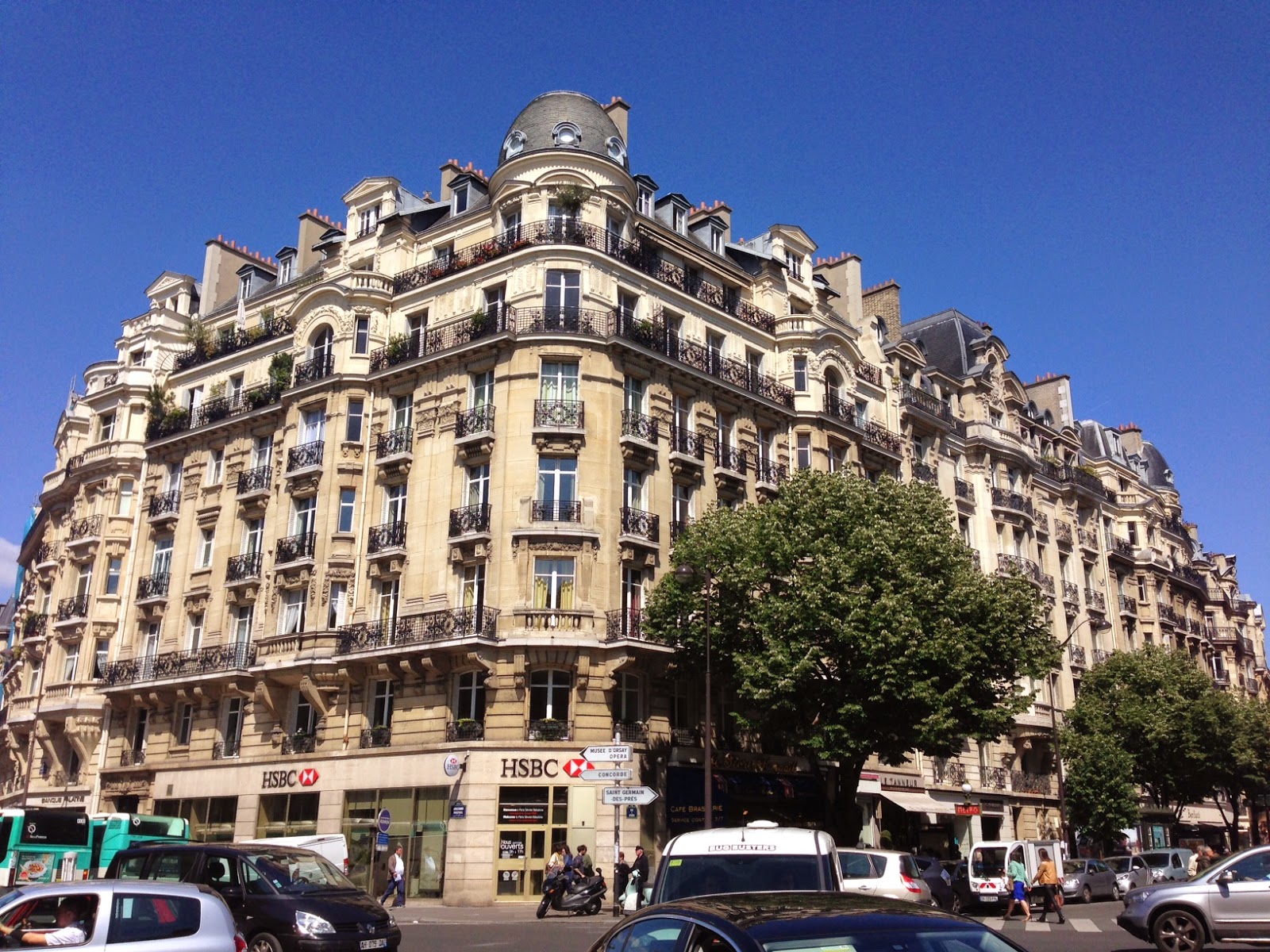 Next stop was Musee Rodin. About the time we got to this major intersection, we noticed the traffic getting worse and worse, louder and louder, lots of horns blaring. Just a few blocks before this we passed a long line of what we would call SWAT vehicles, full of Paris police looking like they were resting, waiting, eating lunch or something. Dan took this picture because he really liked the building!, but you can sort of see the traffic at the bottom.

The traffic got worse and louder along Rue Babylone as we headed to Boulevard Invalides. A few blocks away I was like “oh, it’s a parade”. Scratch that. Strike March! 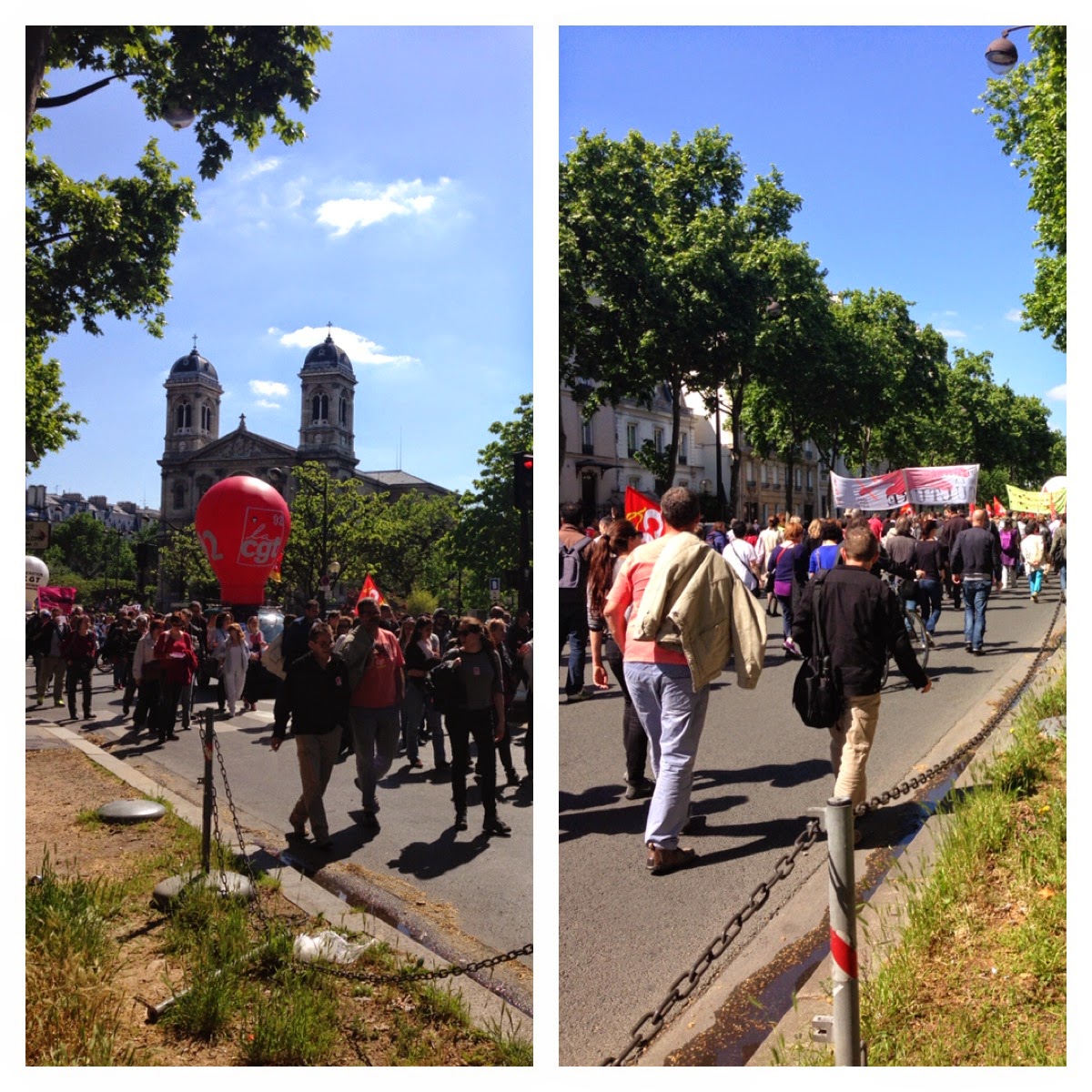 There were a lot of people, they didn’t all seem to be workers marching. Seems like everyone joins in. When we got to the street that had the entrance to the Rodin, we were stopped by a wall a police. We said we just wanted to get into the museum. They said you can’t go through, it’s closed anyway. We knew it wasn’t because we’d already seen people in the gardens. (Funny – a guy at Notre Dame said there was no tour because it was a French Holiday; we’d already seen the signs posted on the gate that it was closed due to a strike. Maybe in France they’re one and the same?!)

So we walked around a very large block to finally get to the museum entrance – open – not 30 feet behind the wall of police who wouldn’t let us through. 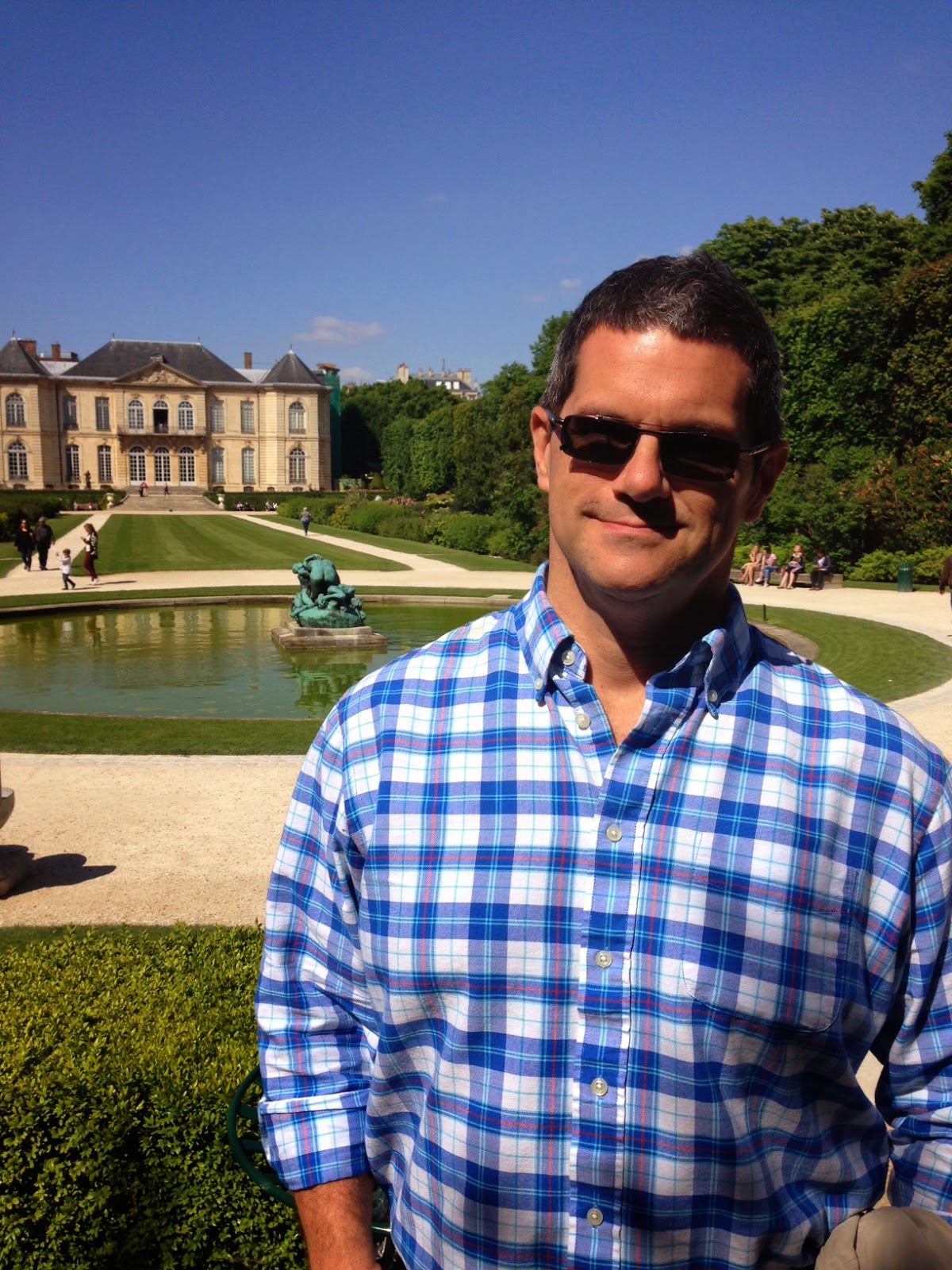 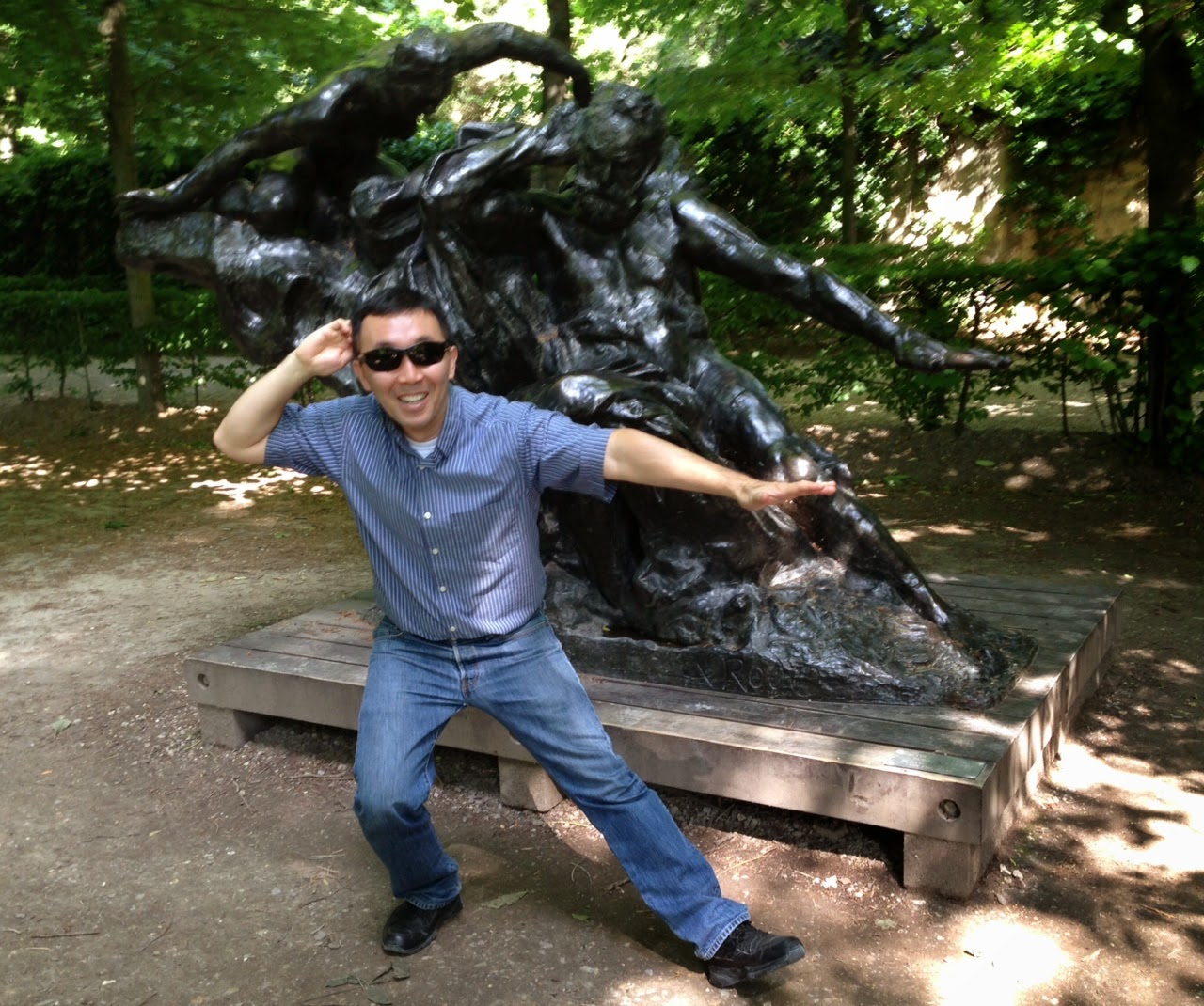 We left the museum – this time through the wall of police – and the marchers were still going. They were headed to the park area in front of Invalides – the Military Museum where we were on Monday. It was an all out party – lots of music, people dancing, all kinds of street vendors selling food. Maybe a strike IS a French holiday. 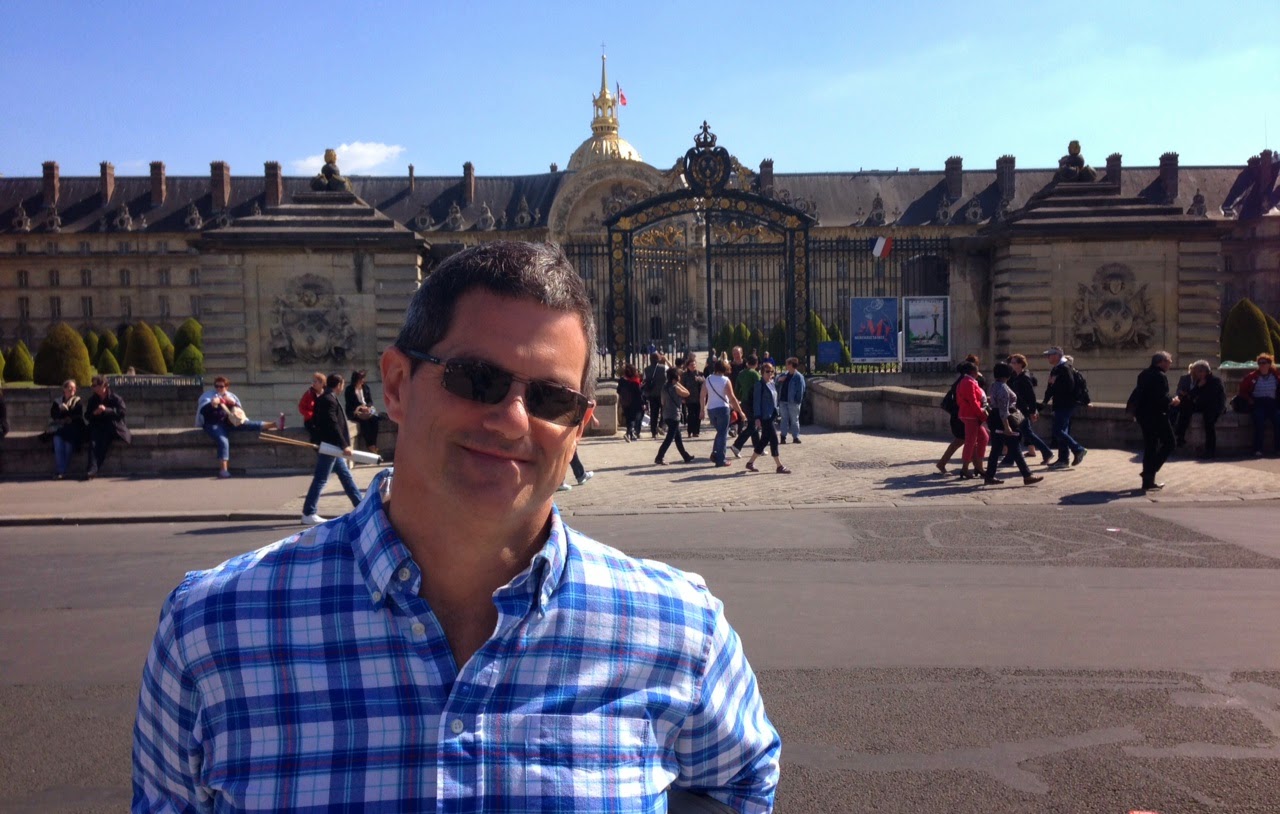 We got back to the room about 5:15, theoretically to rest before going out again. Dan was on a work call from 6-7pm. We went back out one more time for our last museum in Paris, one just a few blocks away from the flat that focused on architectural design, from the middle ages to the present. 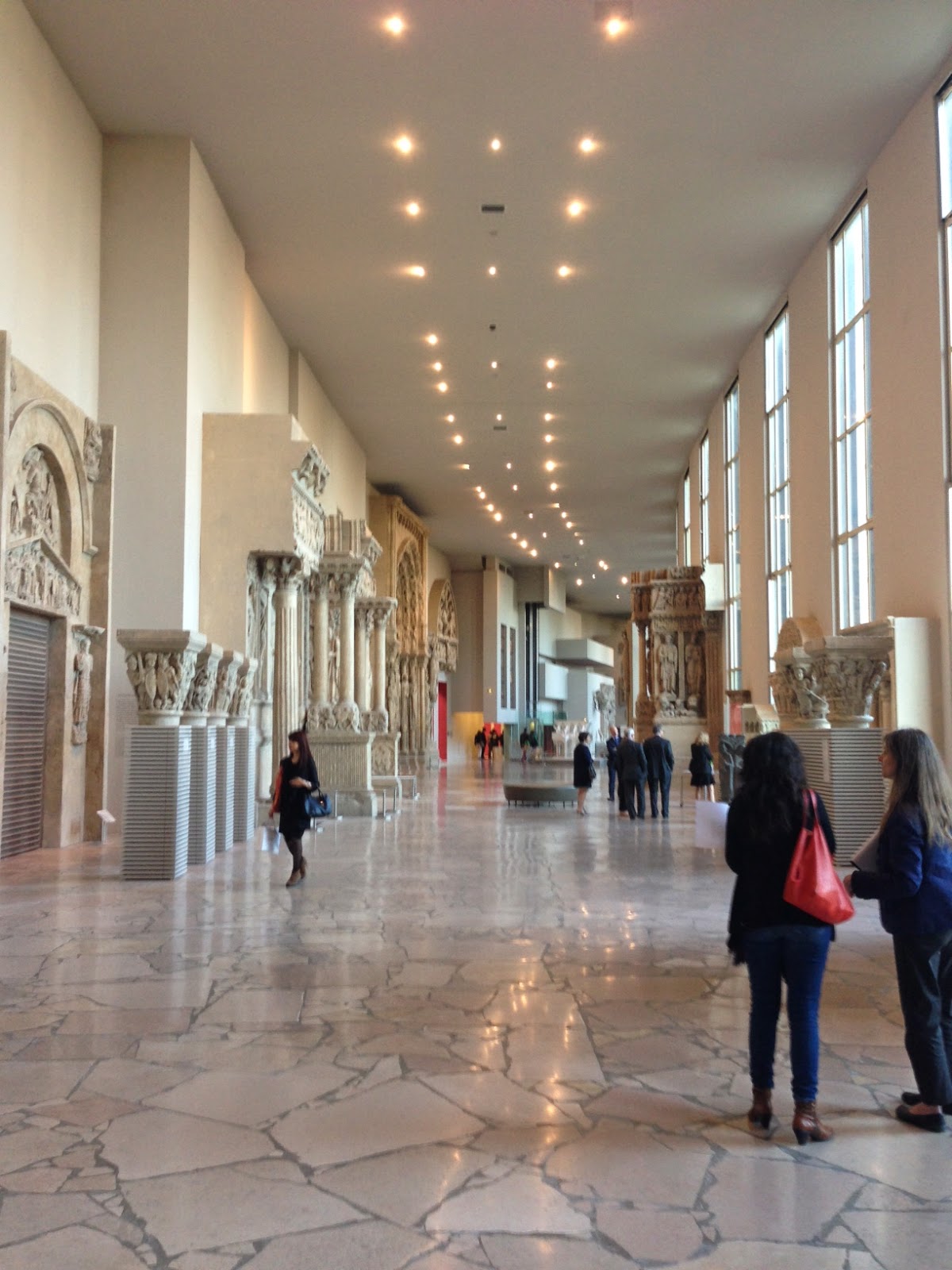 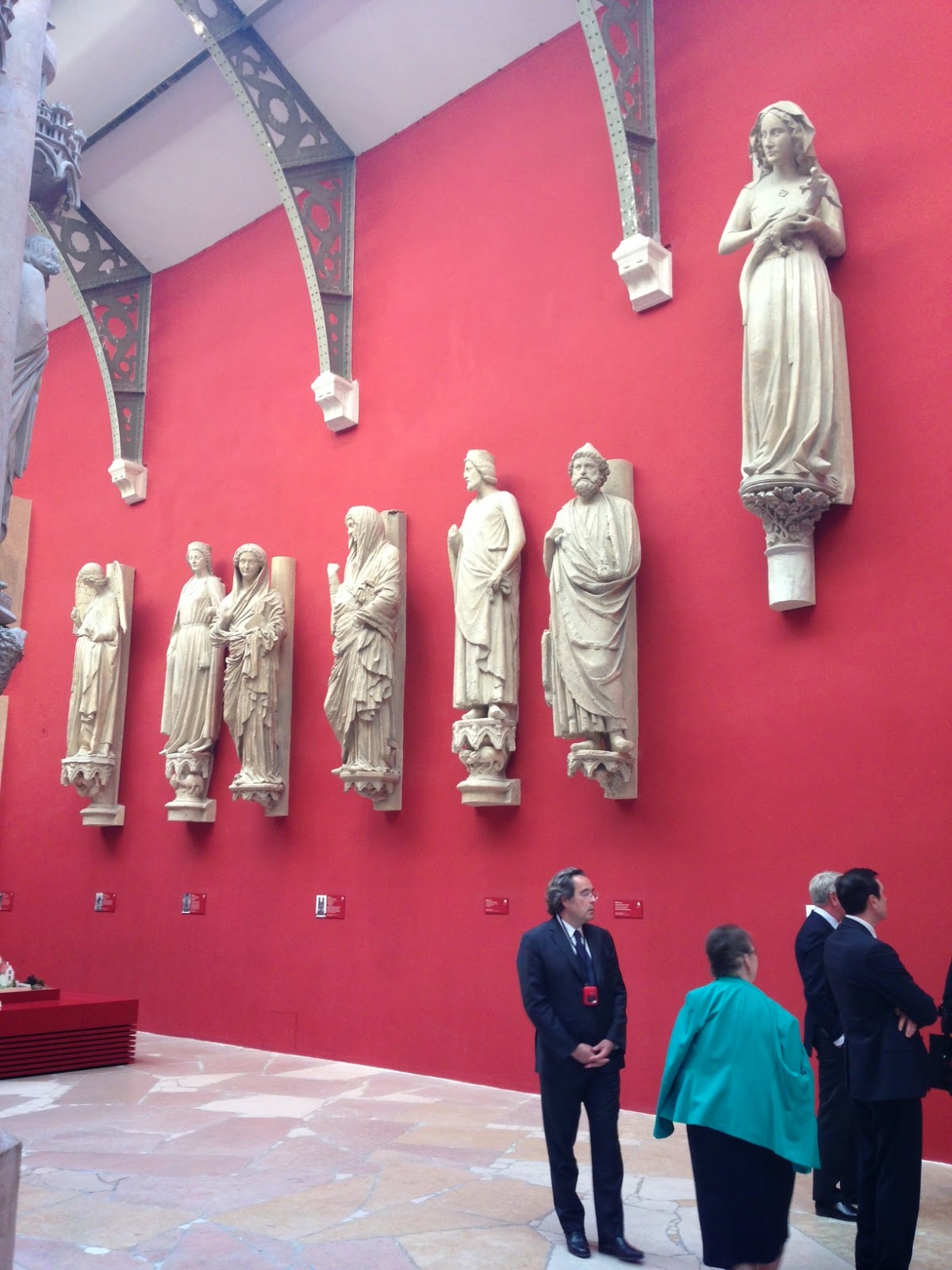 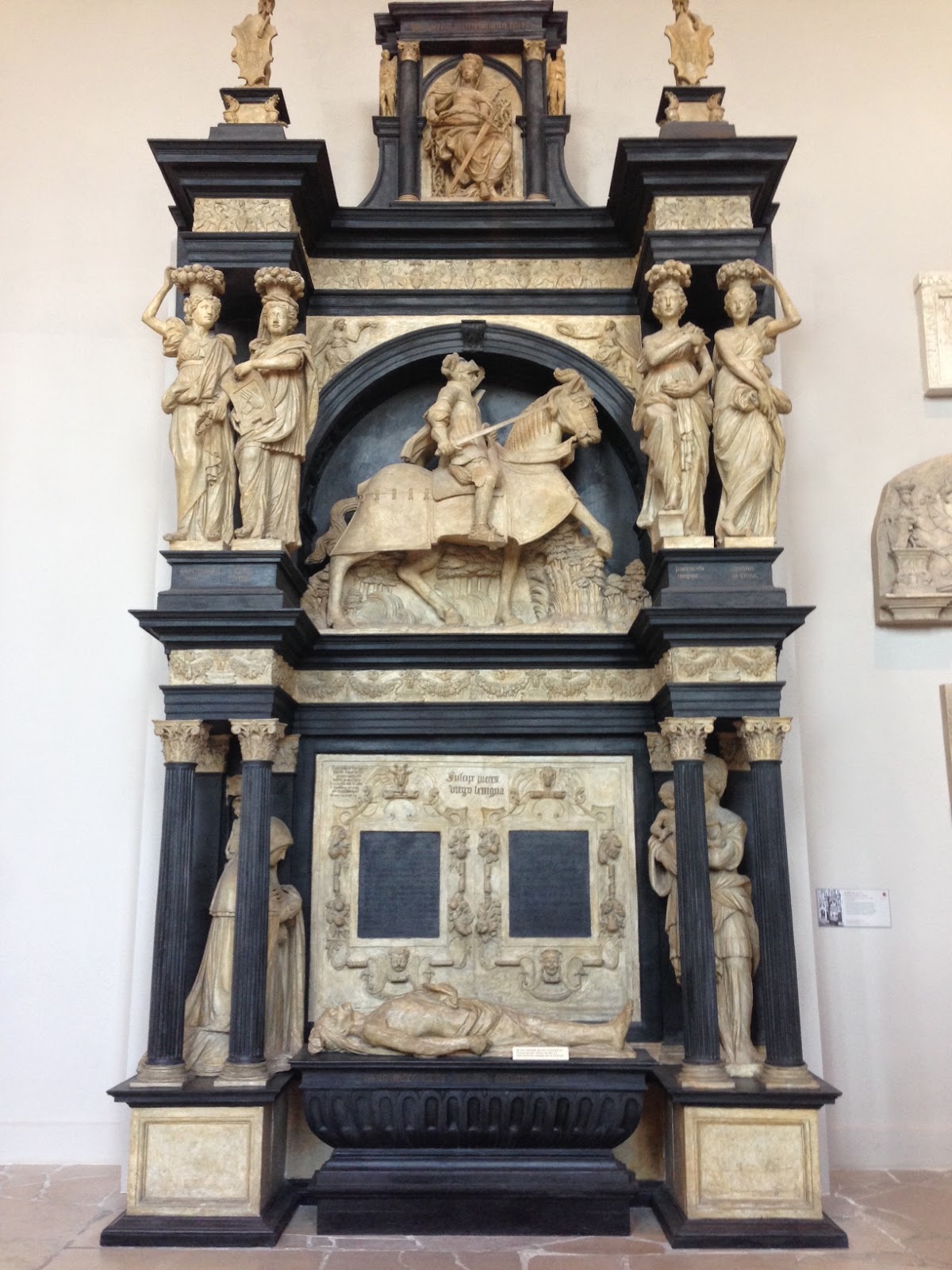 And that’s a wrap for Paris. Tomorrow we leave for Edinburgh, Scotland.