I slept a good 7 hours, got up at 8am. I piddled on the internet over coffee and juice for an hour; Dan was still asleep so I went downstairs to a cafe down the street for some bread. When I got back to the flat, I discovered I had somehow locked myself out even though I had the key! I didn’t want to wake Dan because I knew he really needed the rest so I went back downstairs and just started roaming the neighborhood a bit, breaking off chunks of bread to eat as I walked because by this point I was hungry.

I went down a couple of blocks and turned left into a plaza and ran into this. 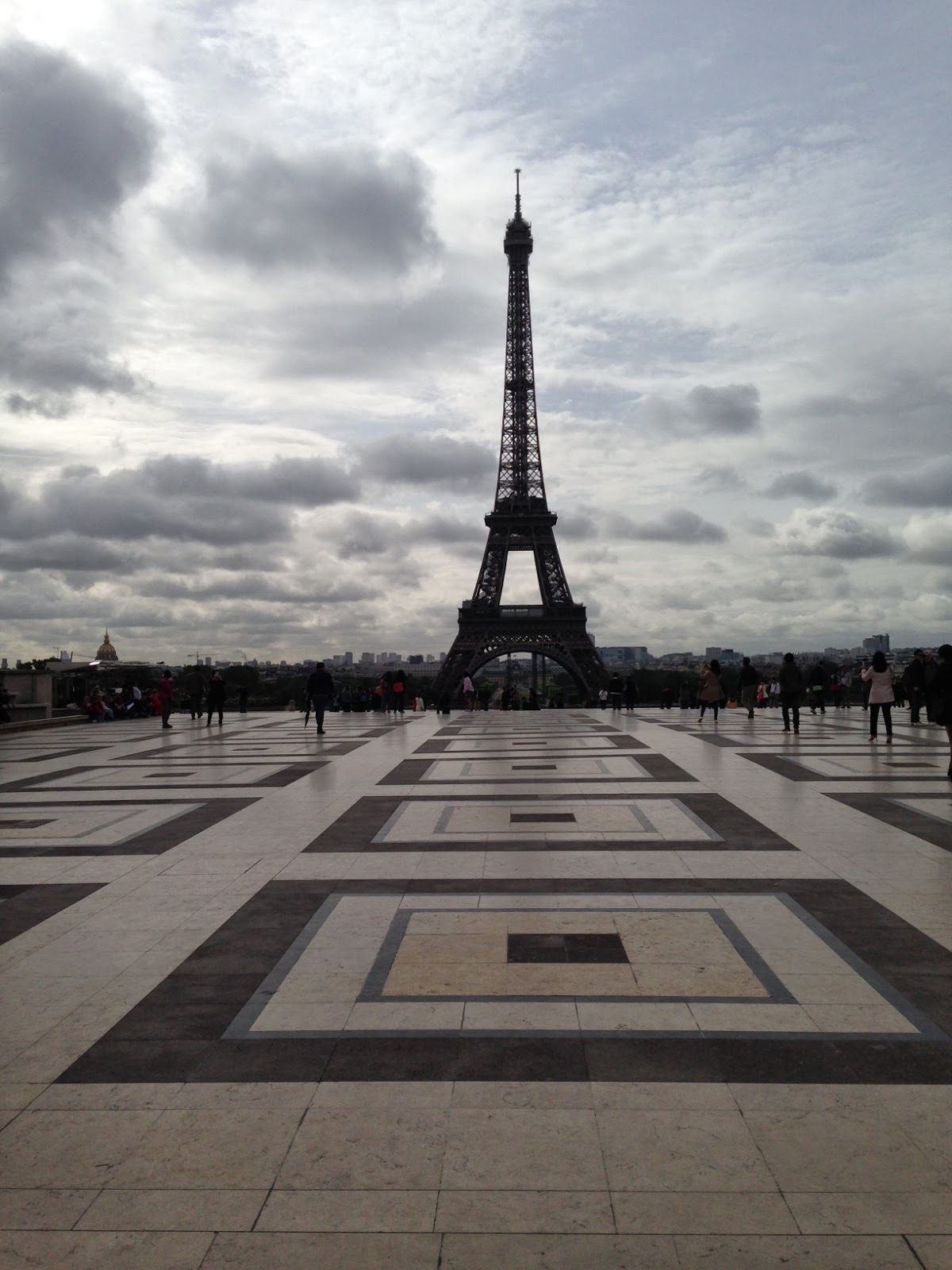 I knew we were close – you can see the top 1/3 of it from one of the windows in the flat – but didn’t realize how close we were until that moment. When I walked to the end of the plaza, there was a pretty pool in front of it. 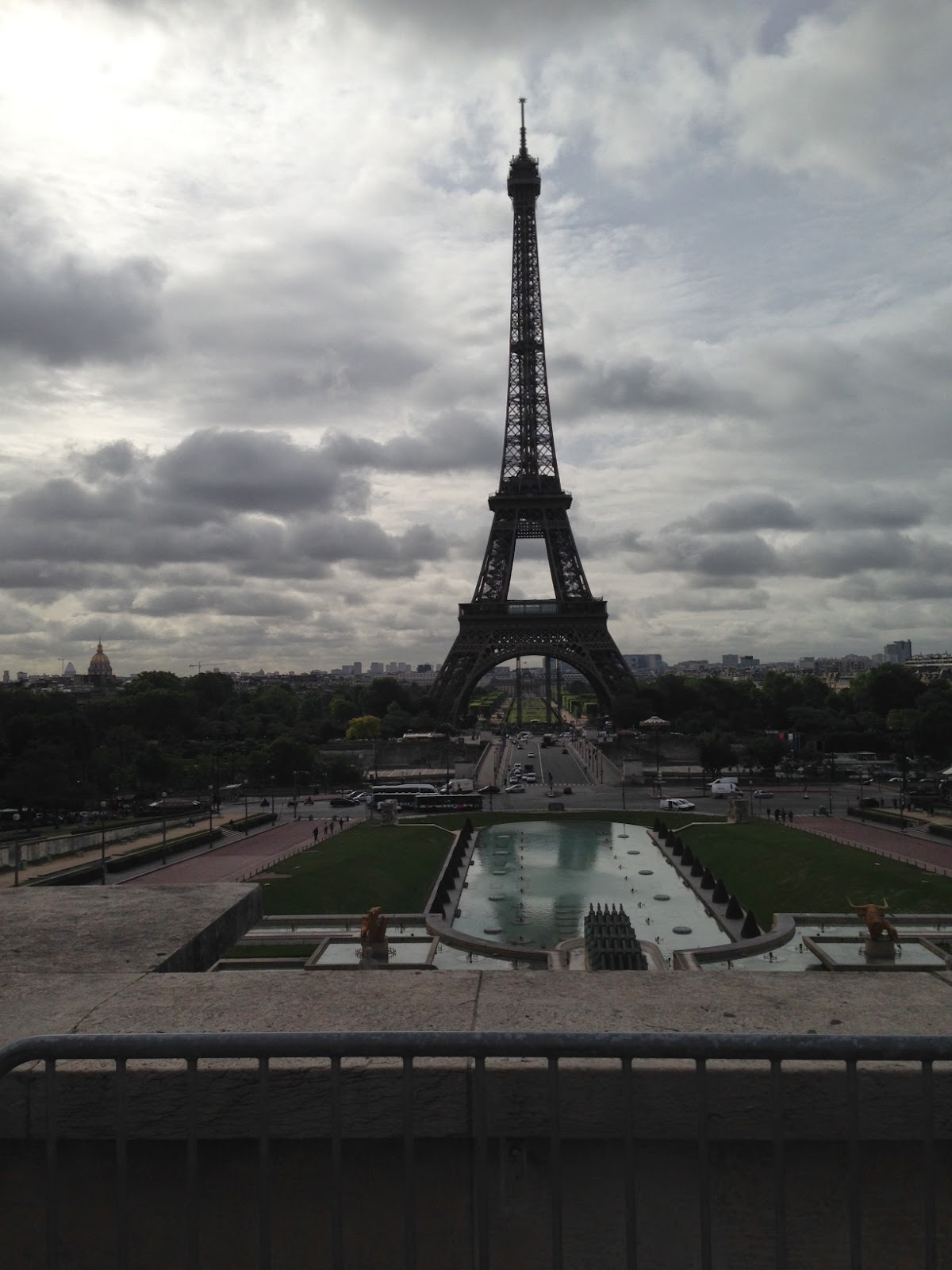 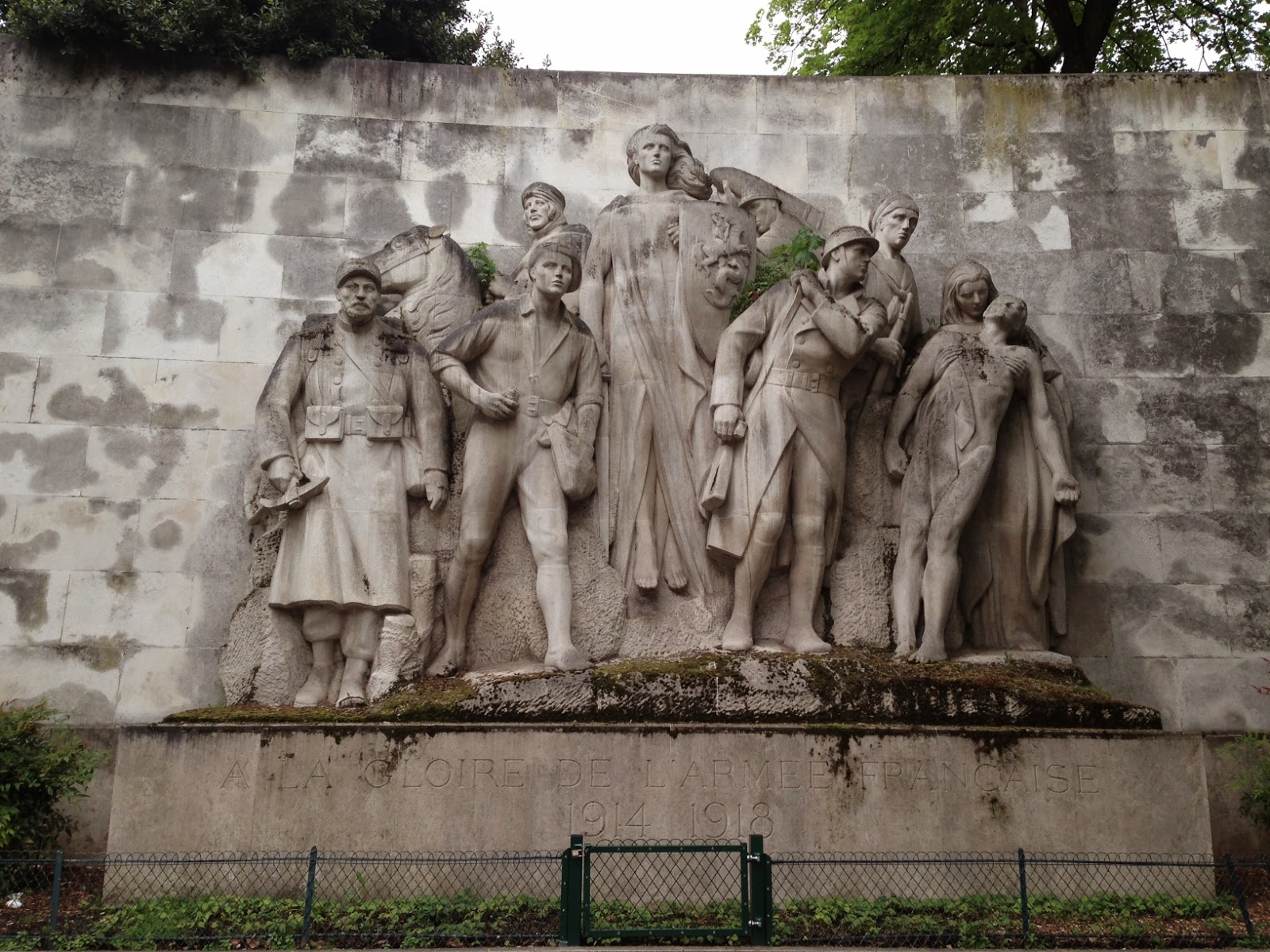 I went back across the plaza and took the long way back to the flat. Came across this WWI memorial. The thing we noticed right away about Paris is this stuff is everywhere. You can’t walk 500 feet it seems without a sculpture, park, something pretty or interesting to look at. By the time I got back up to the flat (do you remember that we’re on the 6th floor? that was 2nd time in an hour…) it was 10am. I knocked but nothing. So I stood outside, still holding the baguette, now 1/3 eaten!, doing emails, etc., on my phone. BTW, this year I signed up for the extra service with Verizon to have access to my phone while I’m here. As long as I manage my time well, it’s not horribly expensive, and it’s well worth it. Especially the 2 days I was alone; I’ve gotten very used to having maps, etc., right there when I travel and, as I discovered last year, it’s a drag going back to paper!

By 10:30am I decided it was time for Dan to get up no matter what – that would be at least 9.5 hours for him – so knocked pretty loud and that did the trick. Apparently the door self-locks when you close it and locking it again with the key is overkill; somehow you lock yourself out. Dan has always kept the key so I wasn’t paying attention as we exited the flat. Lesson learned.

He was feeling better – or at least not worse – but we decided to re-arrange our day to stay close to the flat. Hence the sub-title of the post. The thing to know about the rest of our day is we were never farther than 1.5 miles away from our flat.

We had a decent brunch in and left around 12:30pm. We had decided early on that we wanted to see the Eiffel Tower, but didn’t really have any desire to go up in it. The value just wasn’t there for us, especially when you factor in the time waiting in line. But we did walk under it! The pictures we took at this time didn’t come out because it was so cloudy everything was really dark.

This picture is the same pool as the one above, just from the opposite end of it, and the fountains are now on. So where you see those tiny people standing is where I was standing in the shot above. 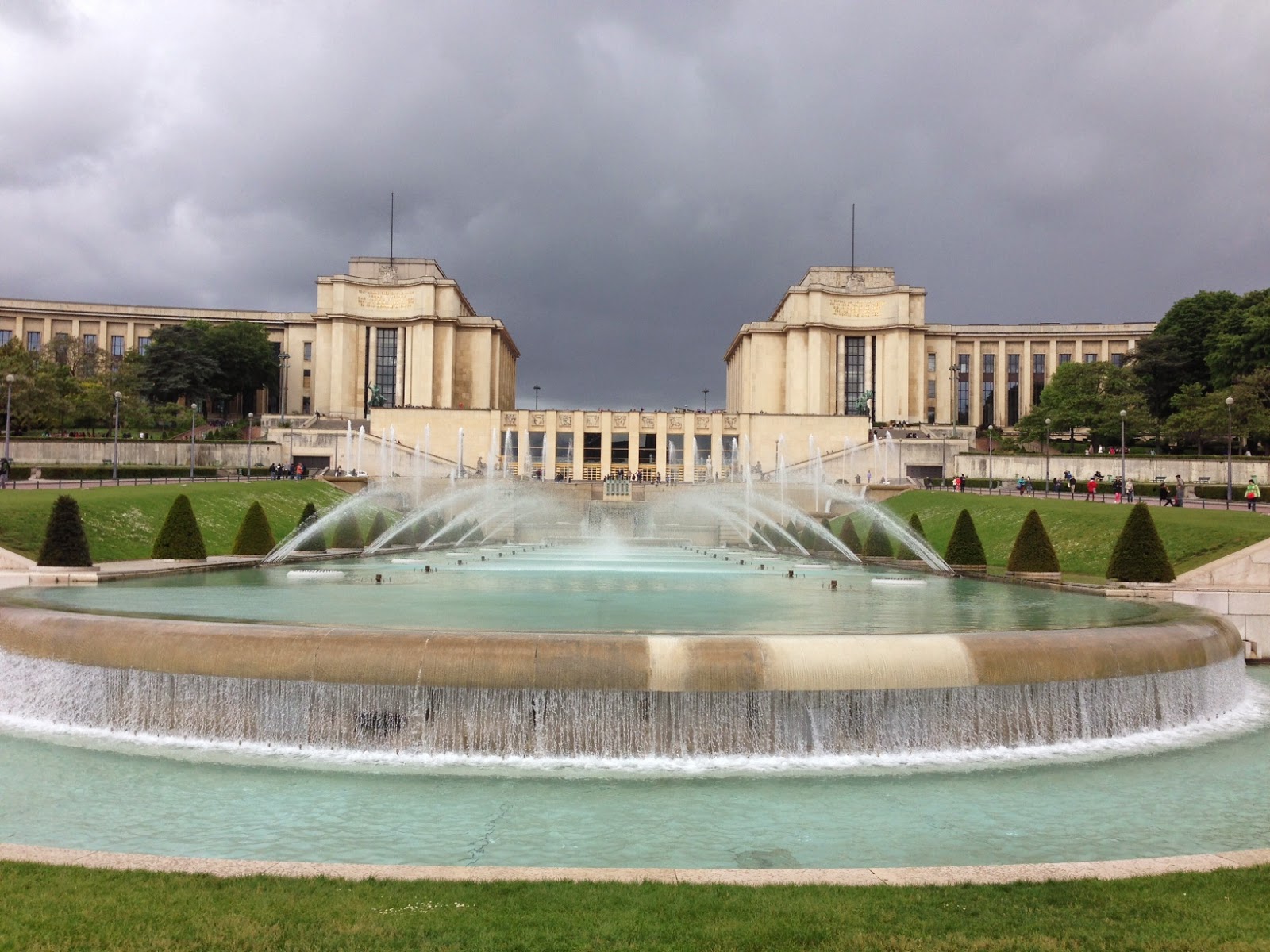 Our first Paris museum is, appropriately, the Army Museum, or Musee del l’Armee. As history museums go we’d definitely call it above average; New Orleans is still the one to beat. However, the location itself was a knockout, housed in the Hotel National des Invalides.

This museum was focused on the French military over the centuries, including LOTS of details on battles, weapons, and uniforms. It covered ground from the mid-1600’s through WWII and had a nice mix of media. Dan particularly liked the displays that showed detailed battle strategies and outcome blow by blow. I only did a couple of these but he did just about all of them. He walked away from Waterloo saying “Napoleon could have won! Just one little mistake…”

A few things that struck me: 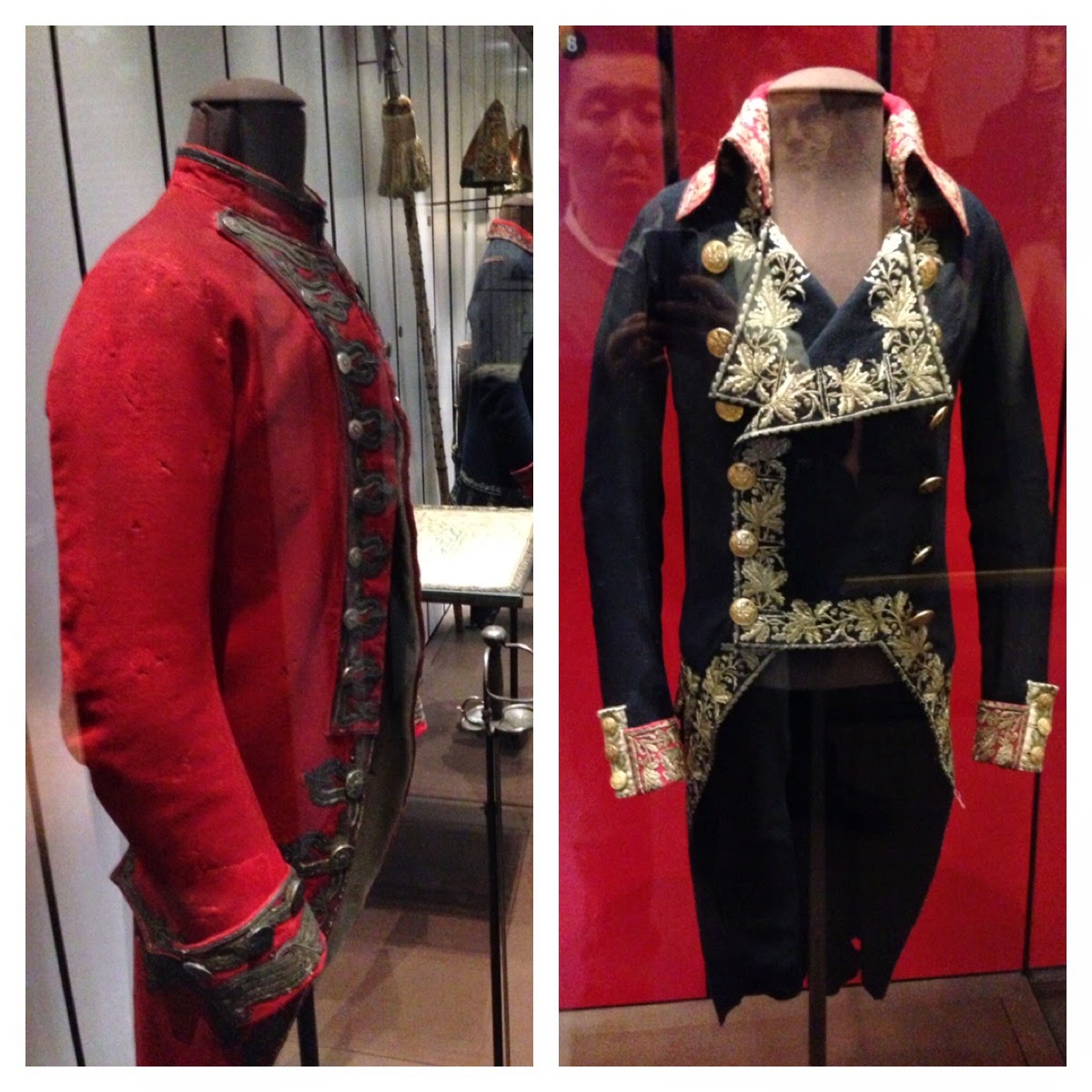 So I’d have to say the only guy the French love more than de Gaulle is Napoleon. Why else would they build such an extravagant tomb for him? 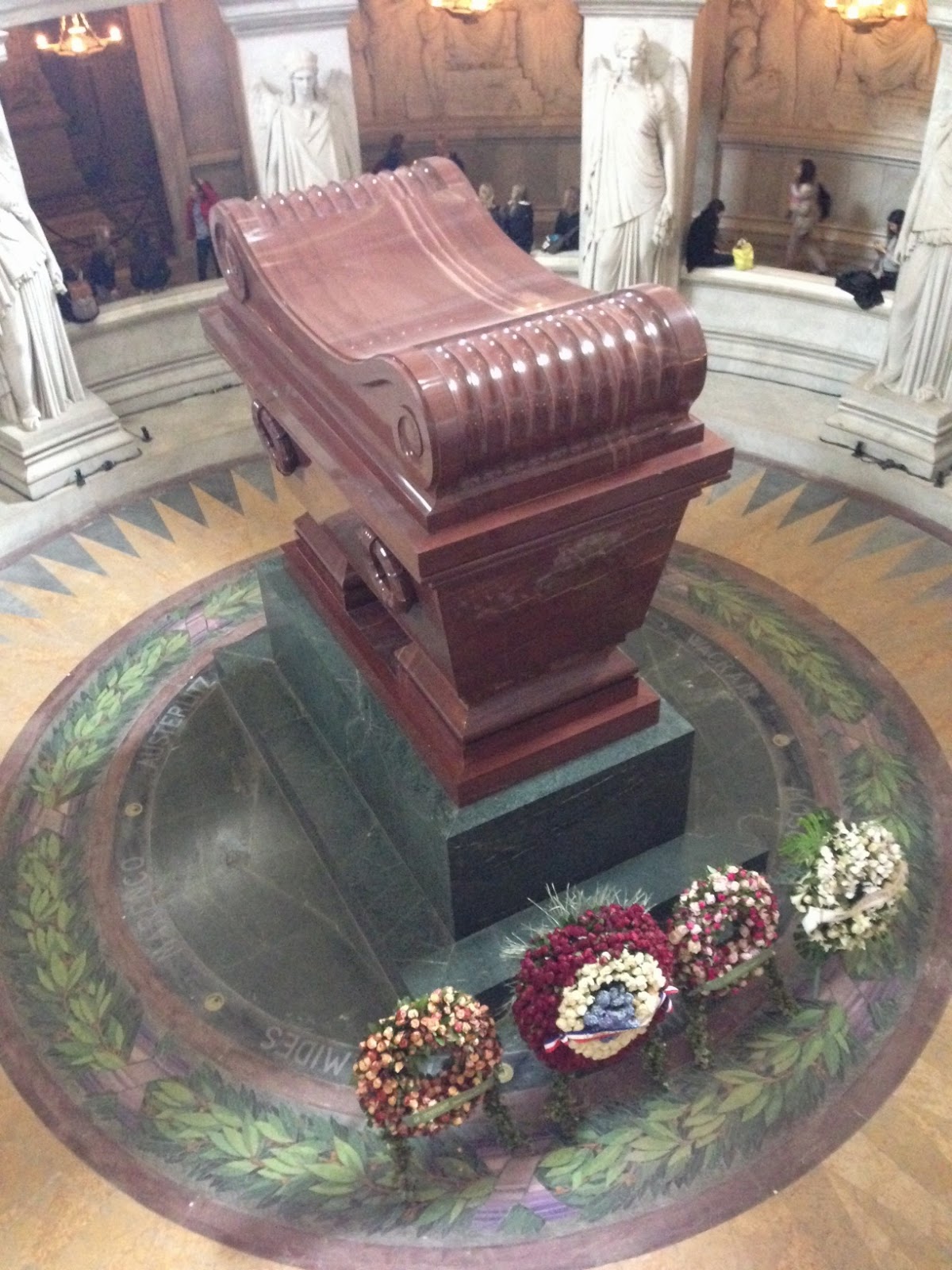 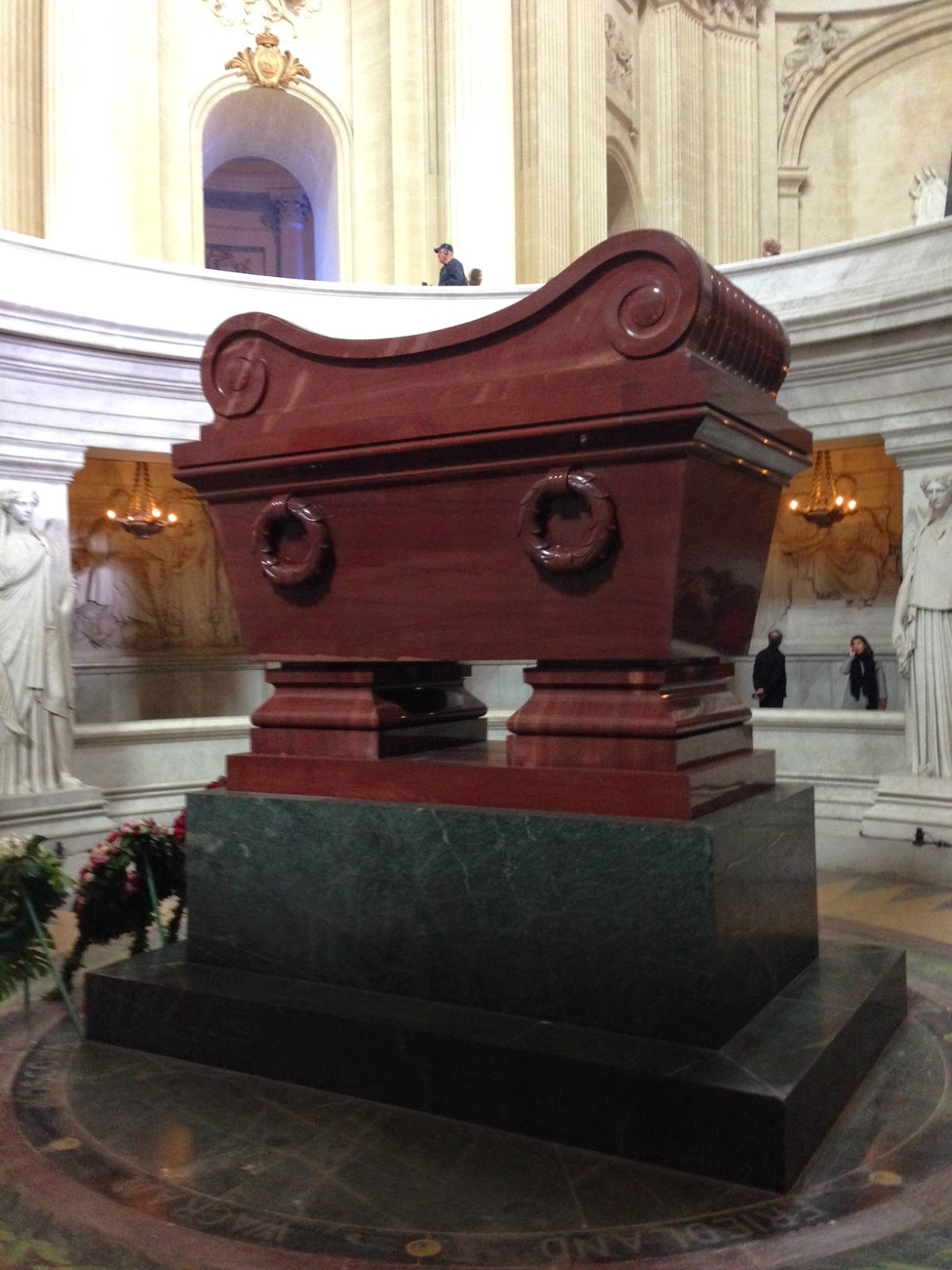 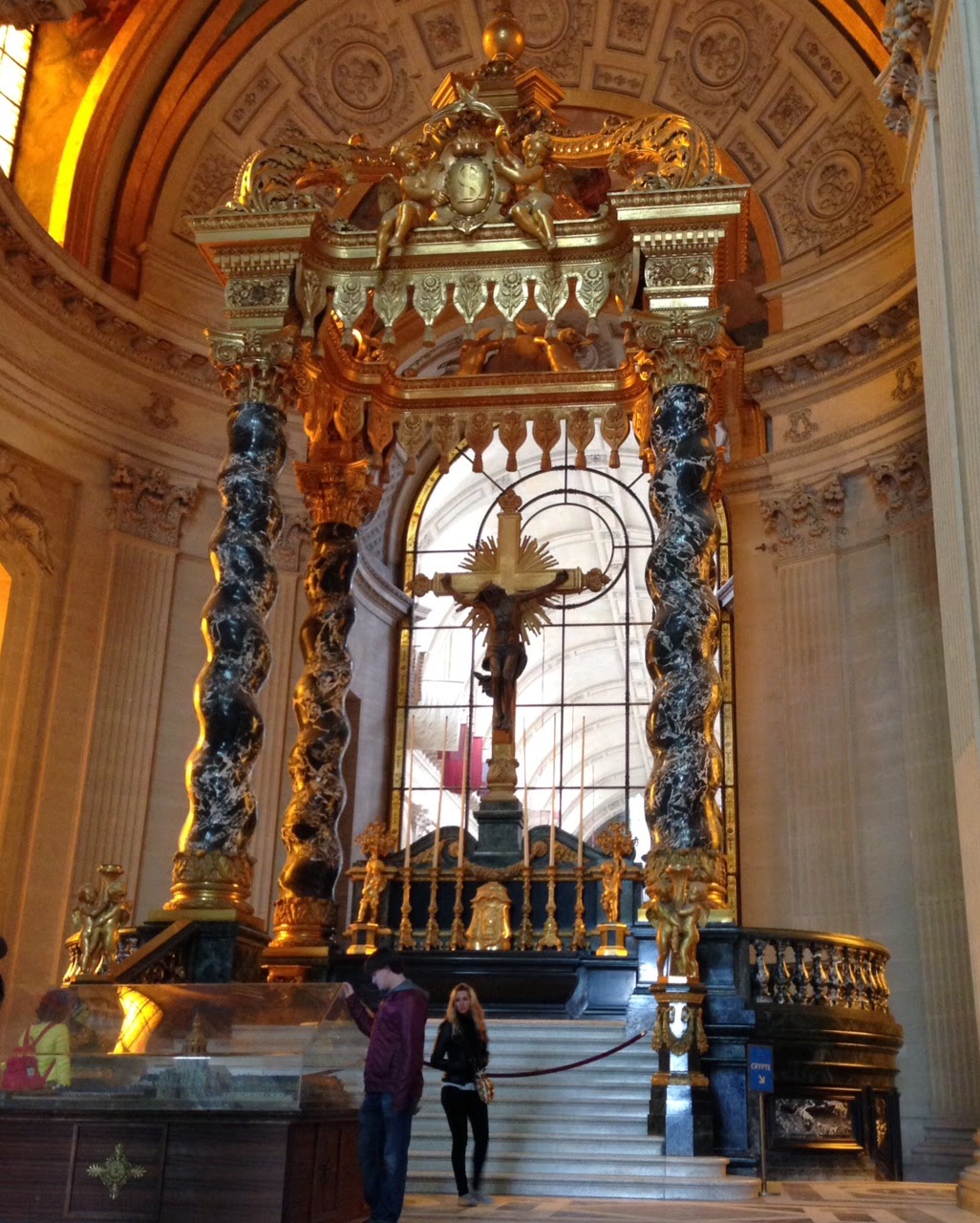 We stayed there about 3.5 hours. We did some general walking around after and decided we might as well eat dinner, it was almost 5:00pm. We found a great little French place a few blocks from here and sort of on the way to our next destination so it worked great. After dinner, we went through new streets – and again, shocked at the amount of really high end retail places. So it wasn’t just the street we were on last night. They Are Everywhere. We eventually ended up on Champs Elysees, and did a few blocks there until we got to our destination: Arc de Triomphe. It’s built to honor those who fought and died for France in the Revolutionary and Napoleonic wars, with the names of battle victories and generals carved into it. Construction started in 1806 and took several years. 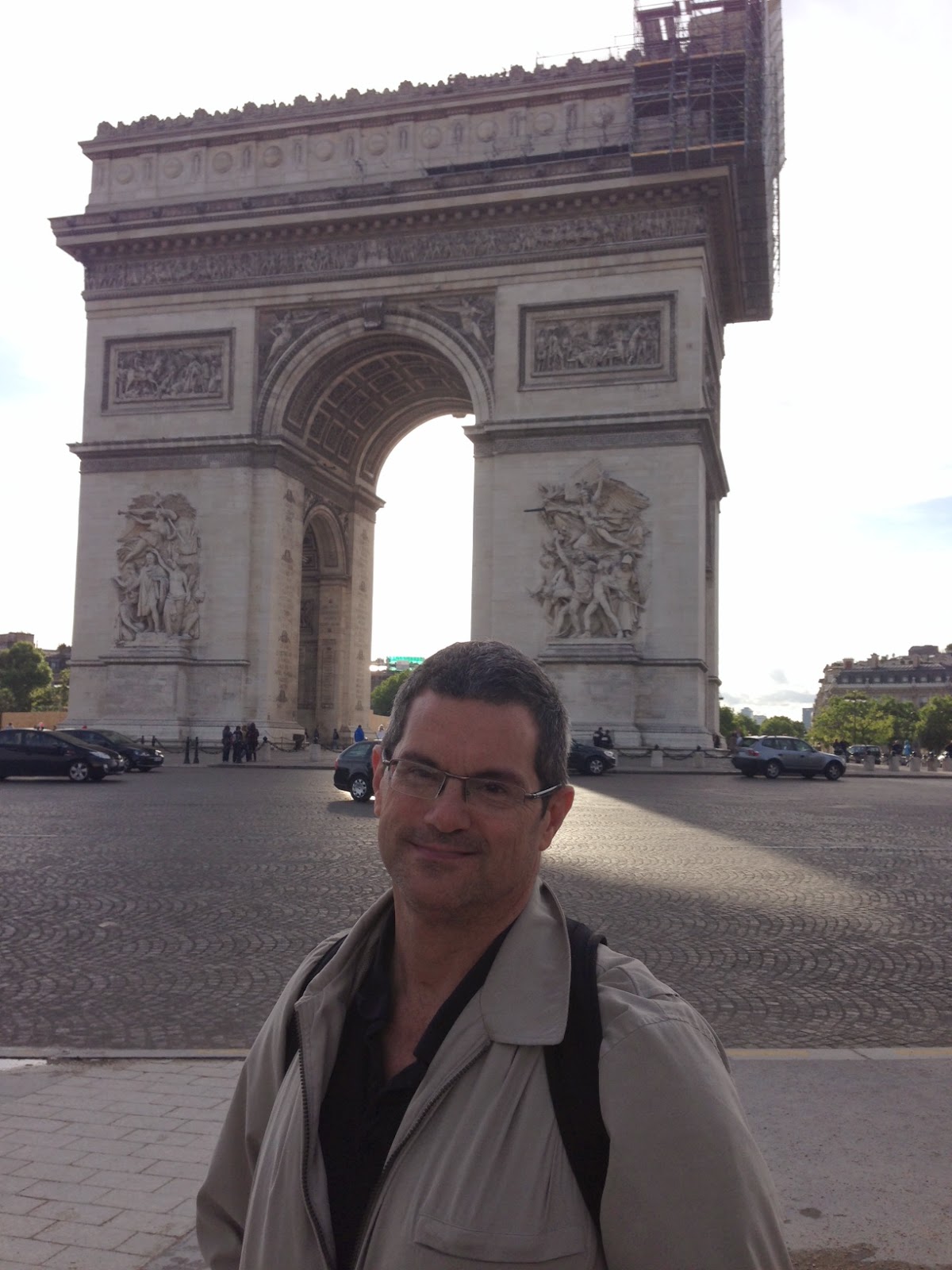 We walked up the 284 steps to get this view. This and the next 2 photos were taken in succession from the top, left to right. In the above photo, if you look carefully in the distance, middle-ish, you can see Montmartre on the hill. The Eiffel tower is at the far end of the 3rd picture. That gives you an idea how far we walked on Saturday! 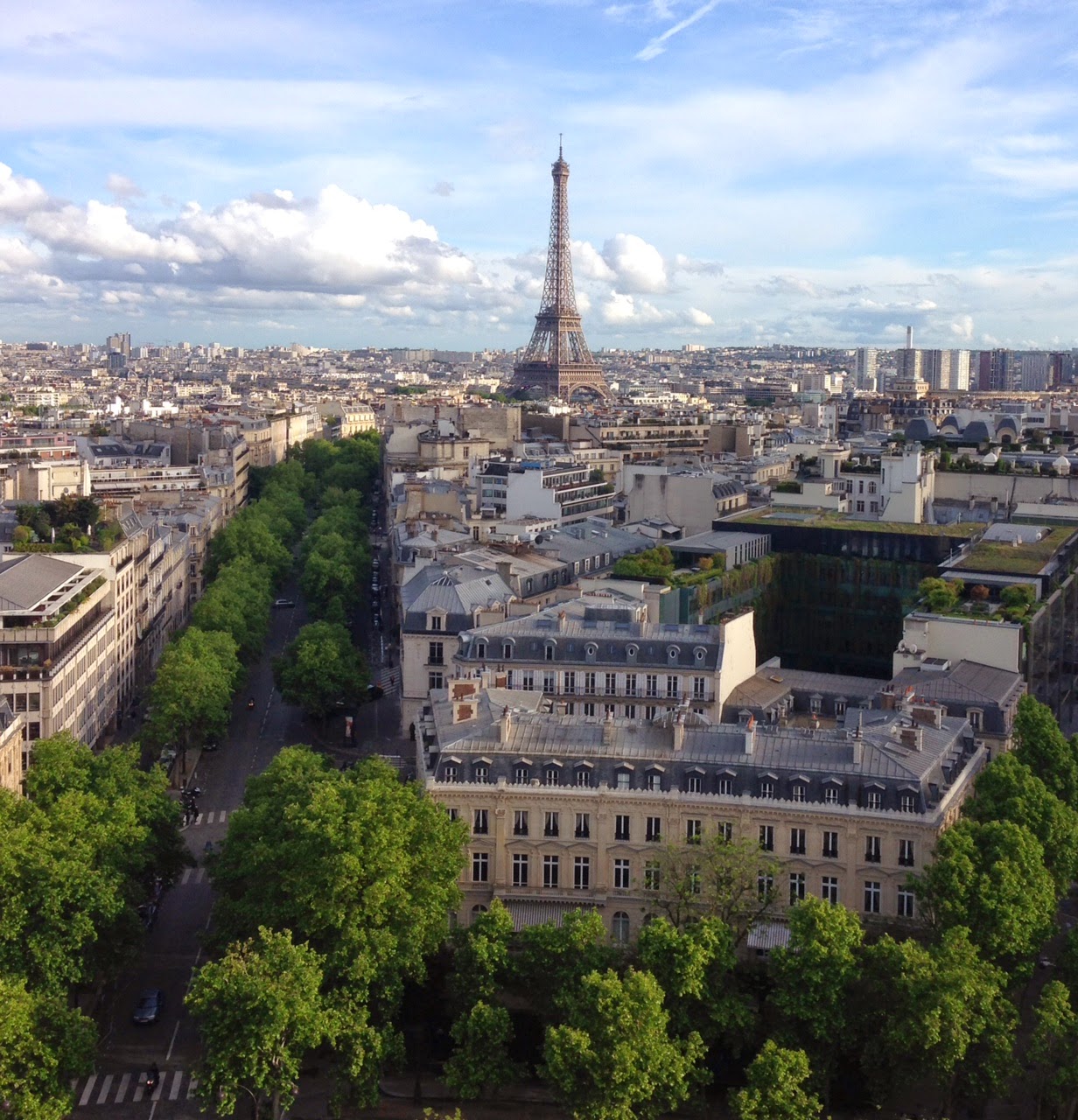 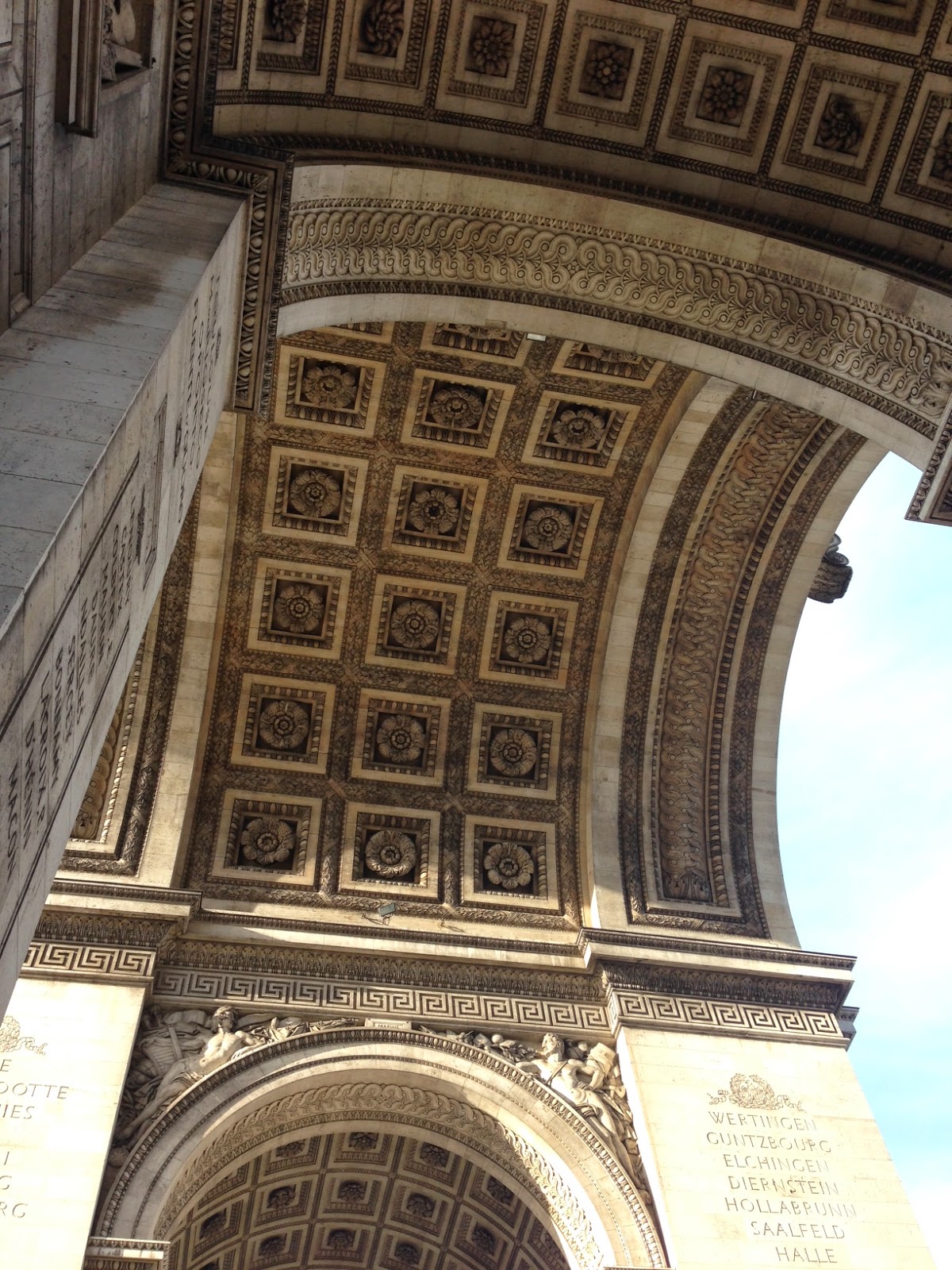 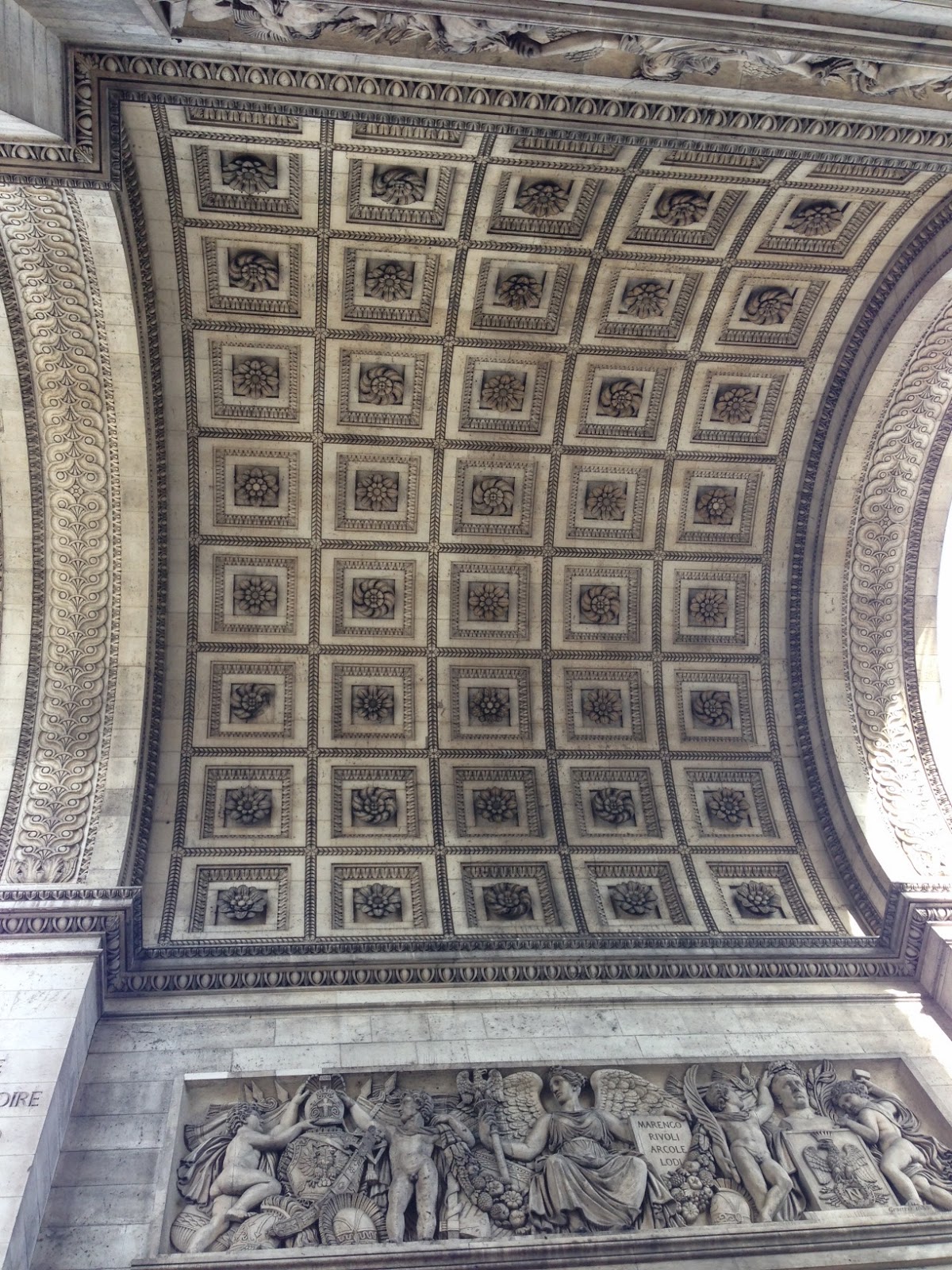 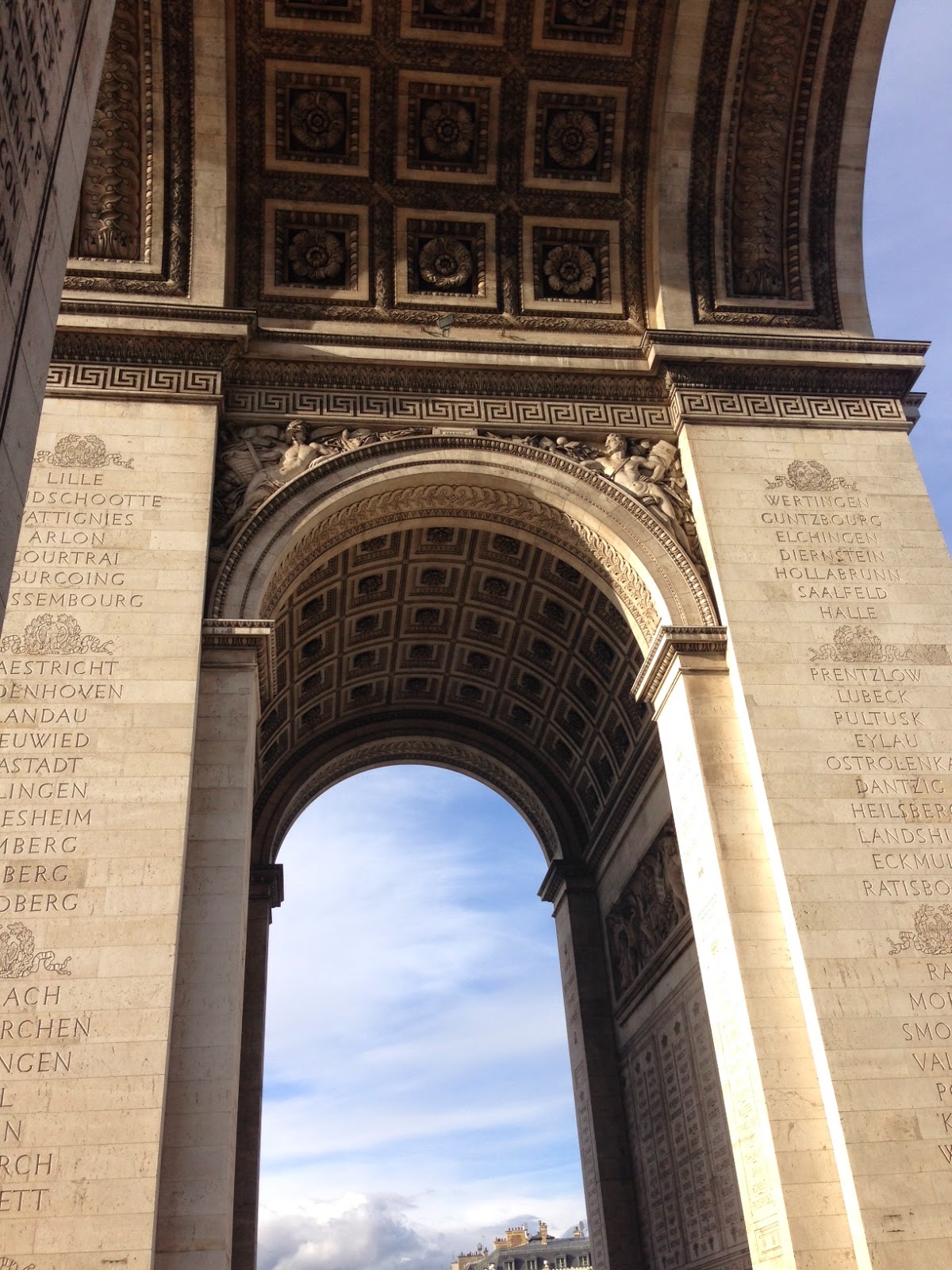 And that was Day 5. We intentionally kept it light-ish so Dan didn’t overdo it while still not feeling 100%. We were back at the flat by about 8pm. We’ve re-arranged plans again, but I believe tomorrow we’ll take on the biggies: Louvre and d’Orsay.