We left Cologne early, had a 6:44am train ride to Paris. Dan bought these tickets a long time ago, early enough to get great rates on first class, so we had a nice ride. It came with breakfast, which was nothing fancy but decent and appreciated since it kept us from having to deal with that before we left. First class also came with free WiFi which we definitely took advantage of. 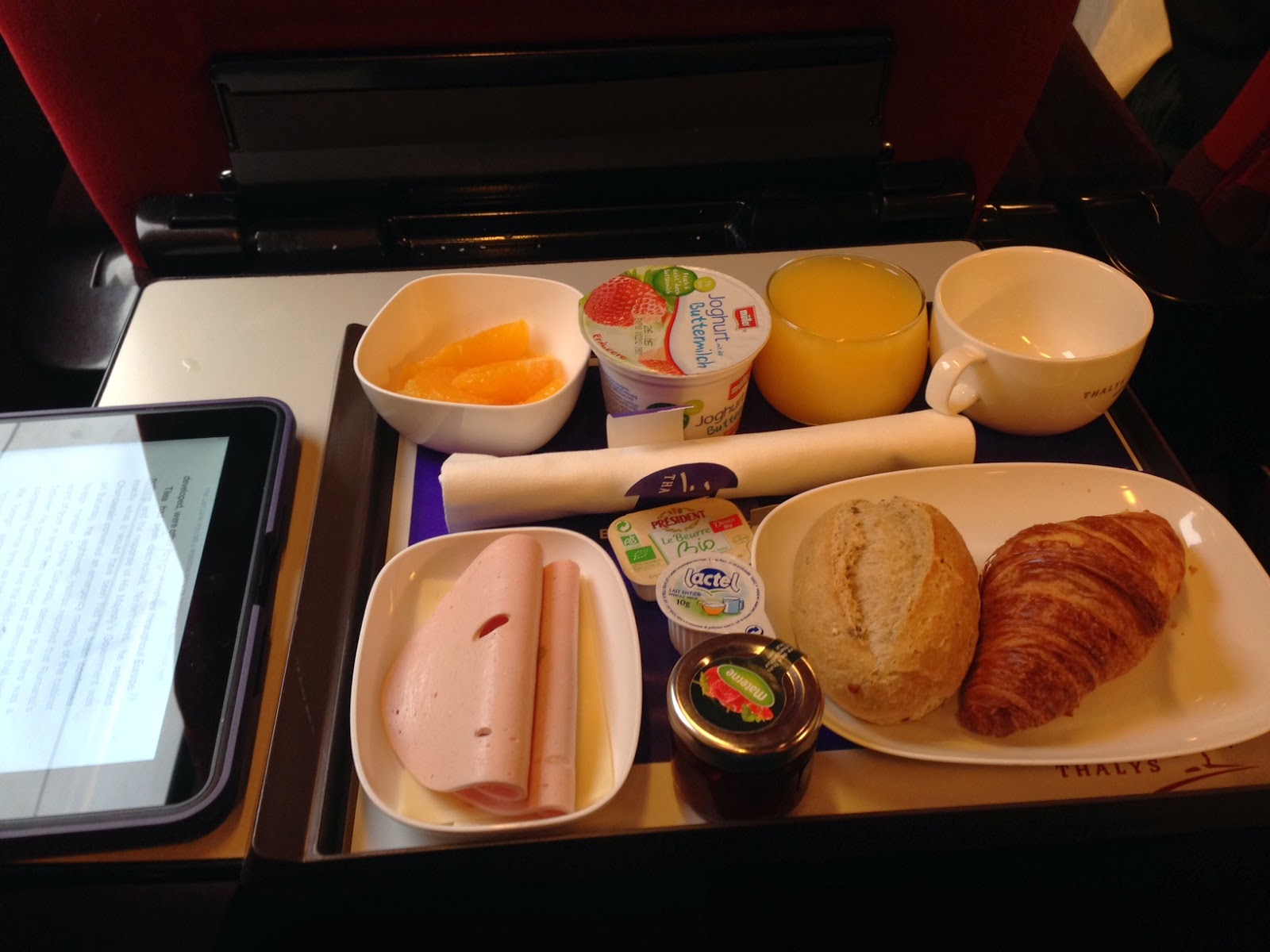 We got to Paris about 10am. We have rented an apartment for our 6 night stay here through AirBnB. (Google it if you don’t know what that is yet. We used it for all of our lodging this trip, except of course for the hotel in Cologne because that was arranged through Dan’s work.) Our host had sent us step-by-step instructions on how to get here from the train station we arrived in, which included two transfers on the Metro, Paris’s subway/rail system. There was a little confusion once we got here about who was supposed to be giving us the keys – the owner is in Spain this week on business – but it got worked out and we were up in the 6th floor walk-up flat by 11am. We unpacked, figured out how the place worked, and rested for a bit before heading out about Noon.

Our agenda for the day was intentionally planned to not do too much other than walk around. Tomorrow we go to Normandy; Monday we’ll buy a 4day museum pass that has to be used consecutively, so today was about that stuff we could do for free and just get a feel for where we were and what was where. There was only one sight we would actually go into and it was open until 10pm so we weren’t in any hurry. And it’s a good thing we weren’t.

There’s one thing that several of our friends who have been here before all warned us about: don’t over plan your day, it takes longer to get places than you think, because you’ll stop constantly to look at things, take an odd turn to check something out, etc; you need to build in time for general meandering.

We weren’t 3 blocks outside of our apartment when we stumbled upon this great Saturday morning farmers market (that’s what we would call it at home) but it was oh so much more. We decided to take advantage of it and do some grocery shopping and then take it back to the apartment, and then get on with our day. We made it back to the apartment finally 90 minutes later!, armed with 1/2 a dozen eggs, 3 kinds of cheese, 3 kinds of sausage, fresh hot paella which we had for lunch, 4 heirloom tomatoes (each a different color), a quart of strawberries, and a 9″ strawberry tart (that we cut into for dessert this evening).

So it was close to 2pm before we headed out again. I wanted to make sure we could find the place we’re meeting the tour for Normandy tomorrow morning, so we headed in that direction but took the scenic route. I think it’s appropriate that this is the first official picture we took in Paris, our first sighting of the Eiffel Tower. 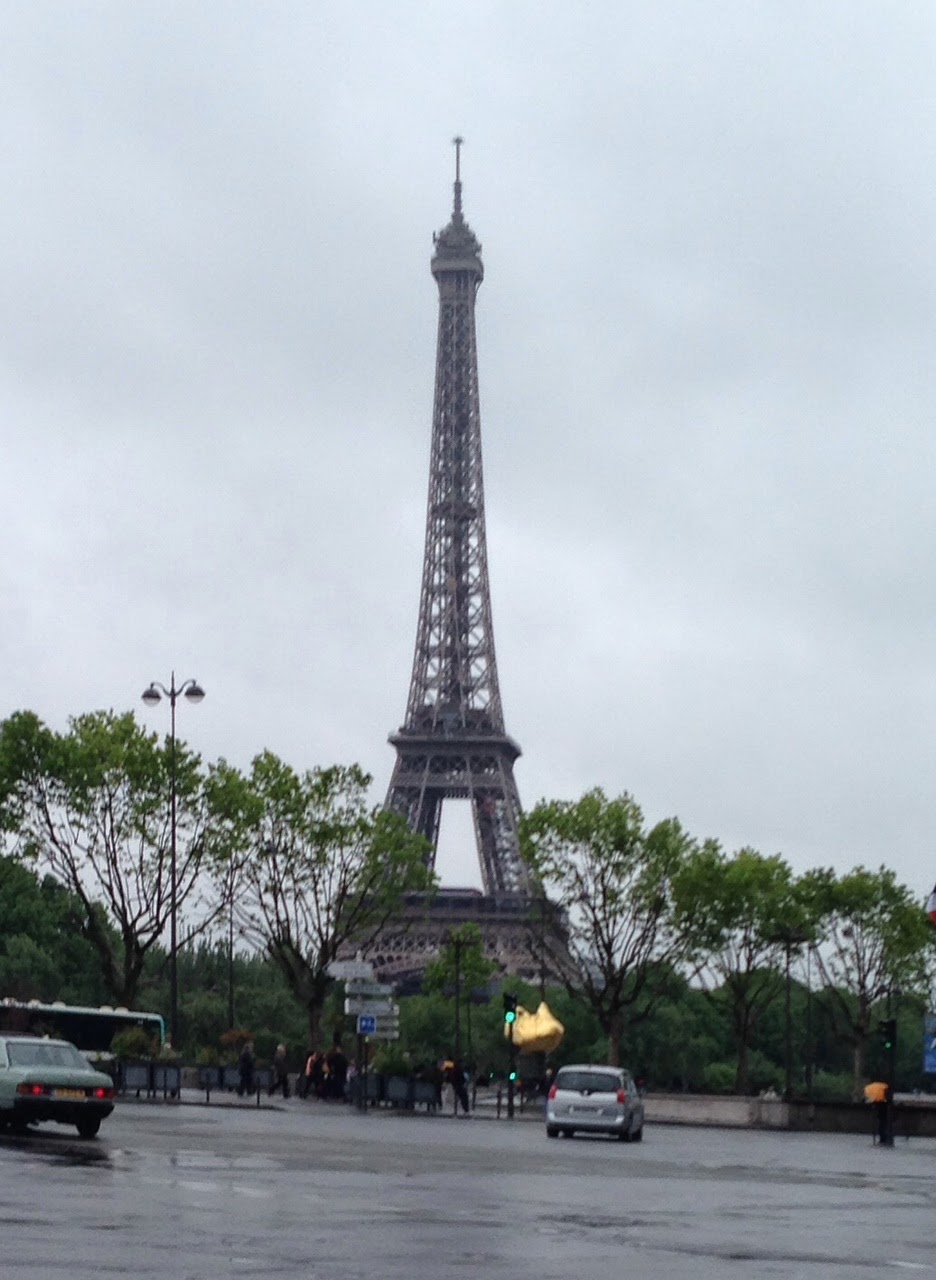 We just happened to look to our right as we were crossing the street and there it was. We decided to walk along the Seine and came across the Pont Alexandre III bridge, generally considered to be the most ornate bridge in Paris. We were familiar with this bridge only because on our trip to Amsterdam last year we’d seen a replica of it (although not as well done of course). 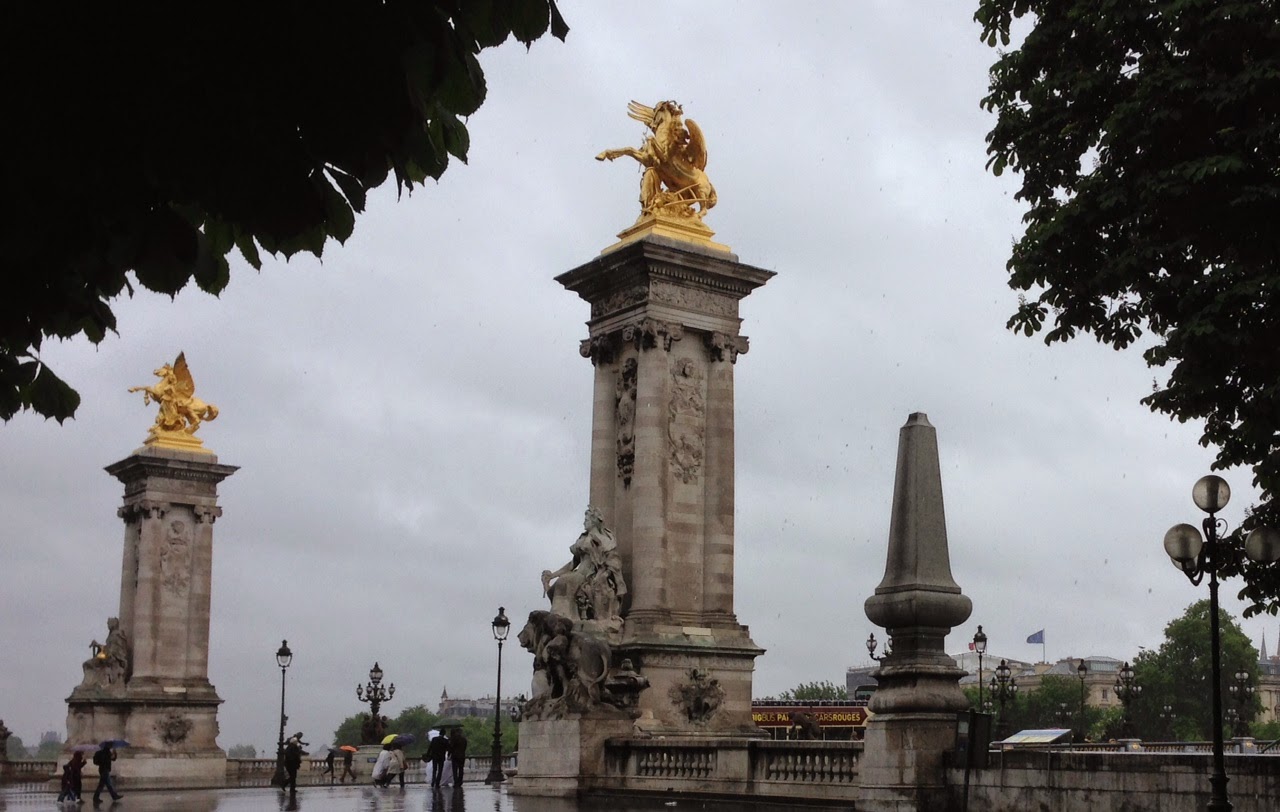 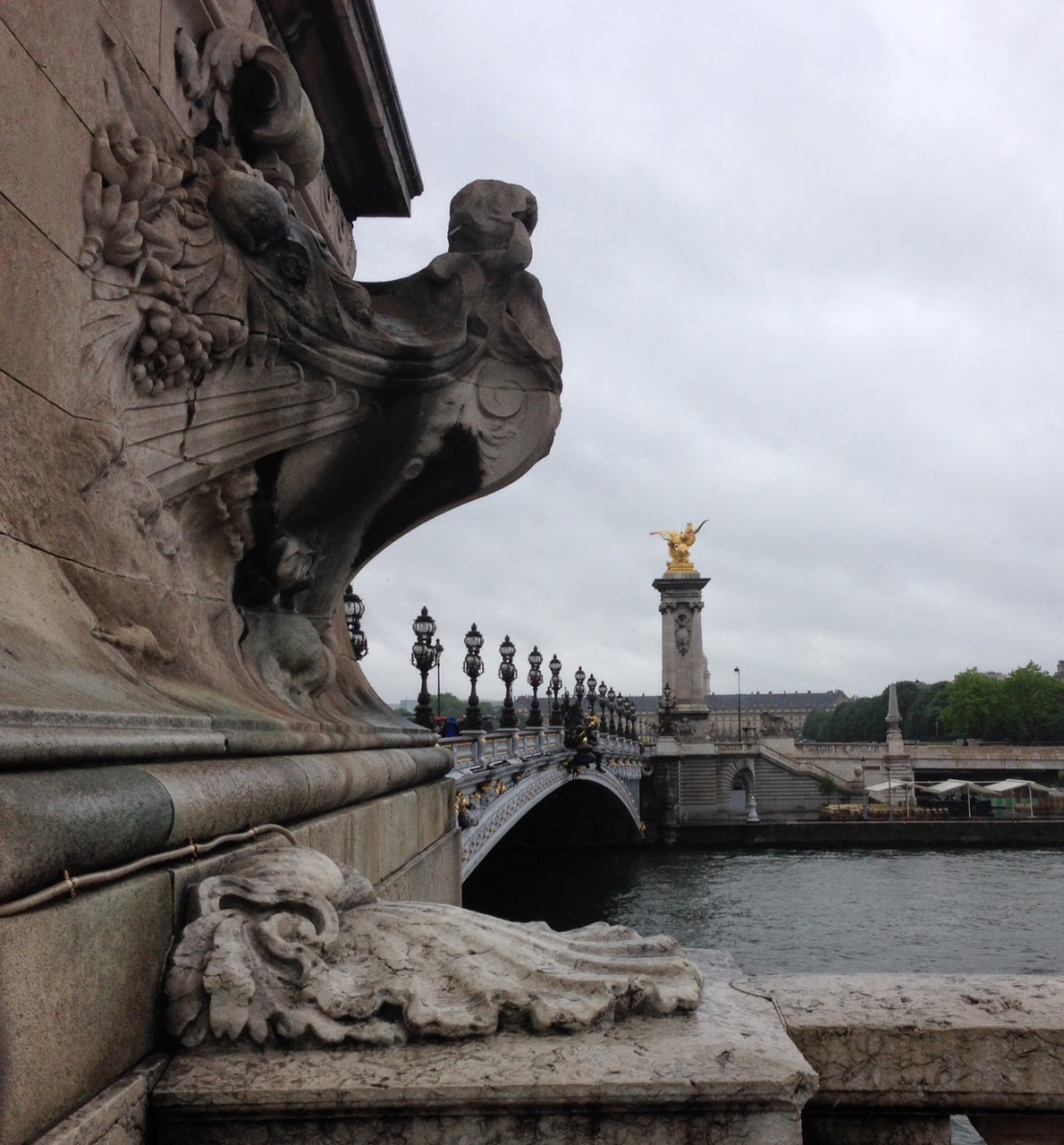 We kept going and stumbled into the Jardin Des Tuileries – Tuileries Gardens – which is this really amazing park along the river next to the Louvre that’s full of gardens and sculptures. We’d barely been truly out in Paris 30 minutes and had seen such a small sliver of stuff, but Dan was already remarking about how impressive it is that the city has put so much art into public spaces and how much it adds to the beauty and personality of the city. He’s hard to impress and Paris got him early! The next few pictures are some shots he took from this park. 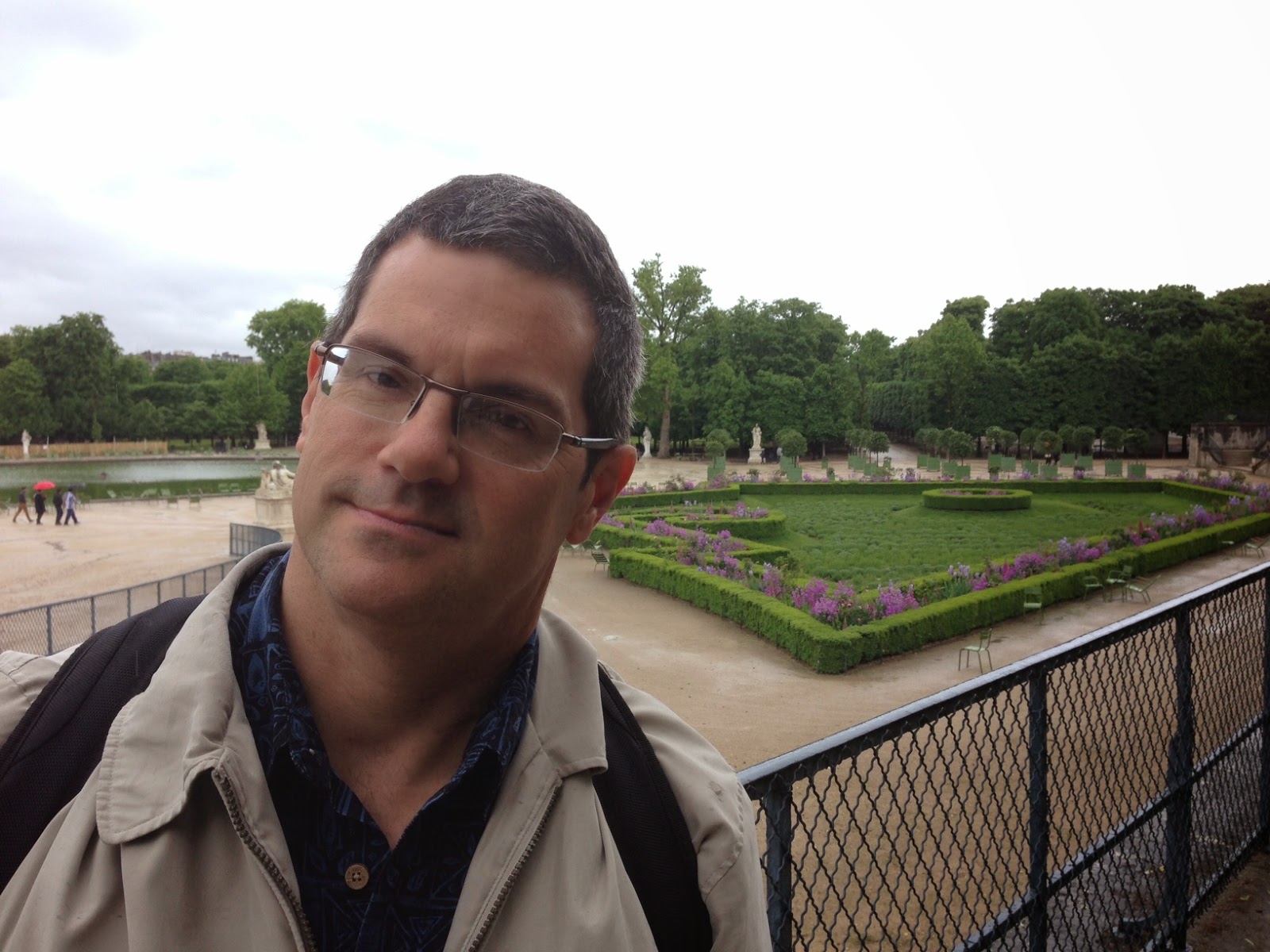 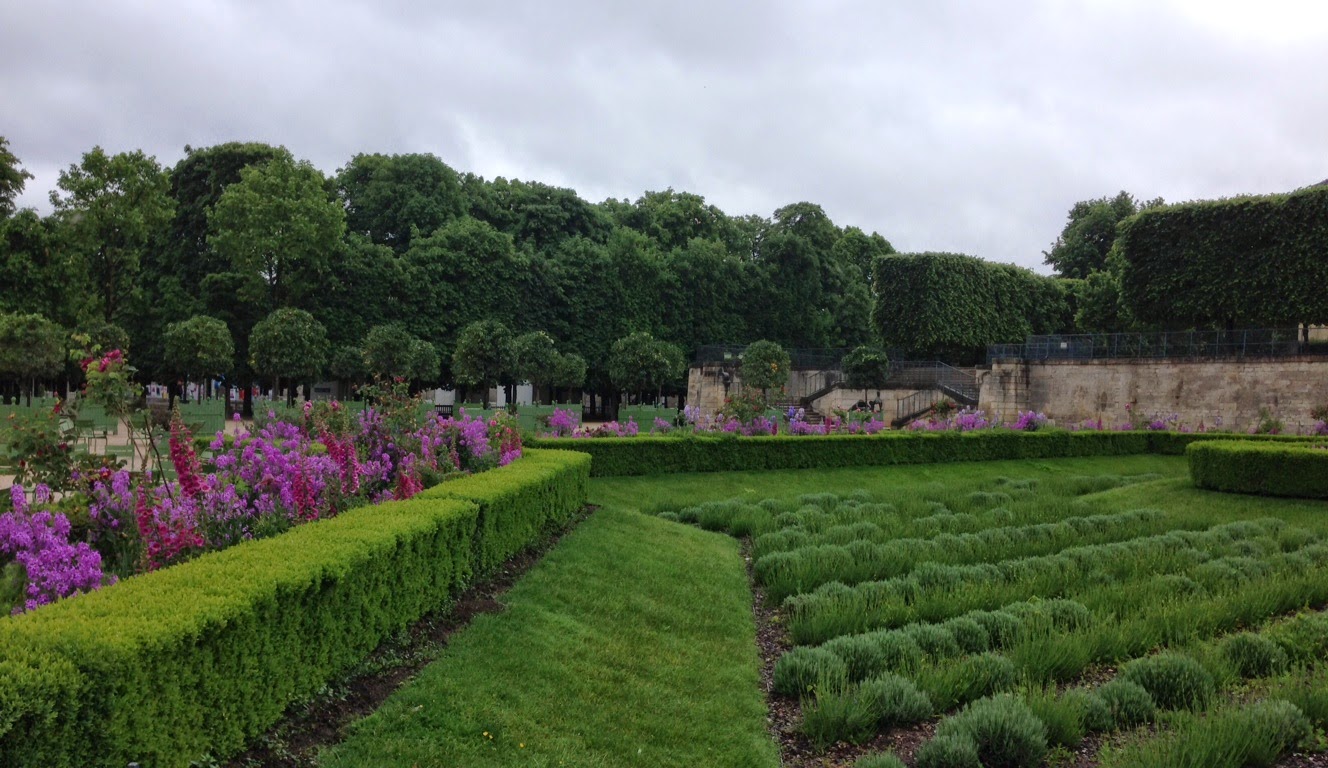 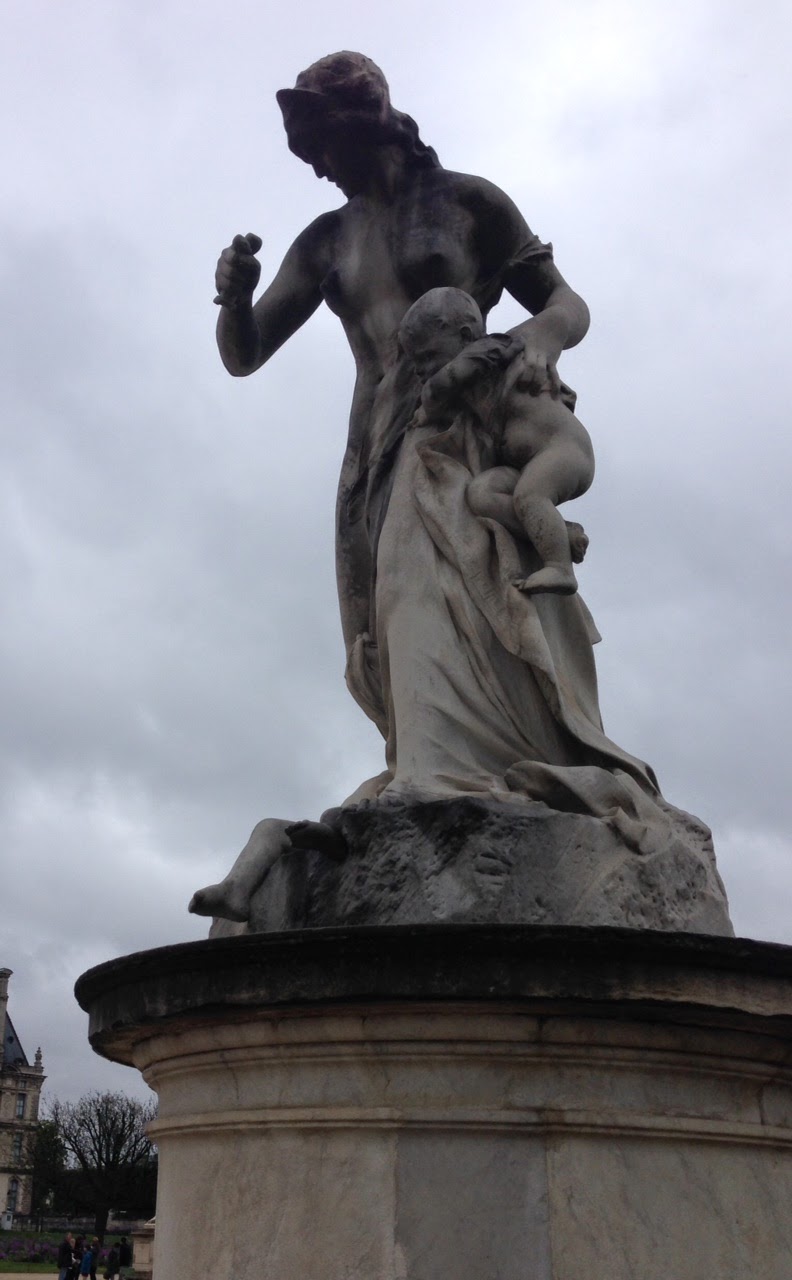 In the bottom left of the above photo you see a of piece of the first building we’d come across in awhile. It was massive and beautifully designed. Dan said “I wonder what that is?” I said “I think it’s the Louvre.” And it was. We got out of the park, found our meeting place for tomorrow morning which is essentially across the street from the Louvre, and continued our meandering. We are planning on going to the Louvre on Wednesday – a morning and evening shift, actually! – but couldn’t resist getting a peak since we were walking right by it. This is what we saw. 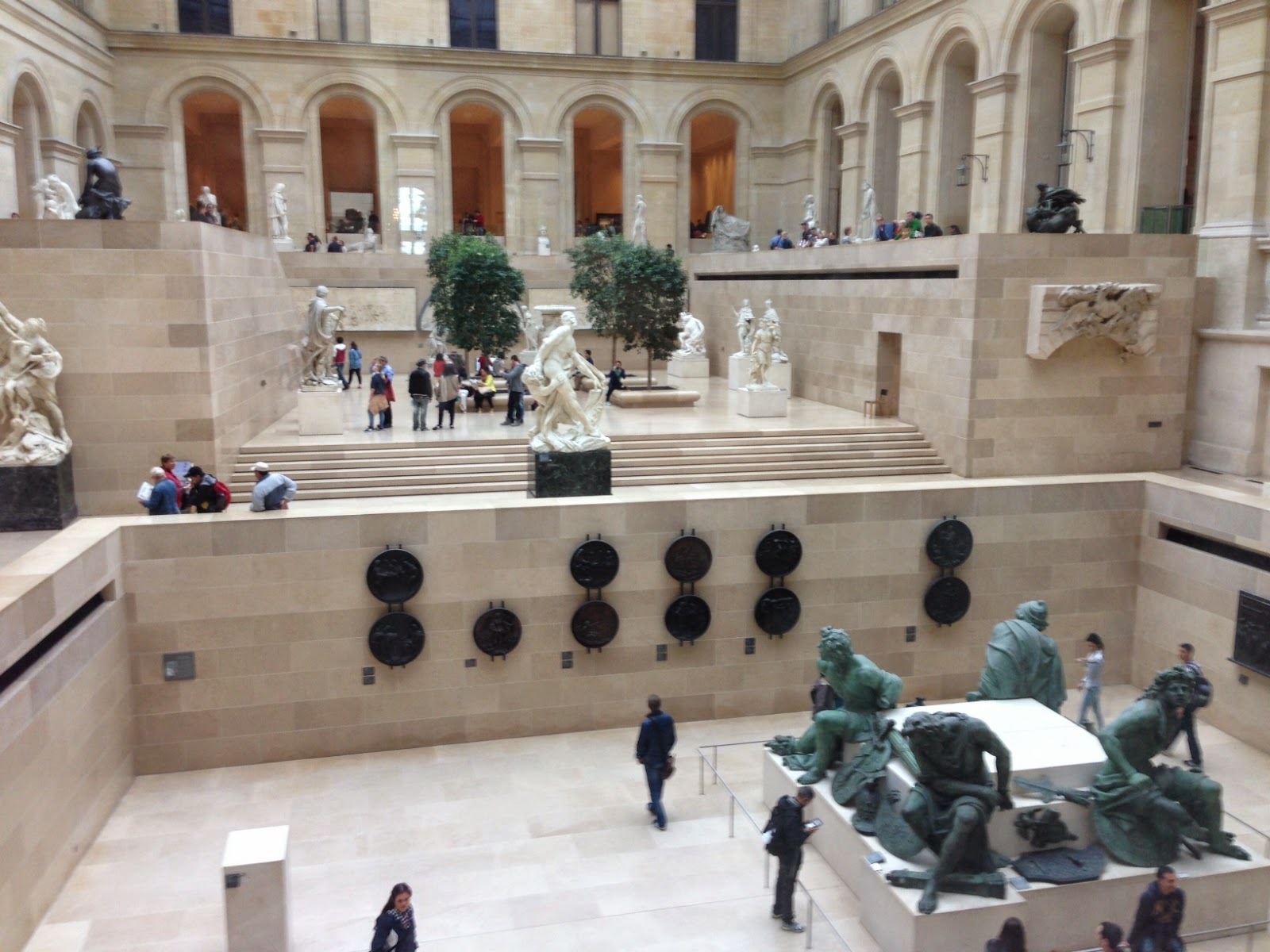 As you’re walking in from the street you’re in this huge open area where lines form for tickets, etc. But there are windows into the museum on either side – Dan called them teasers – and that they were. This was the view from one of them and we were suitably impressed. Never seen anything like it; it’s absolutely stunning. So we continue through this covered area into the courtyard – where the gawdawful glass pyramids are; really, what were they thinking? – but the rest of the building is amazing. I wasn’t prepared for the size. I’ve seen pictures of it a million times but they just don’t do it justice. Here’s another that won’t. Pay attention to the small people at the entrance and you’ll get an idea of scale. 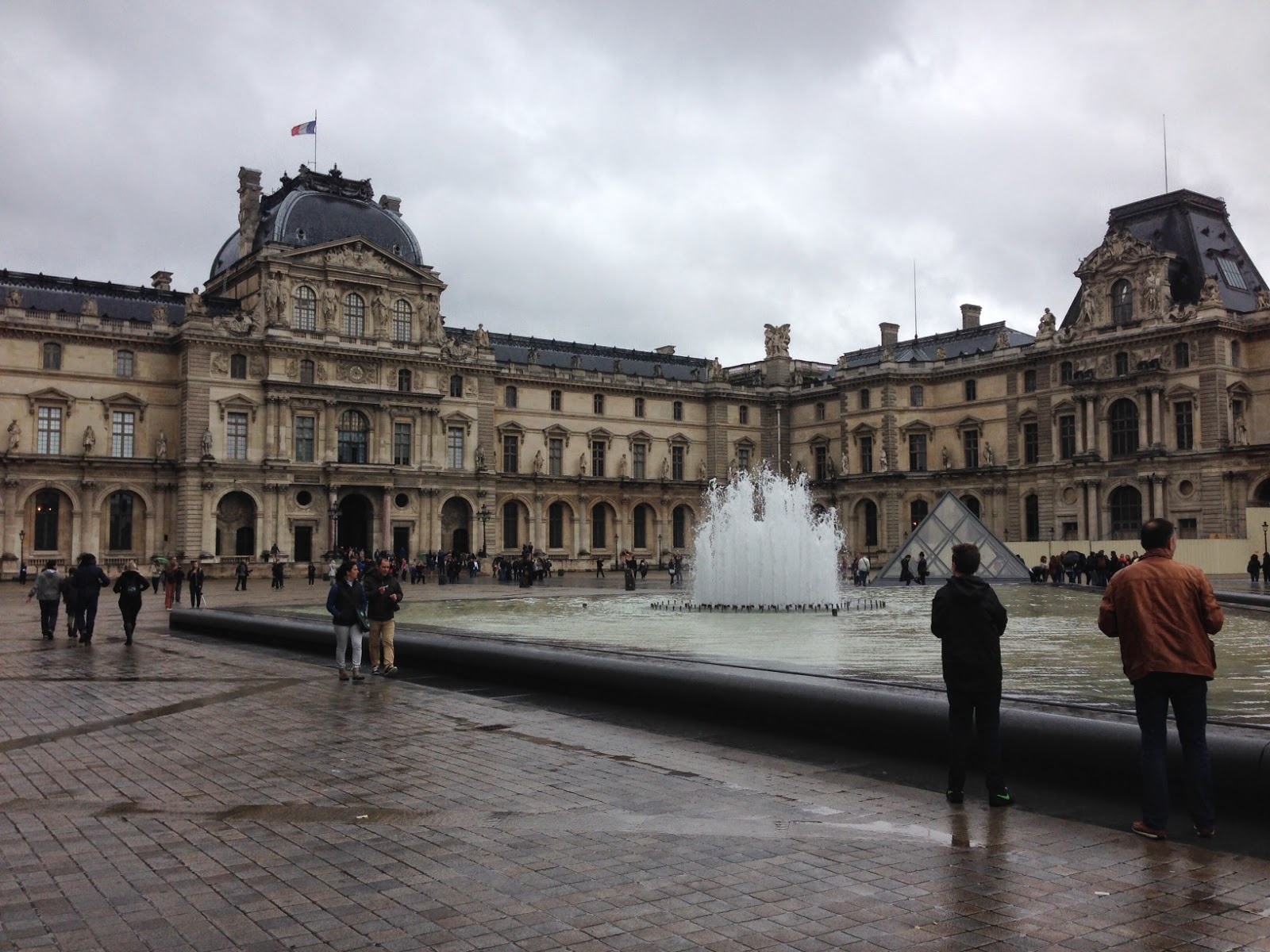 Next we were headed to the Latin Quarter, one of the two neighborhoods we were going to explore today. We passed Notre Dame on the way and couldn’t resist a couple of photos there, either. 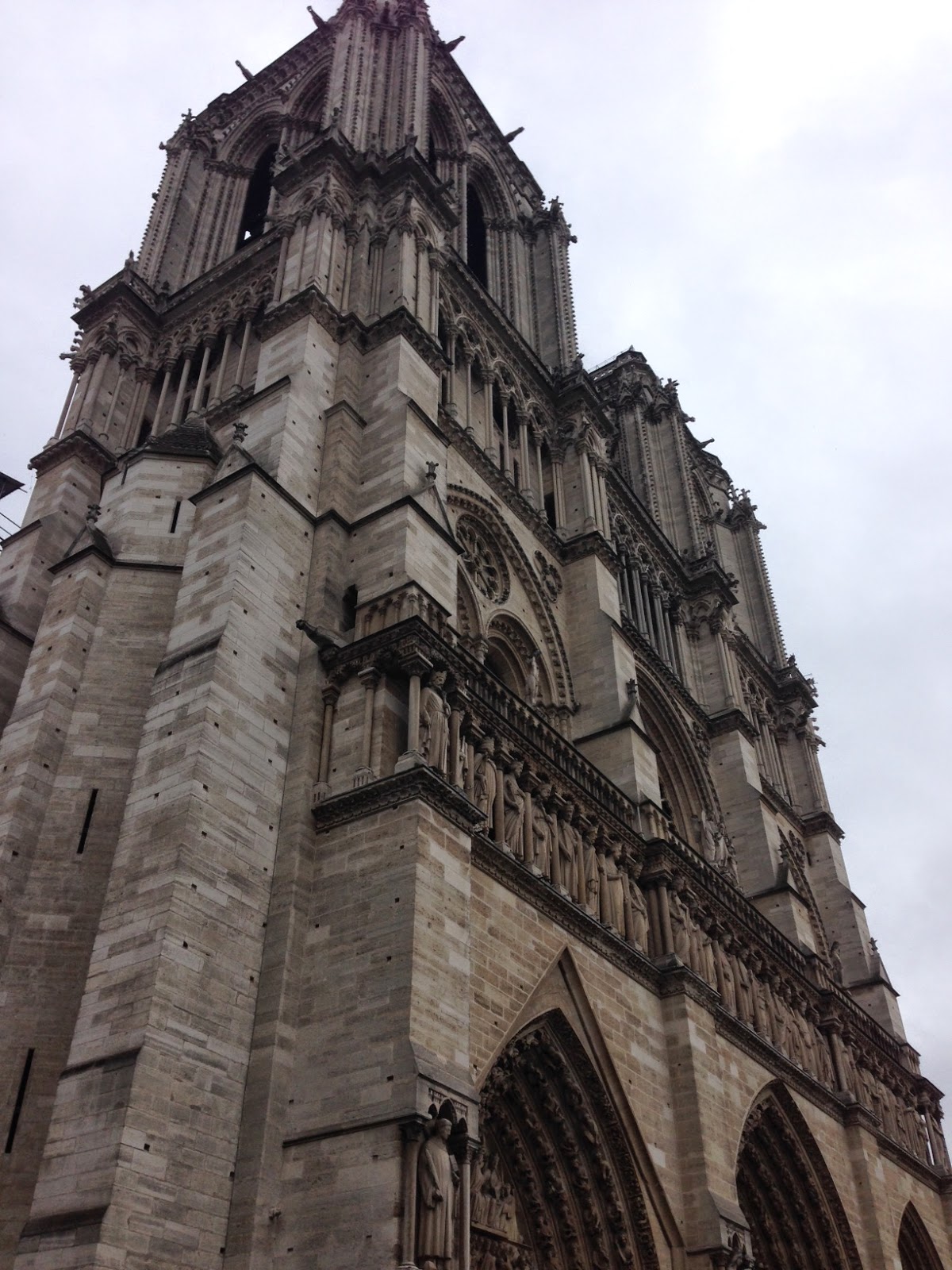 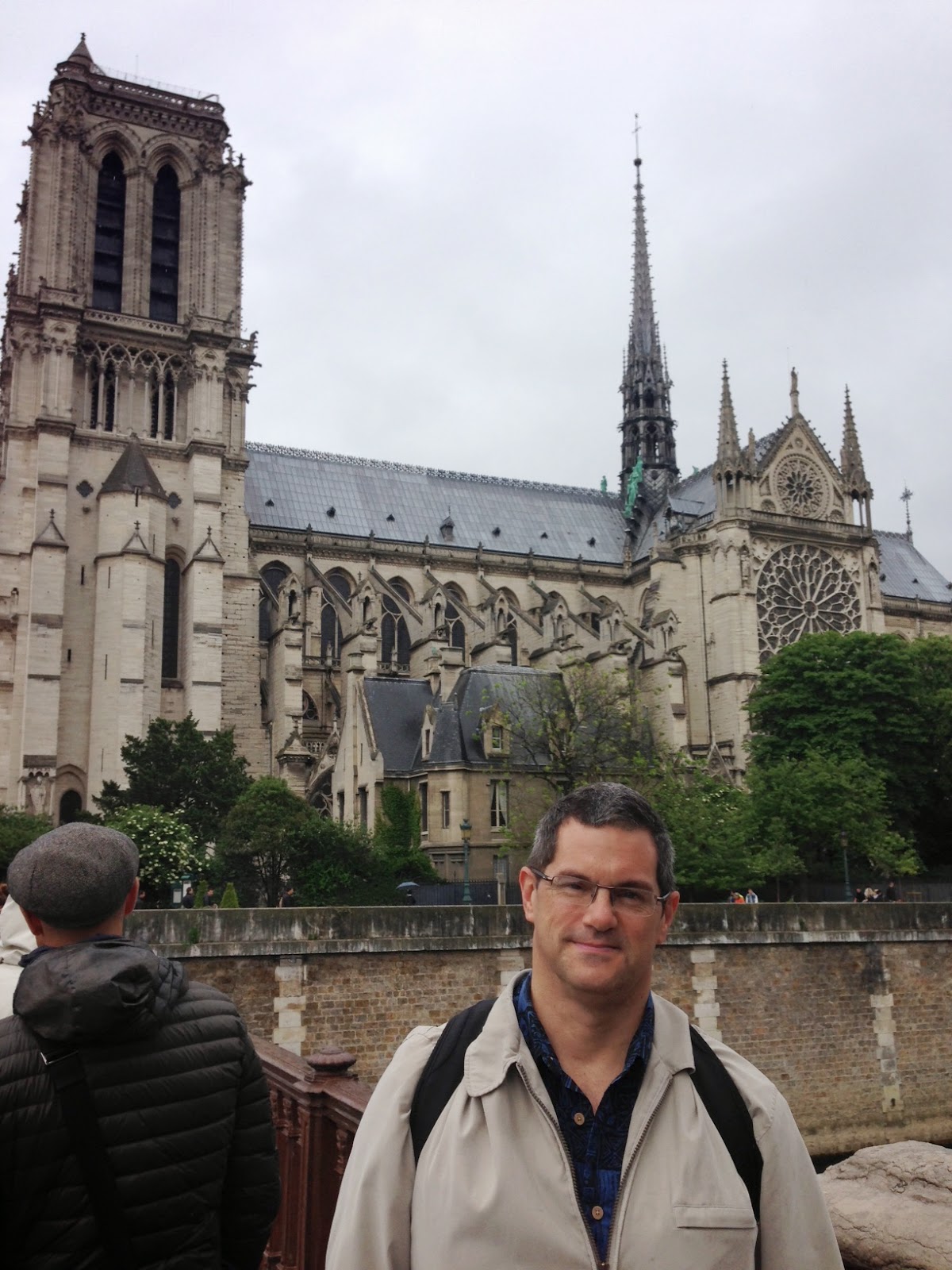 This was a creepy looking sculpture Dan liked in one of the many parks we came across today. I believe this was just across the river from Notre Dame. 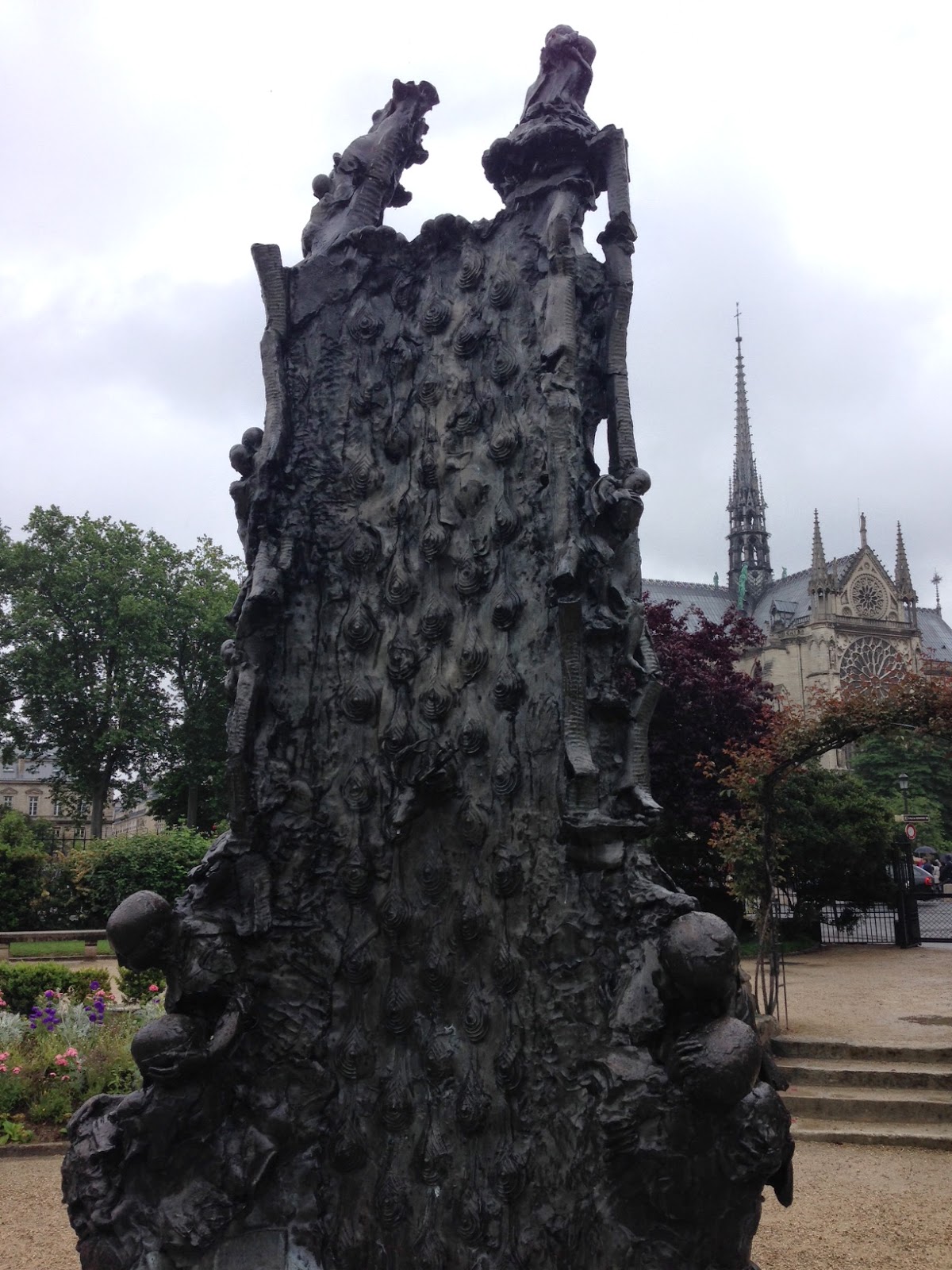 We continued meandering the Latin Quarter and really enjoyed the neighborhood. It got less touristy, lots of narrow streets with interesting shops and restaurants. Eventually we came across a tree-lined avenue – we saw many of those – and came across this. We just thought it was pretty, then quickly figured out it was the Sorbonne, a Paris university.
There was a nice cafe directly to the right of where I’m standing above, and we stopped there for a coffee break. Or in Dan’s case, tea. He captures me without me knowing it. I didn’t see this until I got back to the apartment! 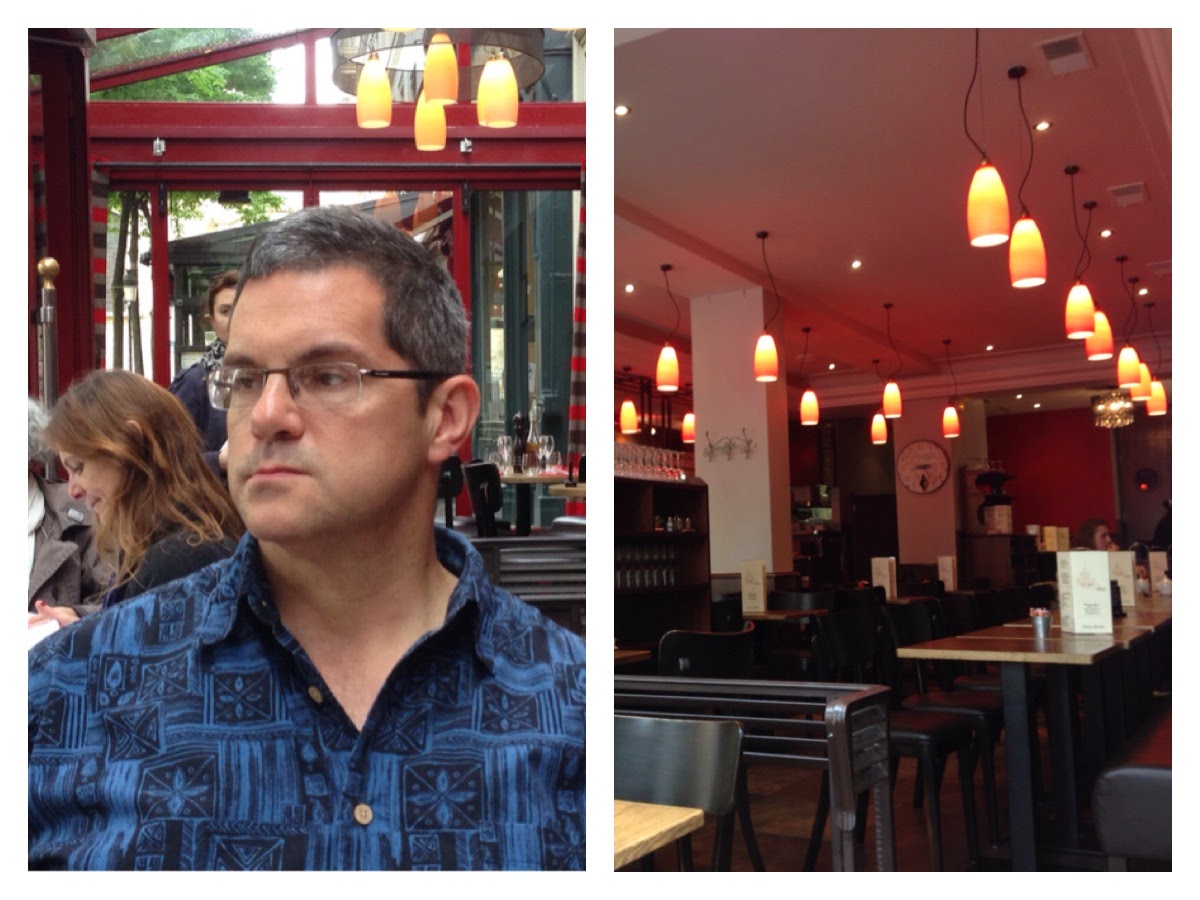 We went by the Pantheon after this but there is serious renovation going on so we didn’t take any photos. Then we headed to the 2nd neighborhood for the day, Montmartre. We decided to walk because that’s just our preference unless time is an issue and it wasn’t. It was 3 miles north of where we were so it took a little over an hour. We saw a lots of stuff along the way, thoroughly enjoying just being there. One of our random turns down an alley took us into this church where some organ playing was happening, so we stopped in and listened to that for a few minutes. Dan has never met a church he didn’t want to take a photo of.
We eventually got to Montmartre, which has a personality all its own for sure, some of it kinda wild and trashy, but we found a nice quiet French restaurant on one of the side streets that turned out to be pretty good. When in Rome and all that, we had escargot for our appetizer and they were excellent. 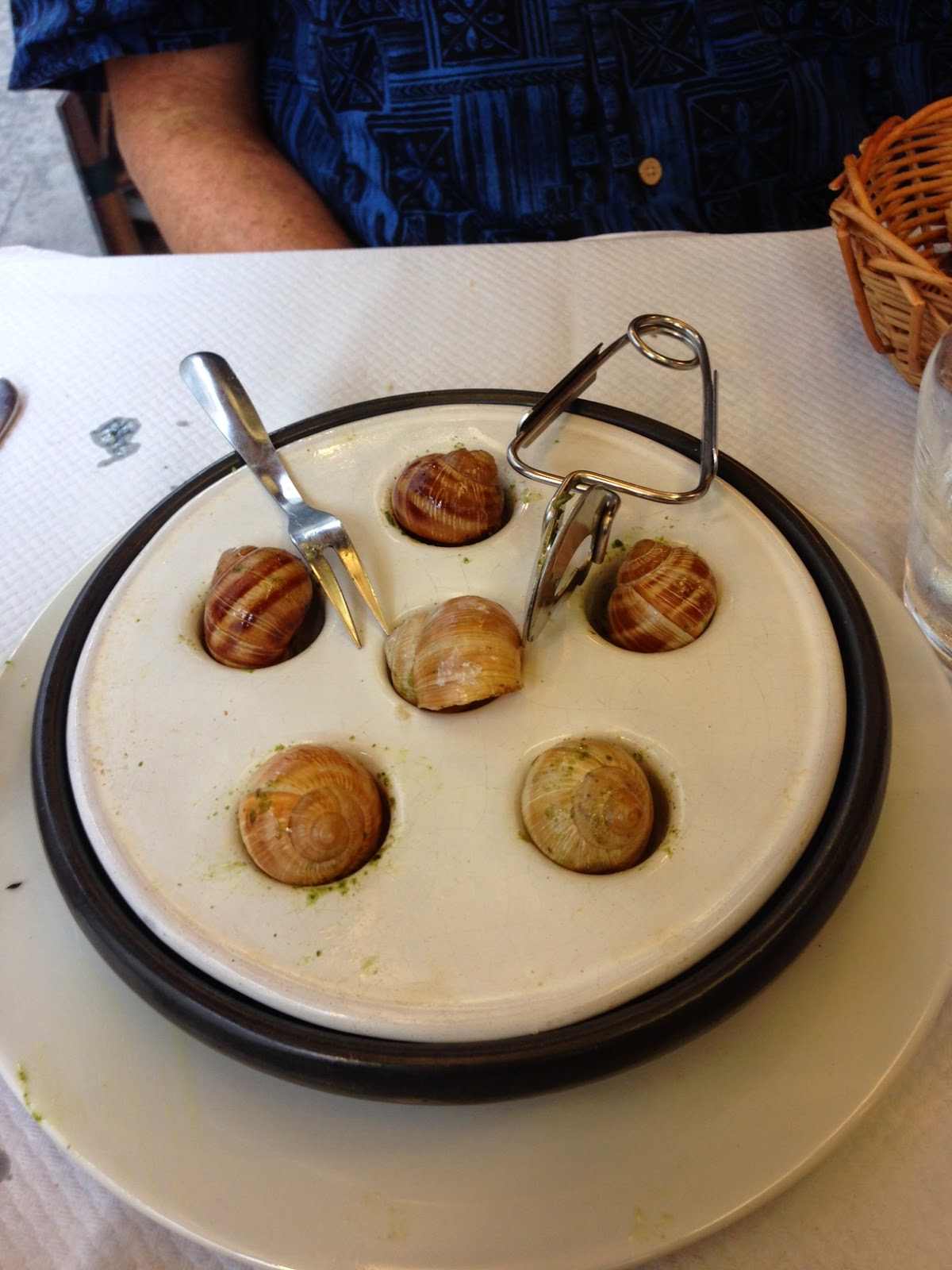 From there we made our way up – way up – to the Basilica of the Sacre-Coeur. The steps made it easier. This is me going up – if you look close enough – and coming down. 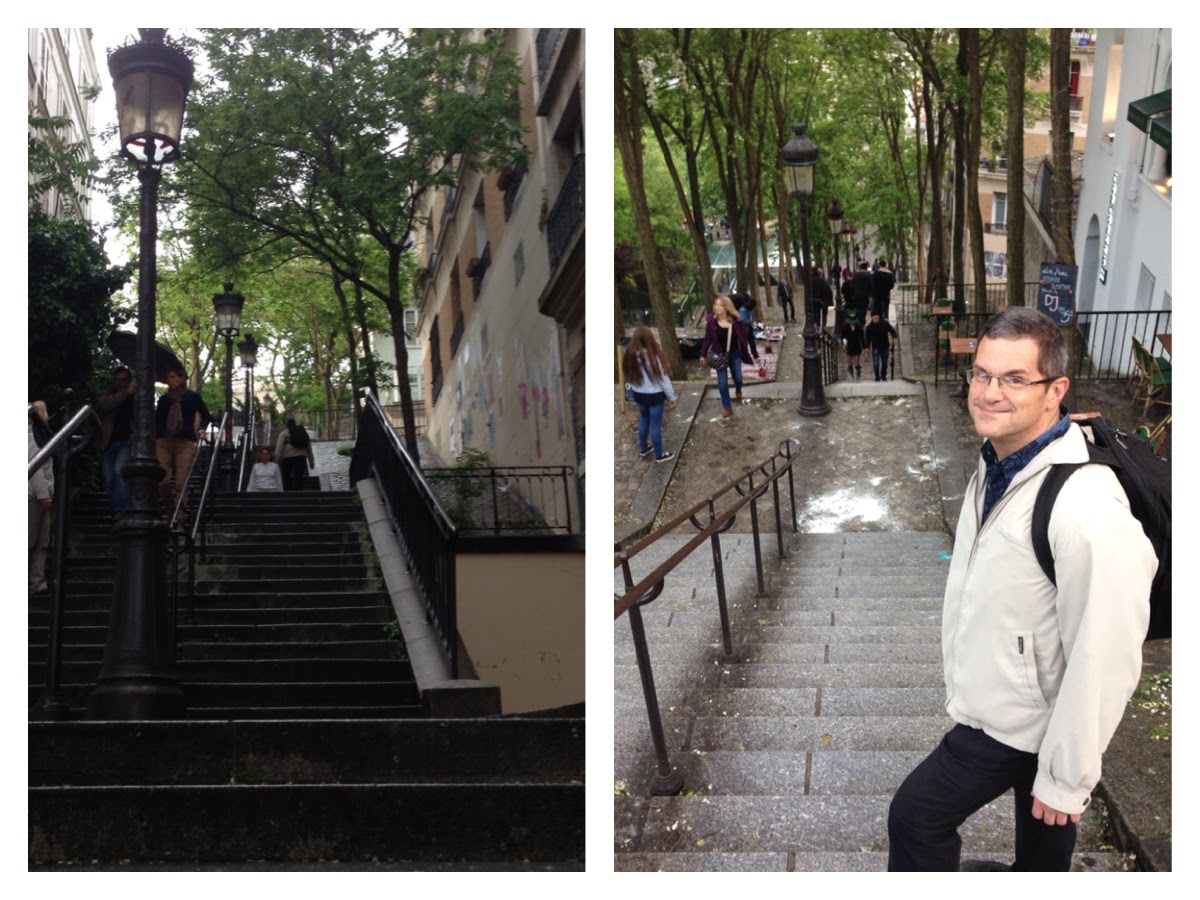 But it was worth the climb. Here’s what you saw once you got there. 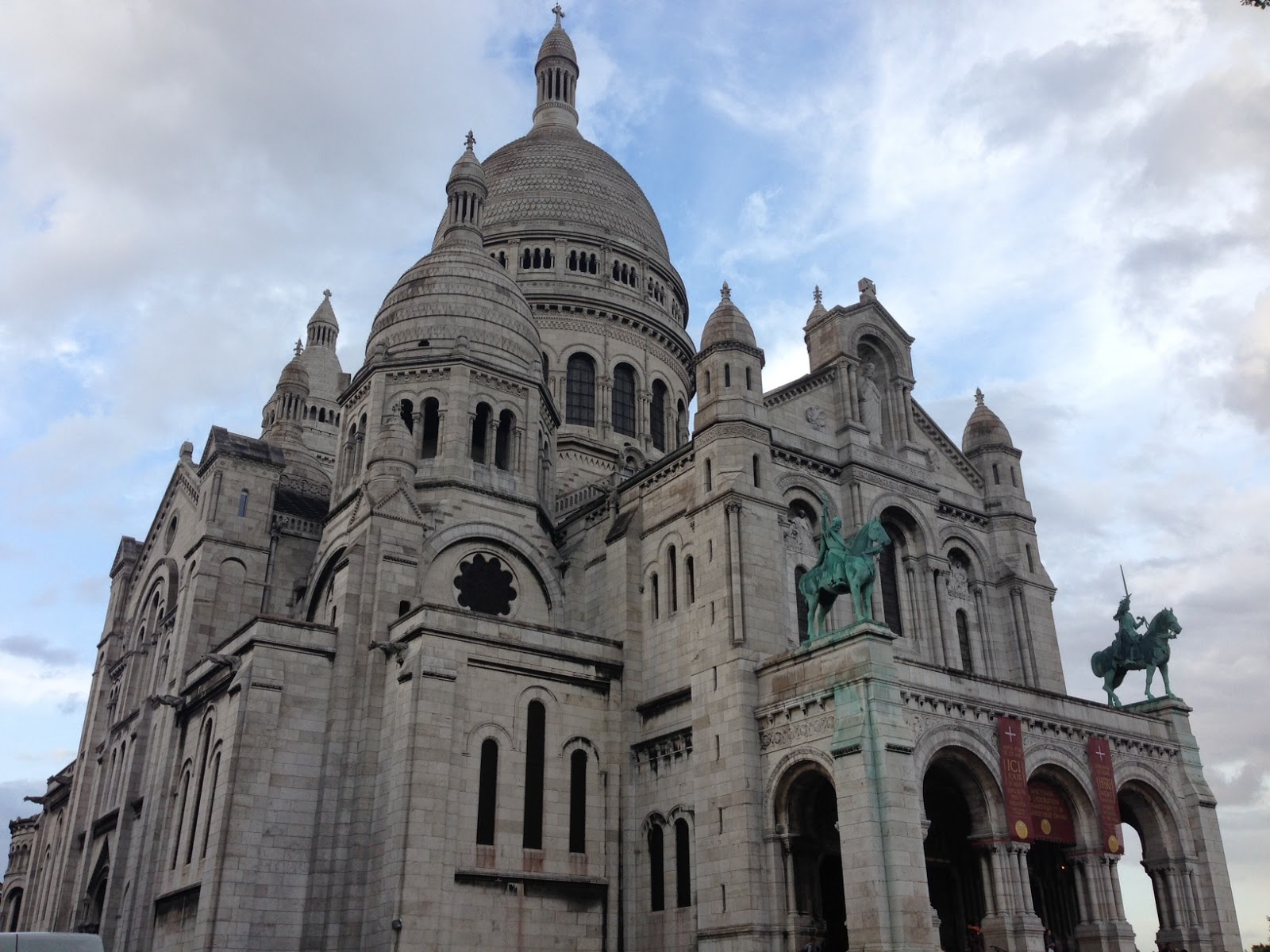 The Basilica of the Sacred Heart is located on the summit of the butte Montmartre, and is the highest point in the city. Construction started in 1875 but it wasn’t completed until 1914. You weren’t allowed to take pictures inside; it was of course stunning. I lost count of the number of side chapels, but it was easily eight. The main front altar was of course the most beautiful; I stole this off the internet. It’s poor quality but you’ll get the idea.
And below is what you saw looking back at the city. I was bummed that the Eiffel Tower was to the right of those trees and completely hidden by them. 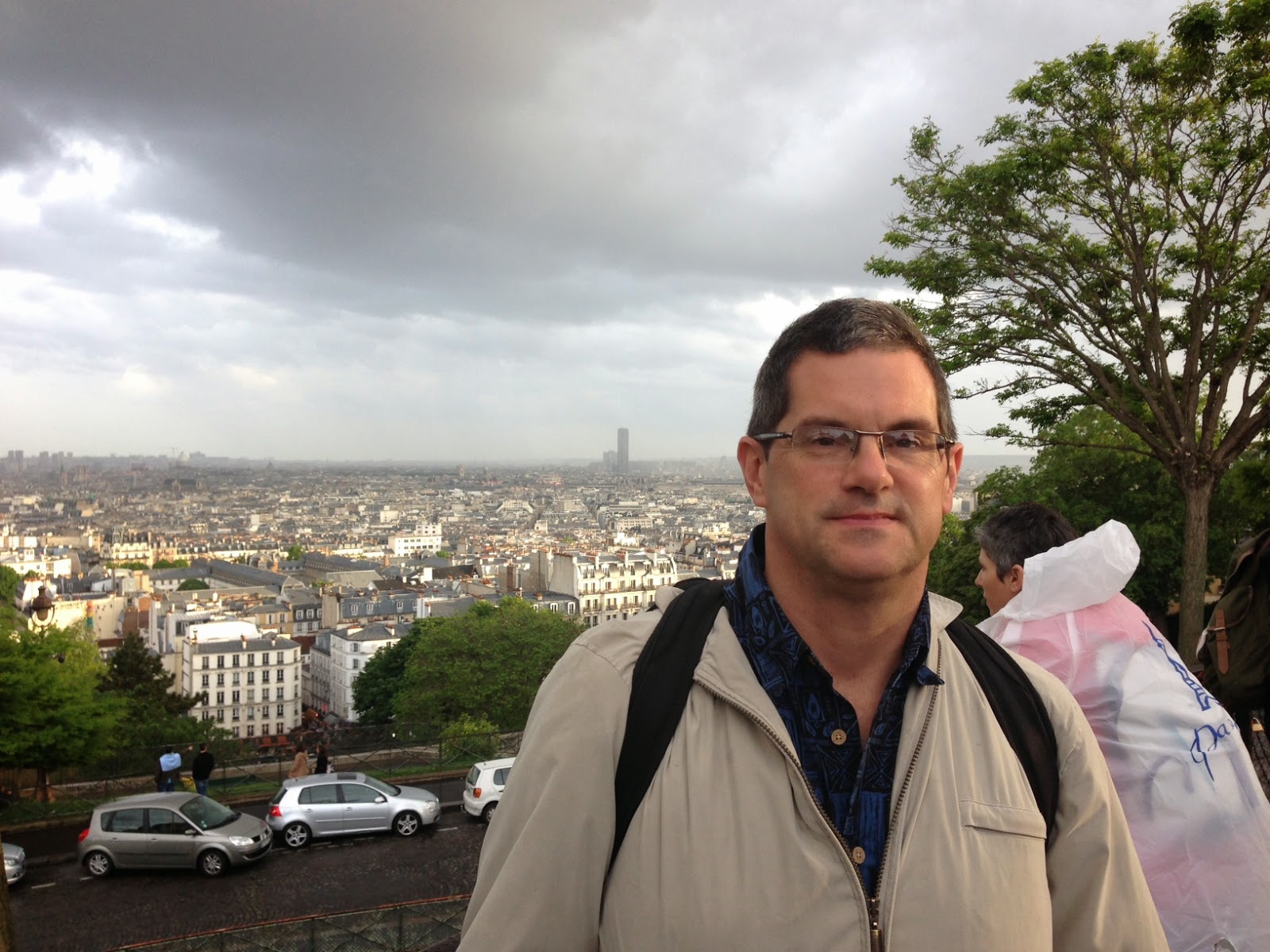 We took the metro back to the apartment. Funny: when we first got on the metro this morning, we’d commented how smart they were designed, because there was a little map above with all the stops, lit (or not) in such a way where you could tell immediately if you were on the right train. I believe NYC is similar. Dan said “we’ll have to make sure we do that each time.” So we did. And – Oops! Quickly figured out we were going in the wrong direction. The train didn’t stop long and was already moving so we had to wait a stop and turn around and go back. Dan realized he had read the Google instructions backwards (easiest way to explain that) and that’s what got us turned around. It didn’t take much time at all to get back on track. We were back at the apartment by about 9pm.
It was a full day. Didn’t “do” much but we felt like we saw A Lot. I also lost count of the number of times one of us said “I can’t believe we’re here.”
Tomorrow is Normandy. It is the thing I’ve been looking the most forward to.