Ya didn’t know it was a city, did ya? It isn’t – despite what all the street signs say – that’s apparently just how London refers to its boroughs. On Thursday we’ll hit the City of London in London. Very confusing. And yes, it’s boroughs with only 2 syllables, just like we say it.

So for our first official full day in London we decided to go classic and hit the iconic stuff. We both went to bed relatively early last night and both slept well. We had a simple breakfast in and made our way to the bus stop around 9:45. We’re taking buses more than subways because you can see more, and because one of our travel cards is not working right in the subways and there isn’t always an attendant to let you in the turnstile manually. So the bus has become easier because you just flash the card at the driver. 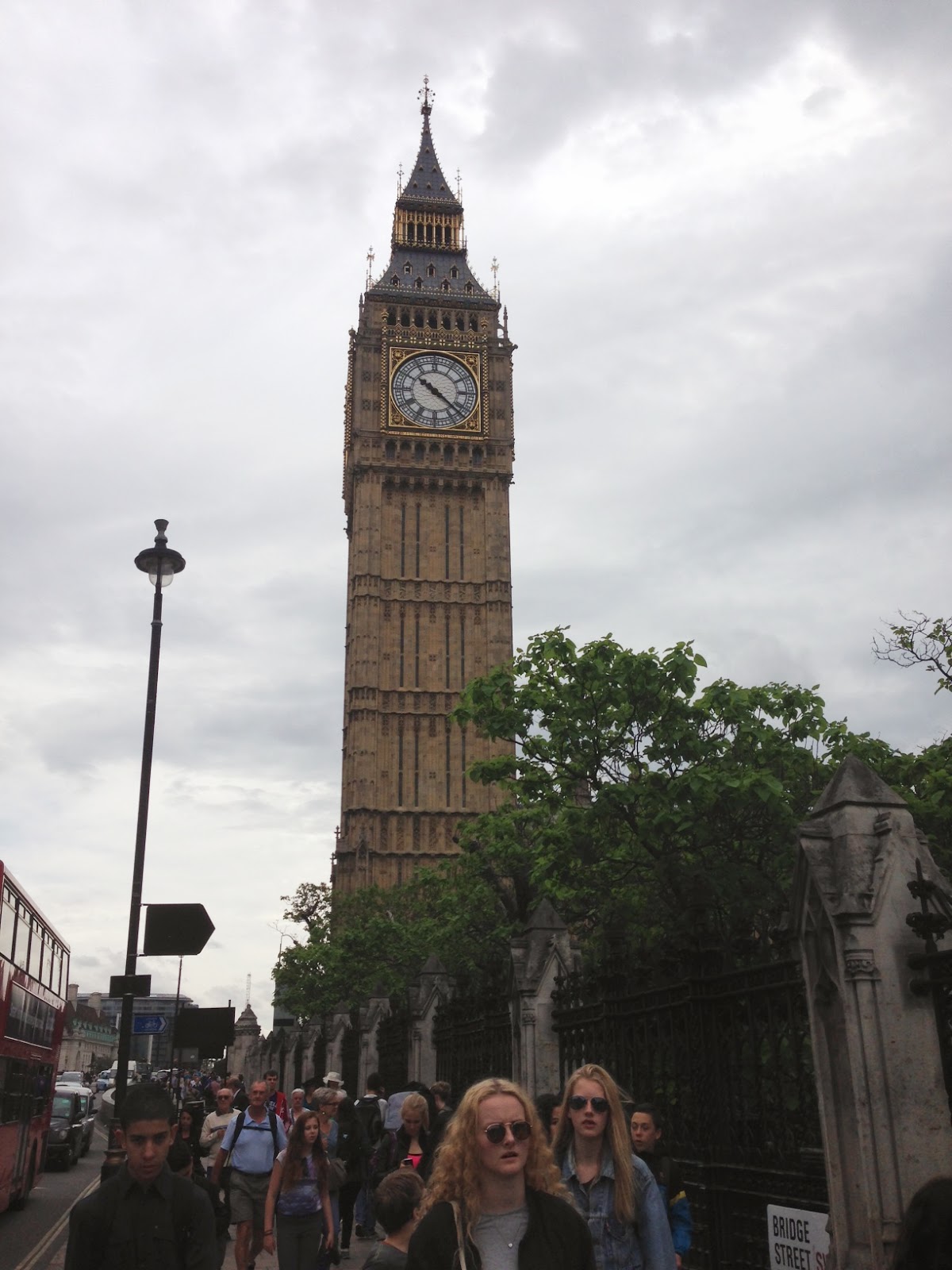 We did not go in here but it seemed fitting to start with a photo of Big Ben since it’s arguably the most iconic building in London, and was the first thing we saw when we got off the bus. “Big Ben” actually refers to the bell inside, not the clock, although the clock is the largest four-faced chiming clock in the world. The tower used to be just the clock tower, now called the Elizabeth Tower, renamed for the Queen’s Jubilee. It sits at one end of the Parliament building where the House of Lords and House of Commons meet. The official name of the building is the Palace of Westminster; it was the residence of Kings & Queens in the Middle Ages. The original and even the 2nd one were both destroyed in fires; this version was built around 1835.

I started reading the Churchill biography “The Last Lion” as a way to continue my study of WWII. It’s quite dense and in 3 volumes, so I’ve put it down at times and read other books in between for variety. I’m just about at the end of Volume 2, which appears to end towards the beginning of WWII. Some of the detail I just skim over but for the most part I’ve been very interested. He was born in 1874 and his father was the Duke of Marlborough; his generation witnessed the passing of English rule by nobility so there is an interesting Downton Abbey sort of thing going on in the background. He was a mix of contradiction on the surface at times, but there was always consistency in his motives: what he thought was best for the British people. Two large examples of that are his switch from the Conservative party to Liberal then back to Conservative. He was not an ideologue – he moved with the party he thought was headed in the right direction. He was also fiercely anti-Communist and loud about it in the 20’s and 30’s, so people’s head spun when the war storm was gathering and he suggested they strike an alliance with Russia. It’s because he was one of the first in Britain to clearly understand what Hitler was and knew that’s where the greater evil lied, and that they couldn’t do it alone.

Several things I learned from the books which were interesting to have as background going into this museum:

The Churchill War Rooms enshrine the bunker that was used to run the war in Europe from September 1939 to August 1945. After the war the lights were turned off and everything was left exactly as it was. It was several years later the the historical significance was understood and steps to preserve and remember it were initiated, yet it wasn’t made an actual museum until Margaret Thatcher opened it in 1984.

We were here for 2 hours and enjoyed it immensely. One of the most moving things was a video of interviews of civilians, some men but mostly women, who worked here during the time as clerks and secretaries. Very intimate insight into

After this we walked along St. James Park. We found a place a couple of blocks from Buckingham Palace and got panini sandwiches to eat on the lawn across from it. This has been the official royal residence since Victoria moved in in 1837. The building has been around since the mid 1700’s. It is not open for tours at this time, but will be later in the summer. 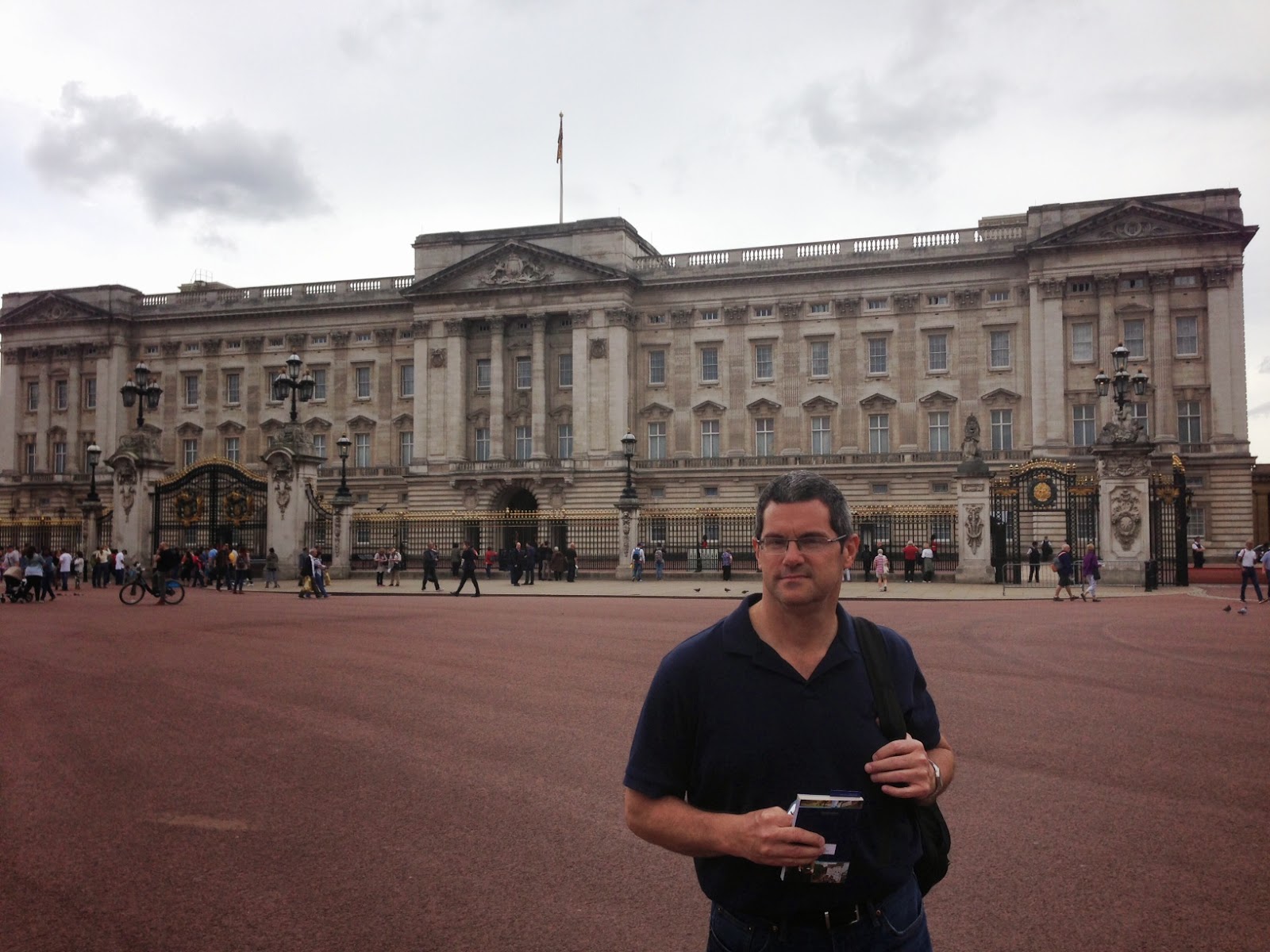 We’d made our way back around to Westminster Abbey by 3pm. As I said in an earlier entry – around our nonplussed reaction to Notre Dame – we’ve seen a lot of European churches and it takes a lot to impress us. This might go to the top of the list. It’s old – much of it around 800 years – beautiful, architecturally interesting, and steeped in more history than any we’ve seen. It’s still a functioning church with regular services, and the site for many royal ceremonies, including the funeral of Princess Diana and the recent-ish wedding of William and Kate. And lots and lots of famous people are buried here, I really had no idea. Lots of names anyone would recognize (Charles Darwin, Isaac Newton, Lord Byron, Alfred Lord Tennyson), many you wouldn’t, and of course lots of royalty. Elaborate tombs of famous royals were the most interesting, including rivals Elizabeth I and Mary Queen of Scots. You can see the full list here.

Photography is not allowed but Dan snuck a few in. 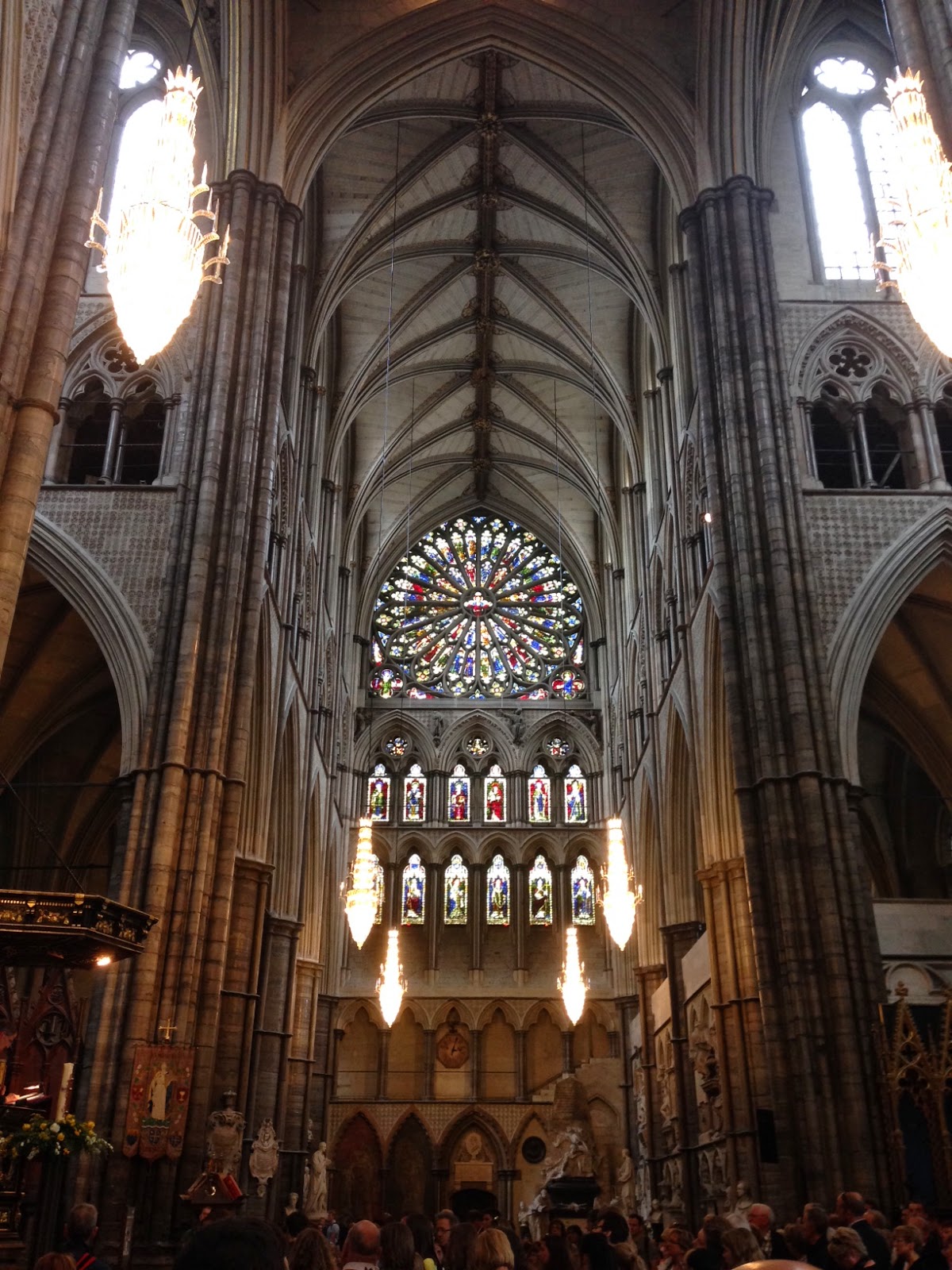 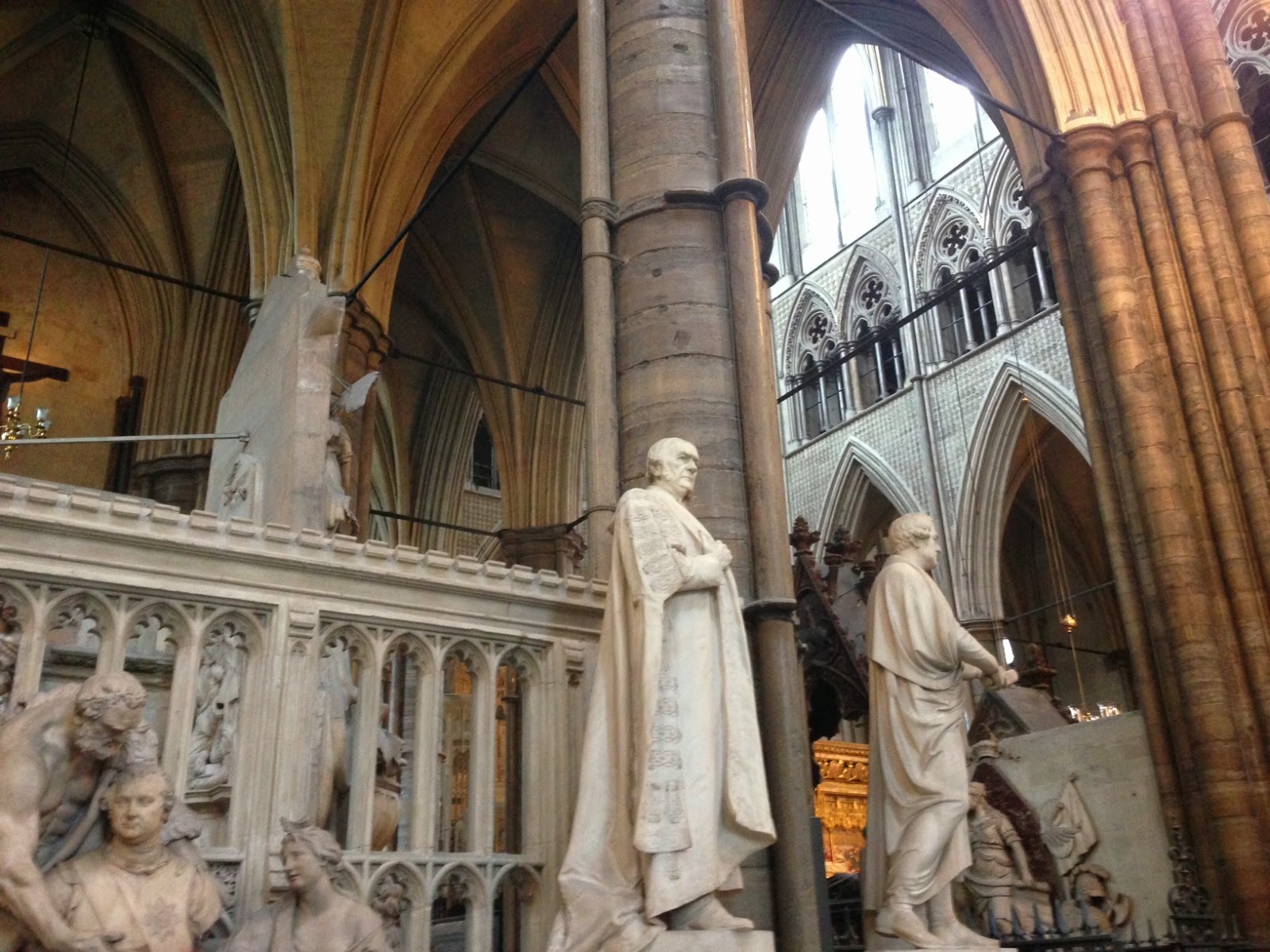 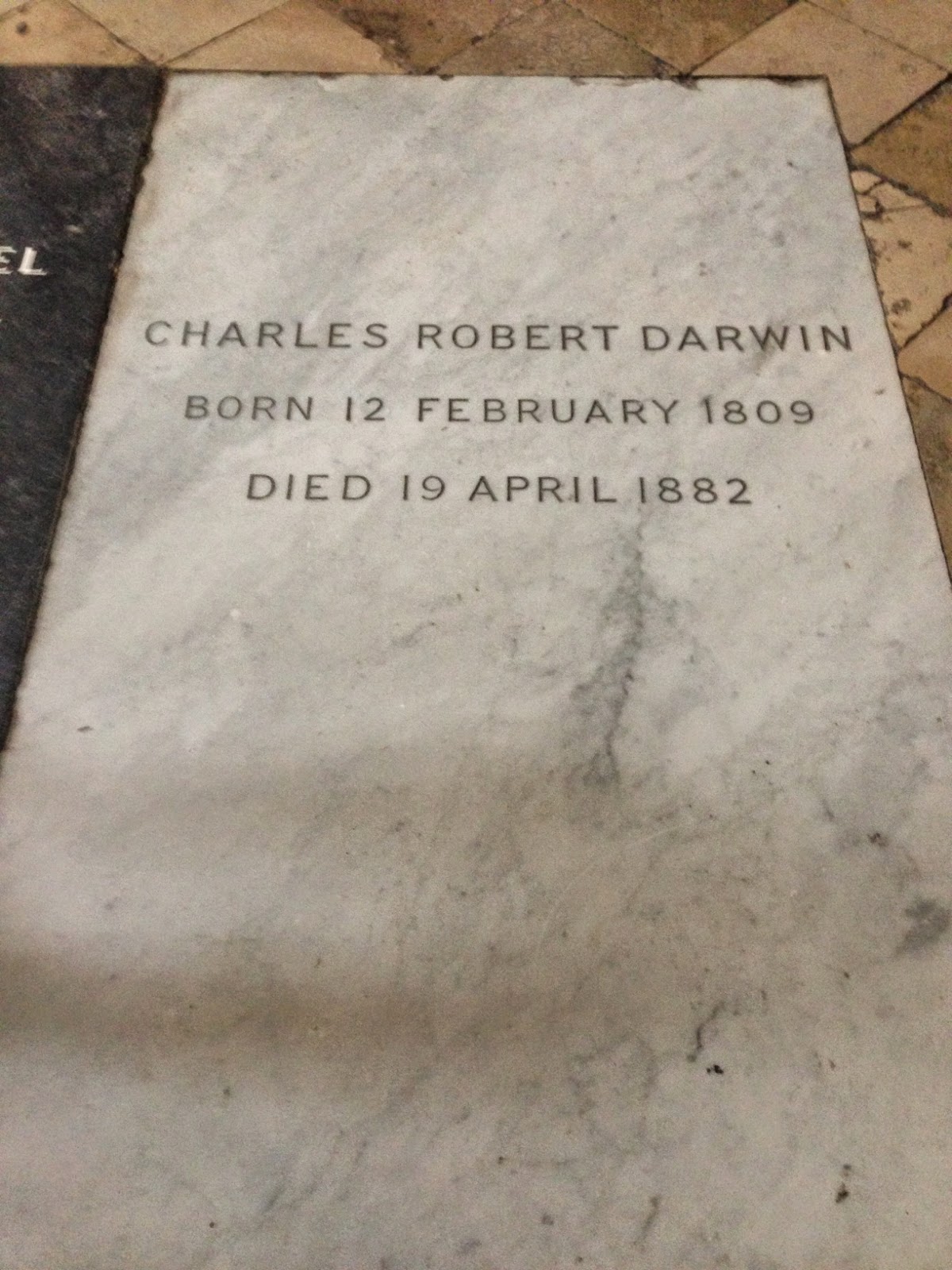 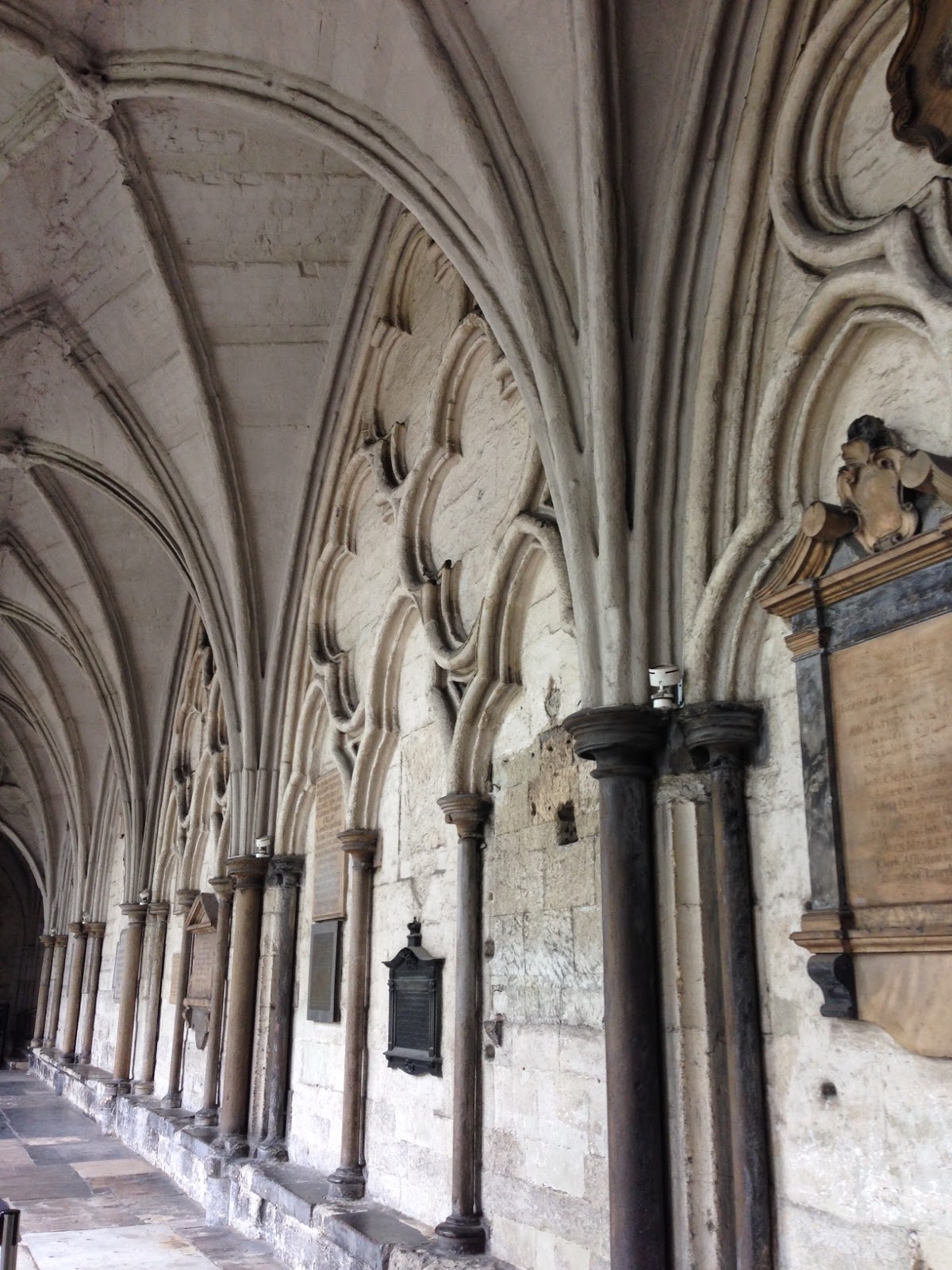 We went back to Lavender Hill and picked up Portugese BBQ for dinner and brought it back to the flat. It was a tremendous amount of food – we each got the special for 8 pounds; leftovers will be used at breakfast the next 3 mornings! We left again around 6:30pm for our first evening in the West End.

I had done a Broadway trip with Jon in 2011 an loved everything about that trip. In particular, I “got” that seeing something on Broadway has a different feel and quality to it unless you happen to see an original cast tour. So I didn’t want to miss the opportunity to be this close to London theater and not take advantage of it. When I looked around for what was playing, I decided I couldn’t miss the chance to see a Noel Coward play with Angela Lansbury in the John Gielgud theater – all big names for theater people. The play was Blithe Spirit, an “improbable farce” with Lansbury playing a medium who brings back the dead first wife of a man in the home he shares with his current wife. It was very entertaining and wonderful to see 88 year old Lansbury in person and still working and doing very well. When she first came on stage the theater erupted in applause. At the intermission Dan commented he thought that was strange – why did they do that? I just said “because it’s Angela Lansbury.” He’s not as into that stuff as I am so the experience was a little lost on him. But he enjoyed it more than he thought he would and I was thrilled to be there. 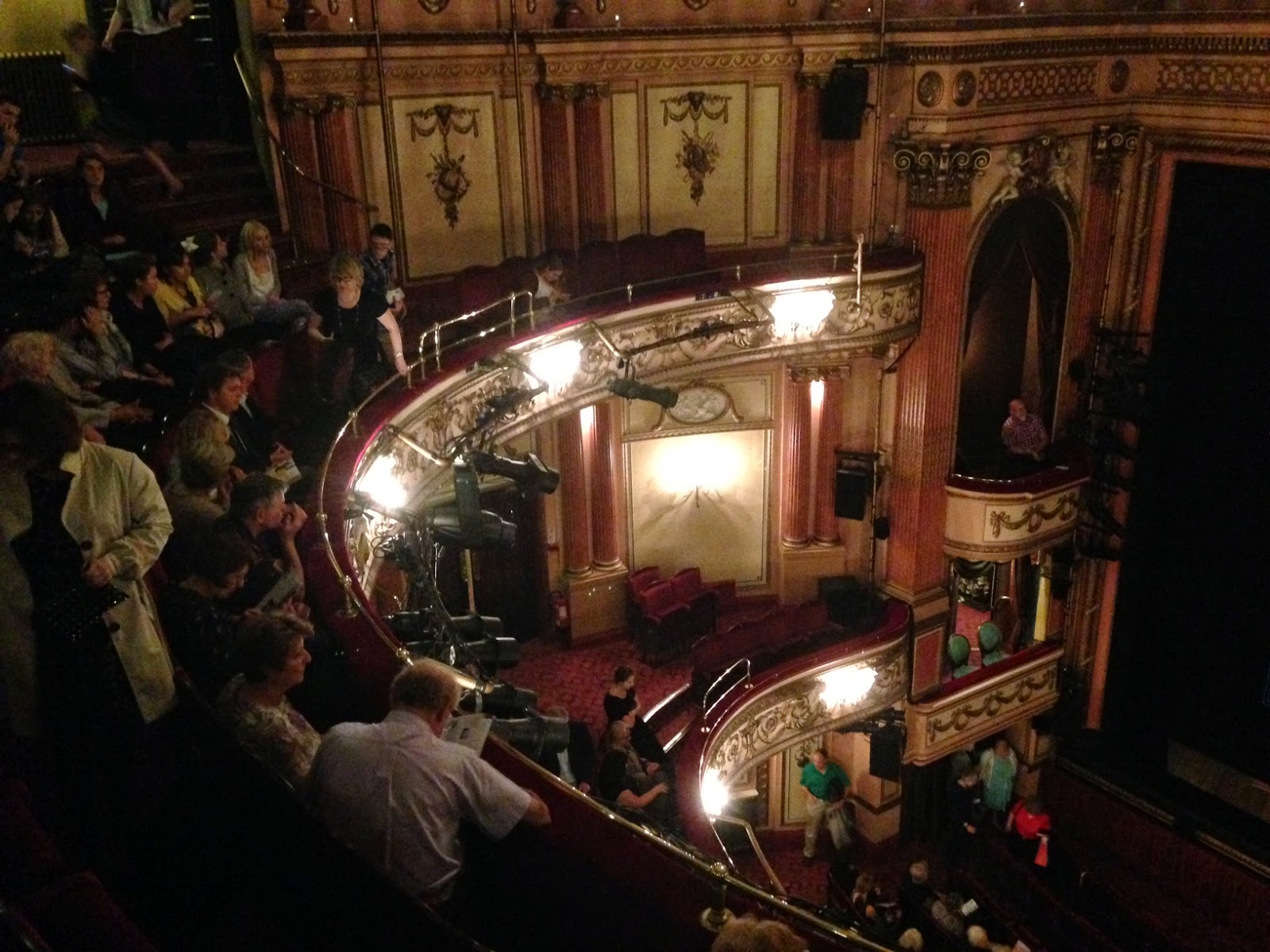 We made our way home by bus and were back by about 10:30pm. It was a great first day in London.

Side note to Meher – re: the separate hot/cold faucets, the only one I had noticed before you asked was in the Edinburgh flat – the bathroom and kitchen sinks were like that and I thought it was odd only because the flat was so updated otherwise. The flat we’re in now isn’t like that, although it took me probably longer than it should have to figure out that in the kitchen the hot water was on the left, not the right. I just figured it was backwards like the roads 🙂 Most of the public spaces we’ve used are automatic single. Of course, tonight at the theater I noticed it – probably because you pointed it out! – but it didn’t really seem weird since we were in one of the older theaters in the West End. Now it’ll be on the brain and I will notice it more.
In the mean time, I found this.

And while we’re here: on the bus trip back from the castle to Edinburgh, the driver, Barney, entertained all kinds of questions and was quite good at answering a wide range of things. Dan asked about the driving thing and he said he didn’t know for sure, but it make sense to him that it had to do with riding horses – most people were right handed and you needed to be on the left side to joust and defend yourself with your right! It almost sounded like something he made up on the spot but he was quite satisfied with his answer. Here are some other thoughts on the topic, some which agree with him.