Not too much to write about, just glad to have gotten here safe and sound. I left Davis Saturday afternoon and dropped the car off in front of a friend’s house in Burlingame. Arranged for a cab to take me to the San Francisco airport from there. It’s close, there wasn’t much traffic and not much of a line in security: it took only 20 minutes to get from the Burlingame house to my gate. Good way to start!

My flight was delayed a little but finally left around 7:30pm. It was almost 10 hours in the plane. I read and played games on my Kindle and watched 3 in flight movies (The Imitation Game, Gone Girl, American Sniper.) The time passed relatively quickly. I slept less than 1.5 hours. I deplaned in London around 1:30pm local time and, having to go through customs and security again (Heathrow is a joy in this way….not….) it took every bit of the 1.5 hour layover I had to get to my gate.

The flight to Dusseldorf was also a little late, but I was greeted with a nice surprise at the end: Dan took the train from Cologne to meet me at the airport. What a guy! I was so not expecting to see him I barely recognized him as I was making my way through the exit to find the trains. It’s only about a 45 minute train ride to Cologne but we had to wait a bit for the next one.

I think it’s fitting that the first official picture of the trip be the same as it was last year: the square outside of the Cologne train station and in front of the cathedral. There were street performers doing acrobatic/gymnastic things to congas at the bottom of the steps, so in the shot below you see all the people on the steps being entertained. 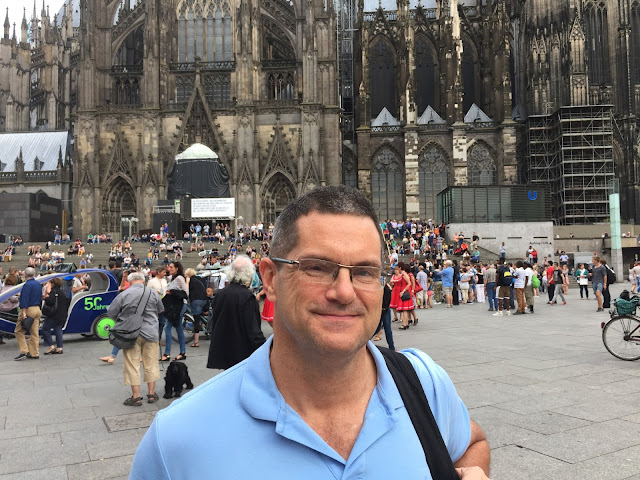 We are staying at the Hilton and it’s just a couple of blocks away. We dropped off my bags and started meandering in search of dinner. This is our 3rd trip in as many years, each starting in Germany because of Dan’s work, and each starting with Italian food the first night. There are a ton of Italian restaurants in Germany and for whatever reason we hardly ever go out for it at home, so make up for it while we’re here.

On our way, we came across this. Couldn’t resist. 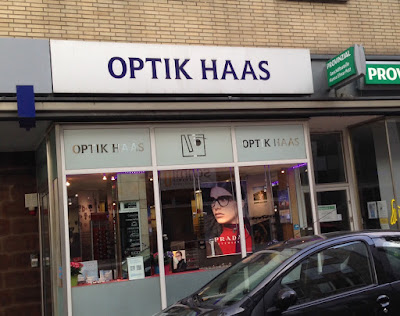 We eventually ended up here. It was a 4.5 on Yelp and was what we usually go for – neighborhood hole-in-the-wall. It was cute on the outside, and we sat at a front corner table – literally behind that sconce and menu on the left. The weather was cool and breezy and it was lovely. 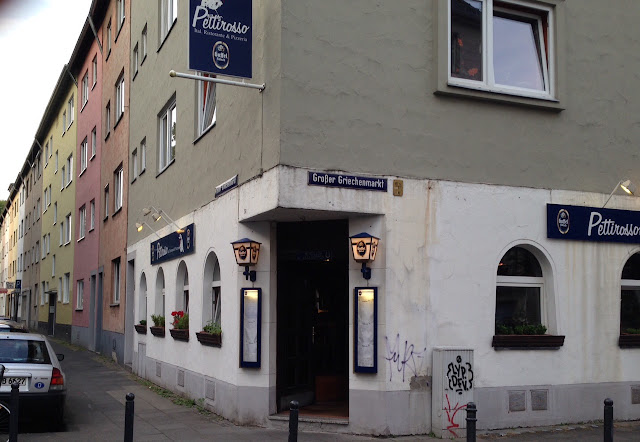 But culturally confusing. It was an Italian restaurant with a menu in German, and a group of women speaking Russian or something like it to our right. We would say “danka” and the waiter would say “grazi”. The food was OK, although we both agreed my dish was better, and Dan didn’t care for his much at all, so we switched halfway through. Mine was a creamy, cheesy mushroom fettuccine thing – can’t go wrong with that. Clean simple flavors done very well I thought. Dan’s I think was more German than Italian – it reminded me of stuff my Granny used to to make. The tomato sauce was definitely not like a marinara or anything else classic Italian – although I’m not sure I can put my finger on the flavor profile. I liked it better than he did so was fine switching.

Y’all get another year of Dan going “are your eyes open?”, which generally results in this expression: 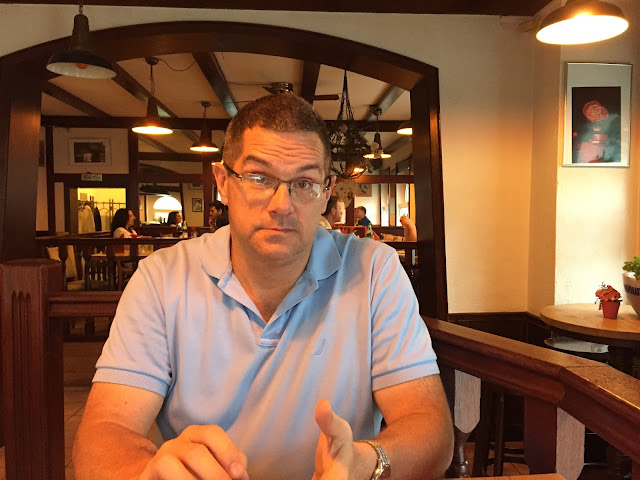 Afterwards we walked through town some more and found a nice little gelato shop on the other side of the cathedral. Yum – something about the gelato here is just “that” much better than at home – extra creamy or something, It’s obvious from the first taste. I stuck to basics: stracciatella and pistachio; Dan got whiskey and banana (!). Let’s just say he didn’t like his as much as I liked mine. “I should’ve gotten strawberry” he says as we were walking back to the hotel. (PS: If you haven’t had stracciatella before, think Eskimo pie. And if you don’t know what that is I can’t help you…)

It is 11:30pm local time, which makes it 2:30pm back home. So I’ve been up close to 35 hours with maybe 2 hours sleep total. Time for bed. Tomorrow the real fun begins!

Last pic: in previous years I’ve talked about how glad I am that I learned to pack light. I outdid myself this year. Dan had to bring a sports coat for a work function so we decided to use that as an excuse to perhaps to go into some nice places for dinner later in the trip. There were places last year in Paris we couldn’t get into because we didn’t have the right clothes. Which, by the way, we’re totally OK with. But we decided to challenge ourselves and bring more variety and still not check baggage. Seems like I’m missing something but you get the idea. That may not be packing light exactly, but it’s a creative use of space I’ll tell ya that. And no worries about “will my bags make it?” I think we’re ready!