We really enjoyed our time in Barcelona. And, 3 days was enough. We were ready to go. We loved the scenery and really loved the food, and the history was pretty interesting. But it was hot, humid, loud, and had a frenetic party kind of vibe that just wasn’t us. And I swear they smoke more than the Germans 🙂 But I can see why lots of people like it.

So when morning came we were happy to move on. We were out of the apartment by 7:45 for a 10:15 direct flight to Helsinki. We took the airport bus there – the same one that dropped us on Thursday – hung out in the lounge for a bit. By the time we got to the gate they were almost done boarding. We had a lovely, uneventful 4 hour flight, landing in Helsinki at 3:15 local time. 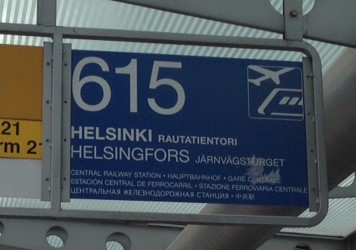 We took a bus from the airport. I don’t think I’ve seen so many languages used on one sign before: Finnish, Swedish, English, German, French, Spanish, Italian, Russian, Japanese. Dan was surprised to see so many Asians in the airport. Turns out his guess was right: Helsinki is used as a major transfer hub. As the crow flies over the Arctic Circle, it’s one of the most direct routes there is to Tokyo. 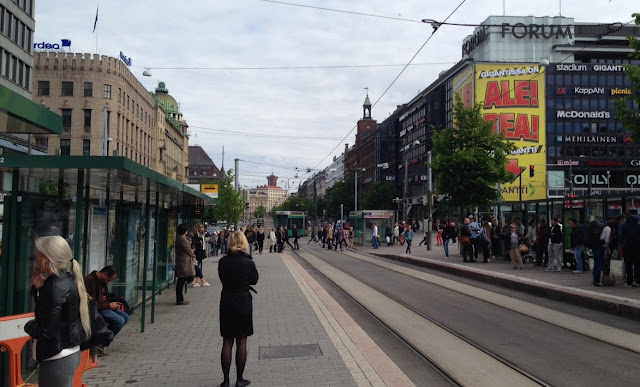 Just outside of the central station where we picked up our tram (streetcar). 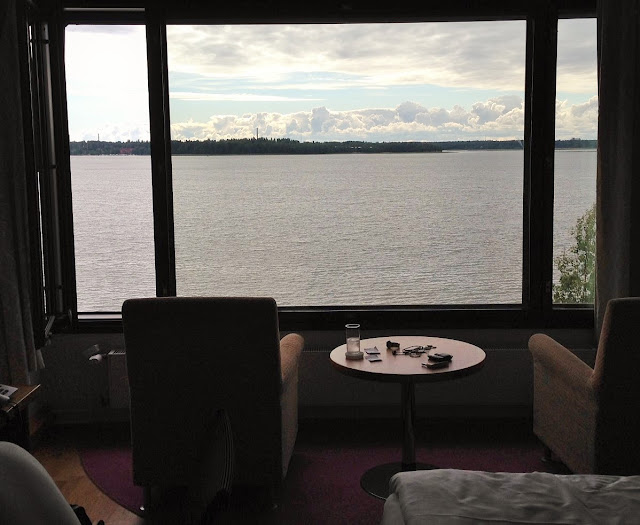 It took us about 20 minutes to get to the Hilton we’re staying it from the center of town. It’s a nice place on the water. a lake of sorts we can’t pronounce!, which eventually leads to the Gulf of Finland, which flows into the Baltic Sea. Here are a couple of shots from our room. 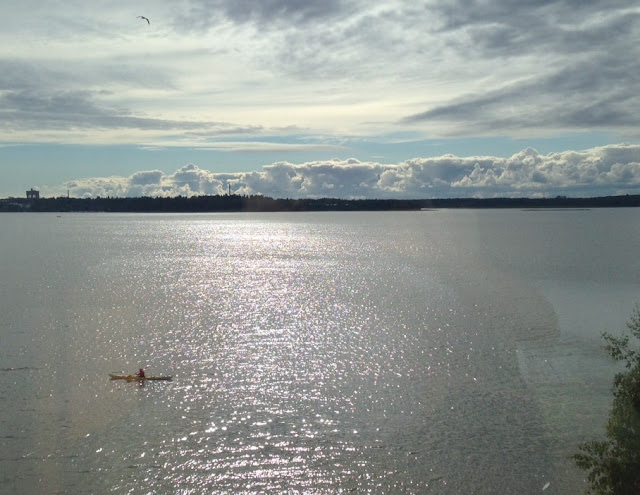 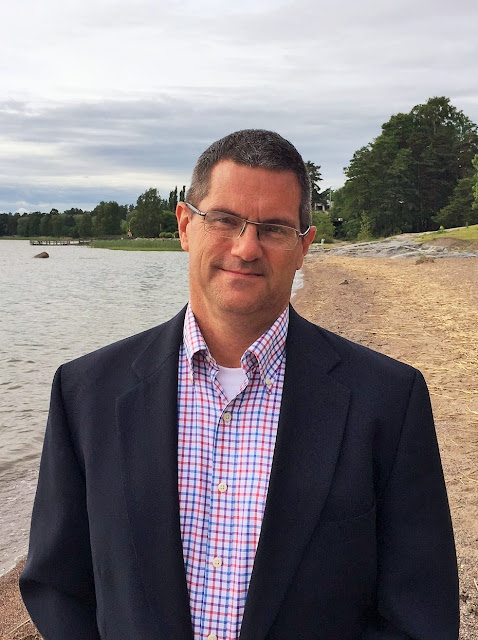 There’s a little beach area we went walking around before we headed into town for dinner.
Here are a few pictures from us walking around to decide where we were going to eat. Looks like a nice little town, and much less hustle and bustle than Barcelona. Works for us! It’s not exactly a small town though: 1.4 million people in the metro area, about the same size of Cologne. (Barcelona was 4.5 million, so quite a bit smaller in comparison…) 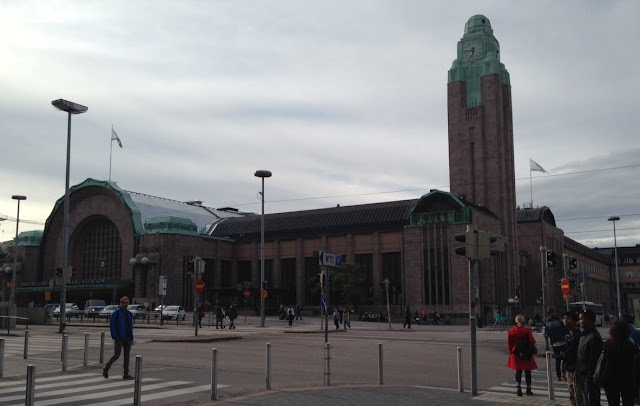 When we came upon this we were like “hey, this looks familiar!” It’s the front of the central train station where the airport bus dropped us off. 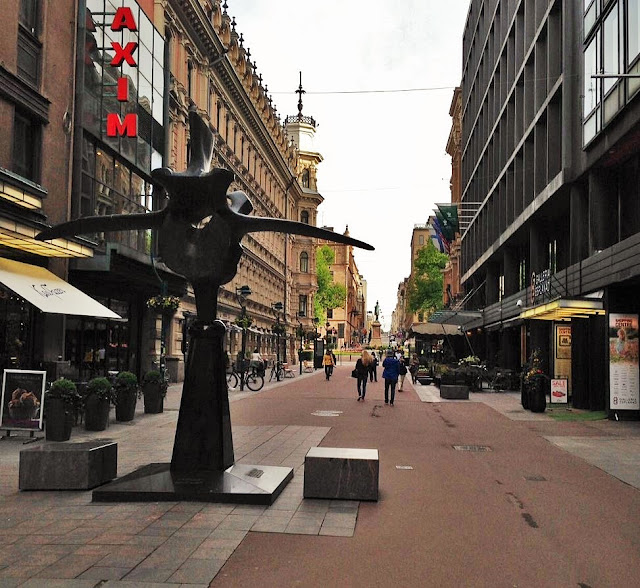 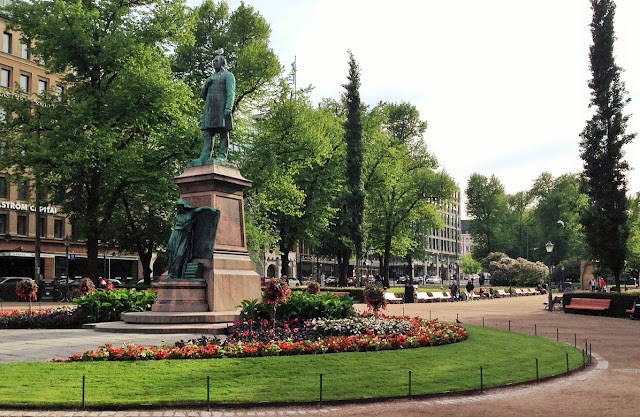 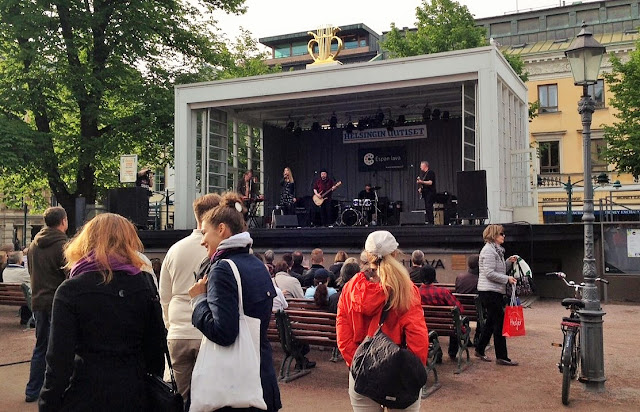 Just a little park where some live music was playing. 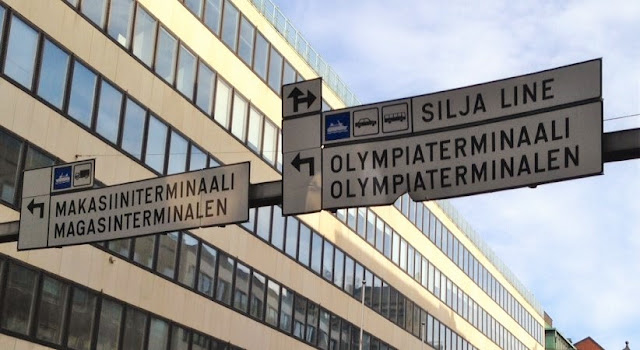 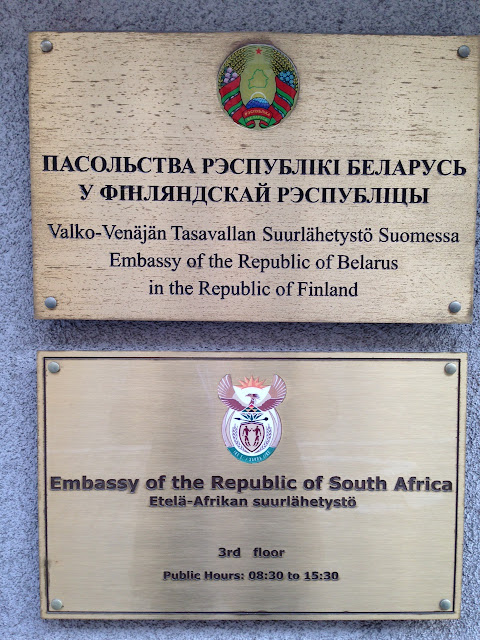 These were the 2nd and 3rd embassies we randomly came across. The first one was Rhodesia (or Indonesia?) right by our hotel. 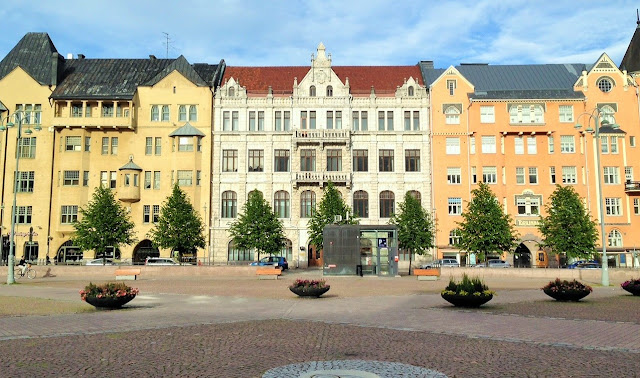 A pretty little square. Most of the buildings in Helsinki are in the beige/yellow/orange sort of family it seems. Our restaurant is bottom left. 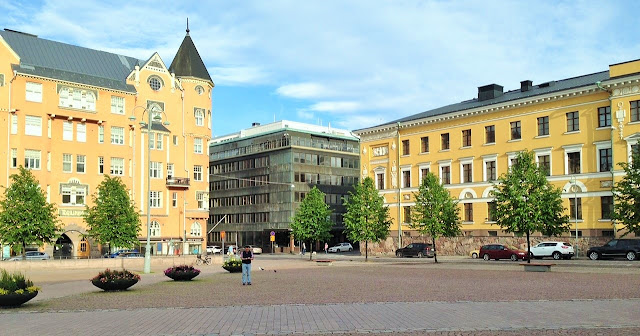 And a pretty empty square at that, except for Dan all by himself in the middle fiddling with his phone. 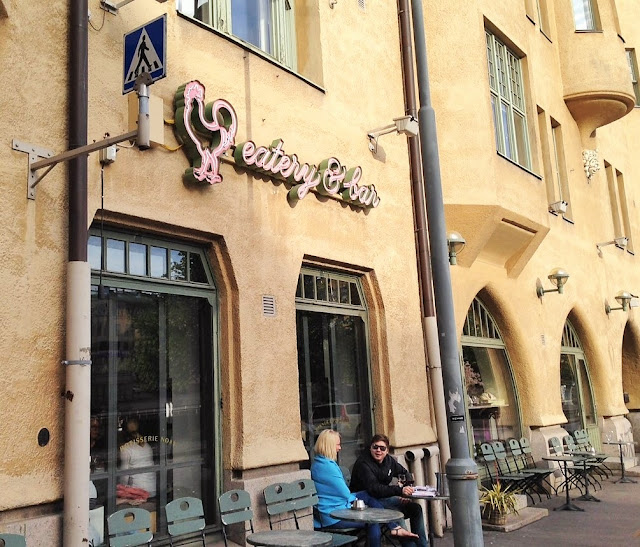 The menu looked fun (dinner and ping pong!), and it was full of locals, not another tourist in sight. We were in. The name? Cock. Seriously. 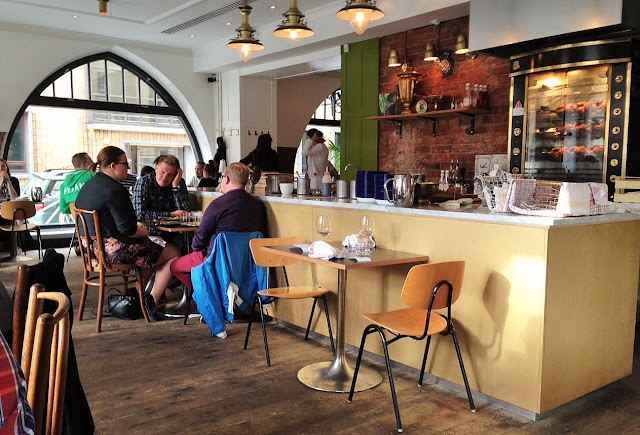 It was cute though! Very lively, played great American music. 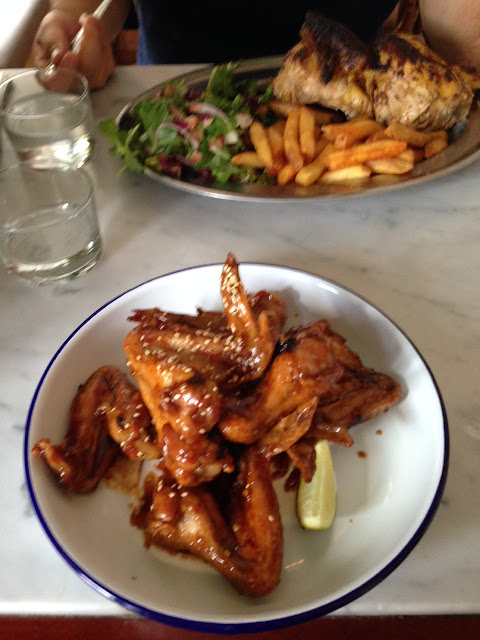 Now it claimed to be a French restaurant, but our appetizer was Italian – arancini – Dan got the jerk chicken and my “cock wings” had a definite Asian flavor to them – soy sauce and sesame seed. Everything was cooked perfectly, we enjoyed every bite.
Only one other capitol city is further north than Helsinki, and that’s Reykjavik, Iceland. We have never been this far north or east before, with a 10 hour time difference between us and home. (Dan has been to Korea so he’s been further away time zone wise – but that was west, and just about 200 miles farther than this.)
Anyway, that north thing is interesting this time of year – summer equinox and all that. And we’re fascinated by the lack of night. It’s now 12:30am and it is not completely dark yet. We’re told it ain’t gonna happen. So I guess we’ll find out. Here are some pretty pictures though of a lovely sunset from our room. 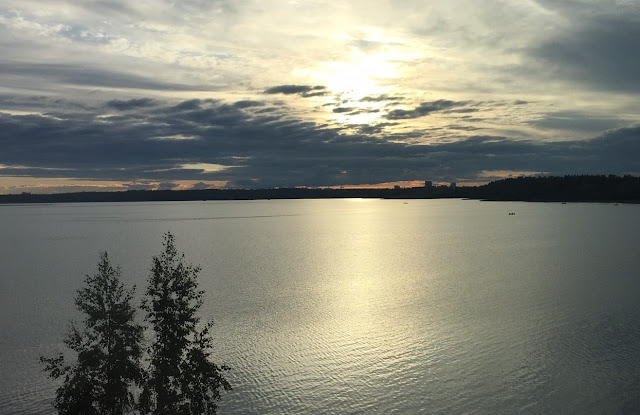 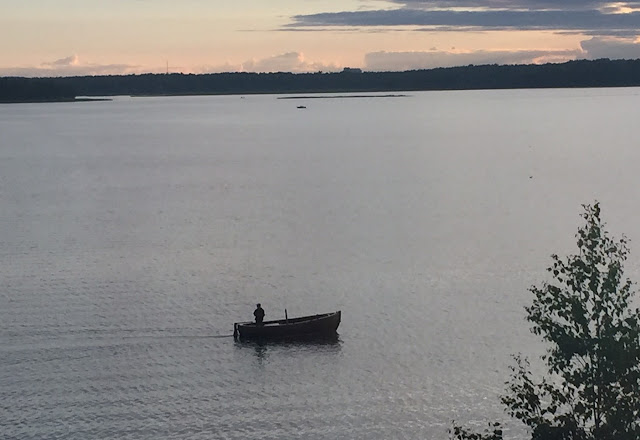 9:30pm.
Finland is the land of saunas, and our hotel has a nice setup for that, so we took advantage of that after we got back to our rooms. They’re only open from 6am – 10am and 5pm – 10pm so may have to go back down in the morning, especially since breakfast isn’t open until 7am. 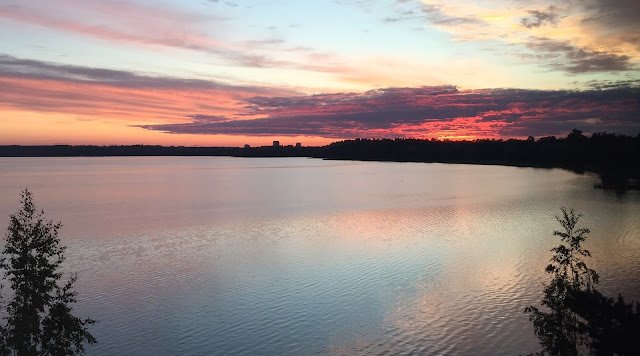 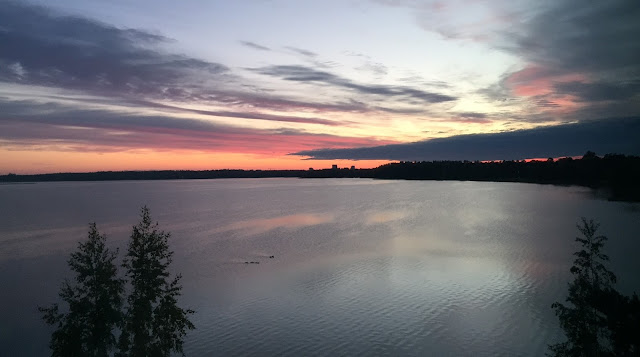 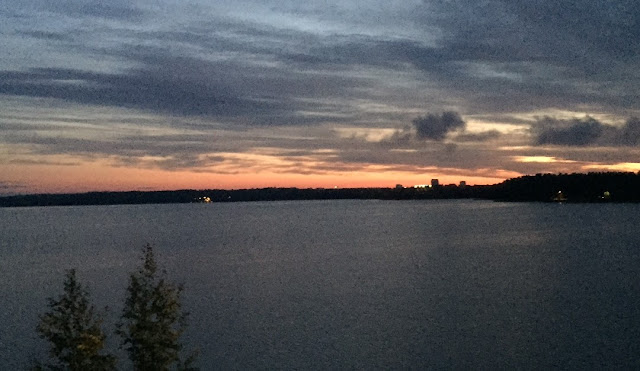 12:45am
We are looking forward to our day tomorrow!

0 thoughts on “Day 8: Barcelona to Helsinki”