I slept a pretty good 7 hours; Dan only about 5; we were both up before 7am. We went down for breakfast in the hotel about 8 and he was off to work by 8:30am. I literally had no plans for the morning, other than to stop by a bank for cash which was my big agenda item for the day. Beyond that, meet Dan at the Dusseldorf airport, taking no later than the 1:30pm train. So a few hours to kill. What to do?

I looked through TripAdvisor for ideas. This is my 3rd time in Cologne and have already done what was important to me. As I continued to scroll through the list, something surprising caught my eye: Sukon Thai Massage. For much of yesterday during the stalled train episode I kept thinking “what I could really use is a massage.” And there it was in TripAdvisor’s top 25 with rave reviews, including great prices. I mapped it and it was just a block or two on the other side of the cathedral. That was the only thing I had definitely decided on: to drop in on the cathedral, just on principle, and then walk around and go deeper into some neighborhoods, out of the touristy area. The massage place didn’t open until 11am so I would still have plenty of time to do both if they weren’t already booked.

It had rained some last night and was supposed to continue through mid-morning so I took an umbrella just in case. But it was warm enough to not need a jacket. I walked the 3 blocks or so to the cathedral. It was just 9am and it was still pretty quiet out. 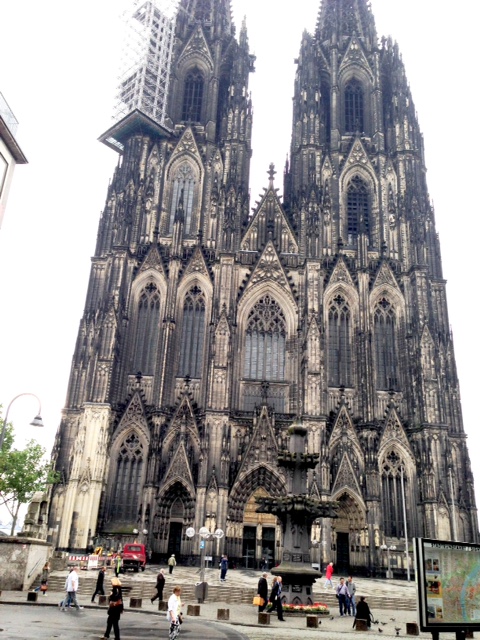 It still takes my breath away every time. Maybe it’s just because it was the first major cathedral I saw in Europe, but this one will always be special to me. I was glad there weren’t many people about; it’s usually a zoo out front. I went in and there was a mass going on in the front side altar, behind a gate to keep the tourists out. And there weren’t too many of us roaming around either. I just sat for a few minutes and took it all in. It’s still miraculous to me that it’s still standing when I think of all the damage that occurred all around it during WW2 – especially with the train bridge maybe 500 yards away being totally destroyed as a significant strategic target of the Allies. The ground must have been shaking all around and these arches and pillars are still standing – the foundation is nearly 800 years old. One of the things that struck me this time in comparison to other churches I’ve been in since is the size of the pillars. It was too dark to get good pictures, but they are massive – maybe 12 feet or more in diameter. Maybe that has something to do with it. At any rate, I hadn’t paid homage yet on this trip so was glad I stopped by. This place does something to me.
Sure enough, the massage place was just a couple of blocks away. The sign on the door confirmed it didn’t open until 11am, so I look a right and spent the next hour playing “let’s turn here and see what happens.” That’s one of my favorite things to do when I’m traveling – just meander and try to get a feel for local life. You have to get far enough away from the tourist area, and/or one or two blocks off the main drag. Since we tie these annual trips to Dan’s work, Cologne is the likely starting place each time, so I wanted to get to know the neighborhoods better. I found myself back at Neumarkt where we had been Sunday evening, but approached it from a completely different direction and was happy I recognized as I came up to it. I stopped at a bank in that area, then went and found some new paths to work my way back to hotel. 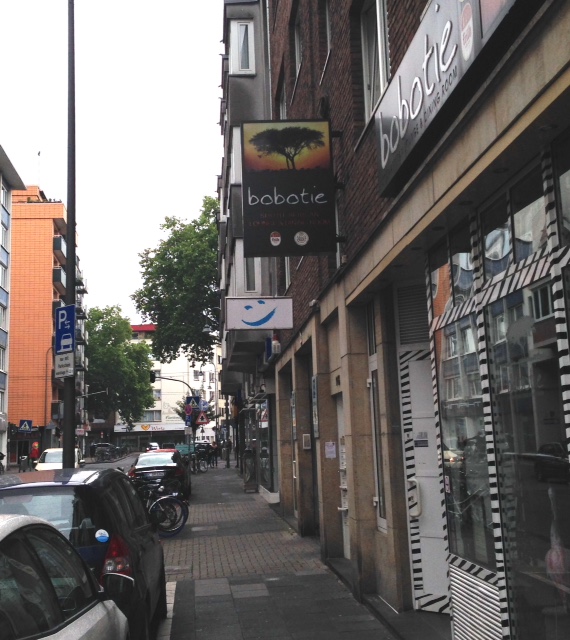 You can’t read the sign in this picture, but it’s a South African restaurant. We’ll have to try it when we’re here next year! 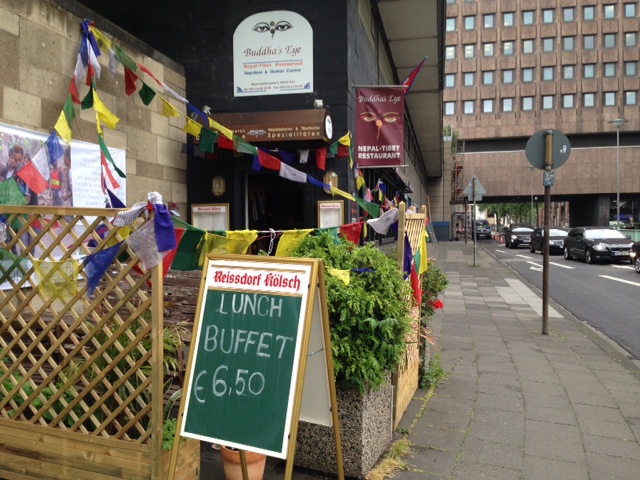 Another place that looked interesting – Buddha’e Eye, Nepalese & Tibetan food.
It was about 10:20 by this point; I decided I would just pack and take my bags with me to the massage place, then go to the train station from there. Simpler than all the back and forth.
The massage was actually pretty good: typical Thai, done on the floor, very little oil used, it’s mostly about pressure and stretching, which was exactly what I needed. They could only accommodate an hour which worked perfectly for my schedule, and it was only €45, a very decent price as this stuff goes. As I made my way back to the train station, I decided to snap a shot of it, still our favorite one! 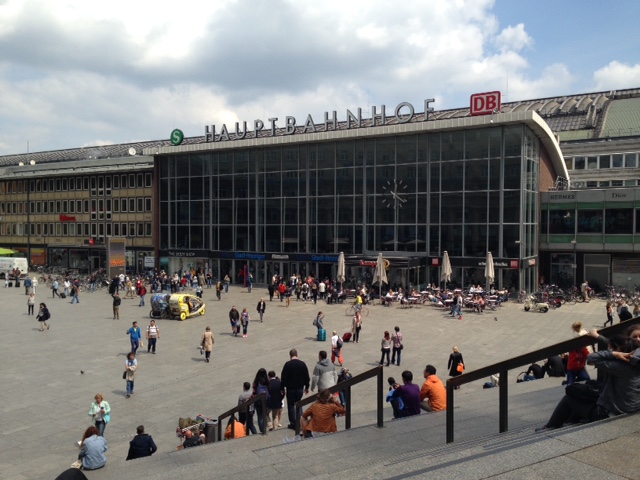 I stopped for some coffee at Kamp’s, right behind that 2nd umbrella – another activity that’s becoming ritual. 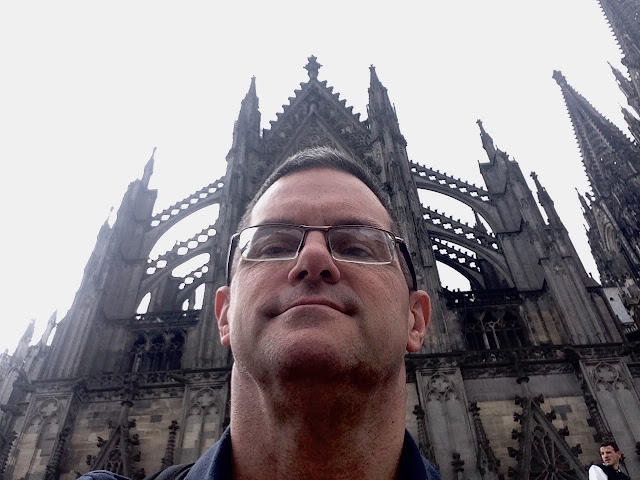 I wanted to see if I could recreate the shot I took last year sitting on the steps of the cathedral, where everyone said it looked like I had a crown on my head. Apparently it’s easier to do by accident!, but this is pretty close. 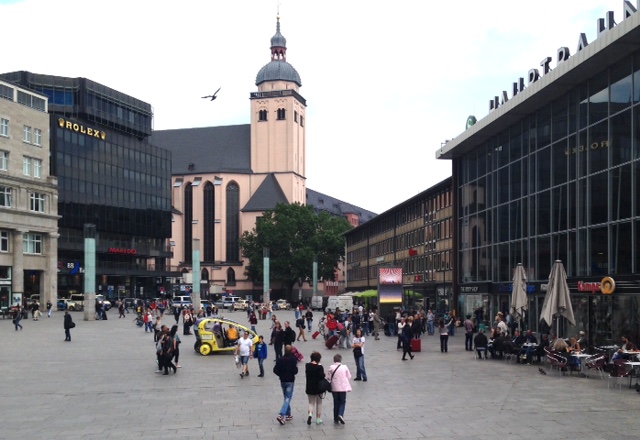 This is the view from that spot.
No train problems today, everything was on time. Security at Dusseldorf airport was surpisingly lax; I never even had to show my passport. You can’t get 10 feet in Heathrow it seems without whipping out your passport again. I kept waiting to be asked for it but nothing. Weird.
I met Dan at the lounge, which he has access to because of his frequent flyer status. It’s free nibblies for lunch so can’t beat that. It was about a 2 hour flight to Barcelona and there were no problems.
We took the airport express bus, and the last stop happened to be a couple of blocks from the apartment we rented. At first when we were on the bus I was saying to Dan how I expected this to look very different somehow, but so far it was all looking pretty normal. He said – maybe it changes the closer you get to the center. By the time we got there I was like: this is like Paris, but warmer. It has that kind of feel to me – very lively, very cosmopolitan, but fun and hip somehow. And all of the buildings seem to be that same 5-7 stories high with wrought iron balconies on every apartment – like Paris. I like the feel of it so far, a lot.
Anna, the landlord, met us there. She lives upstairs, and manages a couple of units for the owner who lives in Ecuador. She was delightful, and very helpful. She’s lived in Barcelona all her life except for a few years she lived in London and Paris. Her English is great just with a heavy Spanish accent. Dan quizzed her about places to eat: authentic Spanish and/or Catalonian food, preferably that don’t cater to tourists. Where do the locals go that tourists don’t know about? She gave us several recommendations, including one just around the corner. 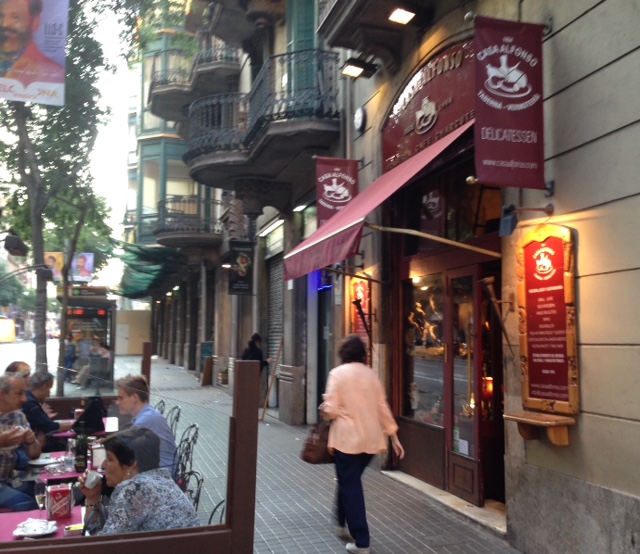 So we had tapas at Casa Alfonso, an appropriate first meal in Barcelona I think. 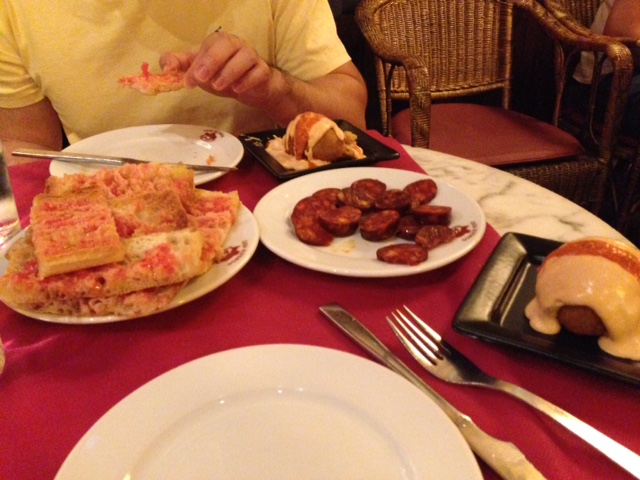 The bread was like bruschetta with a crispy bottom, and olive oil and fresh like pureed tomatoes on top. That’s spicy Iberian chorizo next to it, made almost like a jerky.  On either side of that is the Casa Alfonso Bomb: think croquet – a mash of meat and potatoes, breaded and deep fried, with a spicy mayonaise based sauce on top. Dan really, really liked this one. We also got a cannelloni that was pretty special, and creme brulee for dessert.

After that we stopped by a grocery store a couple of blocks in the other direction and picked up a few things for breakfast while we’re here. 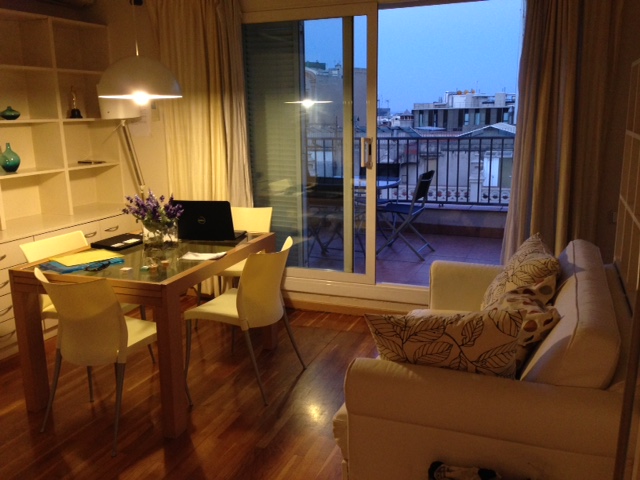 I was pretty excited about this apartment when we found it on AirBnB and it did not disappoint. We loved that is has a terrace, and it’s great weather for it. You see my laptop? That’s where I’m sitting as I type. (Dan’s been asleep over an hour already…) 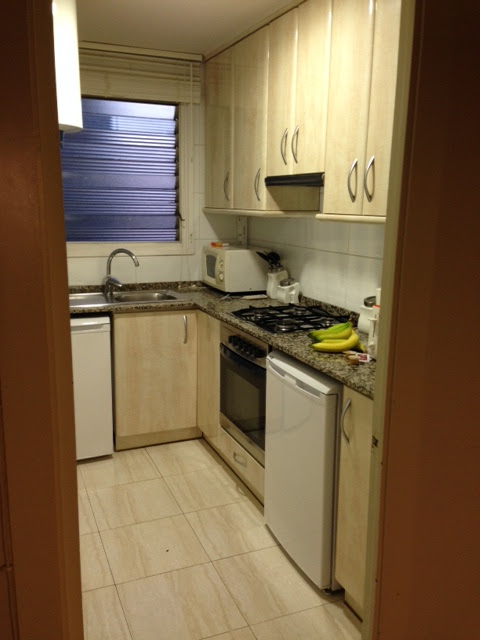 Teeny kitchen but they always are. It’s enough for what we need. We typically only do breakfast in, and buy stuff you don’t actually have to cook. 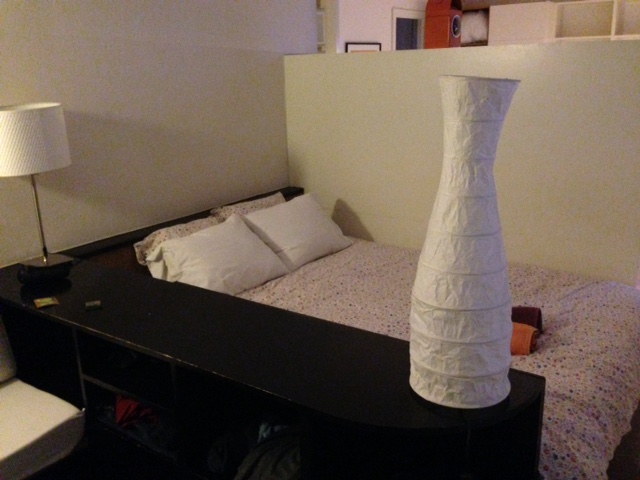 The bedroom is not exactly a separate room but it’s close enough. This apartment had our non-negotiable items: a place for me to be comfortable while writing, a kitchen space, a washer, and wi-fi (which by the way is wicked fast). The terrace was the cherry on top. 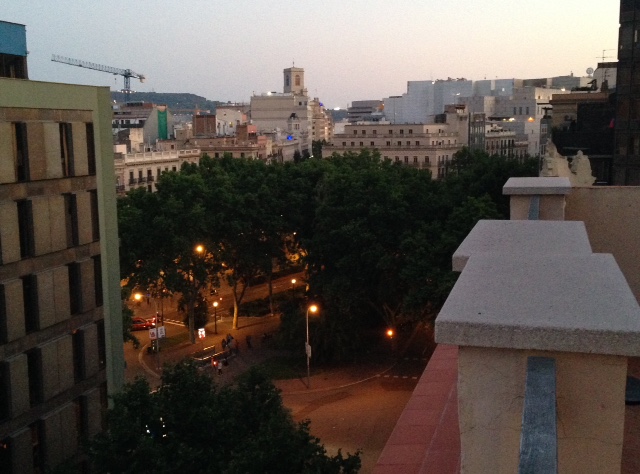 It will be great to have coffee out here in the morning. 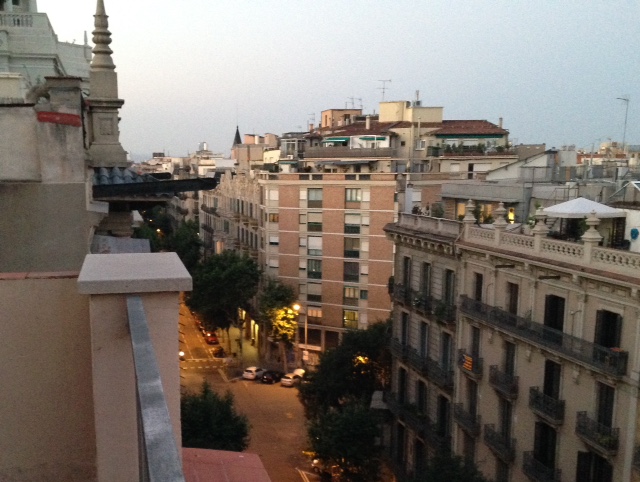 Tomorrow the Barcelona fun begins. And Dan is finally officially on vacation. Excited!

0 thoughts on “Day 4: Cologne to Barcelona”