Barcelona is a Gaudi town, as in Antoni Gaudi, an architect known for something called Catalan Modernism. You see his influence all throughout the city and, unless you’ve studied his work in depth (we didn’t), it’s hard to know which buildings are really him and which are merely influenced by him. And boy does this town love him – as much as Picasso (Part 1) and Miro (from Part 2), probably more.

But because his work was often done for private owners, you can’t really see it all in one place, and certainly not all on one pass. It took me awhile to figure that out. None of the Gaudi stuff is on ANY of the passes; meaning, no discounts for the frugal traveler. If you want to see it all, you’re going to have to pay full price each time. We rarely like anything that much 🙂

The picture below was actually taken last night on our walk home from dinner. It’s Casa Batllo, and is a Gaudi museum of sorts in the form of one of his most famous buildings. When we were finalizing what we were going to do today this morning, we decided to put this last on the list and see how the rest of the day went. It’s maybe 1/2 a mile from our apartment and is open late, so if we were still up for it and thought it would be worth it, we could easily do it at the end. (We didn’t.) 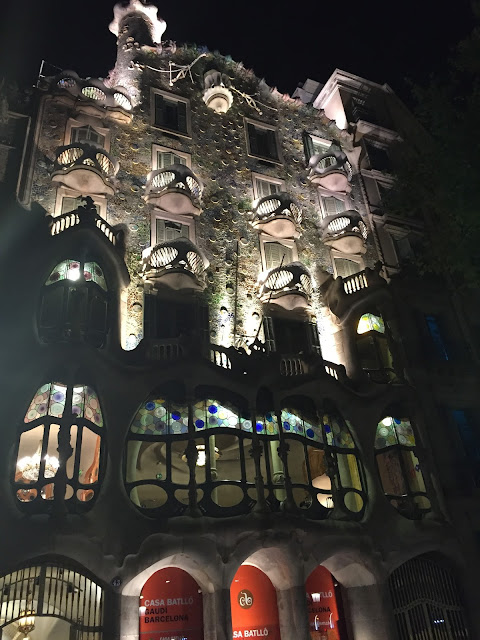 This morning we left around 10:30am and walked over to the Arc de Triomphe, which is just a few blocks away from our apartment. It’s the exact same concept as the one in Paris, just not as big. 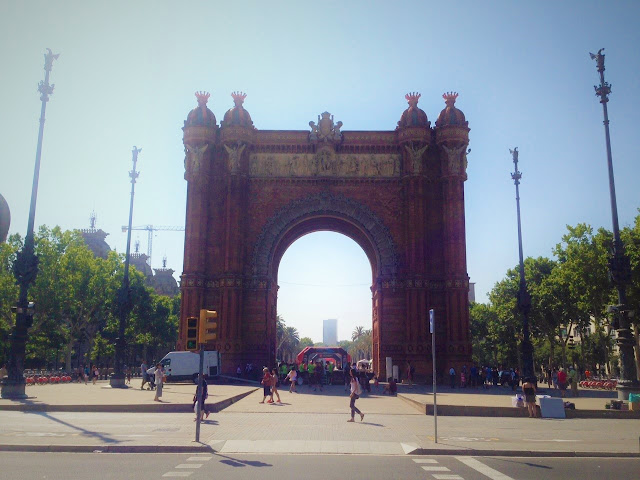 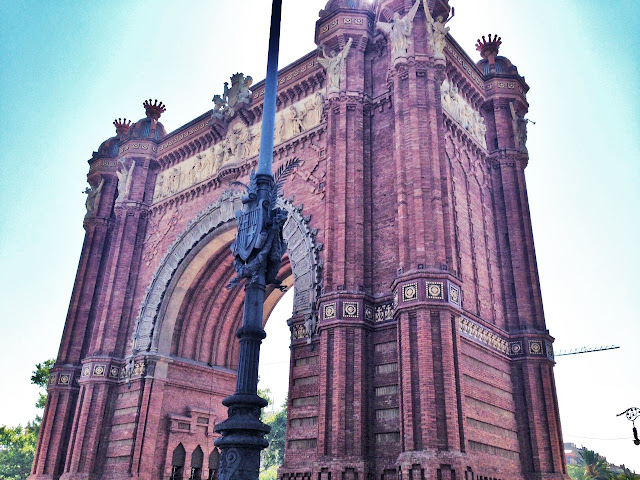 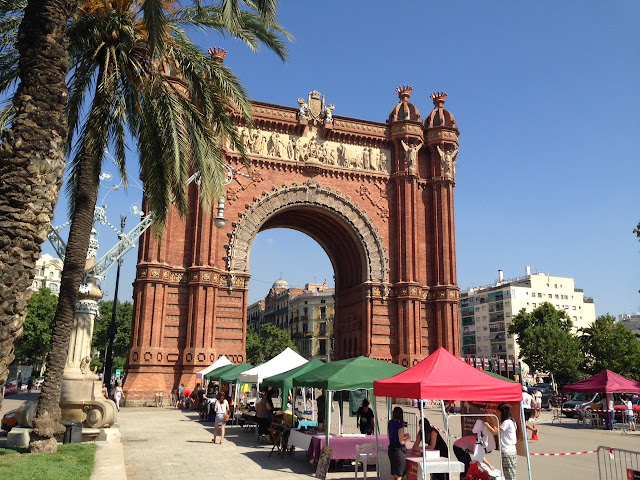 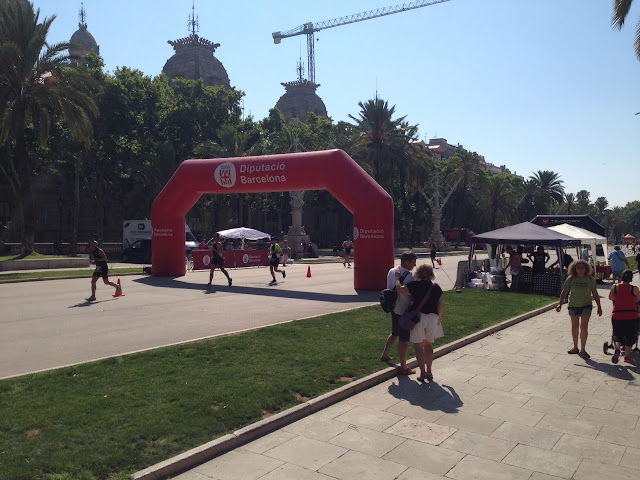 The Arc sits at the end of the panhandle of a good sized park that essentially goes to the beach. This is the same park we were in on Friday, just the very north end. There was a race of some kind going on today.

Next on the list was La Sagrada Familia, Gaudi’s most famous work. Construction began in 1882 and is still going; it’s current projected completion date is 2041. Gaudi’s original plan had 18 towers in it and I think only 8 or 10 have been built. There is a €15 admission fee to fund its ongoing construction. 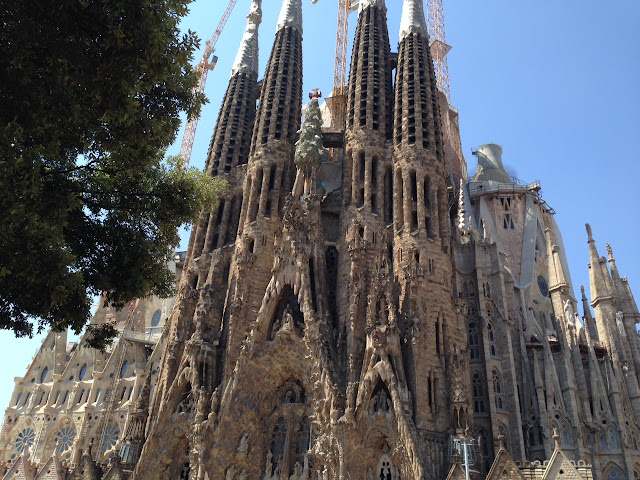 In a rookie move, I had neglected to buy tickets online, and if I had I would have known they limit how many people can go in at once and assign you a time. When we got there at 11:15, 1:15 was the earliest they were letting people in. So we bought our tickets and mosied around for awhile. 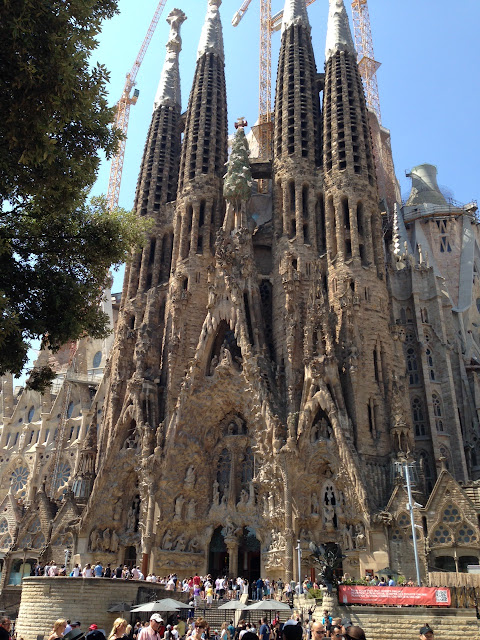 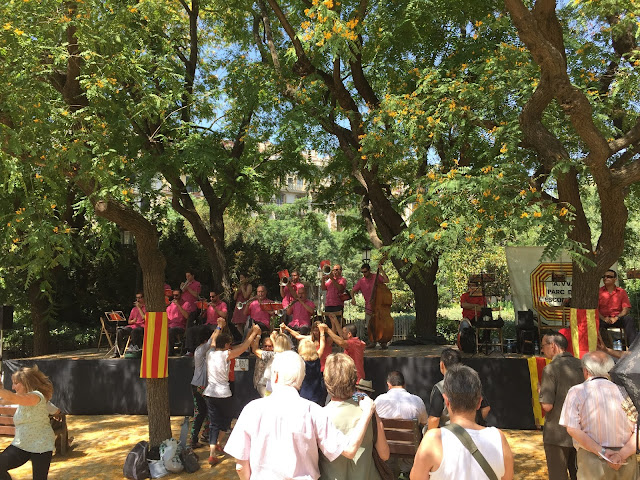 These guys were playing in a little park across the street…. 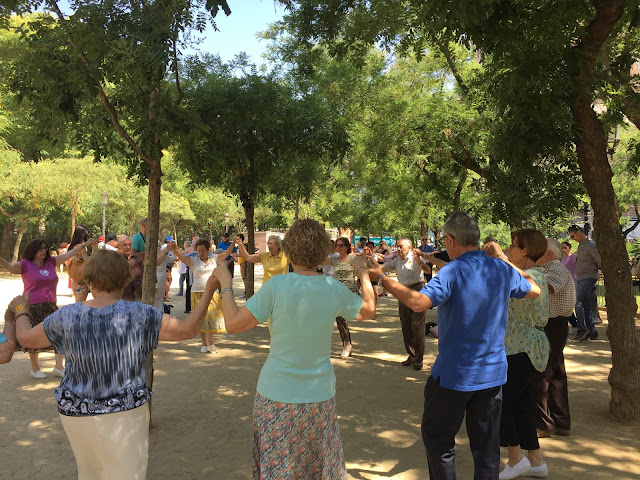 …and there were 4 or 5 circles of folks all over the park doing these cute little dances to their music. 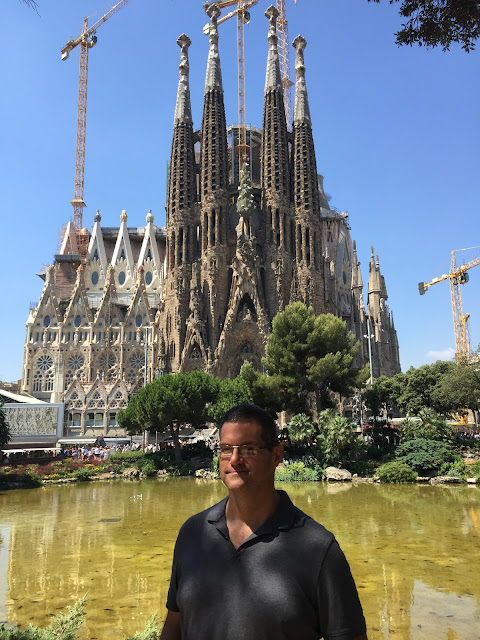 This was taken from the park on the other side of the church from the one above. 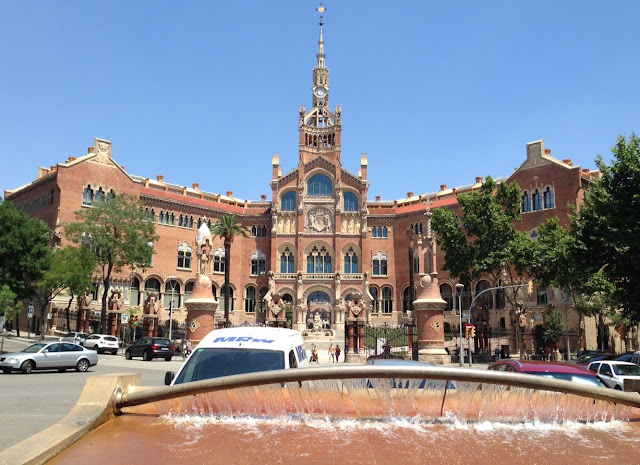 This pretty thing is actually a hospital. 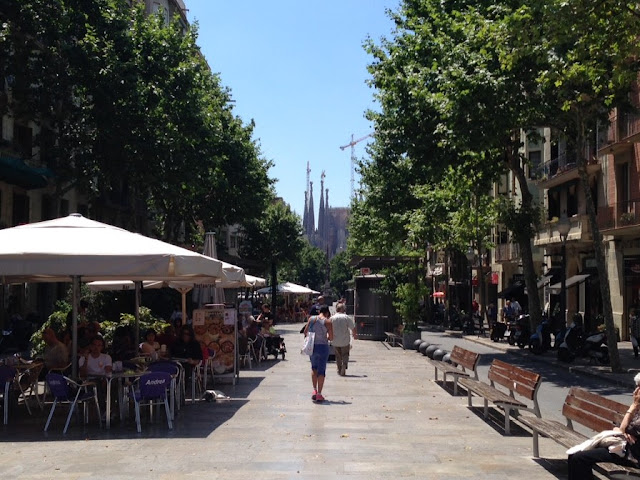 The view when I turned around, with La Sagrada Familia at the end of the parkway.
The two hours went fast (gelato helped) and we were back at the church. In 2010, the pope consecrated it, and it’s been a World Heritage Site since 1984 with six other Gaudi properties in Barcelona, including Casa Batllo. We got an audio guide and started making our way around the property. 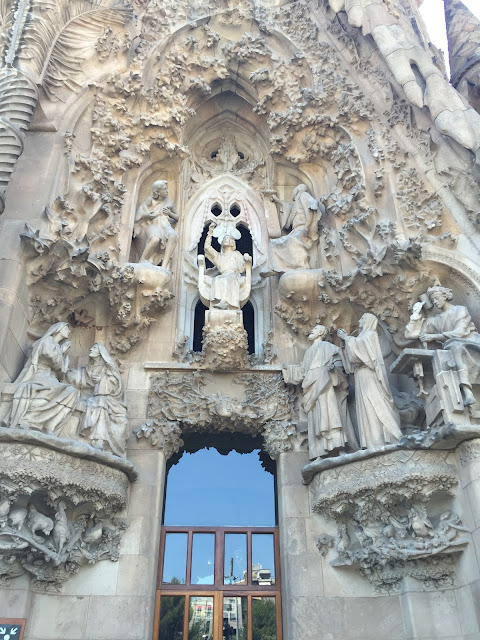 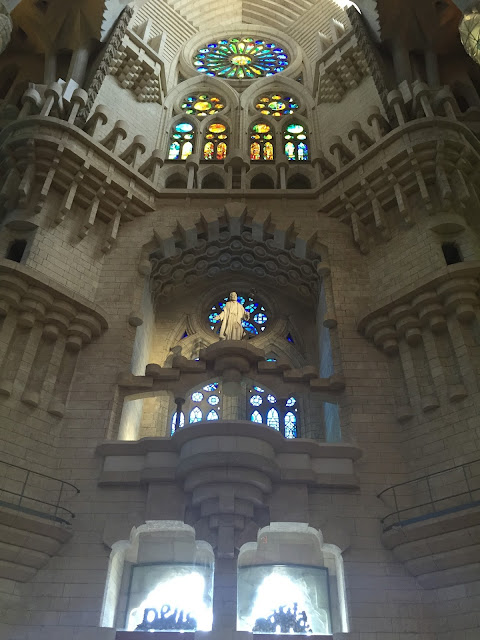 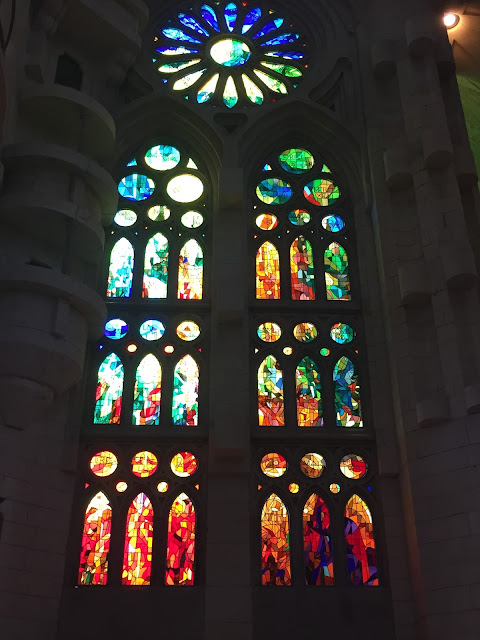 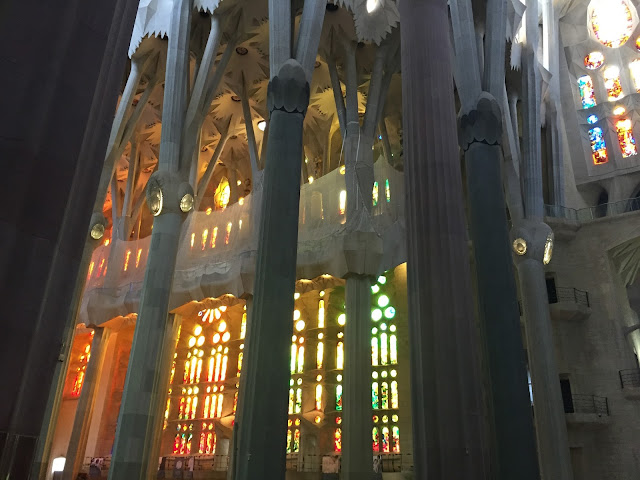 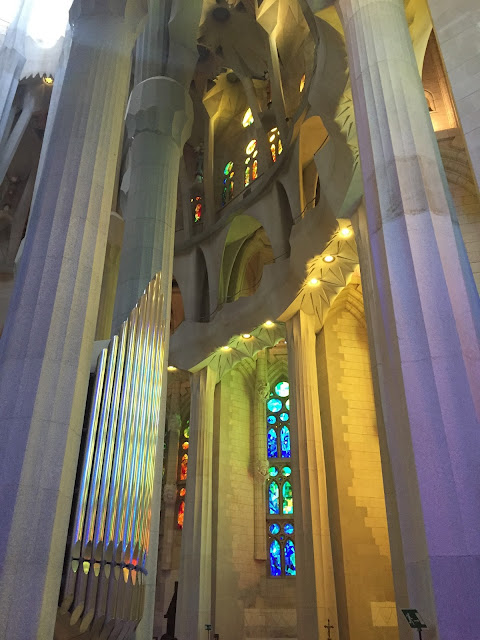 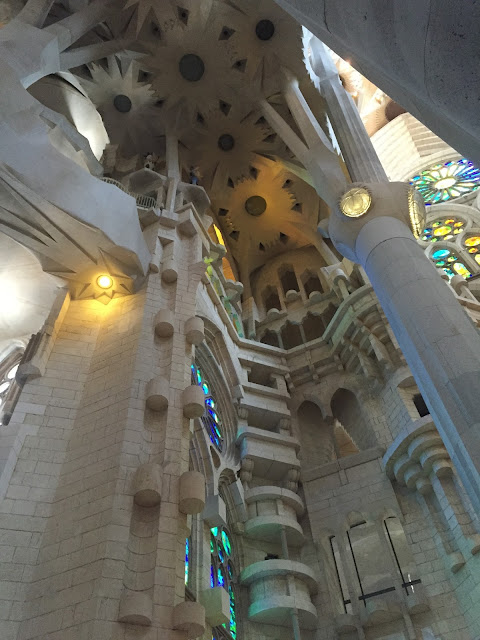 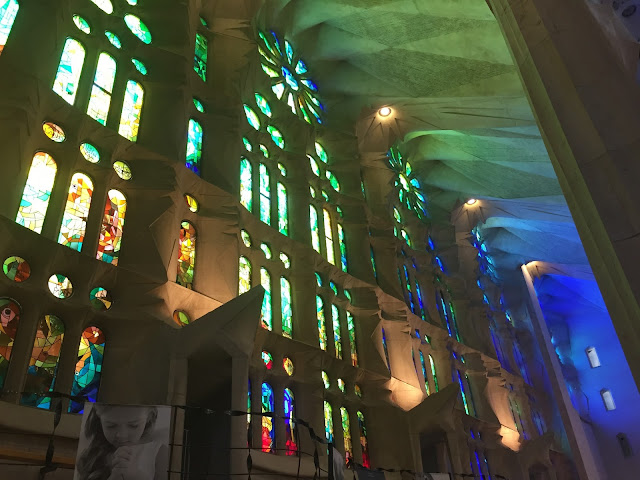 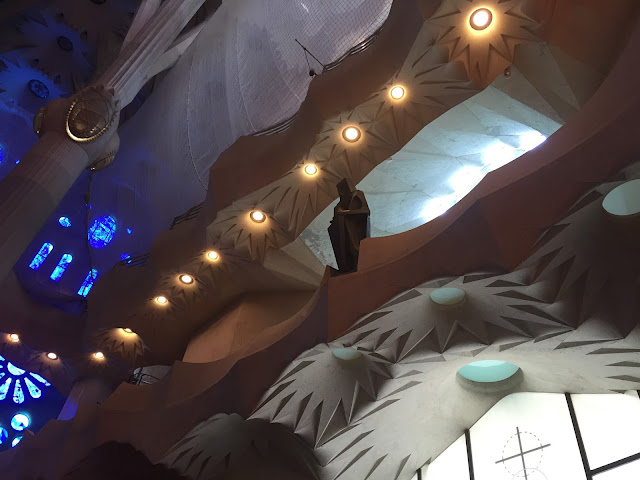 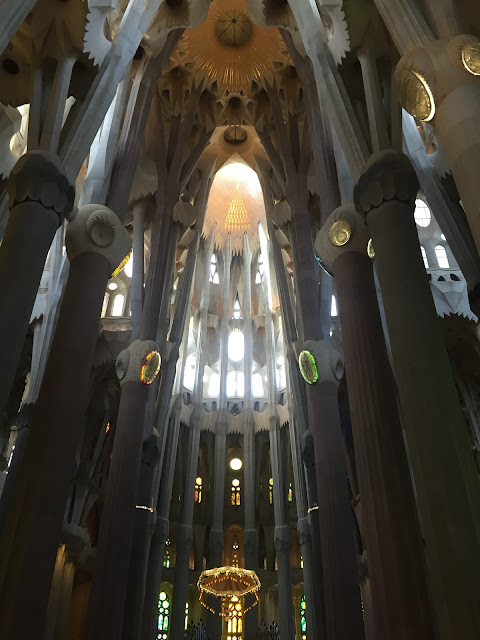 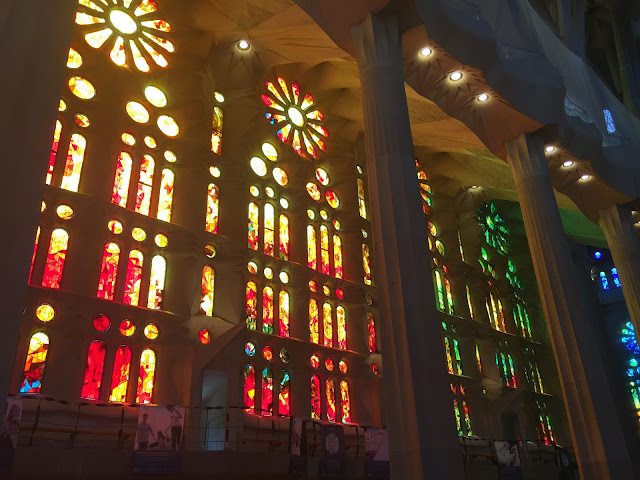 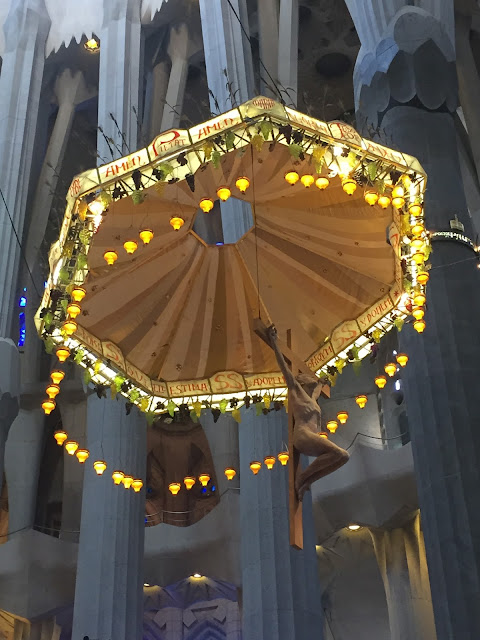 There’s no doubt about it, it’s beautiful and amazing in a lot of ways. The audio guide gave lots of information of how Gaudi wove in certain elements intended to represent nature – such as the columns supporting the arches designed to look more like trees. Lots of little details like that throughout. It’s well thought out and executed.

But in the end we think it’s over-hyped. It’s probably just us. If this was your first big church in Europe, it would absolutely blow you away, guaranteed. But something felt manipulative about the way the money was collected – 15 to get in, another 4.50 for the audio guide, another 3.50 if you wanted to go in the towers – all under this heading of contributing to the glory of God by building it by the people for the people. Or something like that. This probably felt weird to us because we’ve never paid to just enter a church before. They were blatant about “you’re helping us continue construction,” so at least they were honest about that. But rather than building for the people and the glory to God, it really felt like it was glory to Gaudi. And that’s fine, just call it what it is. So being under-whelmed by quality relative to other stuff we’ve seen and feeling manipulated to pay a relatively large entry fee just left us with a bad taste in our mouth. If it’s really “for the people, by the people”, which was repeated several times, then let it be driven by contributions only – the way every other Catholic Cathedral in Europe was built. We in particular didn’t care for the hypocrisy: it’s everyone’s church, but really only if you can pay €15 to see it…

After that, we walked about 1.5 miles – mostly up – to Park Guell, a park heavily influenced by Gaudi. There was a museum section to this piece as well – that we would have to wait 2 hours for again because we didn’t buy in advance. We were just like “no way” and just walked around the park some. It was pretty. 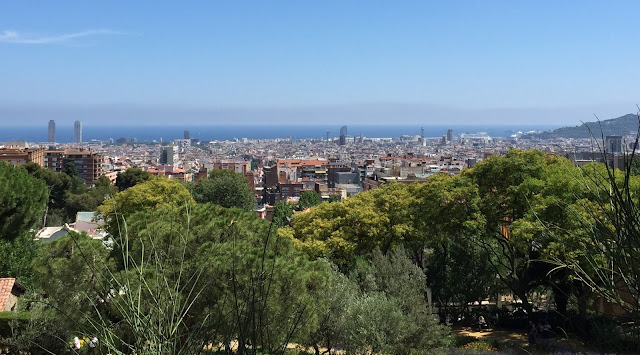 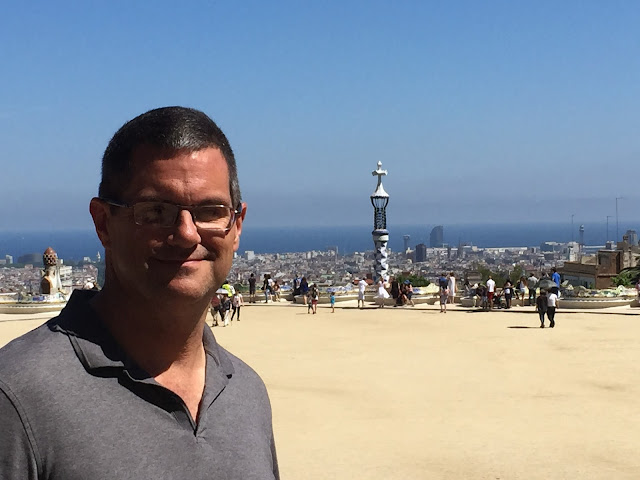 From there we took about a 30 minute bus ride to Platja de la Nova Icaria – a beach. Although it was warm – 84 – there was a nice breeze and it was lovely in the shade. We walked around for about an hour and then had a really nice dinner at a restaurant on the pier. 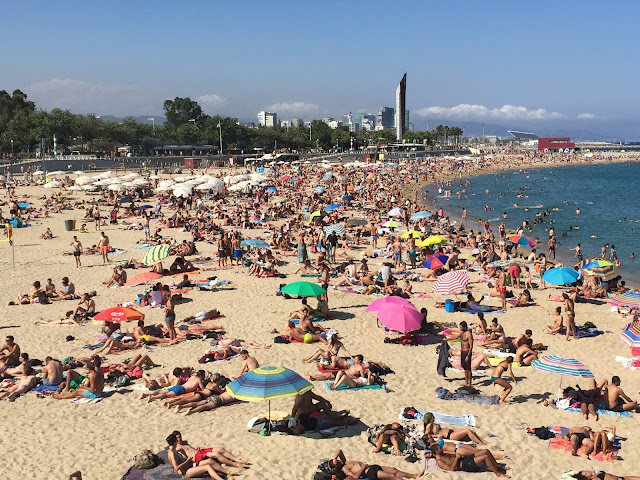 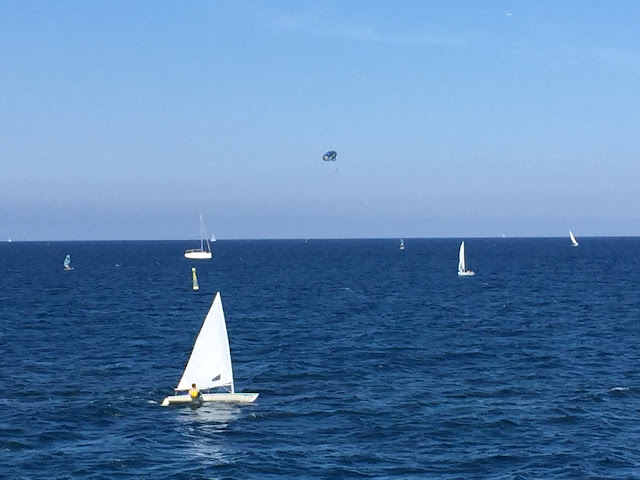 This is the first time I’m seeing the Mediterranean Sea. It’s So Blue! 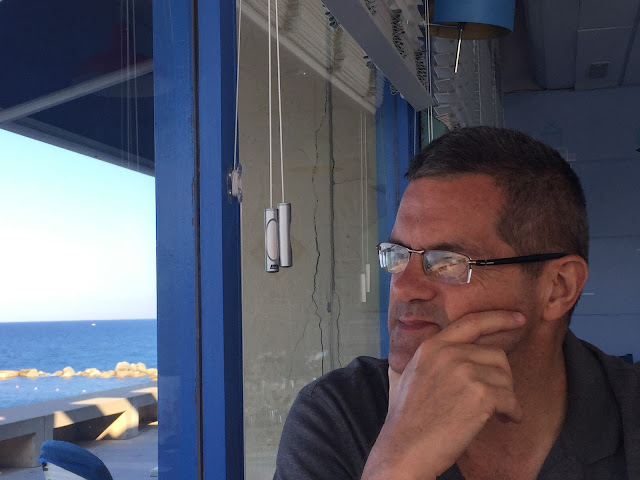 Can you tell the difference between the one above and below? 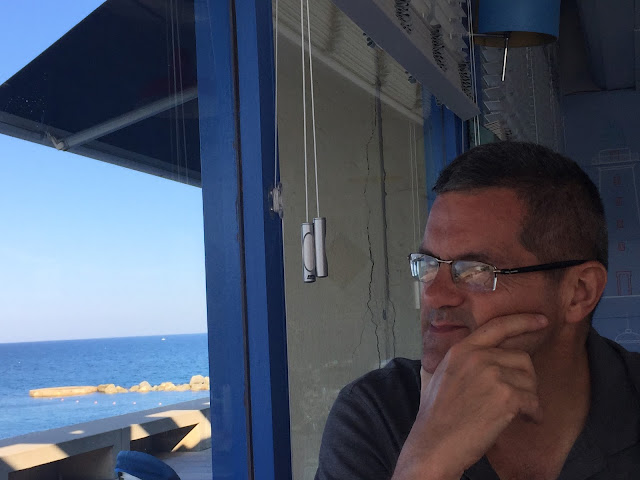 We were back in the apartment “early”, about 8:30pm. We joke about this now because it’s when most folks in this region begin to think about dinner; 10pm is actually a more typical time. But we had been out for 10 hours and were tired, plus needed to pack: tomorrow we leave for Helsinki.