It’s 10:40am, Dan is still asleep. He didn’t sleep well last night so I’m glad he’s getting some rest now. We had plans to leave by 8am; he needs to get to a Bayer office here in Paris to take care of a computer issue he’s having as he still needs to do some work while we’re traveling. That he didn’t budge when I woke up at 8am and let him know what time it was told me a lot about how tired he is. So he sleeps.

I went downstairs and over to the bakery around the corner – because there’s one around every corner! – and got a different kind of baguette from yesterday and 2 croissants. Dan had said yesterday “I’m surprised you didn’t get croissant” and when he said it so was I. It’s perhaps my favorite baked good – so simple – but yesterday it hadn’t even crossed my mind. The one I had this morning was perhaps the best I’d ever eaten. So much rich buttery flakiness. It’s astounding how much better the breads are here. Not sure what that’s about. But there are TONS of bakeries, bread and pastries are a serious part of the culture. Our first walk out of the flat on Saturday, we nearly ran into a little boy, maybe 6 years old, running up the street with two baguettes in his arms. So cute. So Parisian.

So I’ve been sitting here drinking coffee and continuing my Churchill reading. I’m just past mid-way of the 2nd of 3 volumes, and am only at 1939. But the background I get from this reading puts so much of everything else I’m seeing into perspective it’s very valuable.

It also struck me as I was sitting here how little I’ve thought about work since I’ve been here. When we left that first day I was afraid I was going to have trouble disconnecting, but it happened pretty quick, as it did last year. There’s something about being immersed in a foreign culture that forces that I think. There’s no automatic pilot whatsoever, you have to think about everything. Or at least I do. And not that it’s hard or strenuous, there’s just so much to take in and process, it leaves little room for anything else. But I haven’t figured out I’m in a different country yet – I keep saying Danka instead of Merci! We have 3 more days here, maybe I’ll get the hang of it before we leave.
—————————————————-
Dan woke up about 11am, we made the same breakfast we had yesterday, still using the groceries from the open market on Saturday: eggs, sausage, 2 kinds of cheese, tomatoes, and of course fresh bread. Yesterday we’d only eaten 2 full meals because we had such a late start, and we did the same today. We left the flat right at Noon. Dan went off to work and we agreed to meet at the Louvre when he was done; he would text me when he was on his way and it would take him about 30 minutes to get there. So, here are a couple of other great advantages to adding the international package to the phone for the trip: we got to text, I had access to GPS when on my own, and Google maps gives great directions on how to use public transportation. At least it has here; we’ve used it a lot and it’s been dead on every time.

We had only walked up a portion of Champs Elysees yesterday, and I wanted to walk the other end of it to see where it begins, but didn’t want to walk the whole thing. It’s actually kinda boring – lots of retail stuff that you can see at home, some other stuff too of course but touristy. So I took some alternate paths to reach it less than mid-way between the beginning and Arc de Triomphe. I love walking through normal local neighborhoods in any city, but especially foreign ones. More than almost anything else you get a sense of what it might be like to live there.

Parisians must have a thing for American Presidents. We noticed it the first day: one of the first streets we were on was President Wilson Avenue, as in Woodrow. Presumably for sending American Troops into WWI. Britain and France had been in it since 1914 and were close to losing from exhaustion and lack of resources – human and material. It’s conventional wisdom here that the war wouldn’t have been won without USA participation, which wasn’t until 1918.

So this morning I turn a random corner and run into this cute little park. 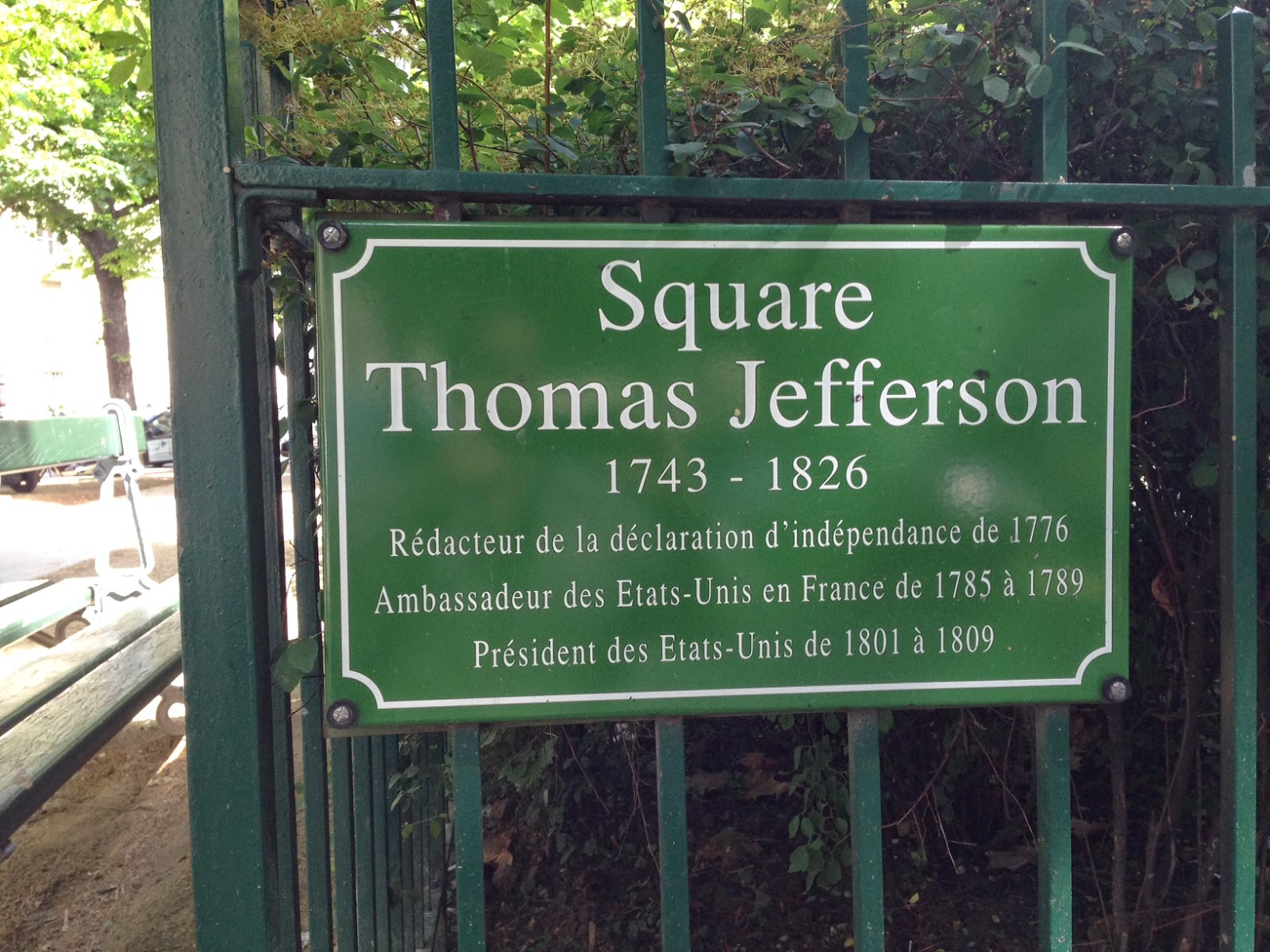 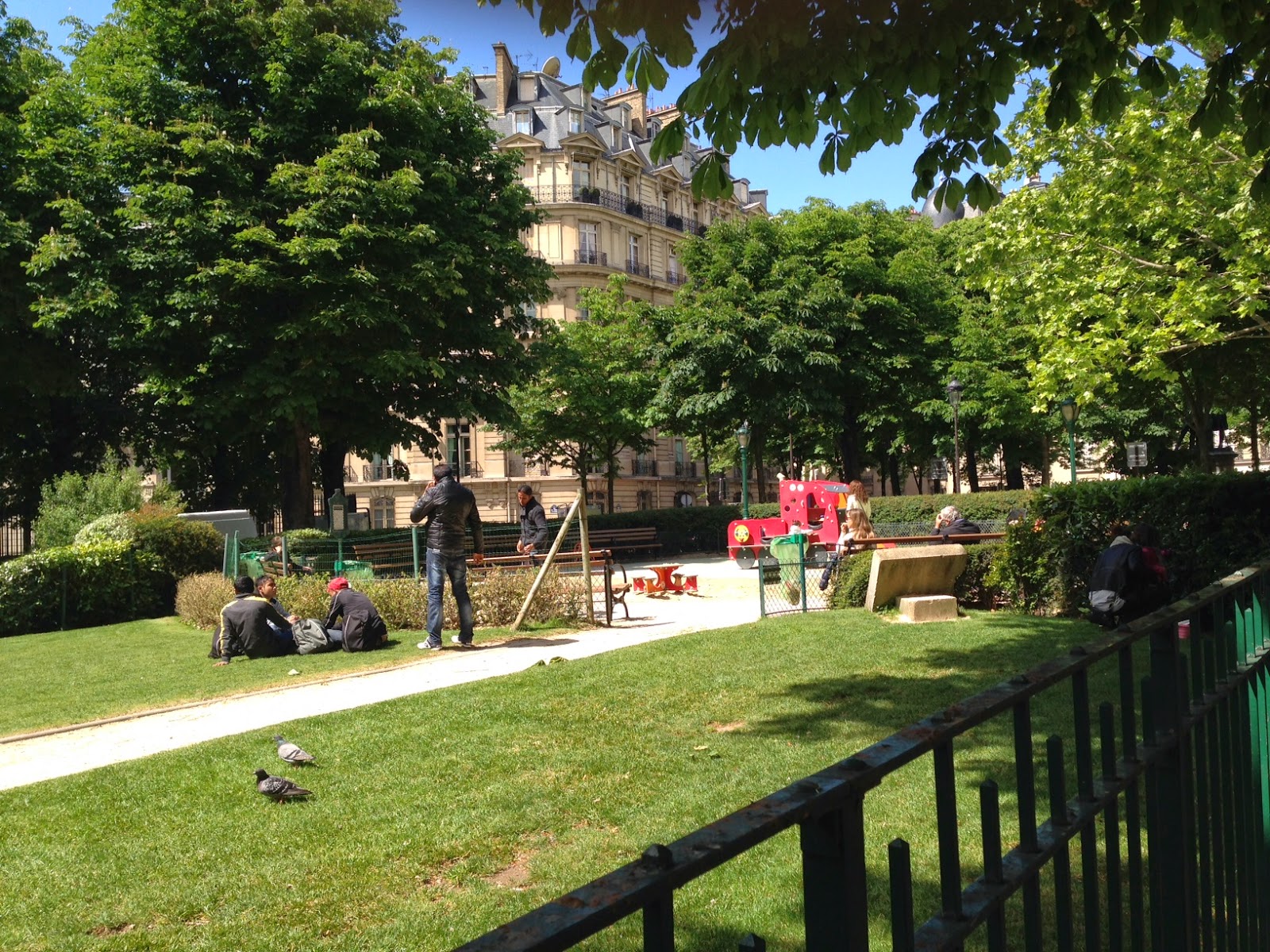 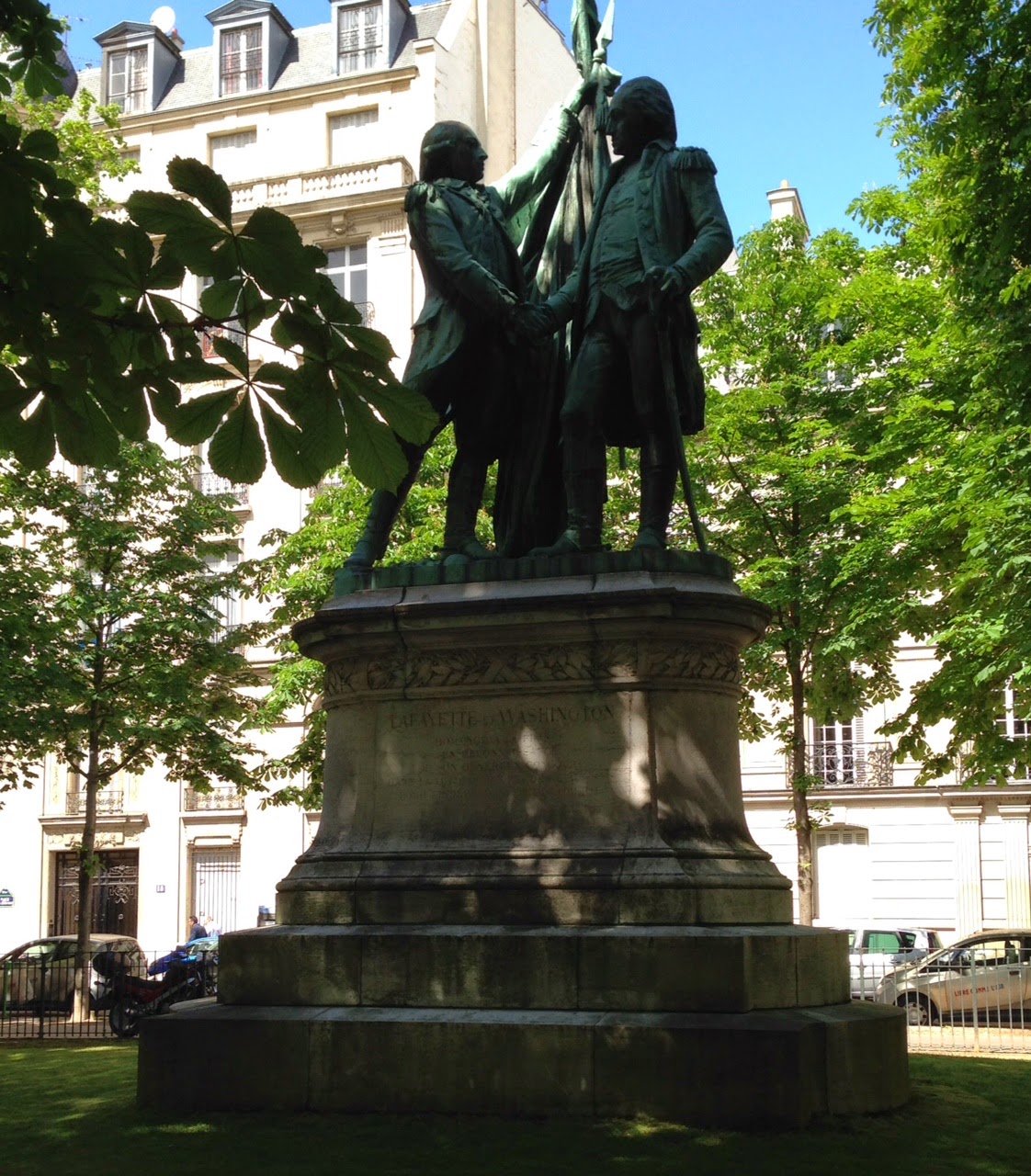 And across the street from that is this statue of George Washington with Lafayette.

Below is an example of a random local street, classic Paris: wrought iron fences on the balconies, a little restaurant with red awning and pretty red flowers on top. Street after street of this stuff. And this one is light, there’s often more eateries and stores on the street level, although some of our immediate neighborhood appears to be 100% residential. But it still looks like this. 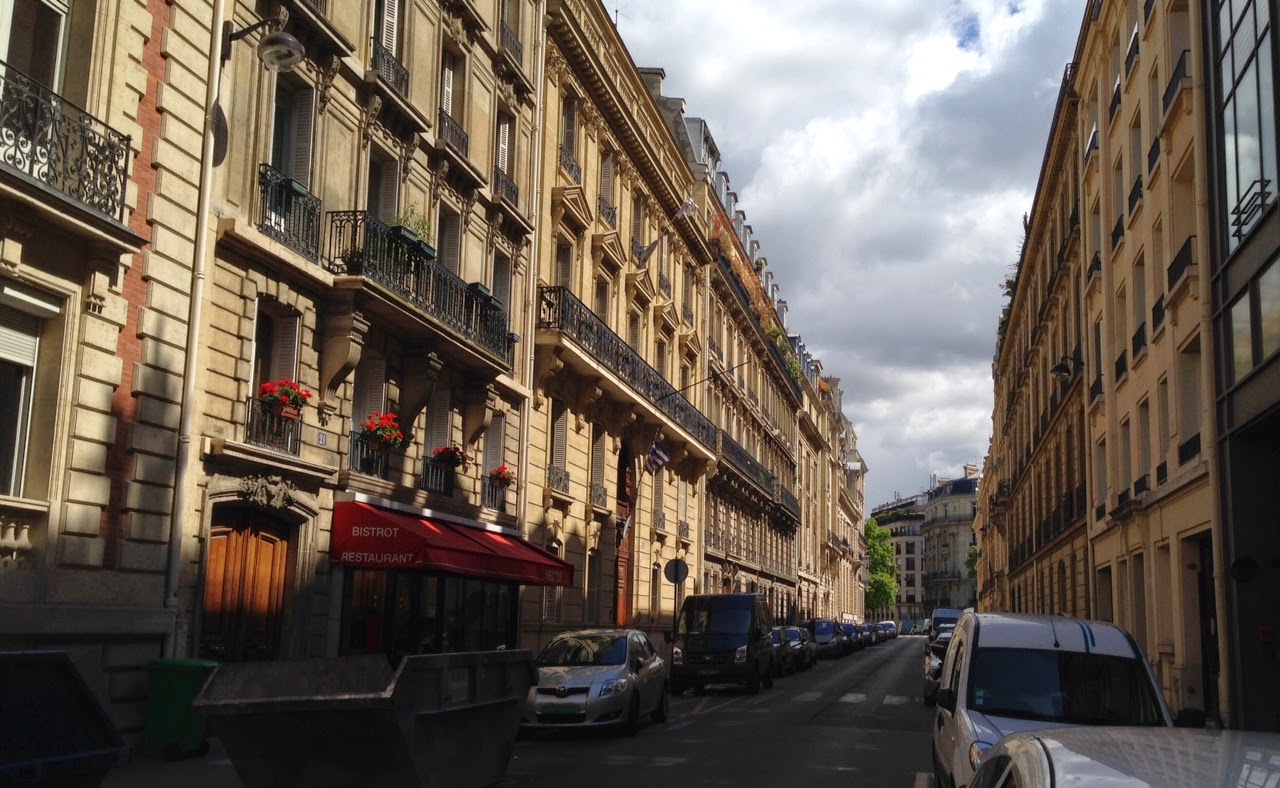 I get here and recognize the intersection because of the flowers and the fountain, we’d crossed it before from a different direction. You can’t really tell in this picture but the flowers are growing upward, like in a bank. Each corner of this huge intersection looks like this. By this time I’m on Champs Elysees, so I look up to see what the cross street is. 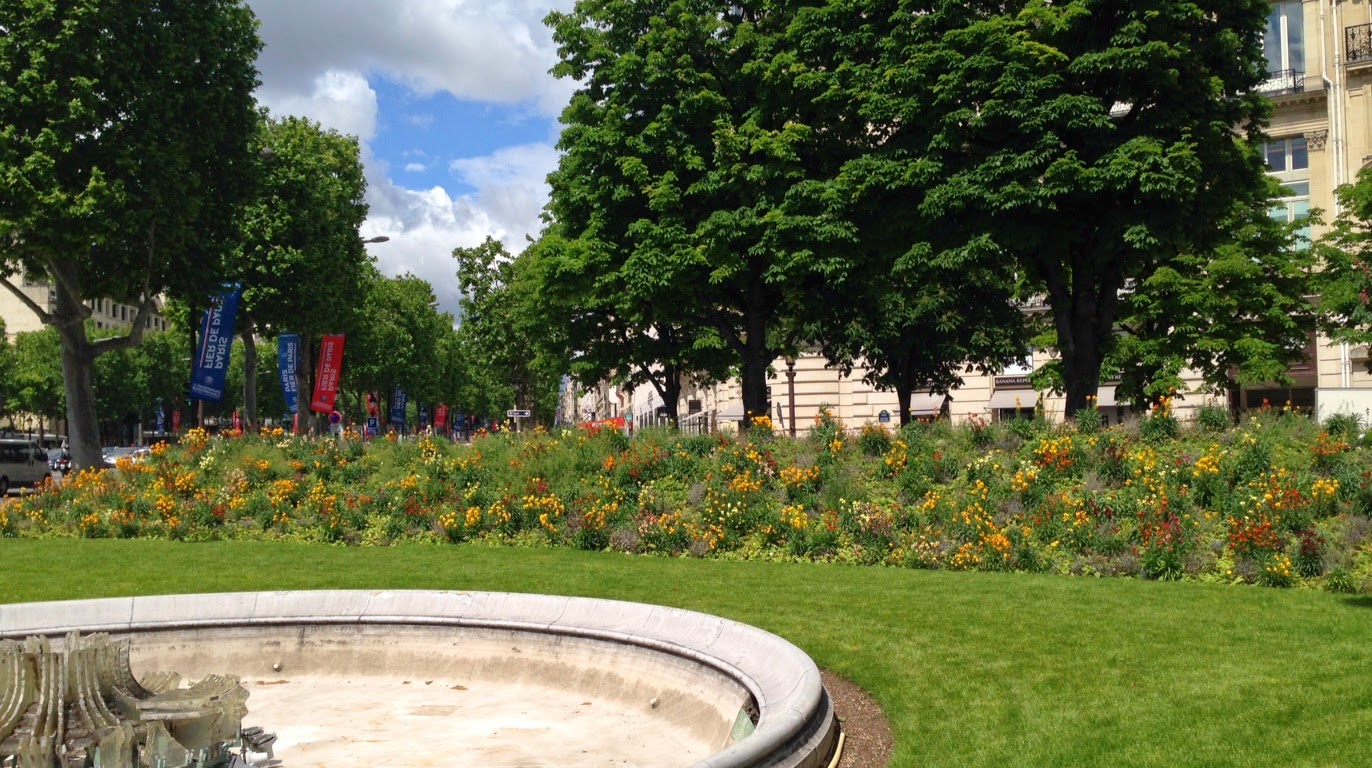 And there you go: more American Presidents, this one names for FDR. The next street? Avenue Winston Churchill. Both of these for their contributions to the winning of WWII. 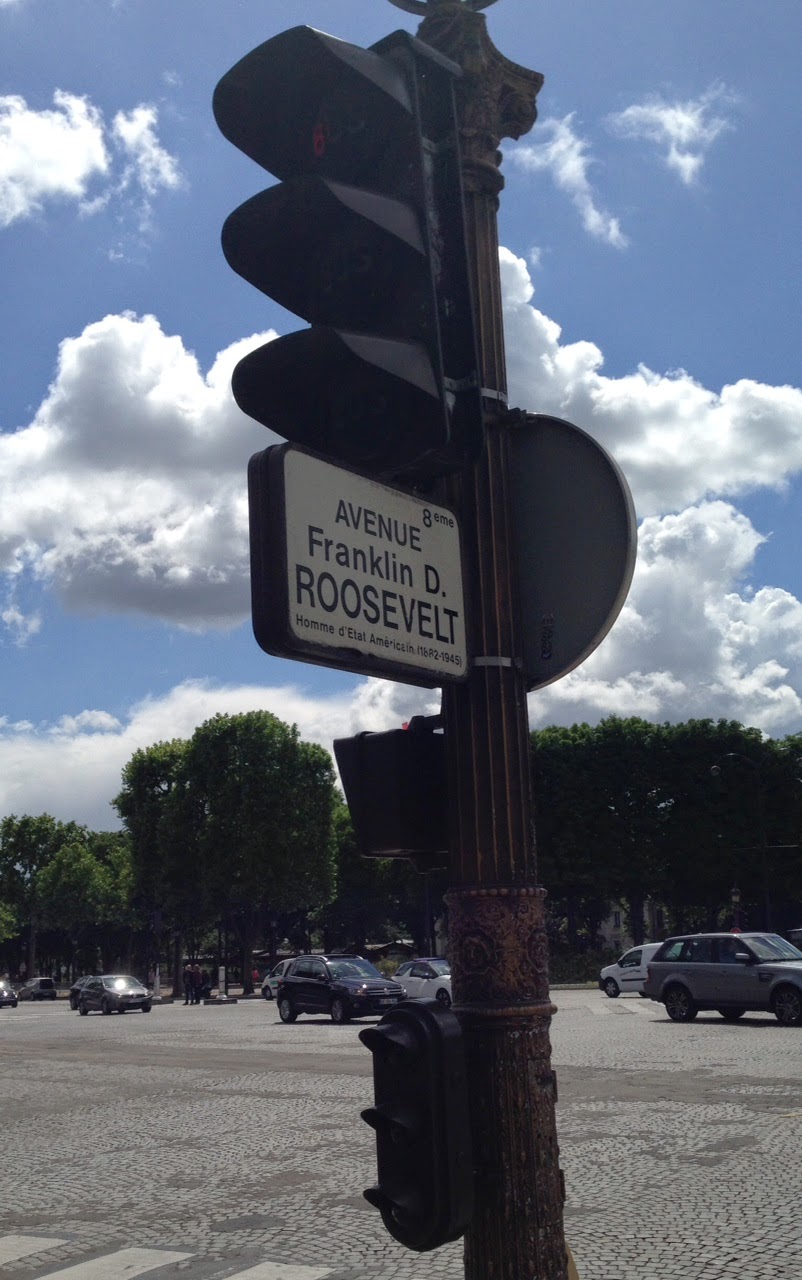 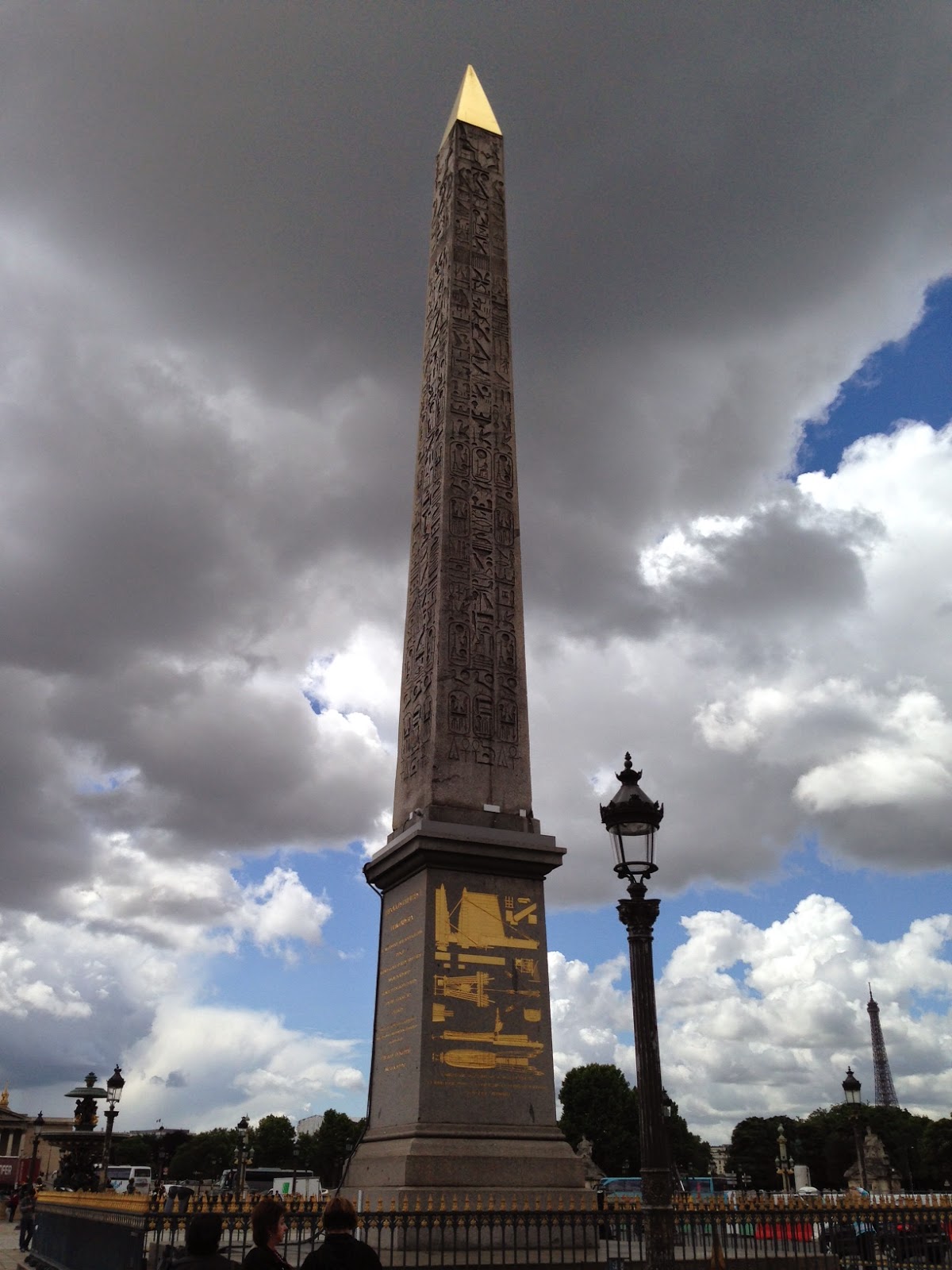 The obelisk in Place de la Concorde, the largest square in Paris and where the Champs Elysees begins. It is sort of the center of everything. This is where King Louis XVI and Marie Antoinette were executed via guillotine in 1793. The square that is. The obelisk didn’t arrive until 1833 and was a gift from the Ottoman viceroy of Egypt, where it marked the entrance to the Luxor Temple.
Beyond the obelisk is the start of Tuileries Gardens, where we were on Saturday. I walked through a piece of that but decided I wanted to go in search of a place to get some coffee and sit for a bit. By this time it was about 1:30pm and I figured that would be about the earliest I heard from Dan. It started raining pretty hard so out came the umbrella again – 2nd time that morning – and I went off the main drag a block to get out of tourist town as I was coming up on the Louvre. I wound up on Ave St Honore – that street from Sunday that we thought was very high end, but went in the other direction. I’d passed the Louvre at that point and looked at my phone. Sure enough, a 1:36 text from Dan: “Still here. Go on to the Louvre and I’ll meet you inside.” I never did stop for coffee!

Notice the lack of people in the above photo. That should have been my first clue. It’s closed on Tuesdays. What a Rookie Move. Several weeks ago, I’d spent a Sunday afternoon carefully mapping out our days here based on what’s open and closed when, and what has evening hours. I’d forgotten to double check all that when we scrambled our plans once Dan got sick. Oh well. I was already thinking we’d gotten way too late a start to get in 2 museums today, so double checked the status of the d’Orsay: Open. Sweet. Texted Dan that I would meet him there. Luckily, you walk out of the Louvre towards the Gardens, take a left, cross the Seine, take a right, and you’re at the Musee d’Orsay.

The museum pass we purchased yesterday got us in here, too, and could use the shorter line with it. I was in by 2:20pm. Dan joined me about 3:30. Now THIS is an art museum. Not a single thing in it we could have done ourselves 🙂 I really did enjoy it. It has a huge impressionist collection, which is probably my favorite period. As Dan said, “Monet’s are a dime a dozen here.” There’s that many, most on one floor but some sprinkled all over. Same with Renior, another favorite of fine. Picked up 3 others names here of works I really liked that I’d never heard of before, from the Neo-Impressionist period: Paul Signac, Maximilien Luce, and Alfred Sisley. You weren’t supposed to take pictures so I found some images on the internet.

We left about 5:20pm. We wandered around new streets we haven’t been on in search of French food for dinner. Found it! Another restaurant that offered a 3 course meal for a single price, like the one yesterday. Very different ambience – this a little more fine dining than yesterday’s – but the food was just as good. In both cases the desserts were arguably the best, although Dan loved the fish course he had yesterday. (It was pretty amazing – probably the best thing we’ve had on the trip so far.) After dinner we stopped at a little market for some things to get us through 2 more mornings of breakfast and of course bottled water – the tap water in the flat is Terrible. We passed this on our walk back. 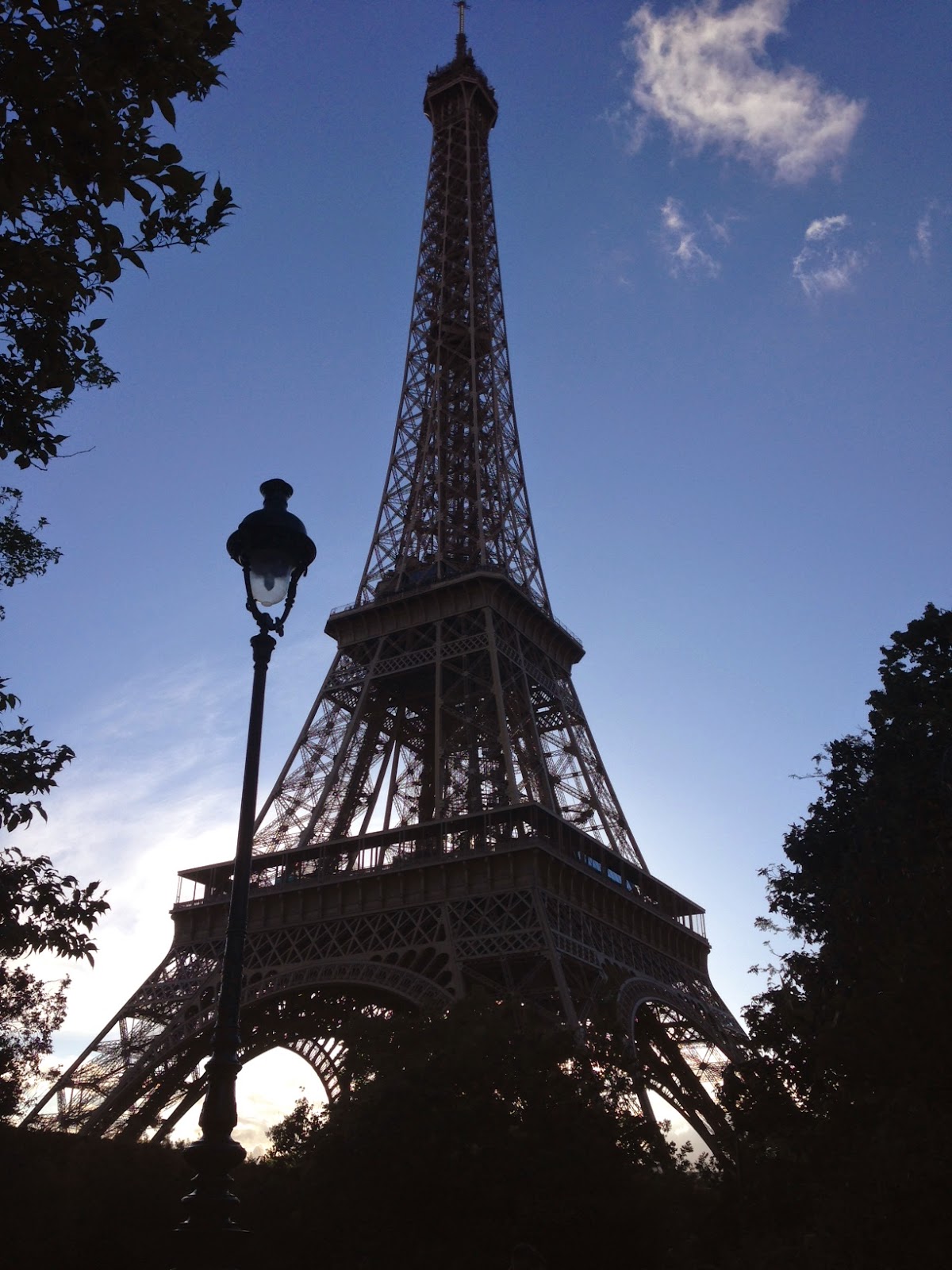 Tomorrow’s plan: Versailles during the day, Louvre in the evening. We’ll see how it goes!