We made breakfast out of our market purchases yesterday: bread, cheese, tomatoes, strawberries, and some sausage that’s really more like a jerky but easier to eat. We were out the door by 6:20am, and walked about a mile to a metro stop that took us the rest of the way to our meeting point about another mile away. The subway ride saved us about 15 minutes and we didn’t feel rushed to get there.

We went back and forth on whether or not we were going to work Normandy into this trip or save it for another time. It’s not the easiest thing to get to. Your options are 1. tour bus – convenient but you’re not in control, and not exactly cheap; 2. rent a car and drive –  we weren’t crazy about driving in a country where the signs aren’t in English; 3. piece together public transportation – but there was no easy way to do that which didn’t require an overnight stay.

So in the end, obviously, we decided not only to go but to go with a tour. We have read/watched/visited a lot about WWII in the last 3 years and I didn’t see the sense of being this close to it and skipping it when the topic is so important to us. I’m very happy with the way it went; especially since it turns out Dan woke up fighting off a cold or something, and has all day, it helped immensely that we could turn the driving over to someone else. Every time we were on the bus, he was asleep for the most part.

The bus took off from a travel agency right in the center of everything, just across from the Louvre. It was very comfortable, double-decker and we sat on top so had nice views of the countryside throughout the trip. There were about 50 people total. We were imagining we might be the youngest on the tour. Certainly more than half were older than us, but there were definitely younger or similar age, especially the two other couples we had lunch with. Just about everyone on the tour was an American.

The countryside really was beautiful. We had trouble getting good shots from a moving vehicle but these turned out OK.

We drove for about 3 hours and stopped in Caen, at a war museum, the Memorial Center for History and Peace. As WWII museums go, this was a pretty good one – although not as good as the one in New Orleans. We didn’t feel like we learned a lot because we’re so familiar with much of it, but it is interesting to get it from another country’s perspective – in this case France.

A few things I did learn:

We had a very nice lunch, French food of course, at the museum, included in the trip. From there we went to Point du Hoc. This was the highest point between the beaches of Omaha and Utah which the Germans had fortified with concrete casements and gun pits. Some of these are still there along with a memorial. 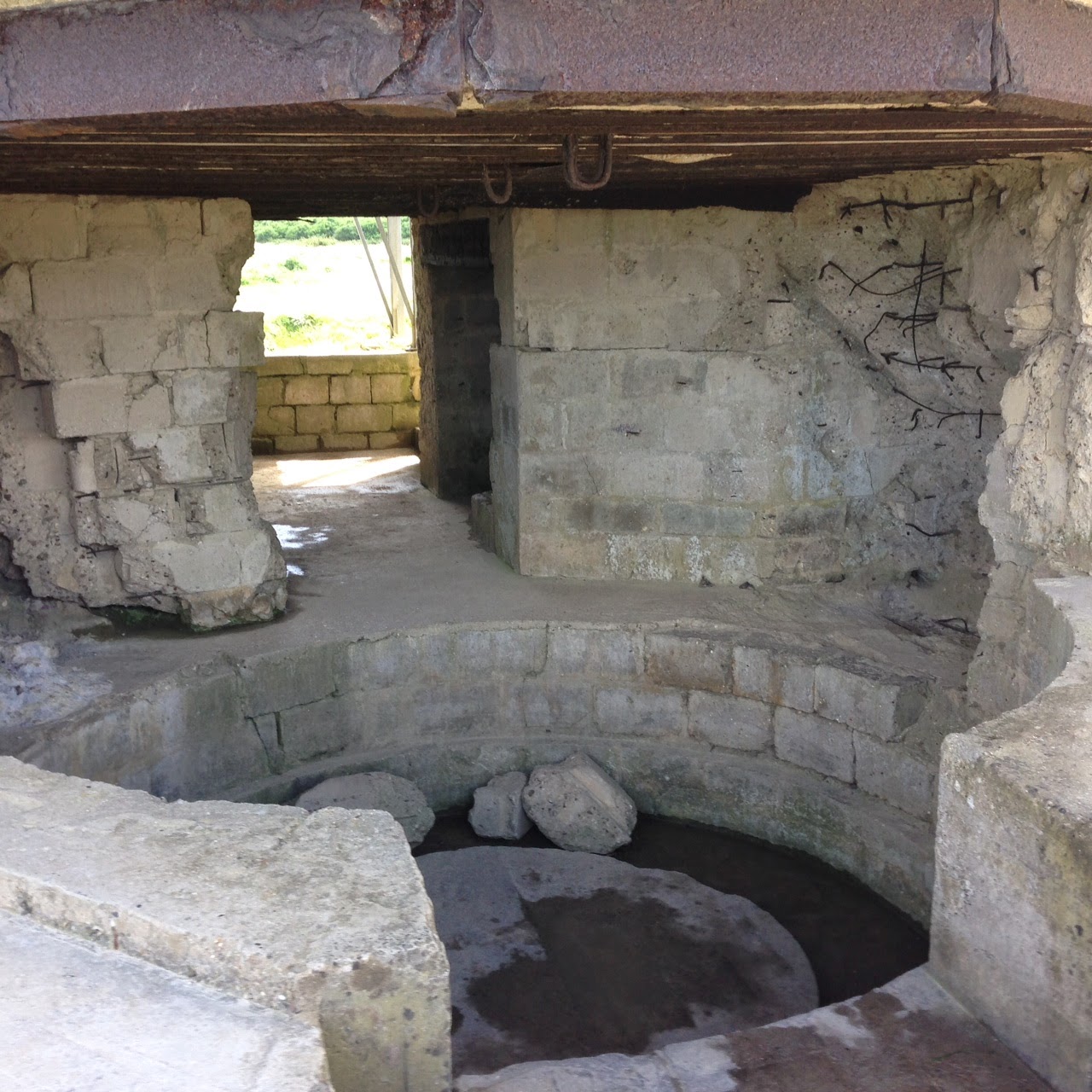 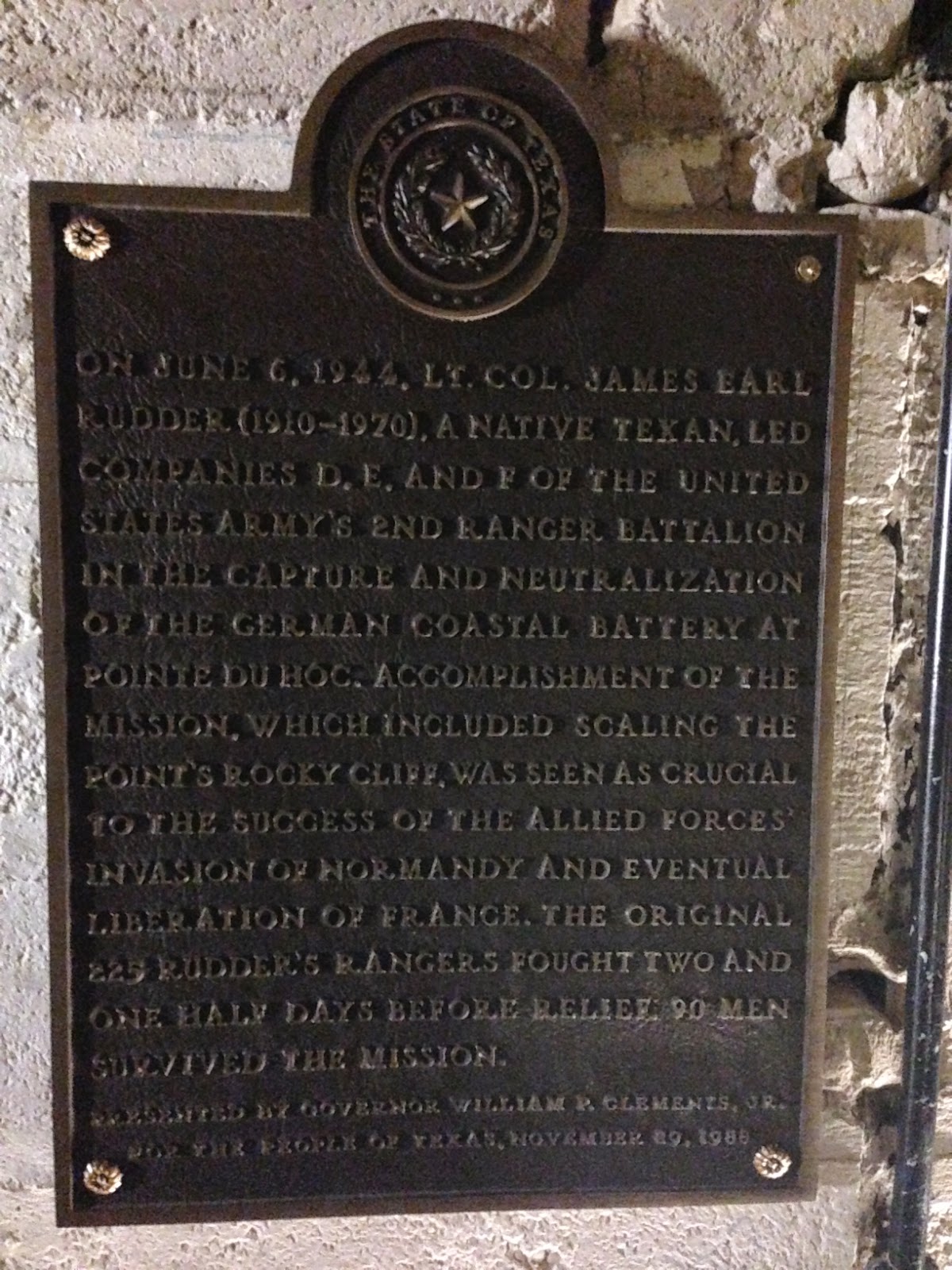 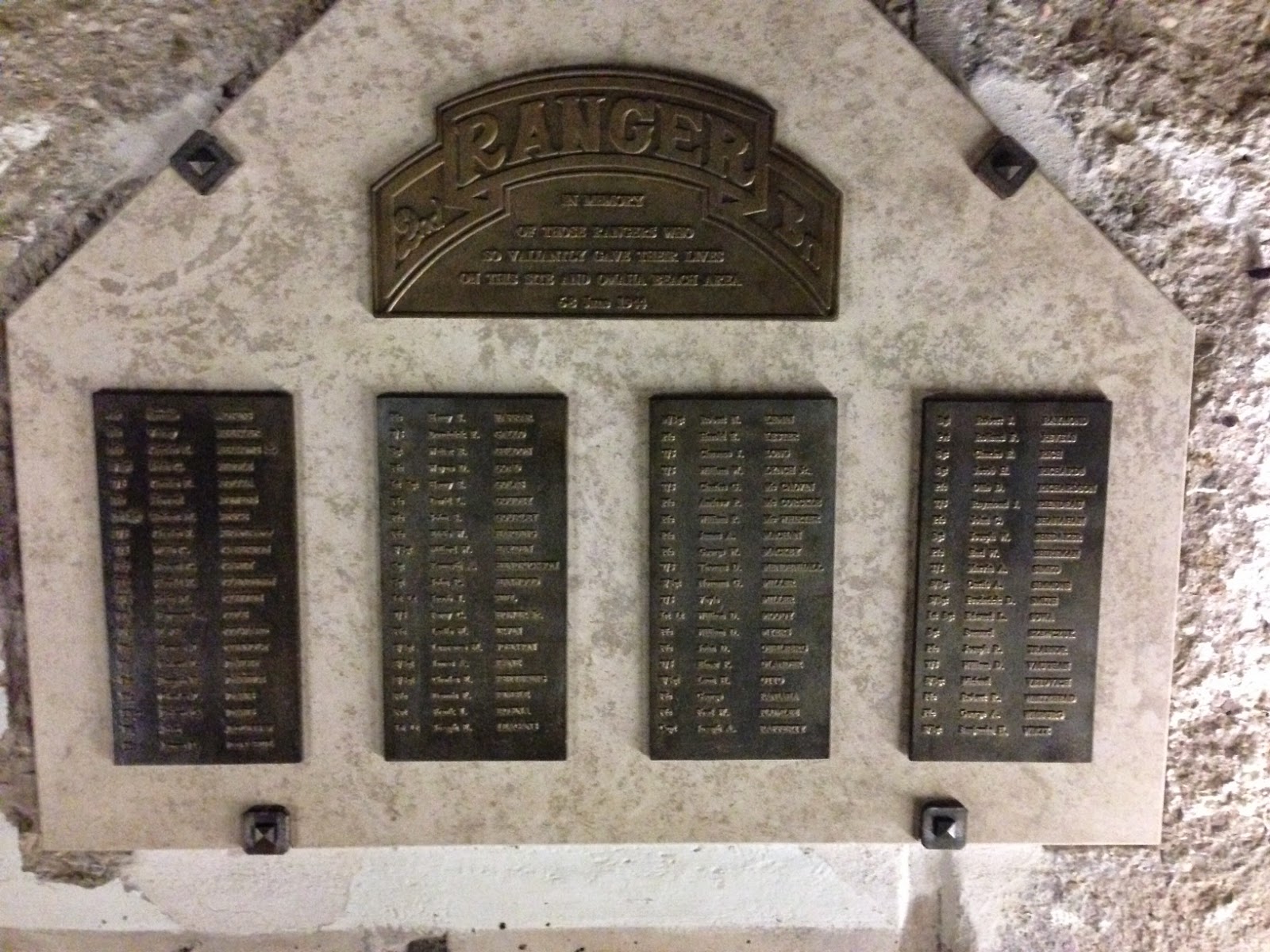 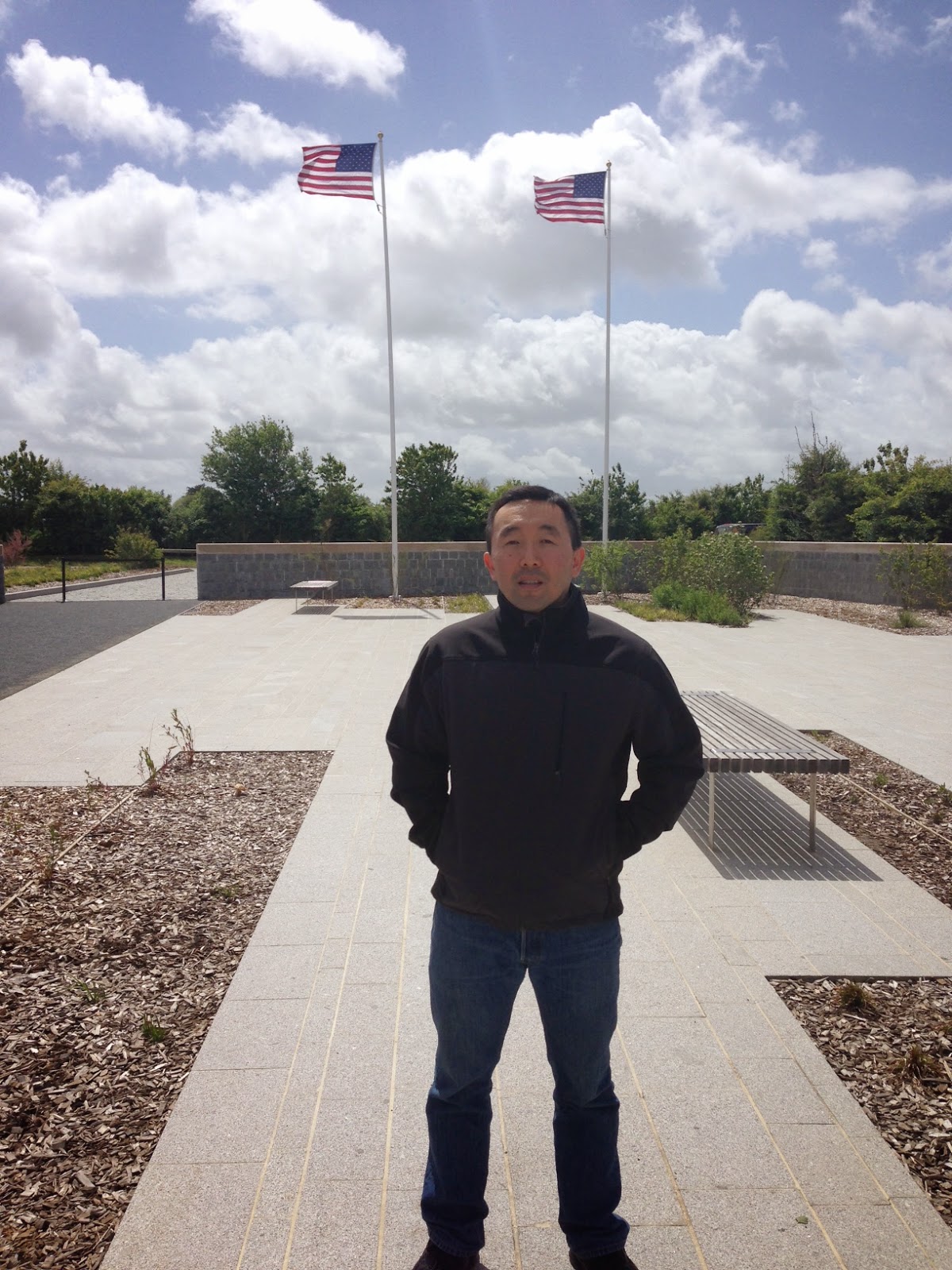 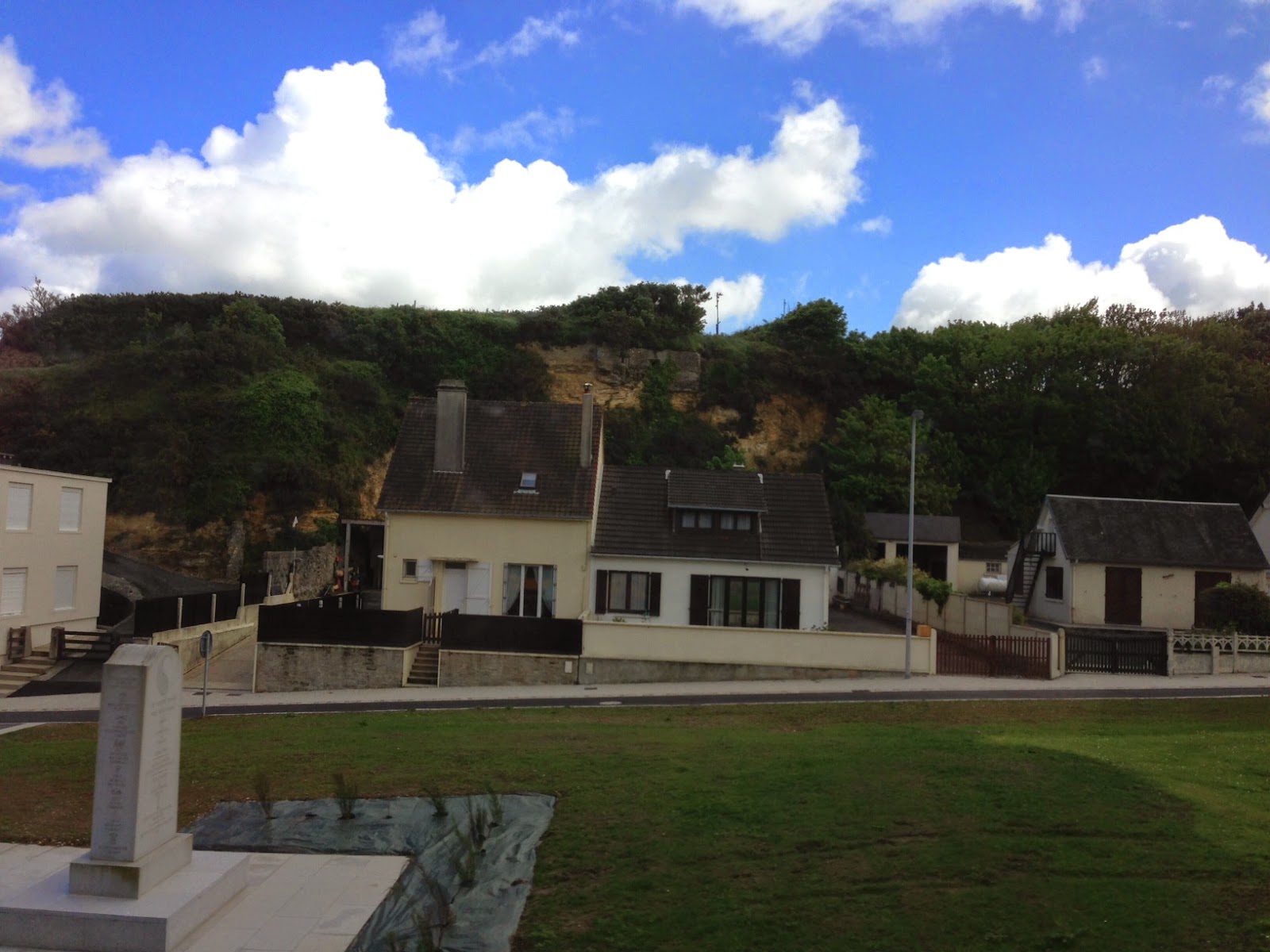 Next was Omaha Beach. I was a little surprised to see that houses have been built on the same slopes the D-Day troops had to climb up. Life goes on I guess. This is just one of many we saw. Better than lots of tacky tourist shops I guess which, I should report, the entire area was mostly free from.

It was surreal to be on Omaha Beach. I didn’t realize we would actually be ON it, ya know? Dan said it was mystical to be walking in the same place as all the heroes who paid with their lives for our freedom. It was amazing to be there. It was long – 5 miles – and wide. Hopefully these shots provide some perspective. 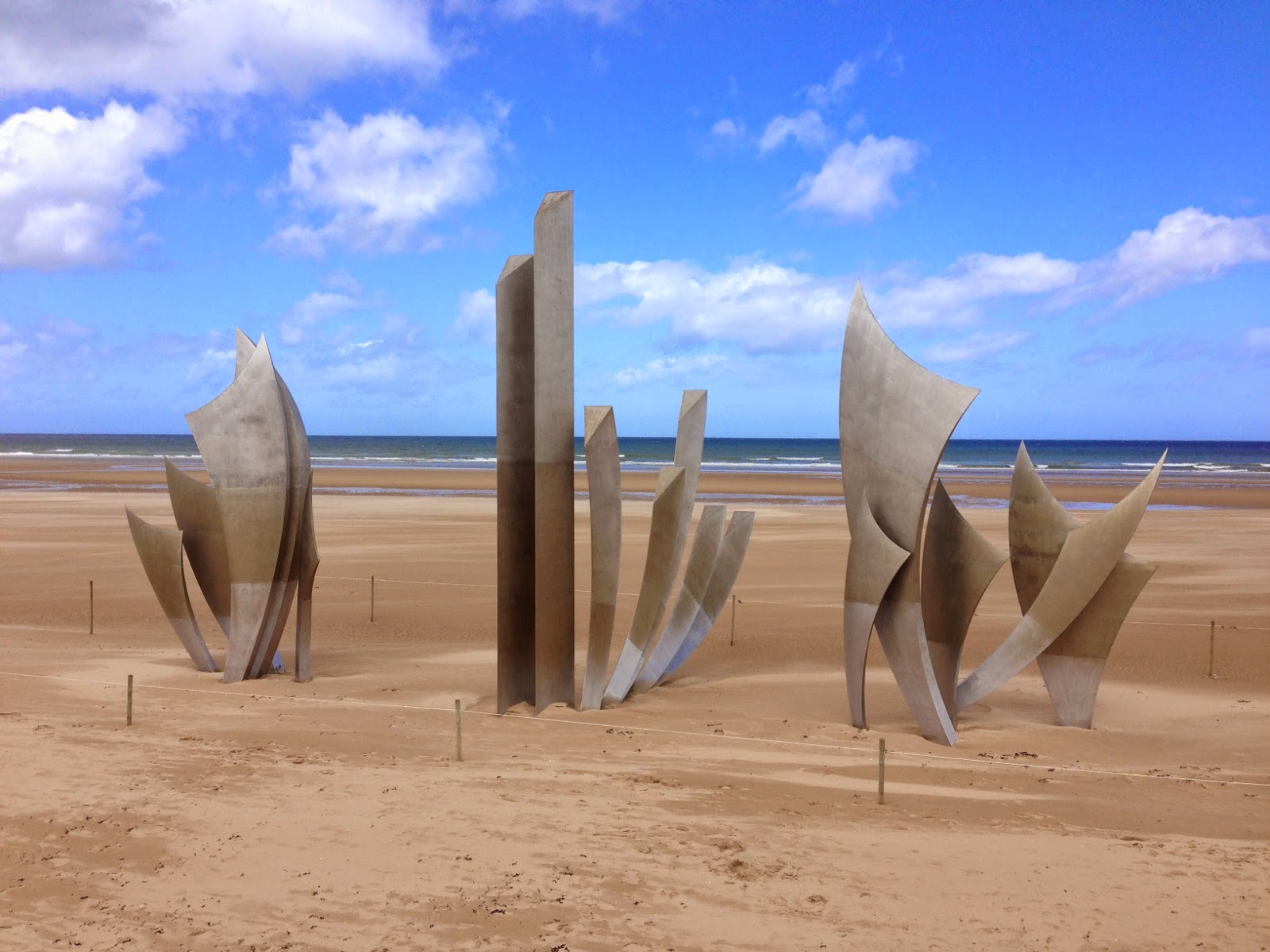 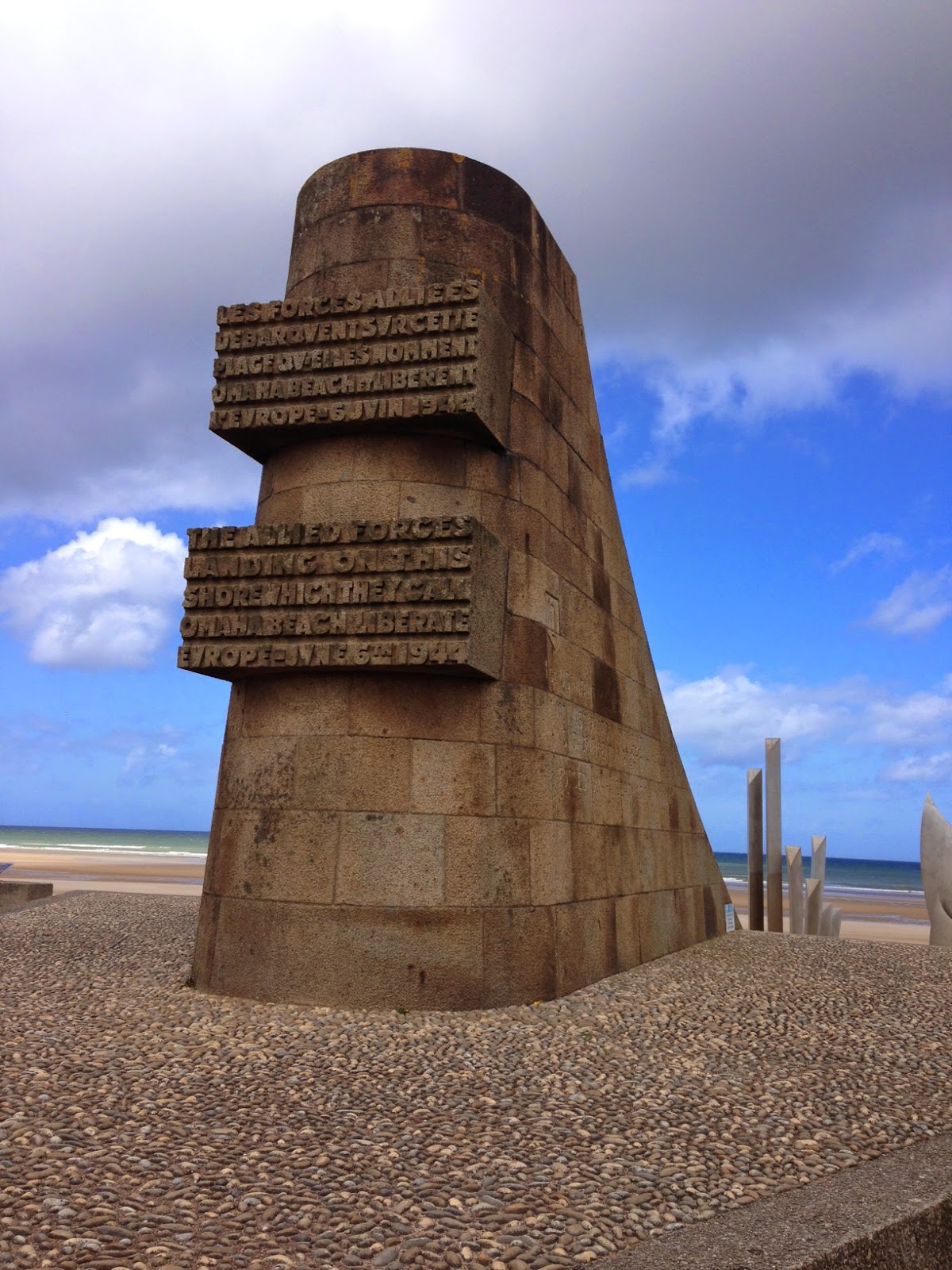 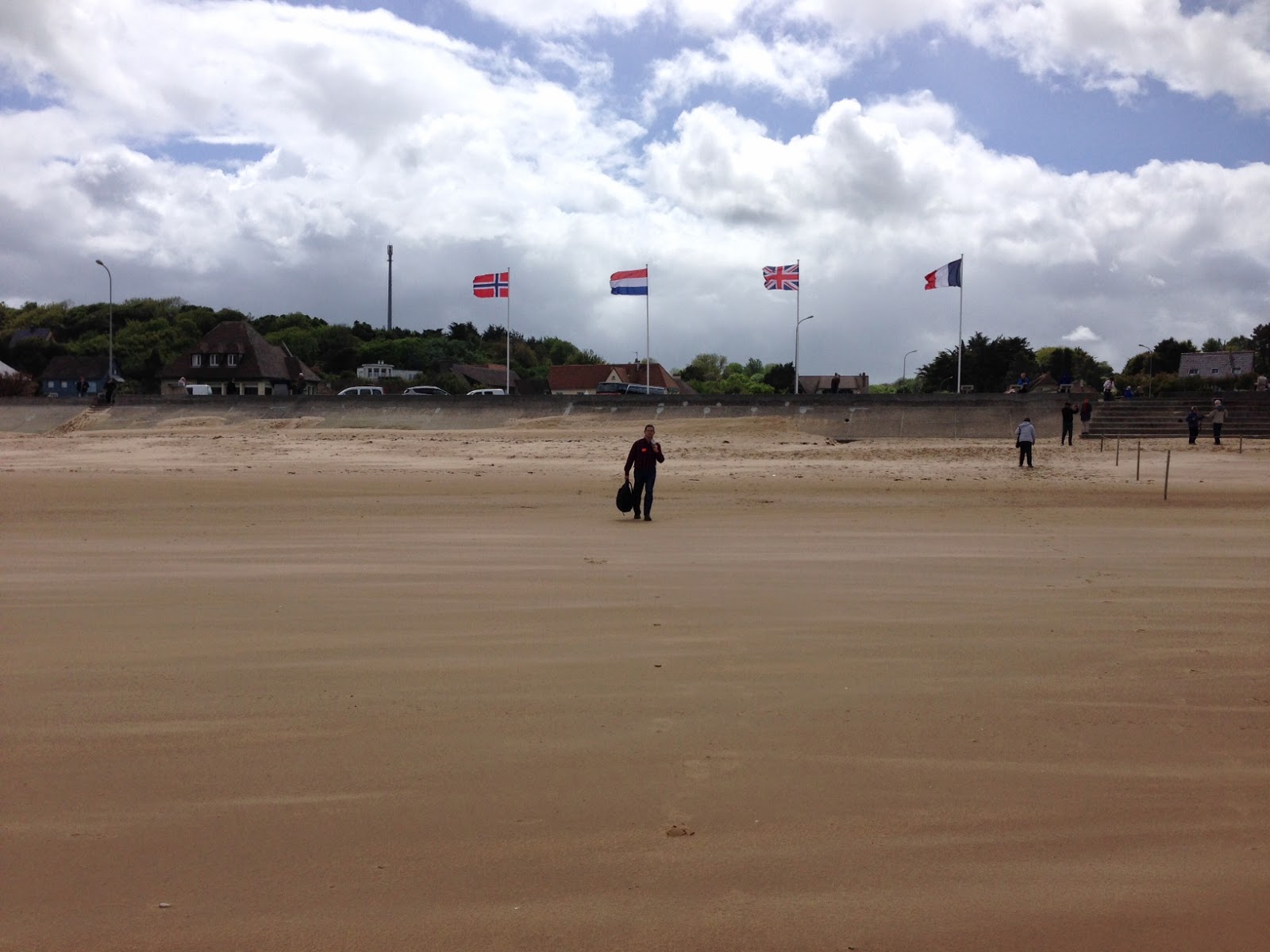 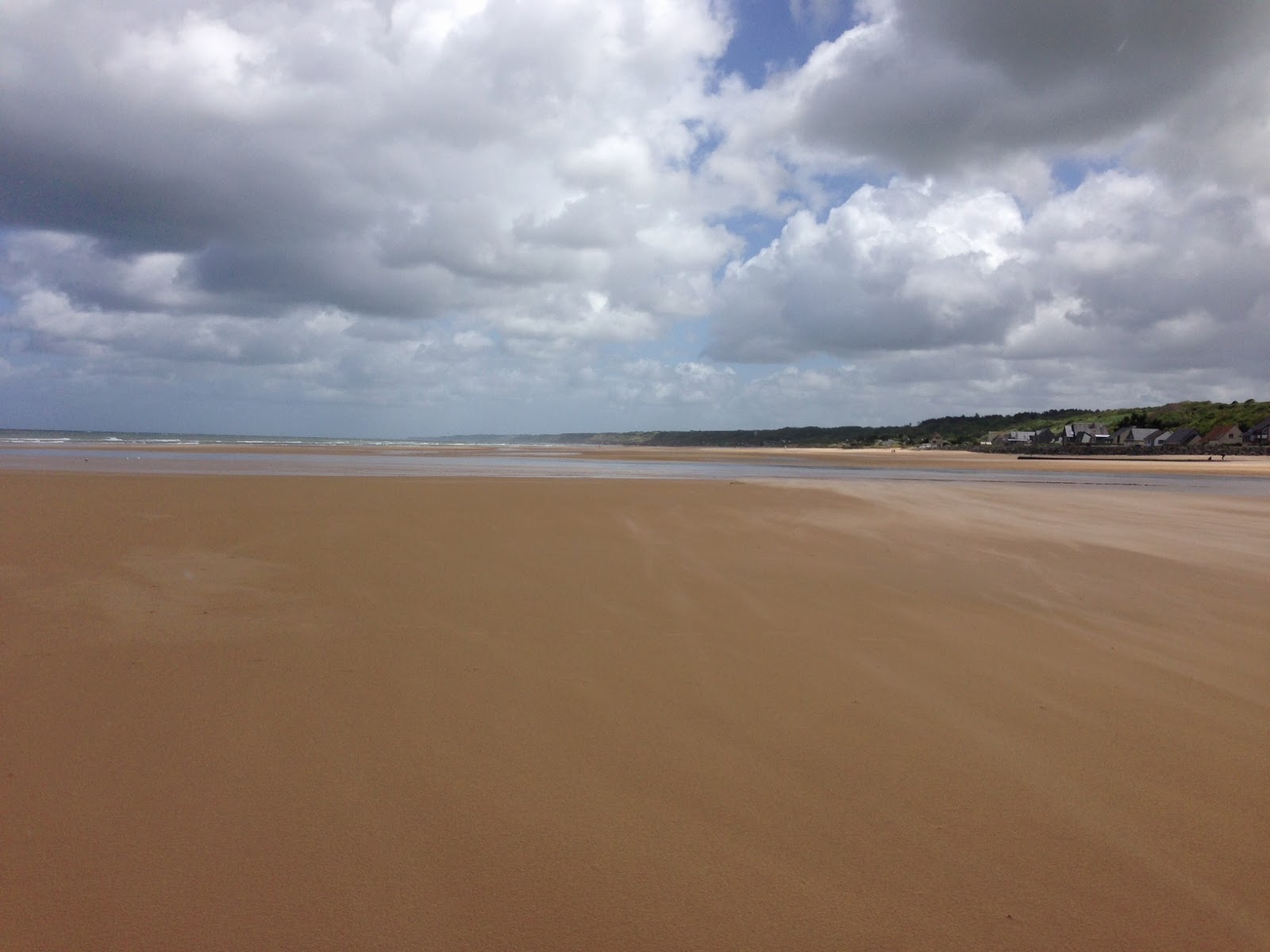 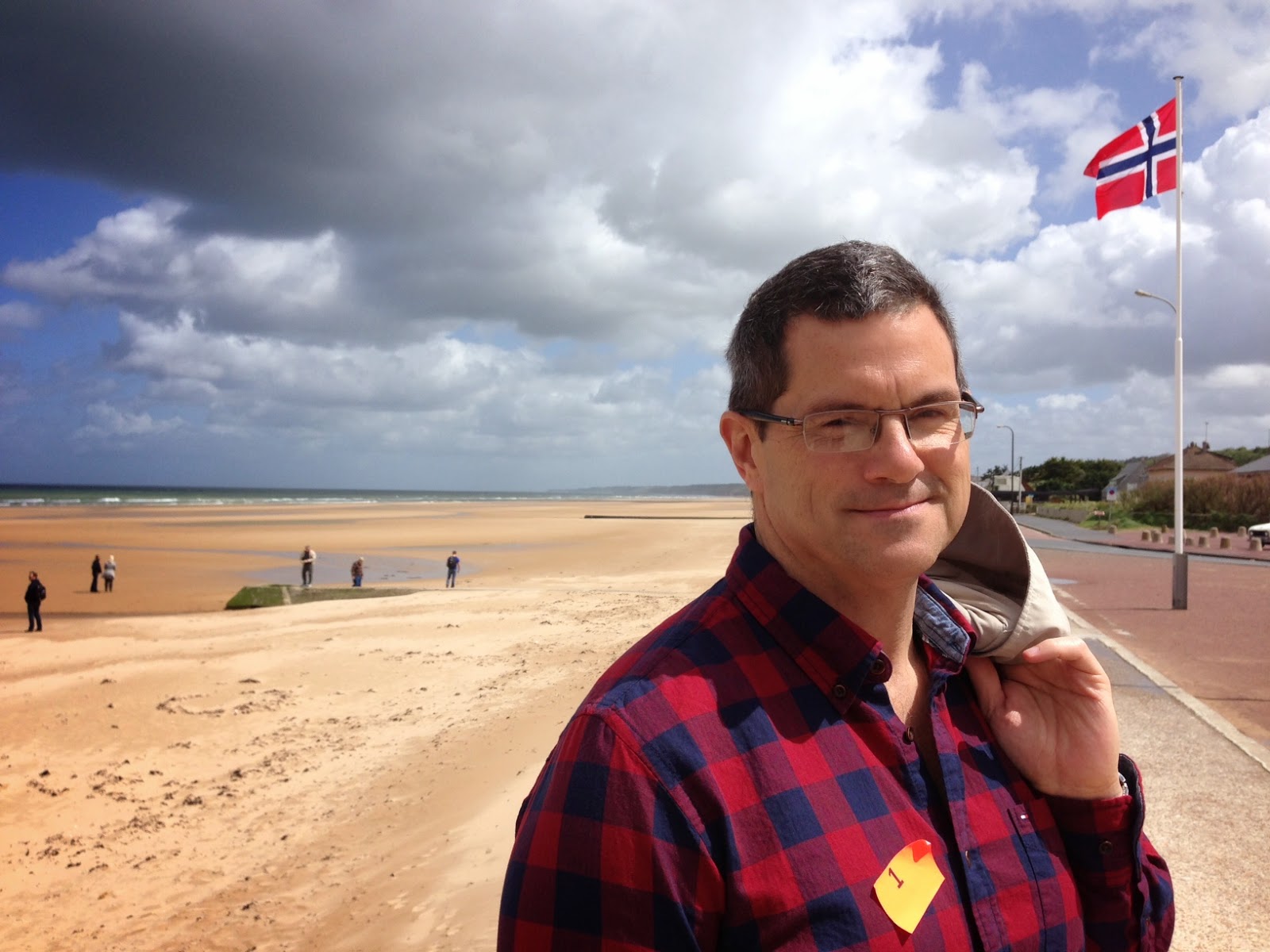 The next stop was the American Cemetery. Close to 10,000 American soldiers buried here; death dates we saw ranged from D-Day to January, 1945. Families were given the option of their dead soldier being buried here or flown back home, so those here are by choice of loved ones. 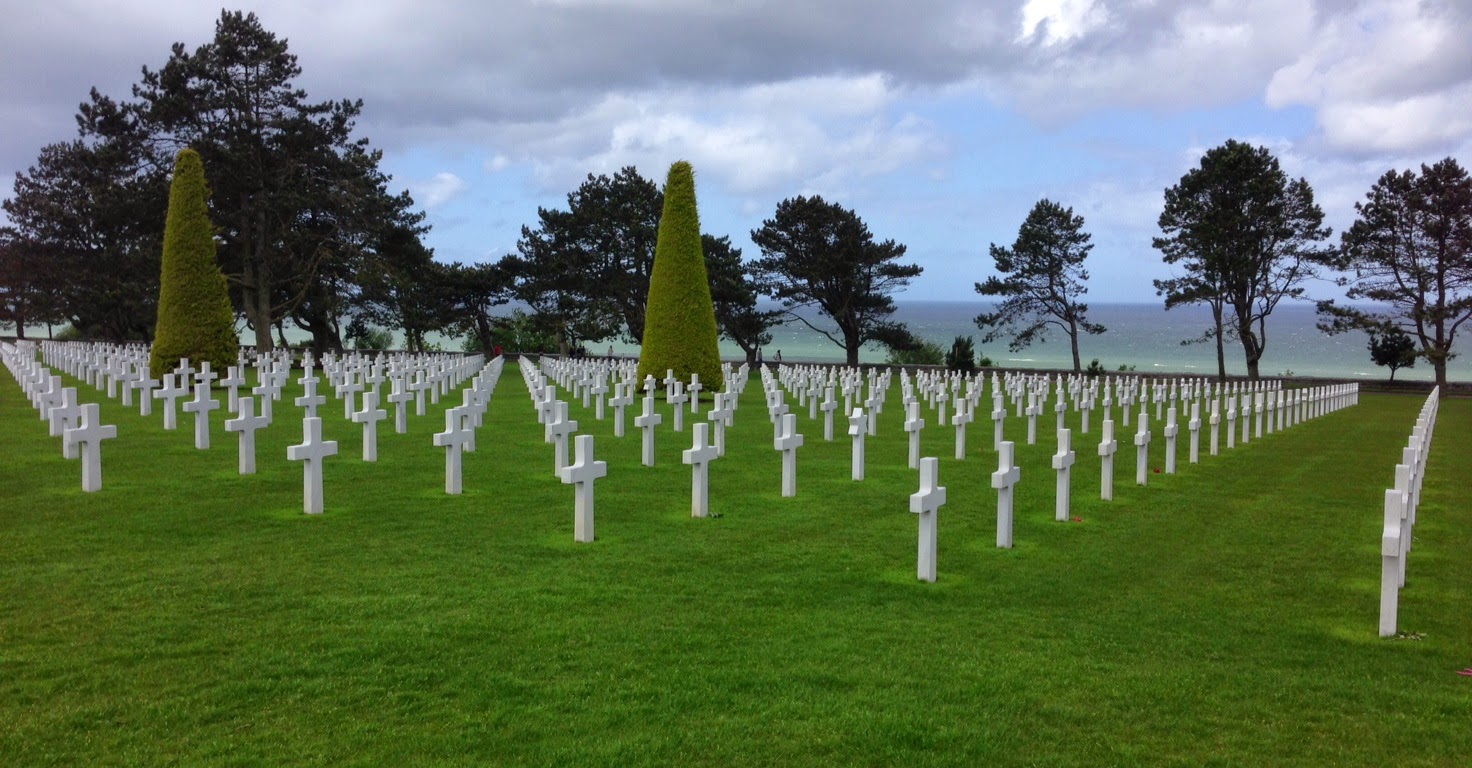 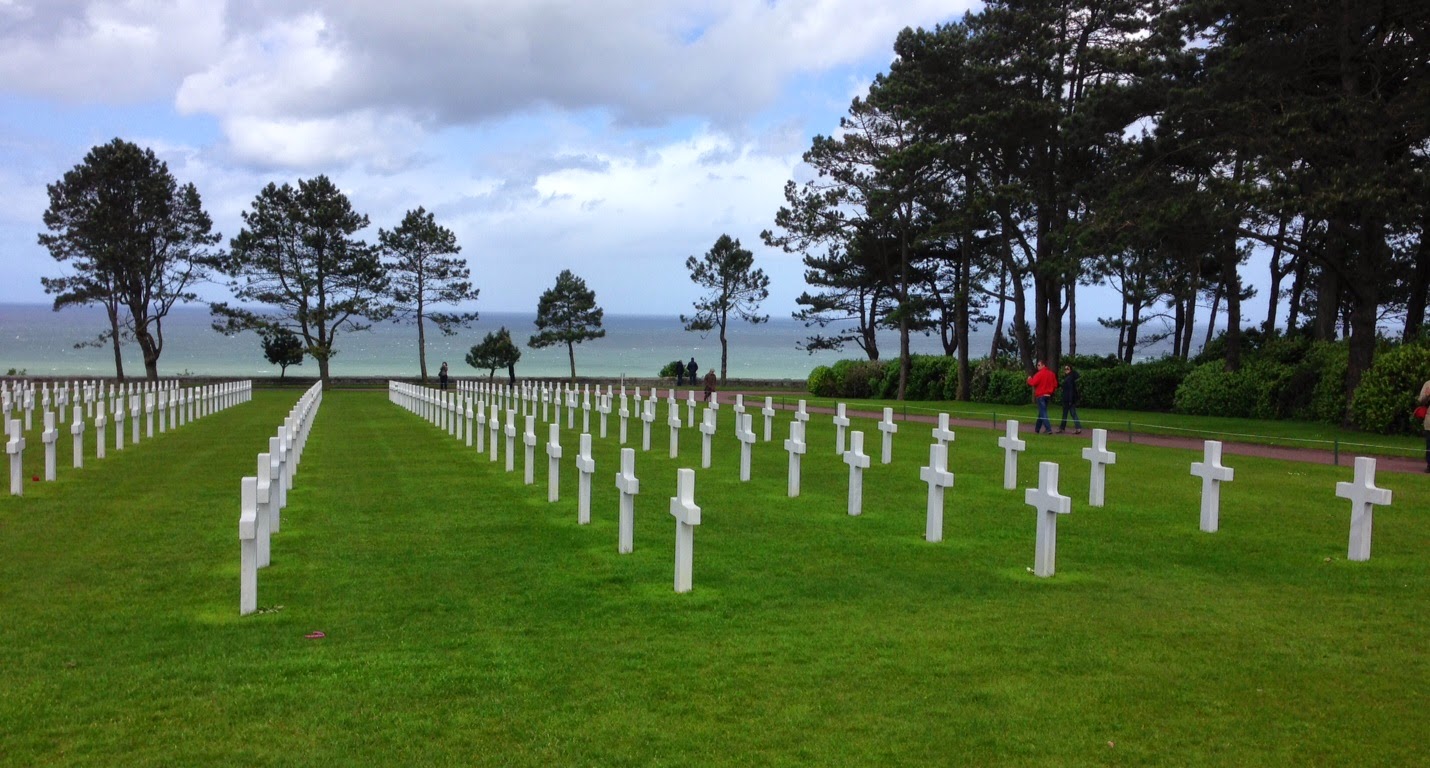 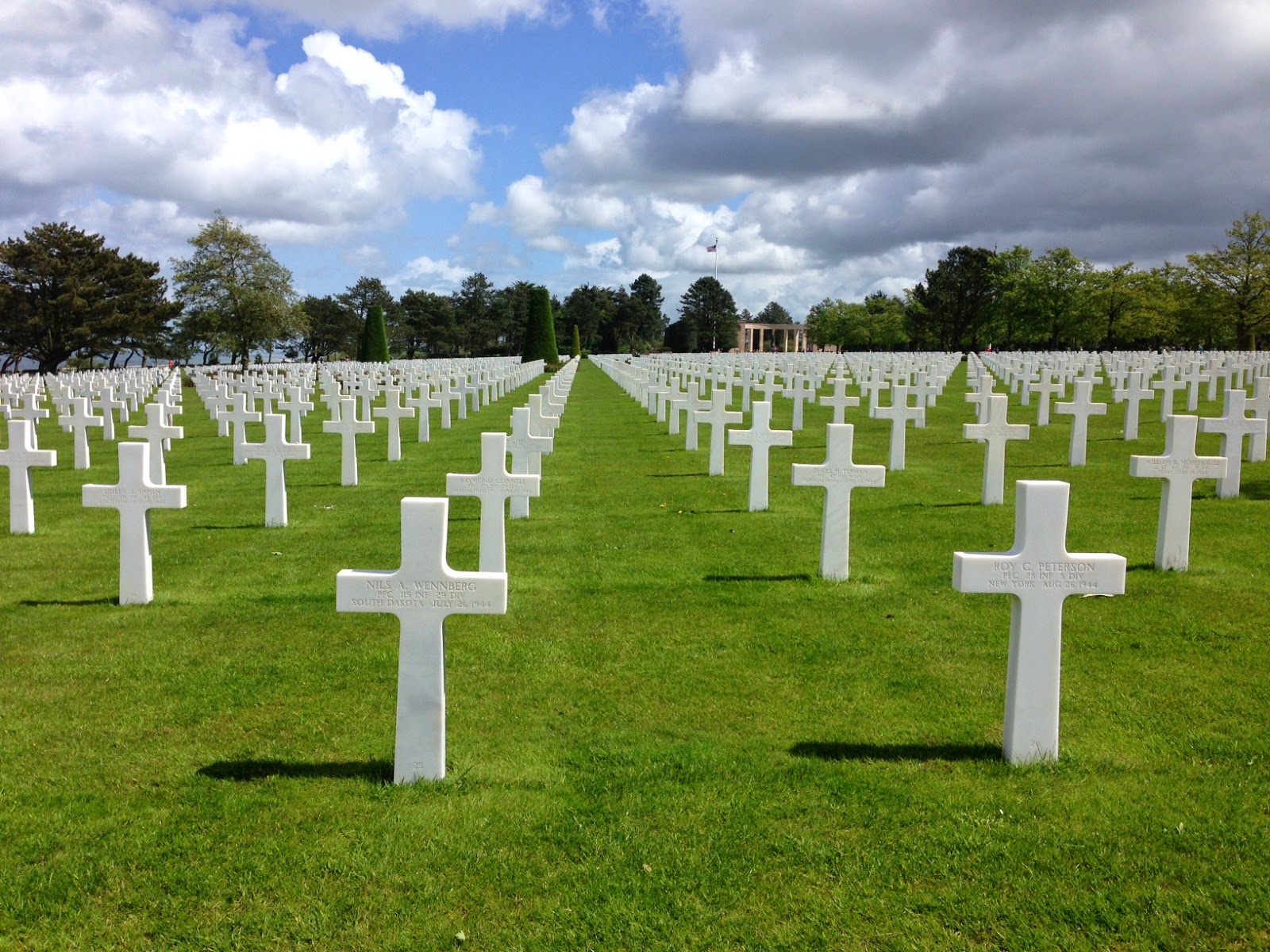 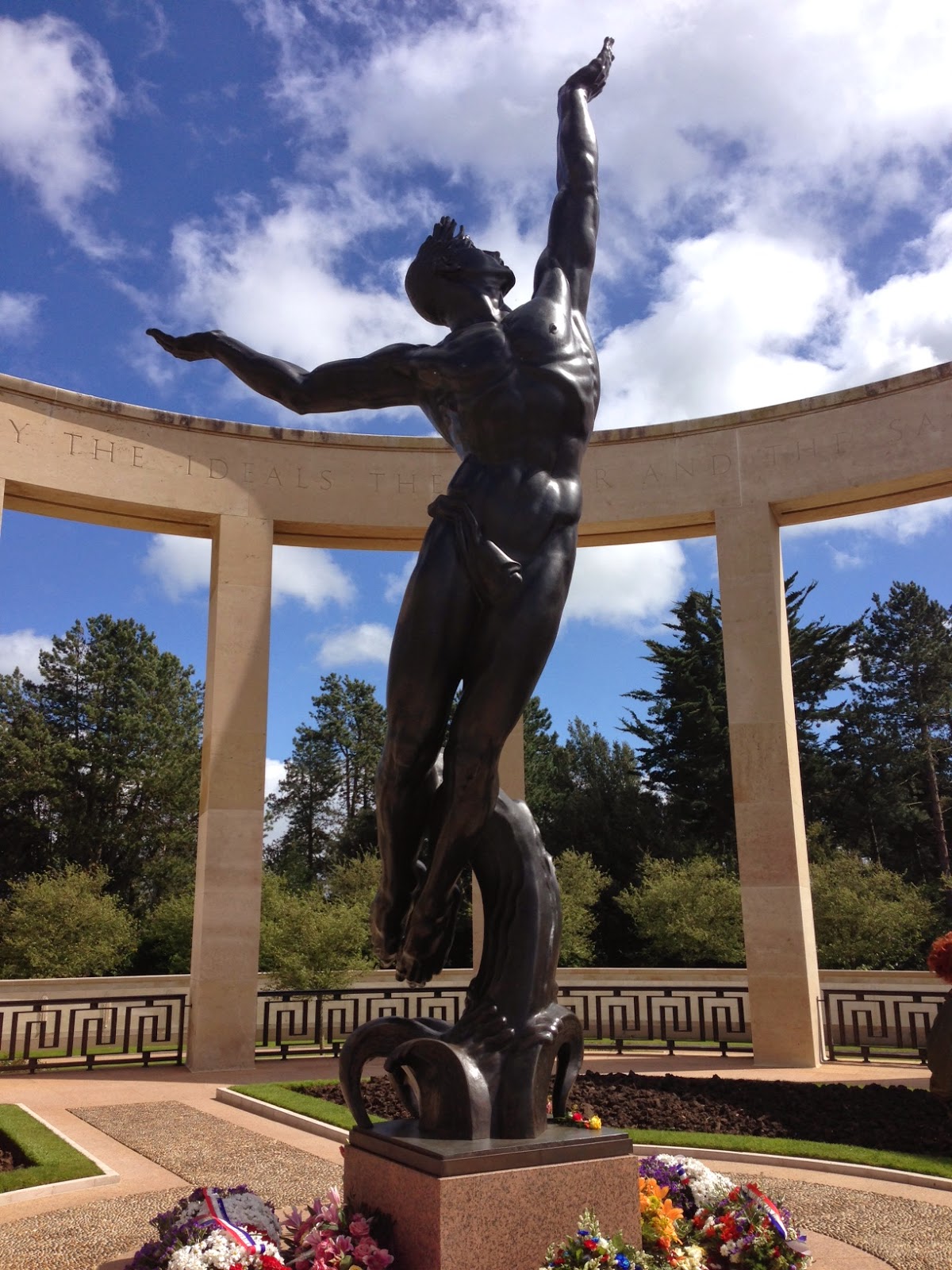 When I would talk about this trip before I left and people would ask me what I was looking forward to most, my immediate answer was always “Normandy.” I had high expectations and they were certainly met; probably exceeded since I didn’t expect to walk on Omaha Beach. The entire day was somber but in a good way. My fascination with WWII began with this random book I got on an Amazon Daily Kindle Deal for $.99. It was the biography of Dietrich Bonhoeffer, a German Lutheran Pastor who eventually became part of the Nazi resistance and was executed as a spy under Hitler’s personal orders, 3 weeks before Hitler killed himself. It was so detailed and, told from the German perspective, gave me my first solid understanding of how it all happened. That was in December, 2011. In April of 2012, Dan and I were in New Orleans and we stumbled across a WWII museum we didn’t know was there. It was Excellent. We would highly recommend it for anyone who’s in the neighborhood. It was very detailed, used a great mix of media, and was told from 3 angles: The European War, The Pacific War, and the War at Home. In a way it was the War At Home that really got to me: told a story of an America I barely recognized, where the entire country was united towards a single cause. It makes the petty politics we witness daily so disgusting. This museum in an odd way gave me an understanding of my parents that I didn’t have before. My mom was a teenager during the war, and had briefly told me stories about what it was like – rations, metal drives, etc. Dad served in the Pacific, Guadal Canal I believe. If he ever talked about it, I wasn’t listening. they were both dead at that point and it made me regret never asking them about it.

Since then, we’ve watched Ken Burns’ “The War”, a PBS series on Nazis, Band of Brothers, The Pacific. Last year in Amsterdam, we went to the Anne Frank House, The Jewish Museum, and The Dutch Resistance Museum. I’m currently reading a Churchill biography that is breathtaking in scope and detail. I’ve gotten more depth on the German perspective on this trip last week. When we’re in London next week. we’ll go to the Churchill War Room.

I’m on some kind of mission and don’t know why exactly. Maybe it’s some sort of living amends for missing the opportunity to talk to my parents about it while I could. Whatever it is, today was a big part of it, and I’m incredibly grateful we had the privilege.

And on a lighter note, this one is for Jon and Vicki 🙂 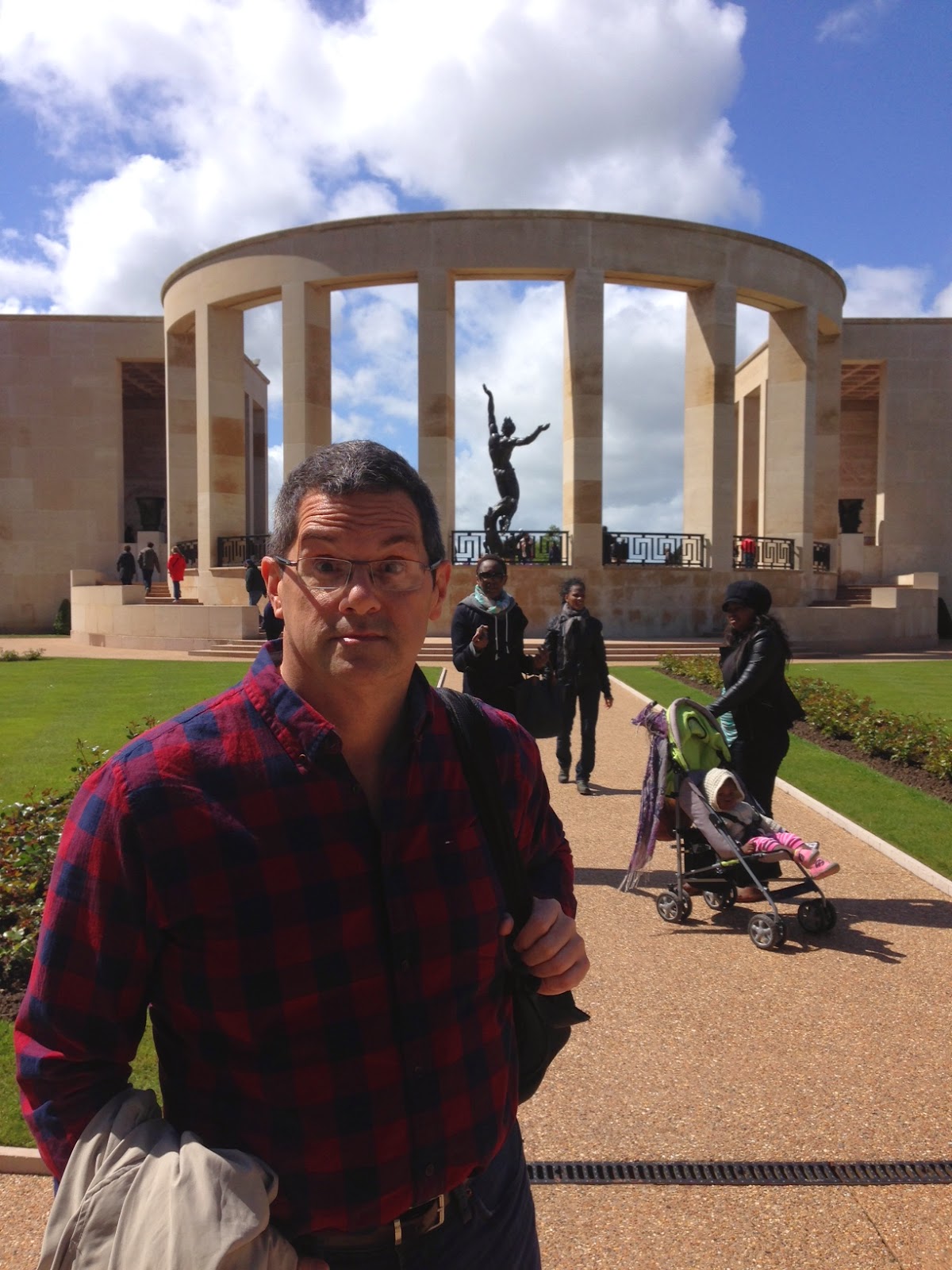 We got back to our drop site about 8:45pm. We walked back to the flat along a new route, which turned out to be apparently Paris’s version of Rodeo Drive – every high end designer you could imagine with ridiculously high prices. I’ll never understand fashion. I don’t care if we end up filthy rich somehow, I could never imagine spending $240 for a T-shirt, or $800 for a pair of shoes. Where do these people work, that’s what I want to know?

Our dinner was essentially the same as breakfast, moving through the groceries we purchased yesterday. Tomorrow is the first day since we got here that we don’t have to wake up to an alarm. Looking forward to a relaxing unscheduled day back in Paris. Eiffel Tower is on the list for sure, we’ll see what else we get to. Hopefully Dan is feeling better!