Turns out I didn’t get to do much today. Good thing I didn’t have anything specific planned. But the day started out great.

I slept decent and had a nice breakfast at the hotel. Via some junk email I just got from TripAdvisor, turns out the place I stayed at is the #1 spot in Trier on their list. So I’m not the only one who thought it was nice. I would definitely stay there again, but doubt I’ll be coming this way again any time soon. 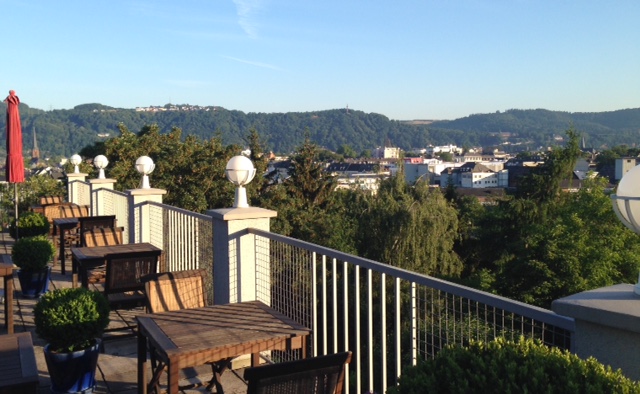 I could have had breakfast on the terrace but it was still 47 degrees at 6:45am this morning so I passed. The hotel literally sits on a cliff though so it’s a nice view of the Moselle Valley.
I checked out about 7:45 and had a few more things I wanted to see before I made my way to the train station. As I was walking to the first item, I passed what initially looked like a construction site. For some reason I took a closer look through the fence and realized it was an archeological dig. They are still finding ancient Roman stuff apparently. 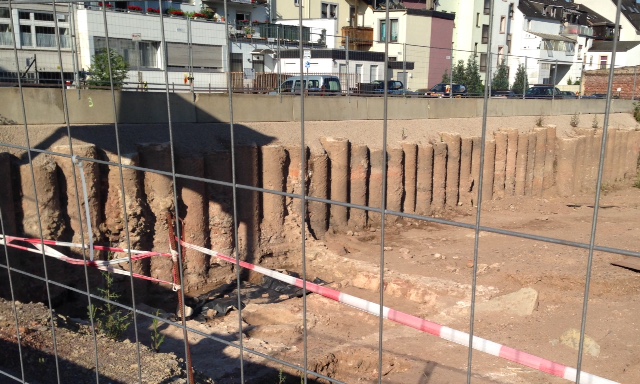 I wanted to see the Roman Bridge over the Moselle River. Its foundational pillars are over 1800 years old, and it was resurfaced in the 1200’s and 1800’s. No matter how you count it, that’s pretty sturdy construction. 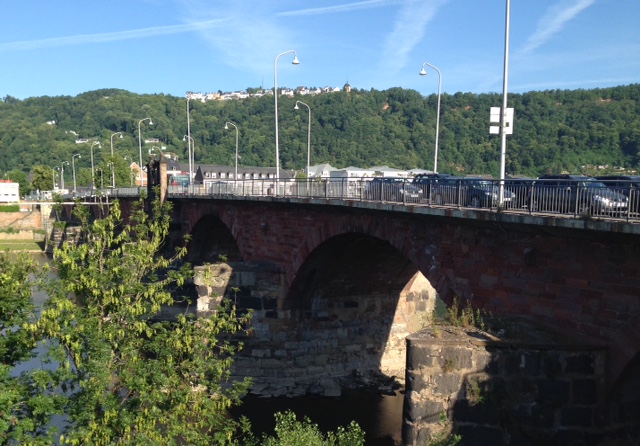 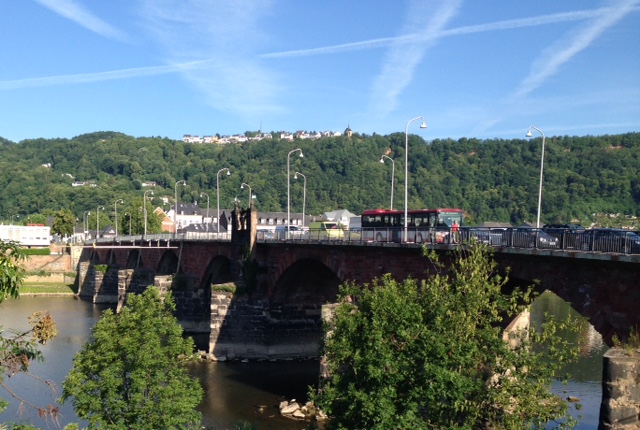 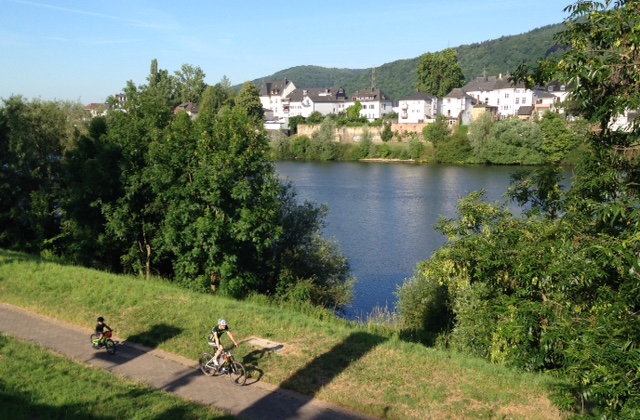 This was just to the left of where I was standing to take the bridge pictures. Sac folk: kinda reminds you of the American River Parkway, huh? 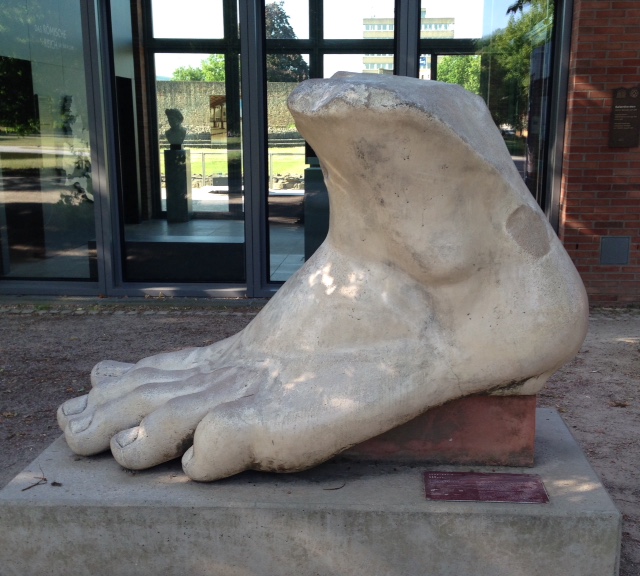 Missing a foot? I should’ve put mine on the base for perspective, but then probably couldn’t get the shot! This is 1.5 x 2 Meters – what’s left of what was a 12 Meter statue of Constantine. It’s sitting out in front of the entrance to the Imperial Baths. 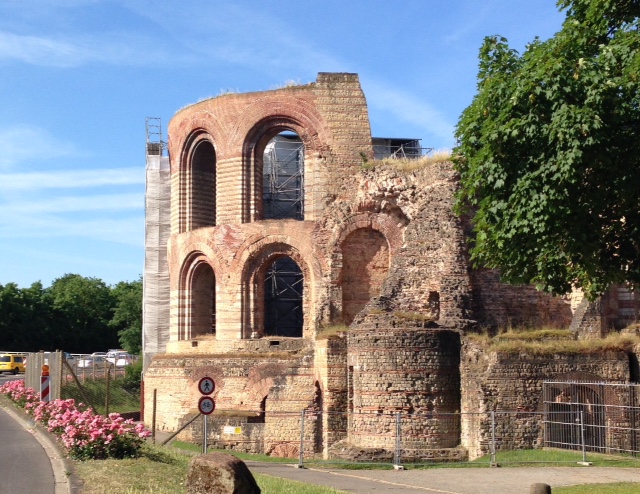 Roman baths were, oversimplified, huge public swimming pools. Unfortunately, there was so much restoration work going on right now I couldn’t really get a decent shot of anything on the inside. This is the outside wall.
Dan had done this Luxembourg/Trier combo one weekend when he was here earlier in the year, so this was really about me catching up while he was working. After he read my blog last night, he sent me an email saying “go to the Amphitheater before you leave.” It was on the way to the train station from the baths, so why not? It was also out of the city center and took me through some nice neighborhoods, so it was a really nice walk, and the Amphitheater itself was surprisingly fun. 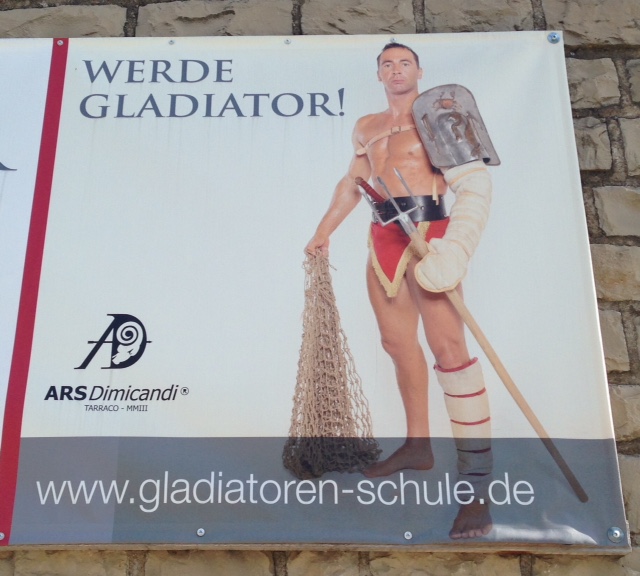 Wanna go to gladiator school? They’re serious – check out the website. Teaching it as a form of martial arts. 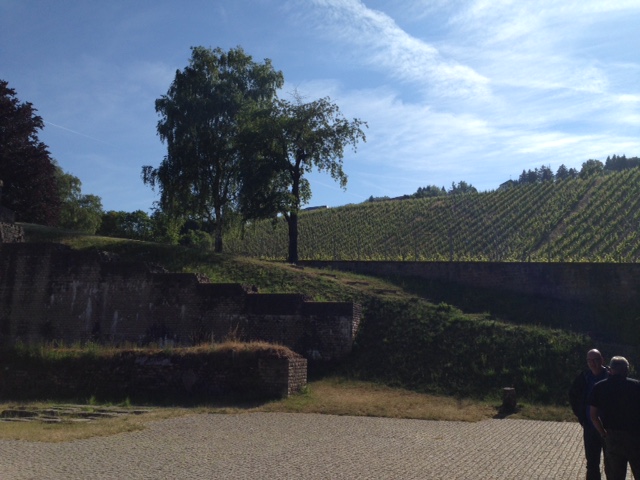 This was towards the entrance to the arena, but what I really loved were the grapevines in the background! 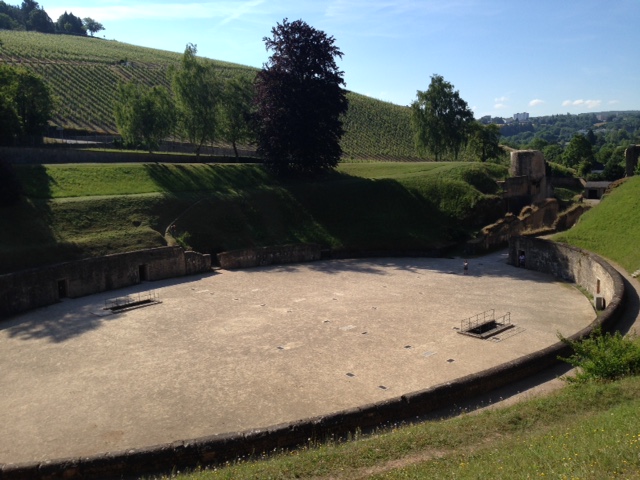 I’d already climbed around to the other side of the arena, trying to get out of the sun to get a decent shot. By then a woman had walked in, you can see her in the shadows, and gives you some perspective. 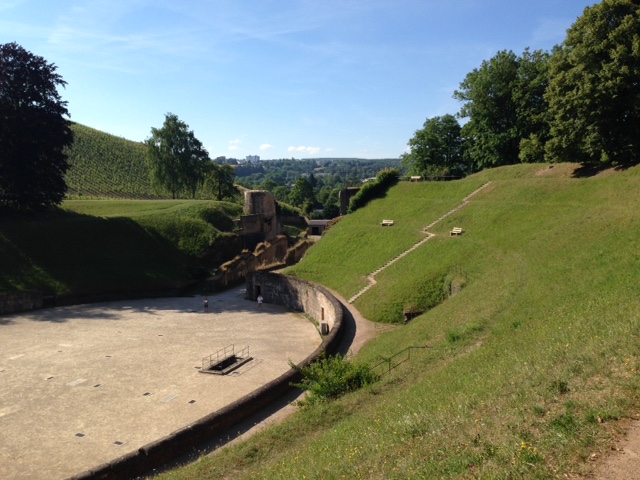 The arena was built around 160 AD and it’s estimated it would seat 20,000 people. After Trier fell out of power about the 4th century, the stones that lined the arena were removed and used in other construction. 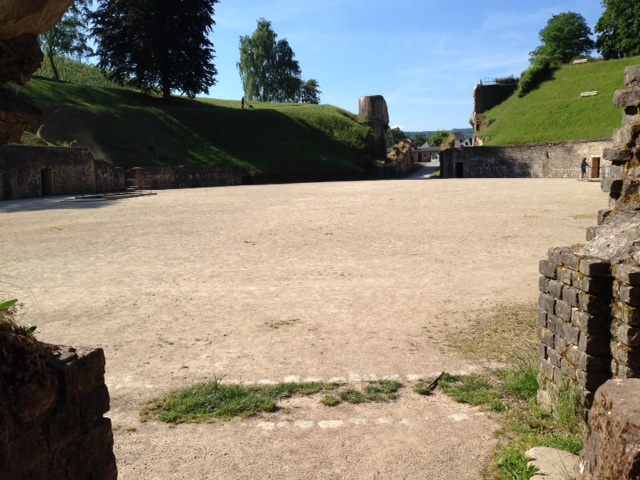 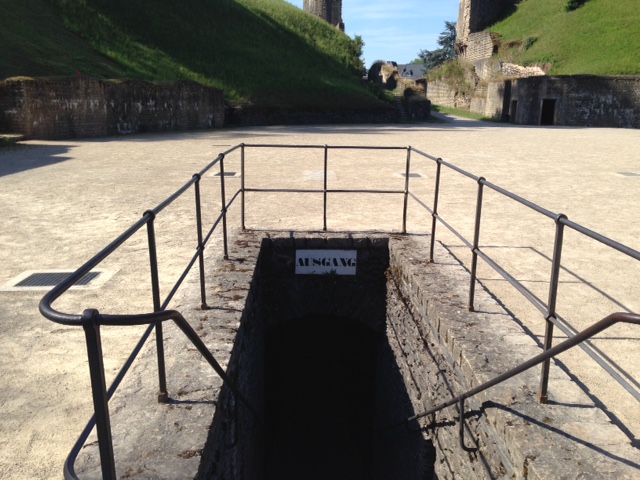 Everything was completely open and they just let you climb around and wander wherever. This leads down to….. 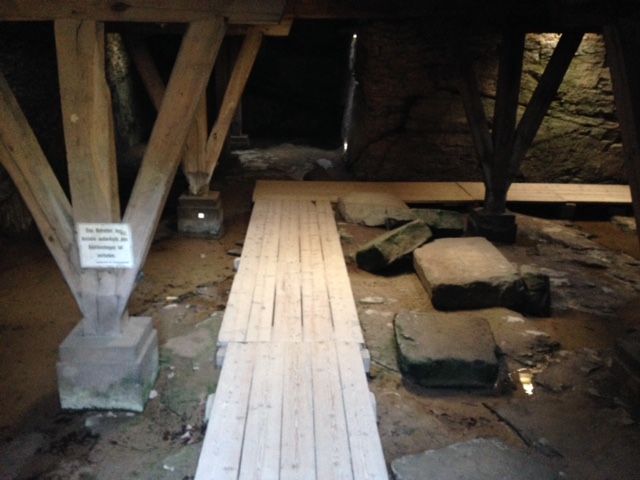 …here. It was a cellar, back in the day used for changing scenery, props, etc., during performances. Gladiator fights weren’t the only thing the arena was used for, also full on theater. I walked to the end of this walkway, took a right… 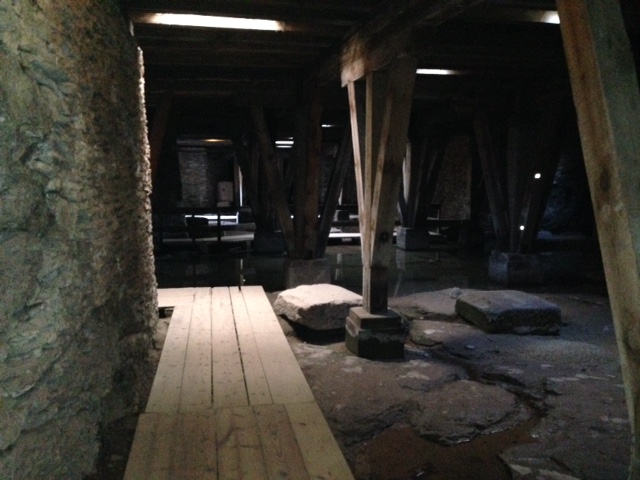 …and it just kept going. It ran the full width of the arena and there was another staircase on the other side leading back out. 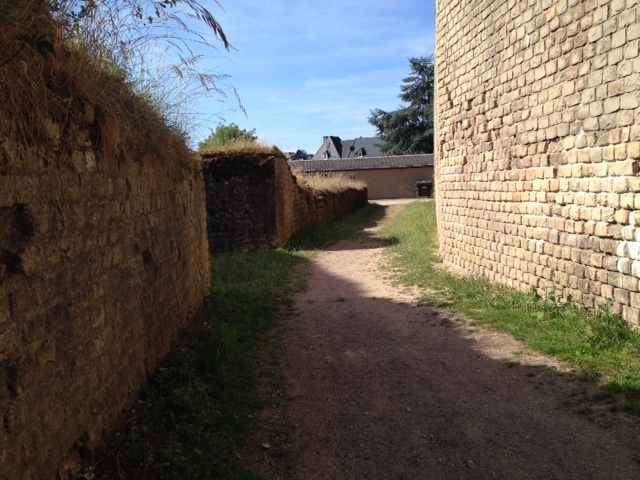 There was a pathway like this on either side of the arena entrance that lead to the seating areas. They were called vomitoriums because they would “spew out” people when the performances were over. Really.

I got a big kick out of this for some reason and was glad I went. There was lots of hiking to do all around it and it would have been easy to explore more, but I wanted to get to the train station to catch the 10:32, and it was about 9:50. I took a wrong turn I realized later than I should have, and then when approaching the train station, realized I was coming in the back way and had to figure out how to cross 12 tracks to get to the station. I found the pathway finally and you literally just walked across. I thought: this wouldn’t last long like this in America, because some idiot would get killed by a train, the railyards would get sued and suddenly there would be a bridge or something. But here I guess they trust you not to walk in front of moving trains. Imagine that.

As I laid my foot on the top step to the platform my train arrived, just in time! For all the good it did: about 30 minutes from my transfer point the train broke down. After sitting for more than 2 hours, they finally got going very slowly, and at the next stop we had to switch trains. When I got to Koblenz, the train to Cologne had just left and there wouldn’t be another for an hour. So I got out of the station and had a little lunch – currywurst – and made it back to catch the train to Cologne at 3:30. I finally got back to the room about 5:15. Literally the entire afternoon gone – had things gone as planned, I would have been back about 1pm. Oh well. It was pretty comfortable on the train and I read a lot. I know my legs appreciated the rest after the beating I gave them Monday and Tuesday.

I did some packing and took a shower, and grabbed a few pictures of our room at the Hilton. 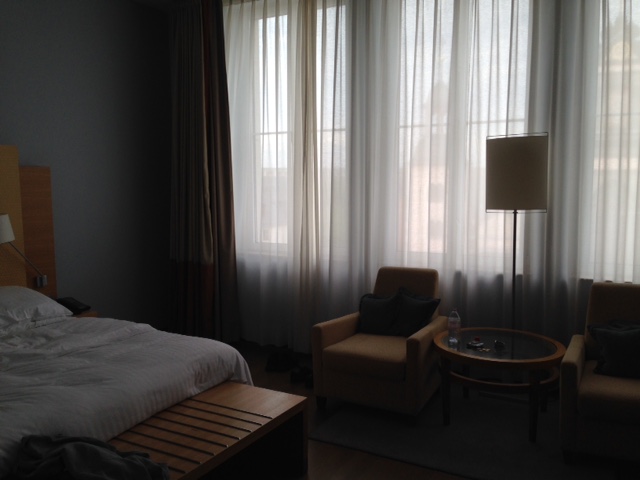 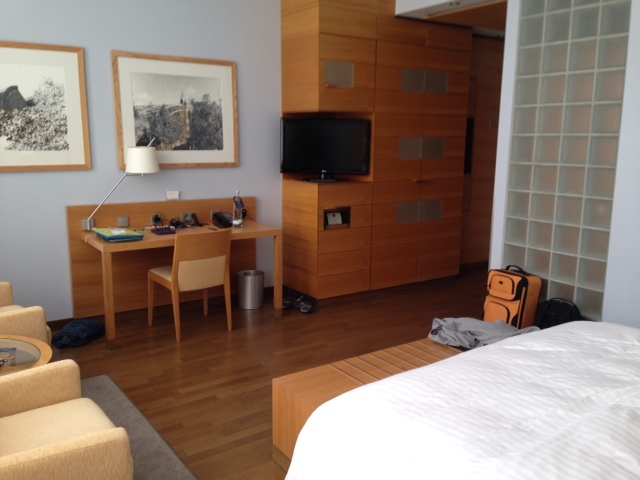 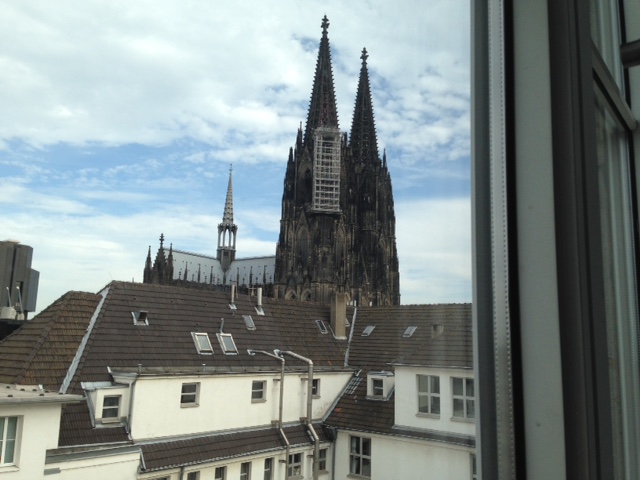 At the right angle, you can see the cathedral.

Dan got in from work around 6pm. We planned some of the logistics for tomorrow then decided to go out for Turkish food for dinner. We discovered a little Turkish neighborhood on the opposite side of the train station. We haven’t ventured to that side since we were here first in 2013. It was a great little neighborhood, and the restaurant was packed with locals so we figured we were in for something authentic. And we were. Loved the food. 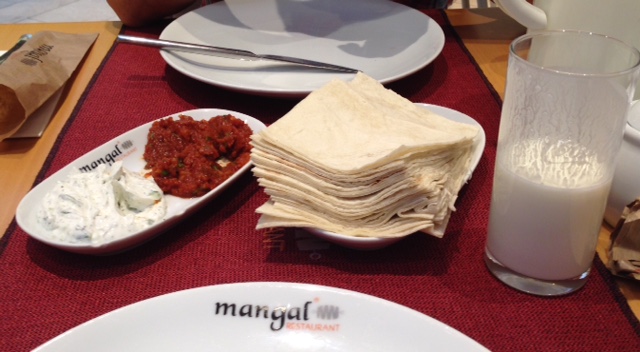 Their version of chips and salsa: brought to every table, tortilla like pieces of bread, with a hot sauce or a yogurt sauce to spread on them before you roll them up. And we got a full pitcher of a yogurt drink that was pretty good. It was odd at first – a salty yogurt – but it grew on you. And very filling. 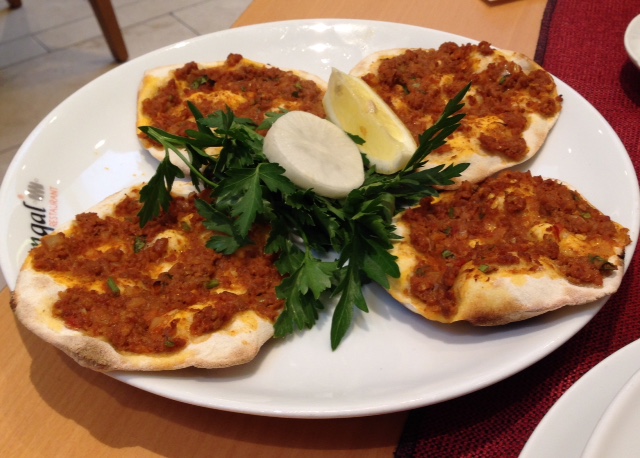 They called them mini pizzas. Pretty tasty – spicy hamburger ground very finely on a crisp pita bread, or something close to it. That was it. Simple and good. 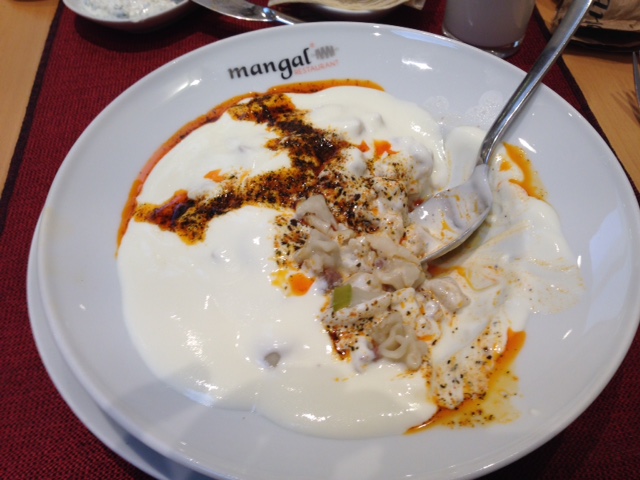 Dan took a spoonful before I remembered to take a shot, but that was probably better: Turkish tortellini – small pieces of pasta with little bits of beef in a nice sauce, and slathered with yogurt on top. All you saw when they brought the dish was the white blanket of yogurt with some of the brown and orange sauce. We were like “what the hell did I order?” There were no descriptions of the food on the menu, we were going just by title. 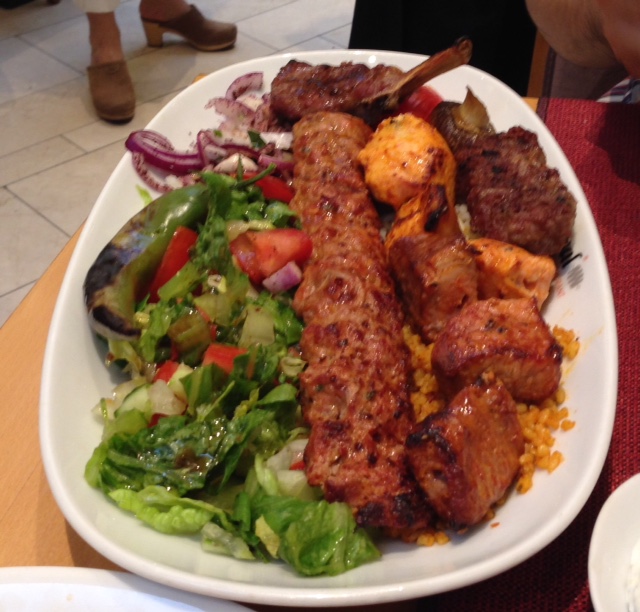 Dan got the mixed grill, which included beef, chicken and lamb 2 ways, with rice and salad. It was all pretty dang tasty. (Although I’m still not crazy about lamb.) 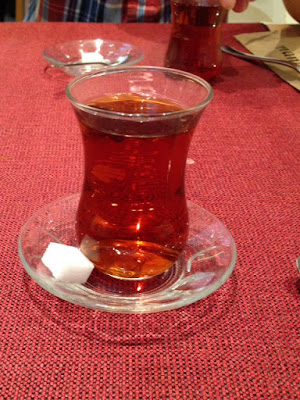 A glass of hot tea provided at the end. 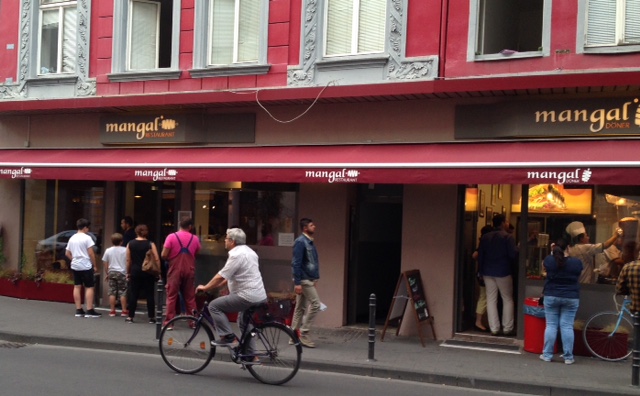 This was the place, Mangal. This neighborhood reminded me more of Amsterdam than anything – there were lots of different ethnic areas in that city and this had that same feel – down to almost getting run over by bicyclists as we crossed the street. 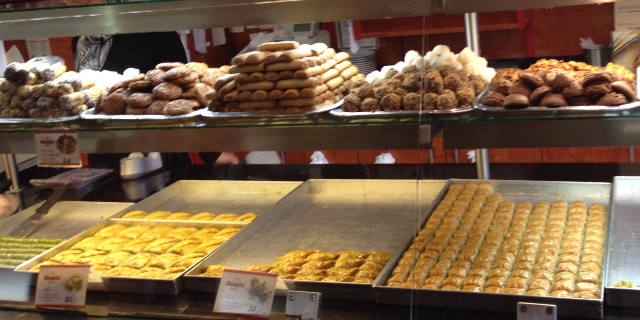 On the way back we passed a little bakery specializing in baklava, of course. We were pretty full at the time but brought some back to the room for some late night goodies. Just had a few bites – pretty tasty. 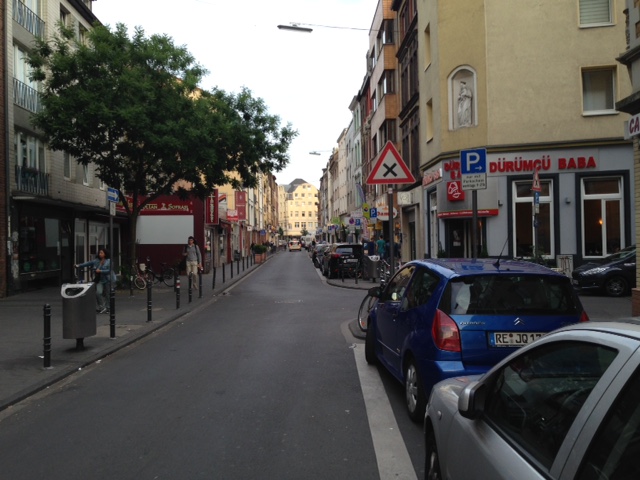 And that was the day. Not much to it. Dan goes to work tomorrow morning, I’m not sure what I’m doing yet but will find something to do in Cologne. We’re meeting at the Dusseldorf airport around 2pm. Tomorrow night we’ll be in Barcelona.

0 thoughts on “Day 3: Trier, Part 2; a Turkish neighborhood in Cologne”