I was up by 6am this morning and did the writing part of the blog from yesterday. I was unusually tired last night so just didn’t fight it. It was much easier to do it fresh over coffee. I am definitely a morning person. We were back from our day today earlier than ever, about 7:30pm, on purpose. We have to leave by 8am tomorrow to catch our train to London and just wanted an easy evening. We picked up some breaded fried fish and mushrooms at a “take away” place on our block and brought that back for dinner. As I type Dan is watching TV, flipping back and forth between X-Men and Star Wars as commercials come on!

We needed to pack again, too. Although we were only here 3 nights, the laundry process sort of required that we unpack everything. Glad that’s done though, we should be good with clean clothes until we get home.

Dan was up by 8am or so. For breakfast we had scrambled eggs and his steak pie from last night that he had barely touched. We packed what food was left in the flat – yogurt, the granola cookies, and a bag of chips – and headed to the meeting place for our last minute adventure.

When we were walking the Royal Mile Friday evening we came across several tour companies offering day trips into the countryside. We picked up one of the brochures and discussed some options at length over dinner. Do we or don’t we first of all? There was plenty to do in Edinburgh, we had 2 pretty full days planned, but the idea of a country drive was appealing and the pricing extremely reasonable. (Especially considering what we paid for Normandy – and we had gone with one of the less expensive options in that case…) When we got back from dinner Dan did some further research and found one on TripAdvisor that had rave reviews and that only did “small group” tours – no more than 16 people. For the same pricing as the larger tours. So we looked at the options and booked one. And redid our plans for Saturday to carefully pick what we were going to do since we suddenly had only 1 day to do it in.

The tour met at a coffee shop in New Town, about a 15 minute walk from us. We were there at the required time, 9:15, and boarded as scheduled right at 9:30. There were only 9 people on the tour – another American, Carissa the vet from Maine, 2 men from Germany, 2 girls originally from China and Taiwan but living in London as students, a guy from Spain, and 2 employees of the touring company – Rabbie’s – in training. The guide’s name was Barney (and the county across the firth is the county of Fife – go figure), he grew up in the south area of Scotland but went to school at U of E, majored in history. He was funny, articulate, full of knowledge, well traveled, and well read. It made all the difference in the world. He shared all kinds of things – both historical and current events – throughout the day and only once did someone ask a question he couldn’t answer. (It was Dan of course!)

It was about an hour’s drive to our first stop and he told in elaborate detail the real story of Braveheart, which actually had little to do with William Wallace. The historical perspective in the movie was “rubbish” although they did get a few things right. But not much according to Barney. Here’s what I remember but don’t quote me:

On the way home, Barney finally clarified what has always been so confusing to me, come to find out because their nomenclature is the reverse of ours. Great Britain, AKA United Kingdom, they refer to as a state which includes the countries of England, Scotland, Northern Ireland and Wales. England and Scotland have been a unified country – United Kingdom of Great Britain – since 1707. When Queen Elizabeth I died in 1603 without an heir, she had named a distant cousin as her successor – James VI, King of Scots, became James I of England. This is the same James of King James Bible fame. For the next hundred years, the monarchy ruled both countries, until Queen Anne got both Parliaments to unite them formally in 1707. They’ve been together ever since. 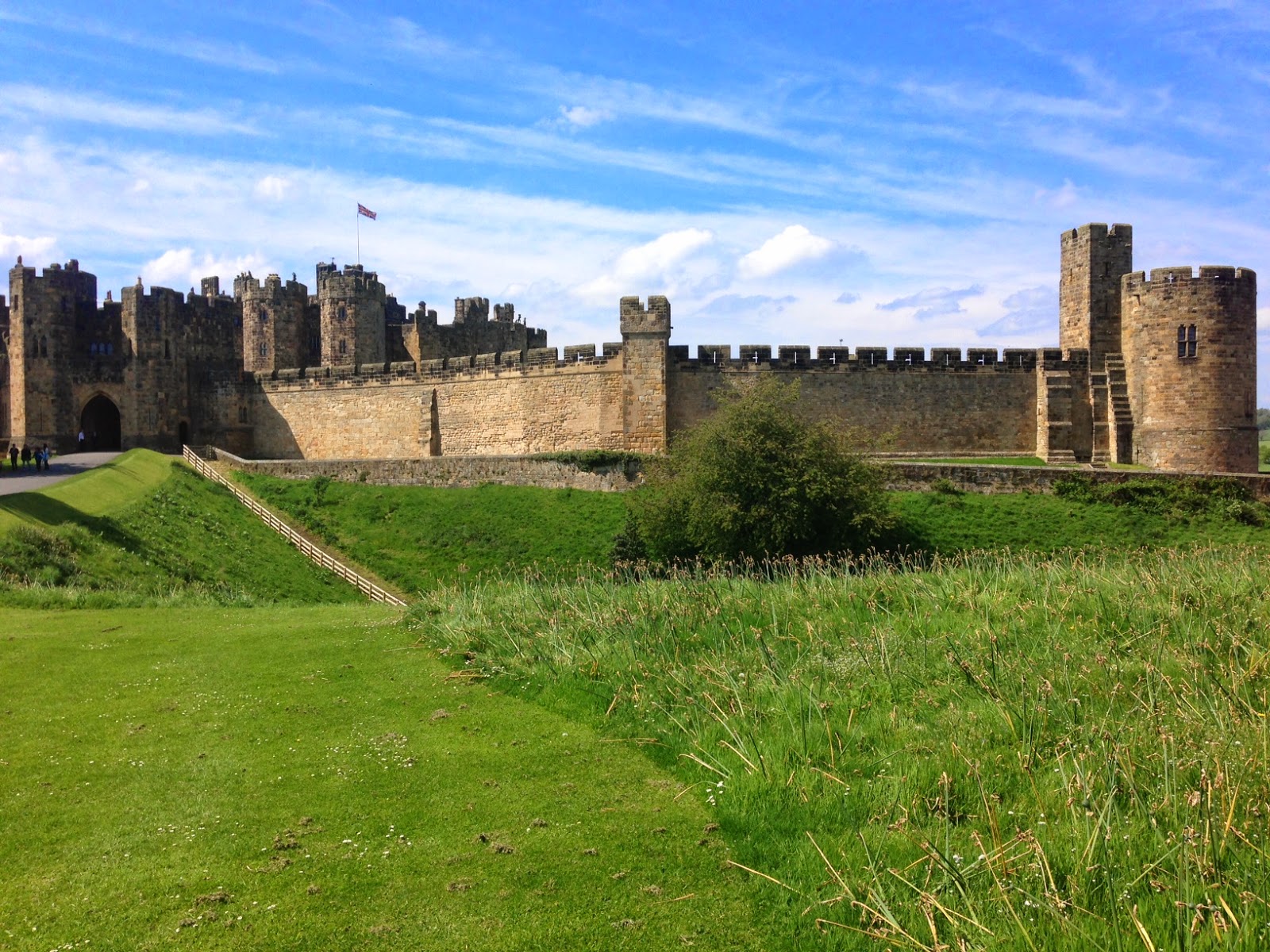 Alnwick Castle is one of only two castles in England that are both occupied and at times open the public. The other one is Windsor Castle outside of London, home of the monarchy. Alnwick Castle is the ancestral home of the Perry family of Northumberland County where they have lived without a break in heritage for over 700 years. The first heads of the estate were Earls. In 1766, the Earl at that time had great political influence and was made the 1st Duke of Northumberland. The current residents are the 12th Duke of Northumberland, Ralph Percy, and his wife Jane. I guess that makes her Duchess. They raised 4 children here, currently aged 24-30. Their two daughters were both married in the castle.  They own several other castles in northern England and Southern Scotland. They live here for 6 months a year, and open it to the public while away as revenue for its hefty upkeep.

Before we went in, we ate the picnic items we’d packed on a picnic table on the lawn in front of the castle.

The inside was at times just as elaborate as Versailles, although perhaps more tastefully done. There were two large chests in one room that had actually been in Versailles and were purchased by the Duke at the time. That Duchess – I believe it was the first one – had actually attended the wedding of Marie-Antoinette and Louis XVI. The first Duke was actually a Smithson – he married the daughter of the prior Earl who was a Percy and he took the Percy name to preserve the heritage. He had an illegitimate son who achieved success without any help from his wealthy father as a chemist and mineralogist. The soon took the name James Smithson. When he died, his will stipulated that his estate be donated to the founding of an educational institution in Washington DC, even though he had never been to the US. This became the Smithsonian Institution.

The docents in the castle – there was one in each room – were extremely friendly and knowledgeable, and loved talking about the castle, its furnishings and the family history.

There was also something about the interior that was more intimate, despite the lavish art and furnishings: an HDTV in the library; family photographs, some very recent, throughout. It was clear someone lived there.

We had time for a quick walk through the town of Alnwick after we left the castle and picked up a snack to eat on the bus. We made a stop on the way home in the little town Barney grew up in, Berwick-upon-Tweed. It is the northernmost town in England. The water in the background is the River Tweed as it flows into the North Sea. 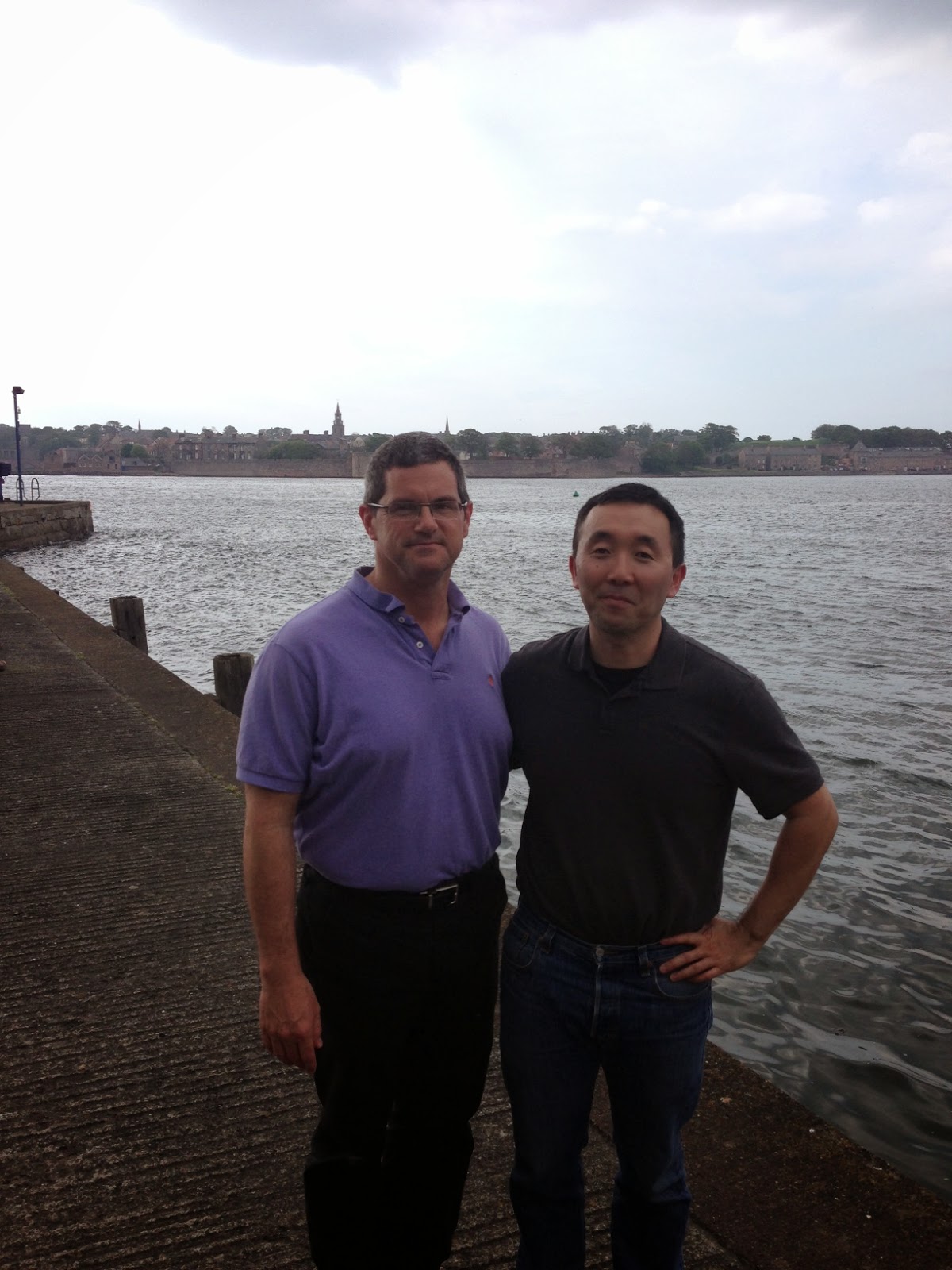 It was a really lovely day, we both enjoyed it a lot.