I slept for 6.5 hours, waking up about 5:30am local time. That’s pretty normal for me in terms of length and time up; although here lately it’s actually kinda sleepin’ in! Yay for vacation. It’s also a nice indicator that my strategy of staying awake as much as I could on the way over helped me adjust to a 9 hour time difference pretty quick. We’ll see if it sticks.

Dan, on the other hand, did not sleep as well. He was up and ready to go by the time I woke up and left about 6am; he’d been up since 3:30am. He had to work in Frankfurt today, which is about 1.25 hours away on a high speed train. He had a long day – didn’t get back until close to 9pm. Hopefully he will sleep better tonight.

I started my day – where else? – at the train station. The room we’re in doesn’t have coffee in it (despite supposedly being a 4-start hotel) so I was out by about 6:30 in search of. Nothing else is really open that early and I knew stuff at the train station would be. I went to Kamp’s which is one of 2 German bakery chains we’ve identified. Had 2 cups of coffee and a croissant there. I managed to get this shot from inside the station which helps depict the mall aspect that I mentioned yesterday. That’s Kamp’s where I sat and read some of my Churchill book, with The Body Shop on the other side. The Body Shop is somehow ubiquitous here – I must’ve seen 4 of them walking around today, which is certainly more than I see at home. What’s up with that? 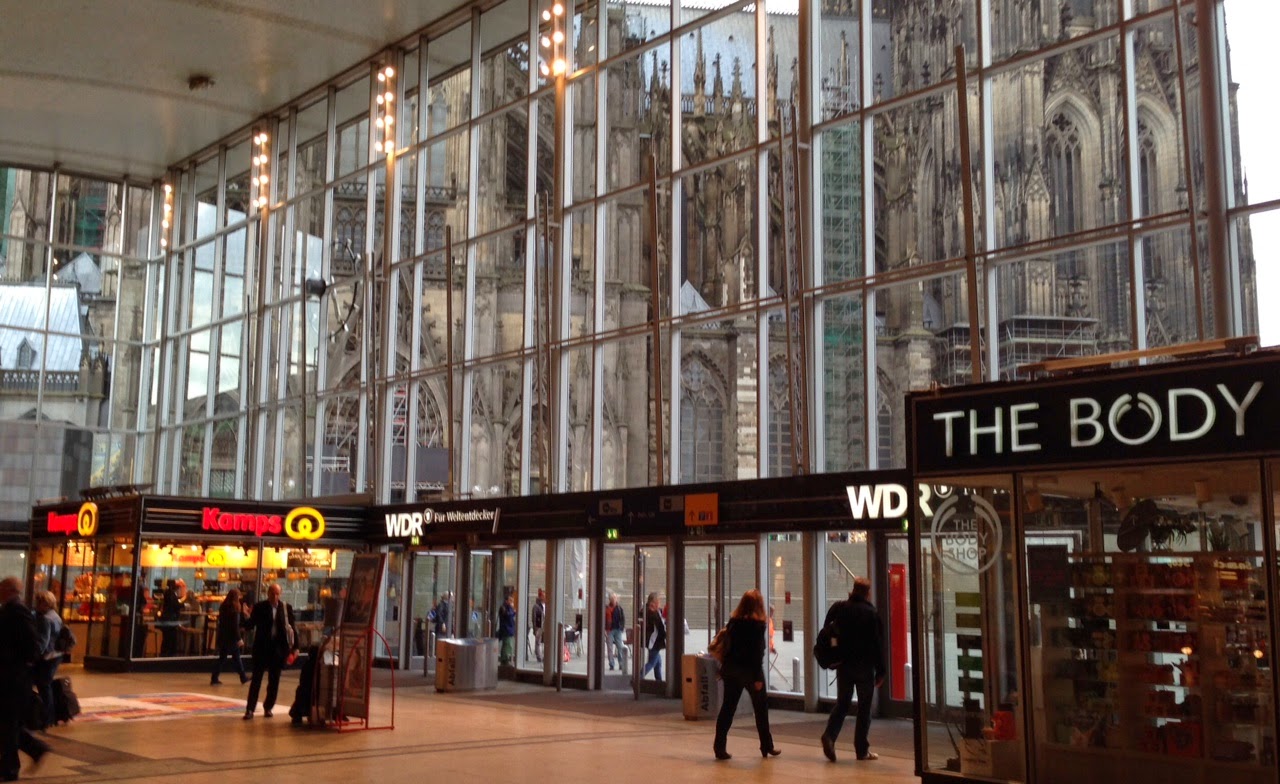 And yes, that’s the cathedral in the background. I love the juxtaposition of campy retail (no pun intended) and Gothic architecture.

I went back to the room and planned my day using TripAdvisor.com. First stop was the Hohenzollern Bridge. Originally built in 1907 for trains, cars and pedestrians, it was destroyed in WWII and rebuilt in 1946 as a train bridge only. Pedestrians were allowed again some years later. Today it is the busiest train bridge in Germany, serving about 1200 trains a day. The Cologne Train Station is a major transfer point for all European railways. Part of the reason we’re staying here instead of Dusseldorf is the direct line from here to Paris, which we’ll take on Saturday. 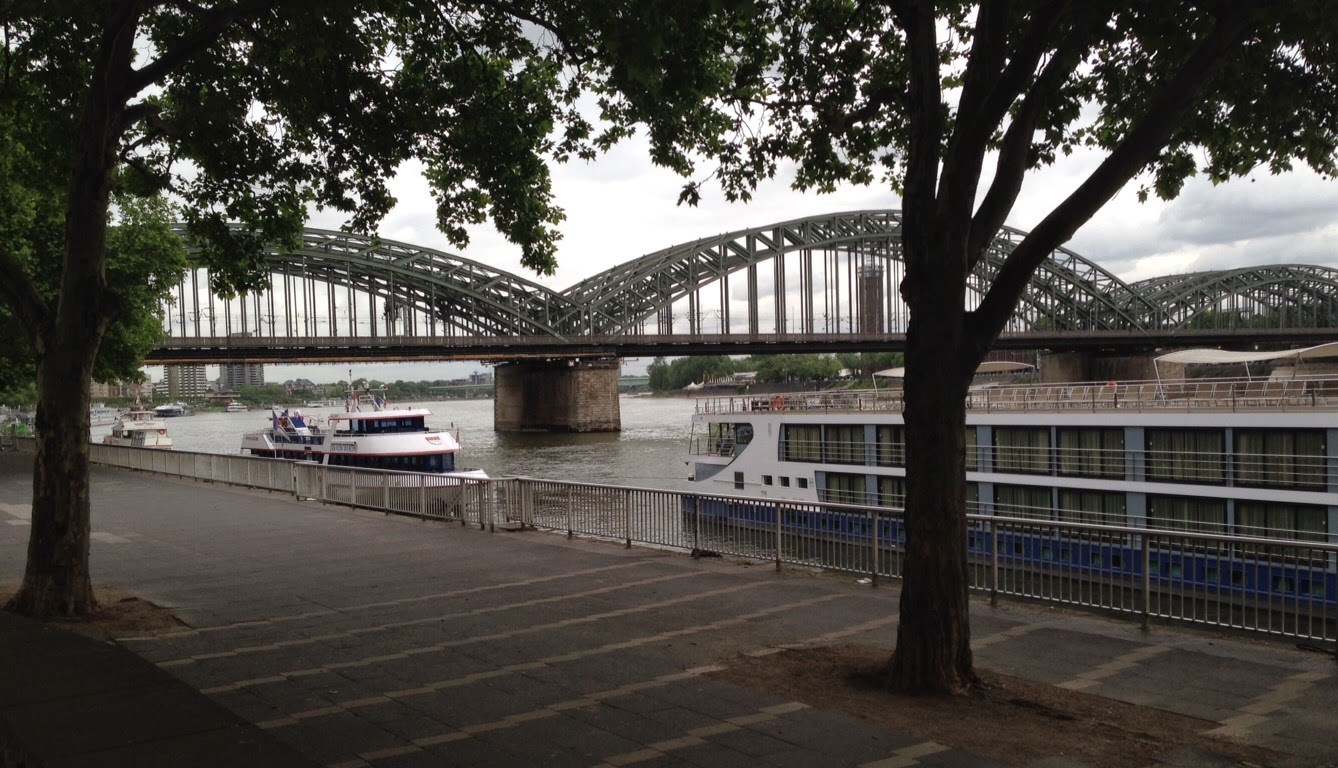 The fence separating the pedestrian walk from the tracks is covered in “love locks”: couples put a padlock on the fence, with names and dates written or inscribed on them, and throw the key in the river as a commitment of undying love. I understand Paris has one, too, so we’ll get to compare them when we go there! Across the river was a business building I’d seen in the train yesterday and thought it was cool looking. I learned on TripAdvisor that it is called KoelnTriangle and has an observation deck on the 29th floor.

Who doesn’t like chocolate? Certainly not the Germans, who produce 4x as much chocolate as the Belgians (who are arguably more famous for it), according to my next stop: a Chocolate Museum associated with the Lindt chocolate factory. Although there’s some speculation most of both are bought by tourists. Guilty. At any rate, we had been to a chocolate museum in Bruges last year and the reviews on TripAdvisor for this one were pretty mixed, but I decided to check it out anyway and am glad I did.

Cocoa beans essentially only grow in the tropics, between the 20th parallels on either side of the equator. About 70% of at comes out of Africa, specifically the Ivory Coast, Nigeria and Ghana; then; Brazil, Ecuador, Indonesia, and Mexico. Much of the work is done by small families who’ve been doing it for generations. The museum had some interesting information about the socioeconomics of the industry, including this sad nugget: “In general, those who cultivate and harvest the cocoa never have the opportunity to enjoy the end product – a bar of chocolate. Experts estimate that approximately 75% of cocoa farmers and their families have never tried a piece of chocolate….while the cocoa producers are often among the world’s poorer countries, cocoa is primarily imported by rich, industrialized Western countries.

The factory was fun to watch, with some images looking unironically like a certain “I Love Lucy” episode. 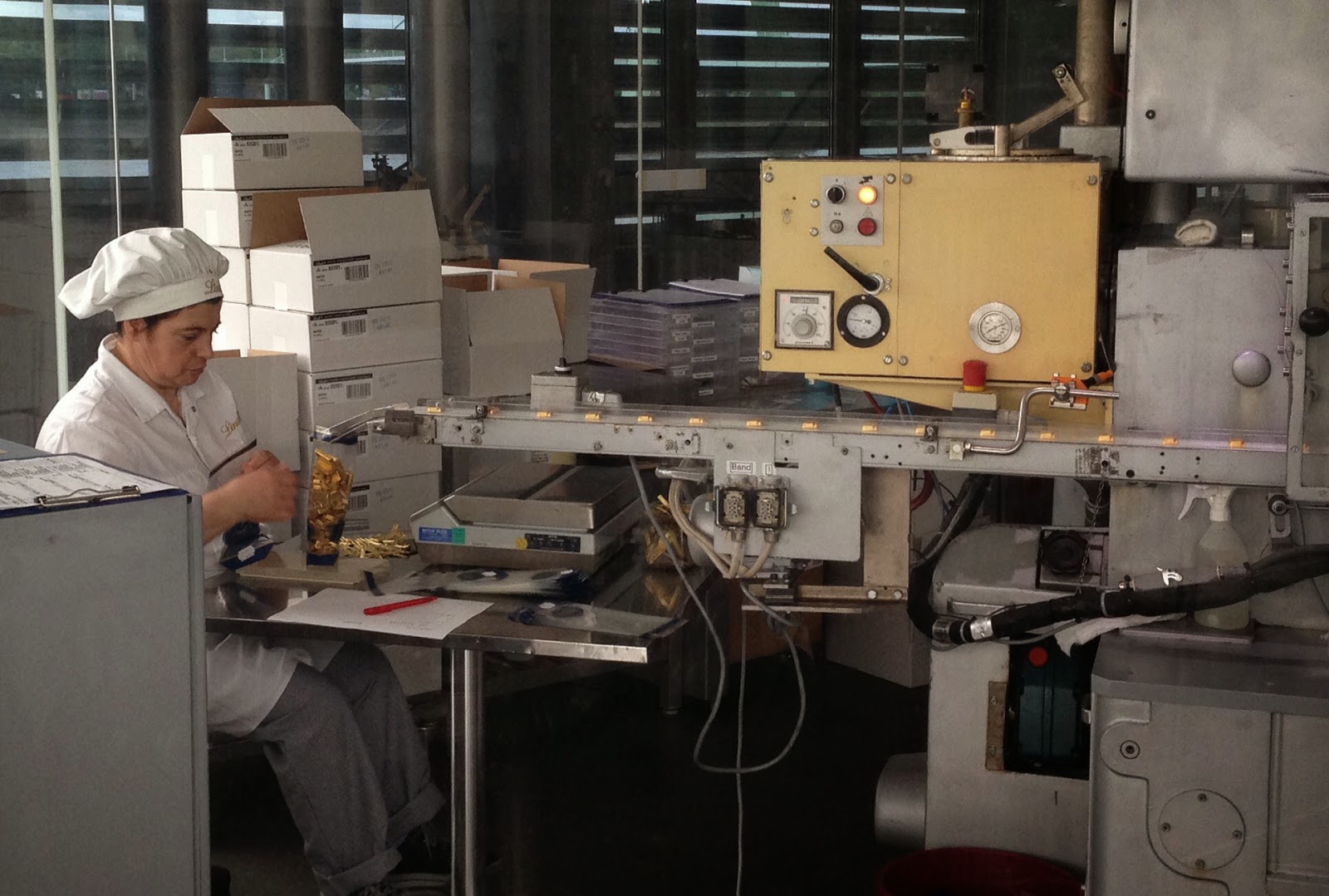 Sometimes it’s the little things that gets my attention. In this case foil. They went into a fair amount of detail about why foil became “the” thing to wrap chocolate in, starting in 1911, none of which I’d ever thought about: foil is impermeable to vapor, water and aroma, helping maintain longer shelf life; is light weight and easy to form around all kinds of shapes. Imaging your Easter chocolate bunny wrapped in paper, the primary choice prior to foil. Not quite the same.

Thee was a also a display of foil art – how well prepared the foil had to be first to make sure that bunny isn’t cross-eyed or something. Like I said, it’s the little things. 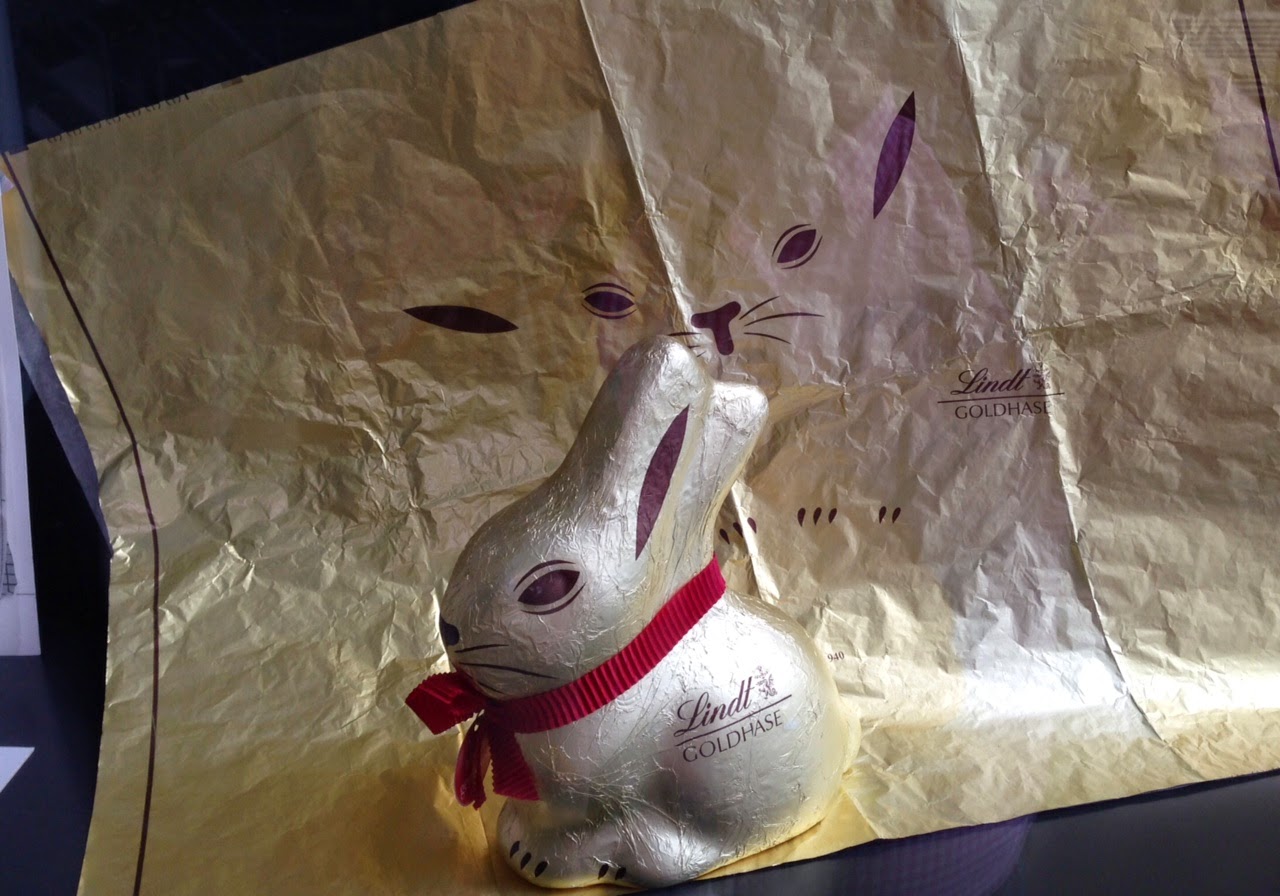 I had narrowed my second museum choice (I will rarely do more than 3 in one day) to one of 3, and ended up picking the first one I ran across. It was the Museum Ludwig, a modern art museum.

You know the saying about the definition of insanity: doing the same thing over and over expecting different results? This describes my relationship with modern art museums. I feel like I’m “supposed to” like them, that if I keep going, maybe this time it will be different and I’ll finally “get it.” Well, that certainly didn’t happen this time. What it did do was cement my preferences: I probably like history museums the most; if it’s going to be an art museum, the majority of the collection needs to be no later than 1920 otherwise I just walk around going “WTF?”

This was one of the latter. There was a special exhibit going on, of the artist Pierre Huyghe, “a major figure in the French and international art scene…redefining the notion of art and the exhibition-format since the 1990s.” I went there first. It was the epitome of everything I don’t appreciate about modern art. I’m walking towards the entry of the exhibit. This guy is standing in the middle of the opening to the hall reading a book. As I walk by he says something to me in German, saw the confused look on my face and says in English “what’s your name?” I told him and he turns around and yells into the hall “STEVE”. I was just like “okaay….” and kept walking. When I got some decent light (the first displays were very dark) I opened up the exhibition guide and this is what I read: “A young man stands at the entrance to the exhibition space and asks each individual visitor for his or her name, in order to announce it when the person enters. (1) Name Announcer (performance) makes visitors aware of their presence in an unfamiliar space that is inhabited by other actors, objects, and visitors and thereby negates the anonymity typically experienced in the museum. The focus of attention is thus shifted from the artworks to the relationship between them and the visitors, as well as between the visitors themselves.” It went downhill from there.

Thankfully, the permanent collection was more palatable.The Ludwig has the 3rd largest collection of Picasso’s work in the world (1 and 2 being Paris and Barcelona). Two rooms, one full of paintings easily identified as his if you’re familiar with his work, another of work he did in ceramic – painted plates, bowls, vases. If I knew he’d worked in that medium I’d forgotten. I liked them. They also had a nice collection of German Expressionists. Most of the rest of it fell into the Dan Joo determinant of what belongs in a museum: “If I can do it, it doesn’t belong here.” Just to give you an idea, these were typical of what I don’t get about modern art:

You weren’t supposed to take pictures, and I didn’t, but I just pulled this off the website. See, I don’t make this stuff up. 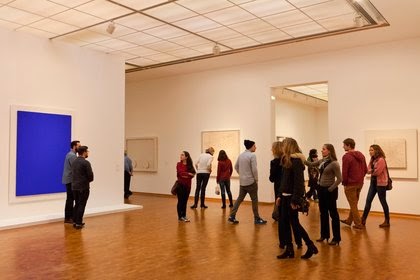 Let’s see if I remember this lesson in Paris.

I had lunch at the other German bakery chain here, Merzenich. Just a quiche Lorraine and a much needed Diet Coke, although here it’s called Coke Light. Same silver background. There was a cute little gelato place around the corner and that was very nice to top it off.

The final stop for the day was the National Socialism Documentation Center. If it wasn’t for TripAdvisor I would have never known about it, but it was listed as #8 of all attractions in Cologne, and also on the “off the beaten path” list. It was the #1 thing I wanted to do, but it was west of the hotel and everything else was east, so I saved it for last.

And it was off the beaten path in a non-descript building. If I wasn’t really looking for it I would have missed it easily. 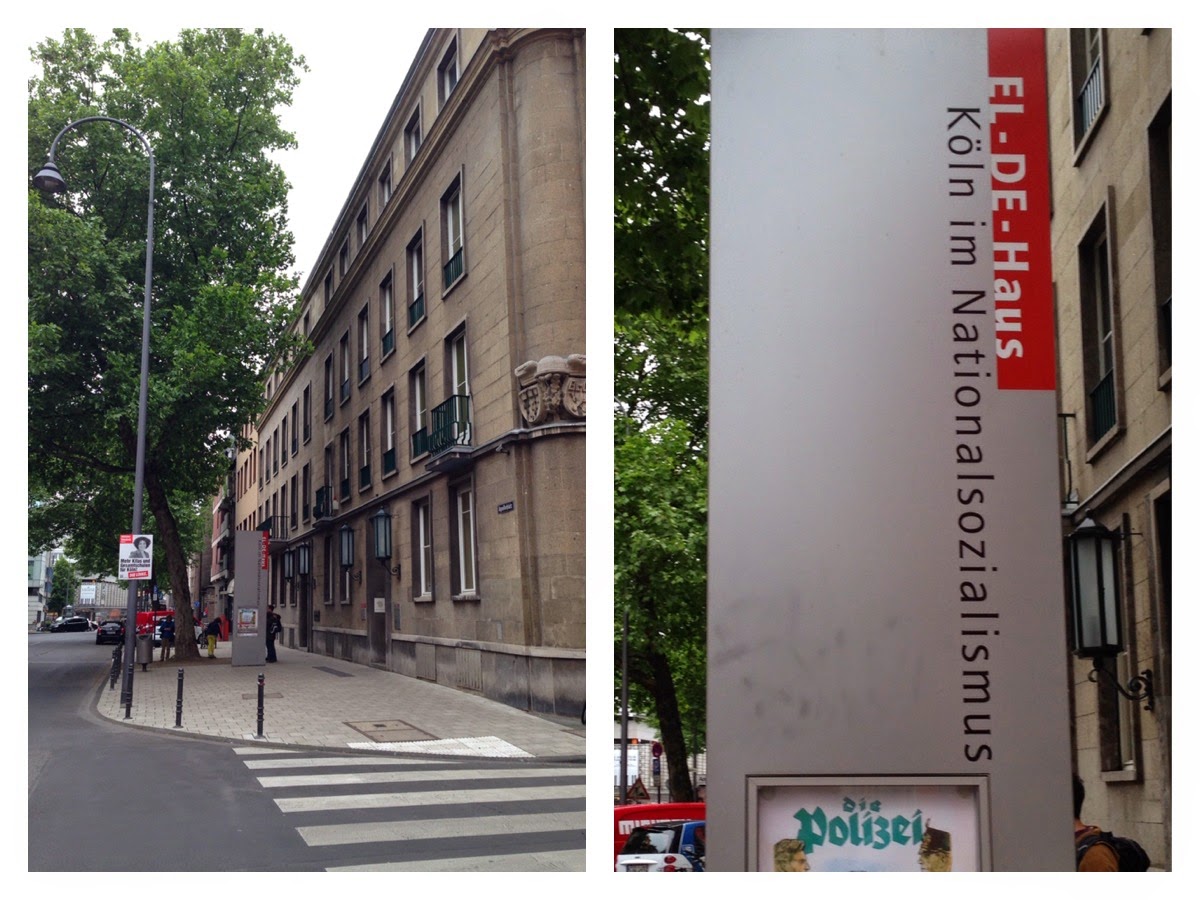 From 1933 – 1945, this housed the Gestapo unit in Cologne, its offices and prison. Because the Germans are embarrassed about this part of their history, it was converted to government offices after the war. A young German discovered it in 1979 and waged a very public campaign to get it restored as a remembrance; that process took about 10 years, but it has been a museum since 1989.

I was here for a couple of hours and could write a lot about it, but this is already long today so I’ll try to be brief. This is the first time I’ve been in something related to WWII in Germany, so the German perspective on it was the most interesting to me. Here are a few things I learned or was reminded of:

Remember the pictures of the cathedral from the war yesterday? I was able to get a couple of more taking pictures of photos in this museum, including one of the bridge from earlier in today’s blog after the Allies bombed it in March of 1945. It was considered Germany’s link to the west. 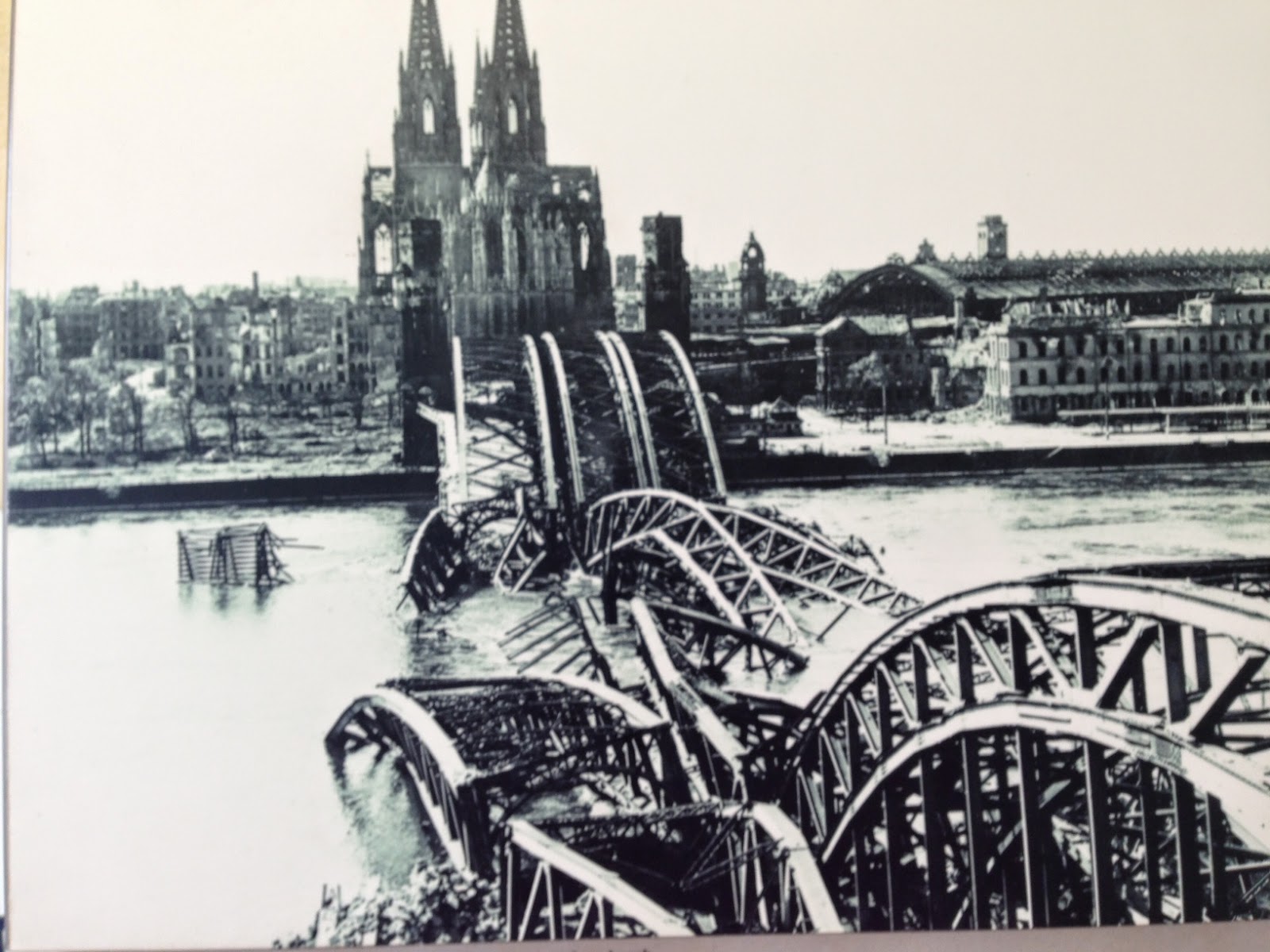 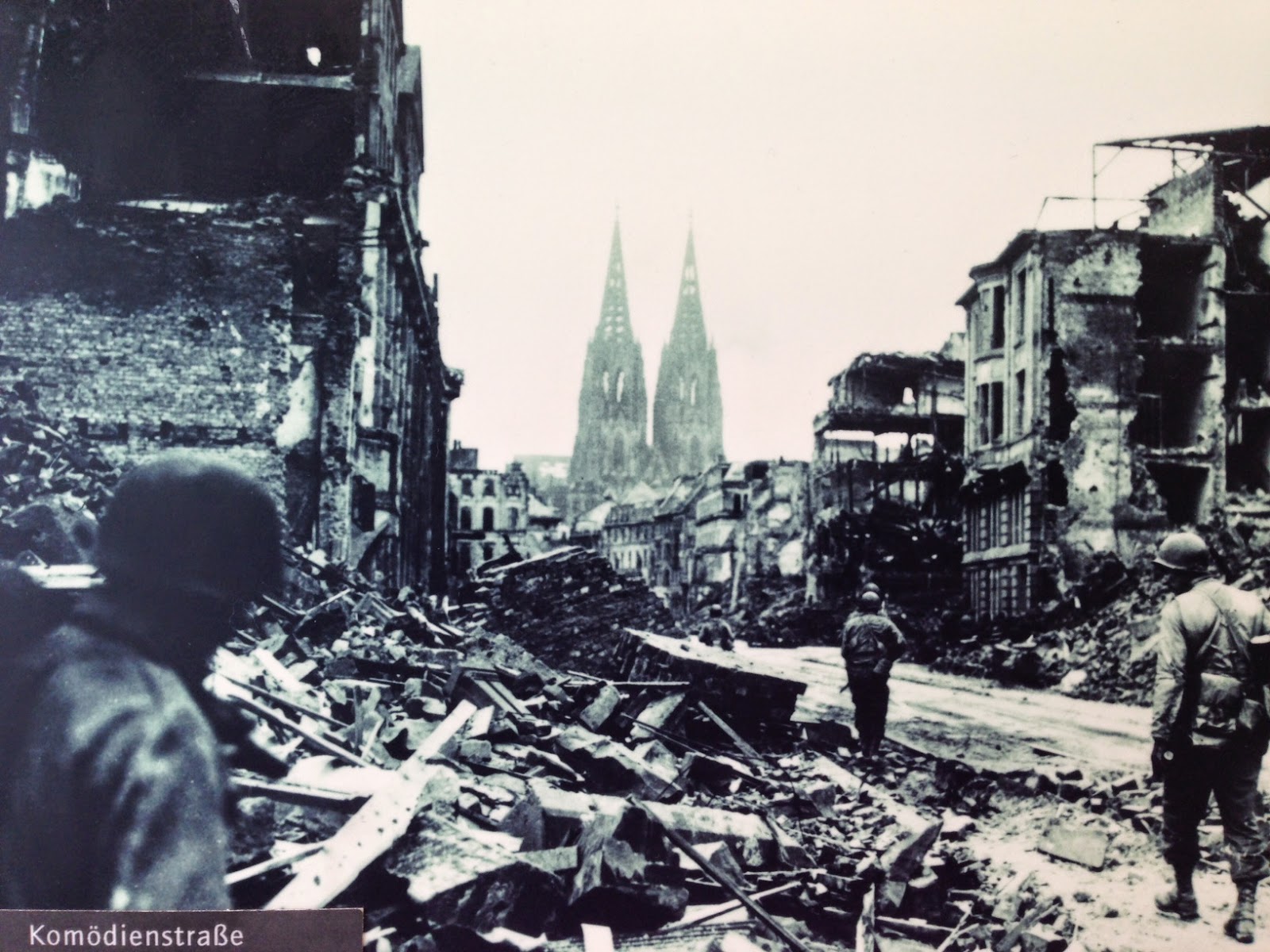 I am registered to vote as “unaffiliated” for many reasons which I won’t get into here. But I get highly annoyed when members of either of America’s primary political parties start slinging Nazi and Socialist names at each other – and they’ve both done it, doesn’t matter which side is sitting in the White House. We do some stupid things politically, both sides. But nothing comes close to what happened in Europe during this period. Words matter, and rhetoric and hyperbole shouldn’t be used to scare the masses and fuel the fires of hate, especially when said in complete ignorance of their true meaning.

I rested in the hotel for a little while then went back out and walked around other neighborhoods farther away from the Centrum. I found the bistro we had lunch at last year that we really liked, and ended up going there for dinner – a taste of a couple of German noodle dishes and apple strudel with vanilla sauce for dessert. Very tasty, reasonably priced, adorable ambiance, gay owned. Can’t beat that.