For some reason I am always a little ambivalent about blogging for these more local trips. I think maybe it’s because they’re shorter, and/or I think people won’t be interested, and/or I get in a lazy mood and don’t want the work. It is vacation after all, right?

And then I remember a little jaunt to Richmond, VA, Memorial Day Weekend of 2016, which I chose not to blog and have regretted it ever since. Because in the end, I enjoy having the memento. It’s really the only thing we take with us from our travels. I don’t know if you’ve ever noticed, but in all of the places we’ve gone, we’ve never bought anything: not a t-shirt, magnet, piece of art, or chochtke of any kind. THIS is our souvenir. This is what we bring back.

So here we are. A little catch-up on us is in order I guess, although there isn’t really that much to report since our last trip to Europe which ended July 8. If you’ve been following for awhile, you know Dan and I are living apart – me in Sacramento, him in Raleigh, NC – while we wait out this limbo of his job status with Bayer while they make progress on their acquisition of Monsanto. So while we have news, there’s no real status change: the limbo will continue for awhile. And the news is that when the deal is final, and that date keeps getting pushed out, currently late first quarter 2018, Dan will be one of 1800 Bayer employees who will be divested to another German company called BASF. If you’re interested in that kind of business news, you can read more about it here.

The limbo part is two-fold. One, if somehow the Bayer-Monsanto deal collapses, which is unlikely at this point, then the divestiture doesn’t happen. If it all goes as planned, then Dan and his team will become BASF employees and that’s then essentially like starting a new job. Because BASF is buying the whole shop, there’s no need to move at the moment – everyone, at least in Dan’s immediate world, stays where they are and the signs on the buildings change. But we don’t yet know how it will impact Dan’s day-to-day: who he’ll report to, whether he’ll like it, how much if any he still needs to travel to Europe for business, etc. So while we’re waiting for all that to settle, it still doesn’t quite make sense for us to get me to Raleigh, because we don’t know how long all that will take. And there’s a whole bunch going on in my job right now that would make it less than ideal for them to have to take on a search for a new HR Director, and I’m interested in seeing some changes I’m driving there through to the end. So we wait some more.

When we first started talking about traveling for Christmas way back when, this trip was originally this cool concept of Madrid-Lisbon-Marrakesh. But we wanted that to be a longer trip and there was too much unknown in Dan’s job to be able to plan that when we would have needed to. So then it was a Grand Canyon-Sedona excursion. Both of these trips we will still do at some point. But we ended up in LA for a couple of reasons. One, way back in 2012 before we started blogging, we had a 2 week trip planned in LA in December of that year that we had to cut short 2 days into it because of an emergency at Dan’s work. Starting with our trip here last year heading into New Year’s, we’ve been working our way through the list of things we’d planned to do then but never did. This is a continuation of that. Plus Dan’s family is here and it gives us a good excuse to see them a bit.

Friday, 12/22, was our departure day. I drove (rented a car this time for a variety of reasons) and got to the room about 5pm. There was plenty of traffic all the way down, lots of holiday travelers, but I made satisfying time. I only stopped once in Kettleman City (because you kind of “have to” stop in KC in my opinion on that trip) to get gas, use the restroom and get a quick bite to eat. I was on the Grapevine around 4pm and hit some rush hour traffic after that. We are staying at a Hilton in Glendale, which is north of LA proper.

We have a nice room! I took these just as I arrived so I could grab them before the sun set completely. 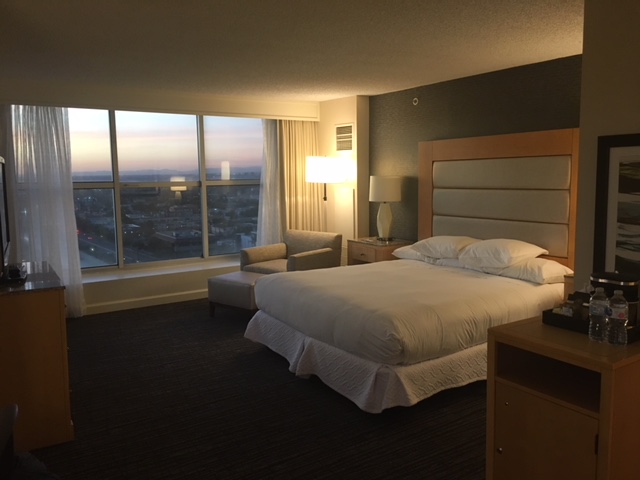 This is sort of from the doorway as you walk in. Bathroom to the right out of view, the desk area, pictured below, is to the left of where I’m standing in the above photo. 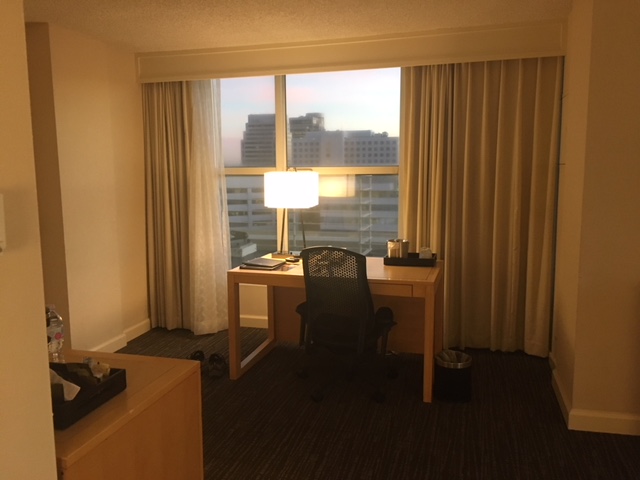 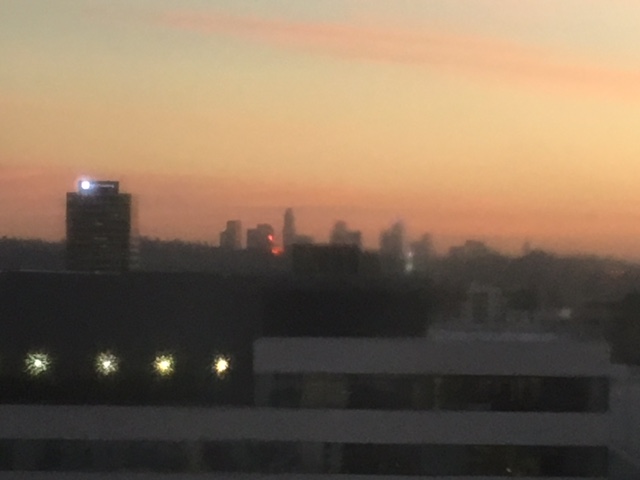 Downtown LA in the distance, that’s looking south. And caught a bit of a nice sunset over the mountains to the west, below. 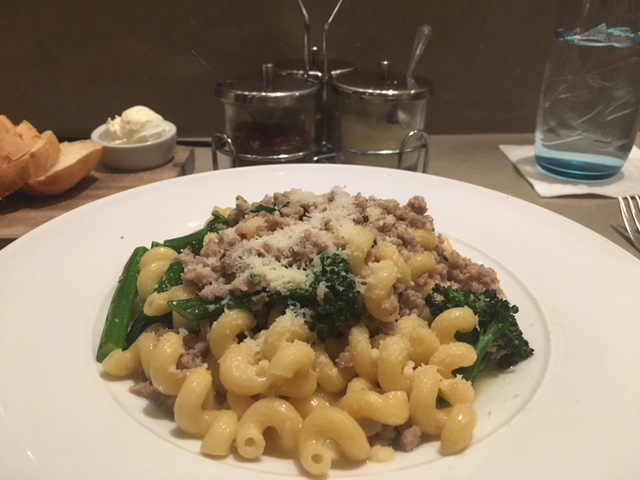 I unpacked, went to the gym to get some cardio in and stretch the legs after 5.5 hours of driving. Showered after and just went down to the hotel restaurant for dinner because I did not feel like getting in the car again. The restaurant seating is bizarre – more just like a bar/lounge area. Will be interesting to see if it’s the same for breakfast. There weren’t any traditional tables or booths, just counters and couches and some of the high bar tables. But the food was decent, a pork sausage pasta dish above with a simple garlic sauce and some broccoli.

Dan worked most of the day and had a direct flight to LAX which landed him here just after 9:30. I left about 8:45 to go get him. Apparently everyone and their mother flew into LAX Friday night because traffic was a joke, with a 27 minute delay for just the mile getting into the airport on the freeway. I ended up getting off the freeway one exit early and the google reroute ended up being faster if not more direct shot (very circuitous) shot, but at least I didn’t have to sit in the parking lot that was the freeway. And lots of people must’ve taken that because there was no other good reason for me to be following as many cars as I was going through the bowels and back alleys of LAX. It was kind of bizarre.

We have a nice little stay planned, starting with hanging out in the Glendale/Pasadena area this weekend. We have dinner with this family tonight in Koreatown. Monday, Christmas Day, will be movie day (Jedi & Churchill). Tuesday is Warner Brothers Studios, and Wednesday we head south the explore the Long Beach area. Dan flies out Thursday morning and I’ll drive home that day, still giving us both nice 4 day weekends to wind down the year. I haven’t taken this particular week off (“the week in between”) in over 10 years and am super-excited about it.
[PS: Weird things going on with the font, I know. Working on it…]